Actress of stage, TV and movies Barbara Rush was born on January 4, 1927 in Denver, Colorado. 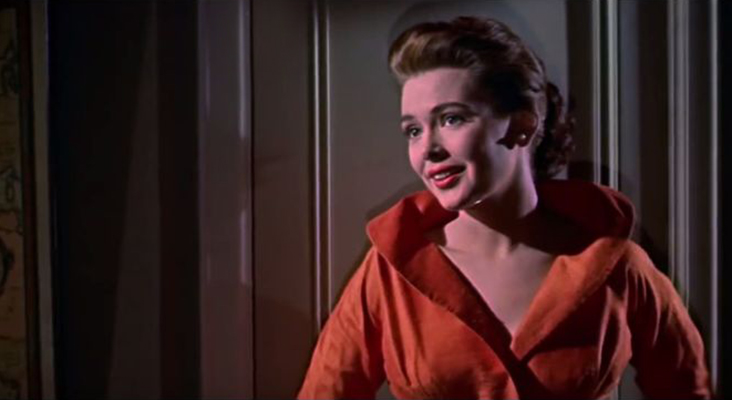 Barbara Rush graduated from the University of California, Santa Barbara in 1948, and told Cinephiled in 2015 that her early career aspirations were humble:

“I was never really that ambitious — that was sort of a problem I had! …When I was younger, my plan had been to go to New York and wait tables and do theater. I got a scholarship at the Pasadena Playhouse after college and did many plays there. This was not long after the war so there were many actors who were there on the G.I. Bill. So in my class at the Pasadena Playhouse there were about 12 guys and I was the only girl. I got every female part.“

A talent scout from Paramount saw 19-year-old Barbara Rush at the Pasadena Playhouse and had her do a screen test; a contract with Paramount Pictures promptly followed. Rush would continue perform in plays throughout her career and formed a fast friendship with actor Anthony Perkins while acting in New Jersey summer stock.

Her first movie role was a small part in the comedy The Goldbergs/Molly (1950), along with actor Peter Hansen (later Lee Baldwin on General Hospital). The following year, Peter Hansen and Barbara Rush had graduated to co-starring roles in the sci-fi thriller When Worlds Collide (1951) with John Hoyt. Hayden Rorke and Stuart Whitman both had small parts in When Worlds Collide. 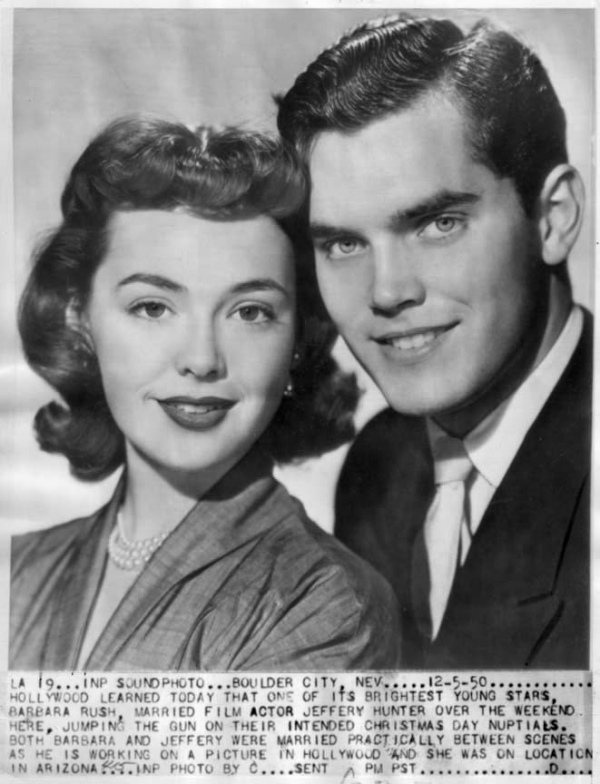 In Famous Wisconsin Film Stars (2002), author Kristin Gilpatrick notes that young actor Jeffrey Hunter had first noticed Barbara Rush at a Paramount screen test. Jeffrey Hunter asked Barbara Rush to marry him on their second date, and a few months later, when they were in different countries filming movies – Rush was filming the western Flaming Feather/Devil’s Canyon (released 1952) – they decided to elope. Barbara Rush and Jeffrey Hunter were married on December 1, 1950 (the first marriage for both of them), and returned to filming after a 2-day honeymoon.

Their son Christopher Hunter was born August 29, 1952; soon after Jeffrey Hunter left for England to film another movie.

Also released in 1953 was the period adventure movie Prince of Pirates, starring Barbara Rush and actor John Derek. Off screen, Barbara Rush and husband Jeffrey Hunter counted her former co-stars Peter Hansen, John Derek and his wife Patti Derek, Debbie Reynolds, and Robert Wagner among their friends. In 1961, John Derek and Barbara Rush were reunited onscreen in an episode of the TV series Frontier Circus 1961 with Chill Wills and Brian Keith.

Of Rock Hudson and filming Taza, Son of Chochise, Rush told Cinephiled that

“We had a lot of fun on location even though it was really hot. Oh, I just loved Rock. I remember on that film he was always playing Doris Day records, he loved her even though he didn’t know her yet. I was so happy when they got to work together and, of course, she really adored him. But on Taza we’d just giggle all day long. My Indian name was Oona and he’d always call me ‘Oona, dos, tres.’ We’d just scream with laughter!“

Barbara Rush and Jeffrey Hunter were divorced on March 29, 1955; both said it was time spent apart pursuing their separate acting careers that had effectively separated them and ended their marriage. Two years later, Barbara Rush and her ex-husband Jeffrey Hunter were co-stars in the drama No Down Payment (1957), along with Joanne Woodward, Sheree North, Tony Randall, and Pat Hingle. Jeffrey Hunter died in May 1969 from an intracranial hemorrage, at the young age of 42; he left his third wife  (of just 3 months) Emily McLaughlin (Jessie Brewer on General Hospital) a widow.

Although Barbara Rush was rarely seen on television during the 1950’s and early 1960’s, she did appear twice on the popular series Playhouse 90 in 1957 and again in 1960. Her costars on Playhouse 90 included Robert Vaughn, Rita Moreno, Don Murray, and Burt Reynolds, among others.

In a 2-part episode of Sunday Showcase in 1959, Barbara Rush co-starred with Dina Merrill and John Forsythe. When she guest-starred on Police Story 15 years later in 1974, Rush and John Forsythe were reunited onscreen.

Other movies of note for Barbara Rush during the 1950’s included:

That same year, Walther Matthau and Barabara Rush co-starred in an episode of Our American Heritage with Tom Clancy, Farley Granger, and Robert Redford in a rare TV appearance.

Their second film was the musical comedy caper Robin and the 7 Hoods (1964) starred Frank Sinatra, Barbara Rush, Dean Martin (his 3rd movie with Rush), Sammy Davis Jr., Bing Crosby, and Peter Falk. Filming of Robin and the 7 Hoods took place in November-December 1963, and Frank Sinatra almost backed out before it was finished because of the November 1963 assassination of his close friend, President John F. Kennedy; followed a couple of weeks later on December 8, 1963 with the kidnapping of his son Frank Sinatra Jr. When asked if she ever got to keep the costumes from her movies, Barbara Rush told cinephiled in 2015 that

“Every time I worked with Sinatra, he always said to me, ‘The clothes are yours!’ And those were really expensive clothes, let me tell you, particularly Robin and the Seven Hoods. So beautiful! Frank was always a man of great emotion and impulsive action!“

Barbara Rush and Frank Sinatra in a scene from Robin and the 7 Hoods, below.

In the western Hombre (1967) starring Paul Newman, Martin Balsam, and Fredric March, Barbara Rush played the wife of Fredric March’s character. Much of Hombre was filmed on location in Arizona; the movie was critically acclaimed. Hombre was a reunion for Paul Newman and Barbara Rush, who had co-starred in 1959’s The Young Philadelphians.

The feature film mystery Strategy of Terror (1969) co-starring Barbara Rush, Hugh O’Brian, and Neil Hamilton was recycled from a two-part episode of Kraft Suspense Theatre (1965) “In Darkness, Waiting“. Hugh O’Brian and Barbara Rush had previously appeared in the western movie Taza, Son of Cochise in 1954.

Two of the made-for TV movies Barbara Rush co-starred in during the 1960’s included The Unknown (1964), a sci-fi horror movie with David McCallum and Vera Miles; and Dateline: San Francisco (1962), with Rod Taylor. 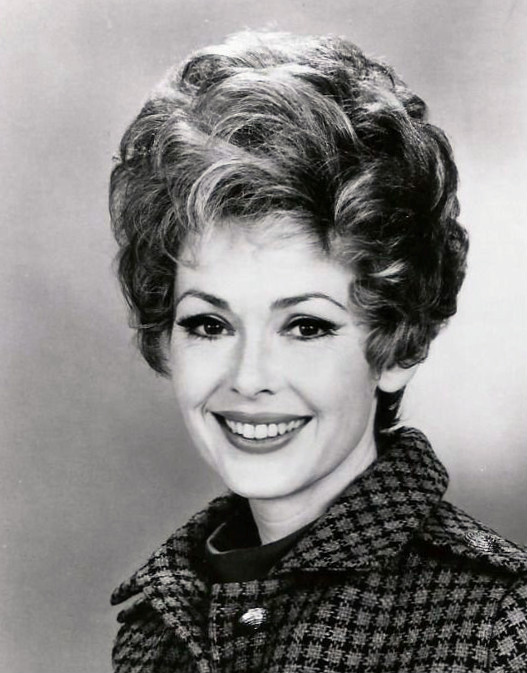 From 1968-1969 Barbara Rush was a cast member on Peyton Place (seasons 4 and 5) as Marsha Russell. She appeared in over 75 episodes of Peyton Place with other regular cast members Dorothy Malone, Ed Nelson, Ryan O’Neal, Barbara Parkins, and Robert Hogan as the Rev. Tom Winter.

As the 1960’s ended and the 1970’s began, Barbara Rush ended one relationship – she got divorced from Warren Cowan in August 1969 – and began another – marrying sculptor Jim Gruzalski in 1970. Jim Gruzalski and Barbara Rush had no children and were divorced in 1973.

During the 1970’s, Barbara Rush’s film work began to shift heavily towards television vs feature films. She did appear in a few big-screen movies, including The Man (1972), a political drama co-starring James Earl Jones, Martin Balsam (her co-star from 1967’s Hombre), Burgess Meredith (a co-star from a Batman episode), and George Stanford Brown.

Baby boomers are most likely to remember Barbara Rush from her many TV movies during the 1970’s:

The Eyes of Charles Sand (1972), a thriller co-starring Peter Haskell (Bracken’s World), Sharon Farrell, Bradford Dillman, and Adam West. Sharon Farrell and Barbara Rush had been co-stars when Rush had a recurring role as Lizzie Hogan in 4 episodes of the TV series Saints and Sinners between 1962-1963. Their Saints and Sinners co-stars had been Lola Albright, Gary Lockwood, Glynis Johns, Elizabeth Montgomery (Bewitched), and Ed Nelson (a Peyton Place co-star as well).

The Last Day (1975), a western in which she played the wife of actor Richard Widmark. The Last Day co-stars included Robert Conrad, with Richard Jaeckel, Tim Matheson, Tom Skerritt, and Loretta Swit.

Other episodic television work for Barbara Rush during the 1970’s included appearances on popular baby boomer series Maude, Streets of San Francisco, as well as:

During her 50+ years from 1977 on, Barbara Rush’s senior and baby boomer fans began to see her less frequently on film.

Barbara Rush fans may recall seeing her in several TV and feature film flops (Can’t Stop the Music) during the 1980s. Her last full-length feature-film role was in Summer Lovers (1982), a romantic comedy starring Peter Gallagher and Daryl Hannah.

Episodic television work for Barbara Rush during the 1980’s and the end of her 50+ years included guest-starring work on Murder, She Wrote starring Angela Lansbury, and:

By the mid-late 1980’s, Barbara Rush and her second husband Warren Cowan (who married and divorced third wife Josette Banzet in the early 1970’s), were once again living together. In an interview with the Los Angeles Times, Cowan referred to his household with ex-wife Barbara Rush and their daughter Claudia. Barbara Rush and Warren Cowan married for a second time in 1990 (the fourth marriage for both of them) in 1990. In April 1995, People magazine reported that 65-year-old Barbara Rush had filed for divorce from 74-year-old Warren Cowan after five years of marriage. After their 1995 divorce, Warren married for a fifth and final time; he was an octogenarian senior citizen when he died from cancer in May 2008 at the age of 87.

In 1992 Barbara Rush turned 65 and became a senior citizen, but showed no signs of retiring. In addition to continuing to appear on stage, she took on a 3-month stint that year as Napa Valley vineyard owner Nola Orsini on daytime soap opera All My Children.

After becoming a septuagenarian senior citizen in 1997, Barbara Rush was semi-retired from on-screen appearances. She was in a 1998 episode of The Outer Limits playing the wife of actor Harve Presnell, and had a recurring role as grandmother Ruth Camden on 7th Heaven from 1997-2007, opposite fellow recurring actor Peter Graves.

Septuagenarian Rush told SFGate in 1997 that in addition to her performance that year on stage in The Golden Age (playing 80-year-old Isabel), she had previously appeared in the popular play Love Letters several times, and done a world tour of the one-woman show A Woman of Independent Means. 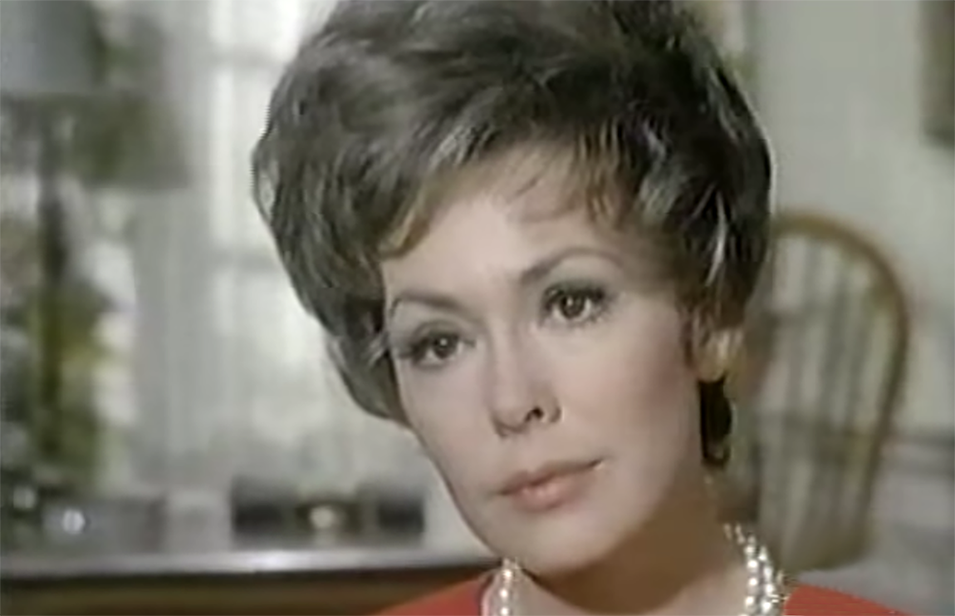 So happy to have met and known Barbara Rush personally in late 1990's. She was one excellent and lovely woman. A Hollywood treasure who was NOT "Hollywood". www.lozzipr.com

Enjoyed the article. My husband worked for Rogers & Cowan when she was married to Warren. I last saw her when she was going to the Curves exercise class. She is such a classy lady. She remembered my husband even though it had been many years since she had last seen him. I wish her all the best.