Other actors have played the cartoon character since, but for boomers and their children who watched Adam West’s on their 1960s TV sets, Adam West WAS Batman. Unsurprisingly, West said that as a child he was fan of comic books and Batman in particular.

Batman actor William West Anderson (Adam West) was born September 19, 1928 in Walla Walla, Washington. He told Independent that when he was 12, he found his mother and the local preacher in bed. His parents subsequently divorced when he was 15.

William Anderson and his younger brother John moved to Seattle with their mother when she remarried. Anderson graduated in 1946 from Lakeside High School in Seattle, Washington.

During his years at Whitman College in Walla Walla, Anderson was a member of the debate and speech team. In August 1950 as he prepared to begin his senior year at Whitman College, he married 17-year-old Billie Lou Yeager. He graduated the next year from Whitman College with a degree in literature and psychology.

Work as a radio DJ/announcer, post-grad courses at Stanford University, and a 2-year stint in the U.S. Army after being drafted, gave young William Anderson some exposure in broadcasting and television.

As William Anderson, he acquired a few television credits on episodes of The Philco-Goodyear Television Playhouse (1954-1955), appearing in a 1954 episode with Eva Marie Saint.

At the suggestion of Walla Walla friend Carl Hebenstreit, he moved to Hawaii in the mid-1950’s. He eventually replaced Hebenstreit as the human star of The Kini Popo Show in 1955, co-starring with a chimpanzee.

In 1959 Anderson moved to Los Angeles, changed his name to Adam West, and got a contract with Warner Bros. at the same time as a another young actor, Van Williams (The Green Hornet), who had also been living in Hawaii in the mid-1950’s.

However, it was mostly work on television that kept Adam West busy from 1959 through 1965. Baby boomers and seniors may remember seeing him in episodes of popular series such as Bonanza, The Rifleman, Perry Mason, Laramie, Gunsmoke, Bewitched, The Outer Limits, and The Virginian. 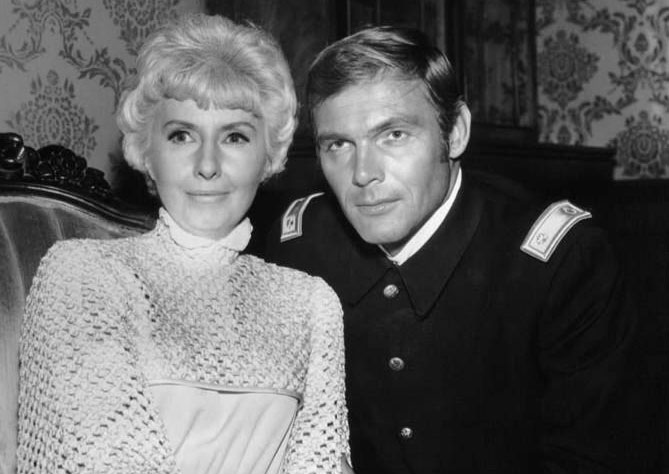 West has said that his mother was an alcoholic. He abused alcohol himself, and was subject to depression. By the end of 1962, Nga Frisbie had left him and their marriage ended in divorce.

A Career as Batman Begins 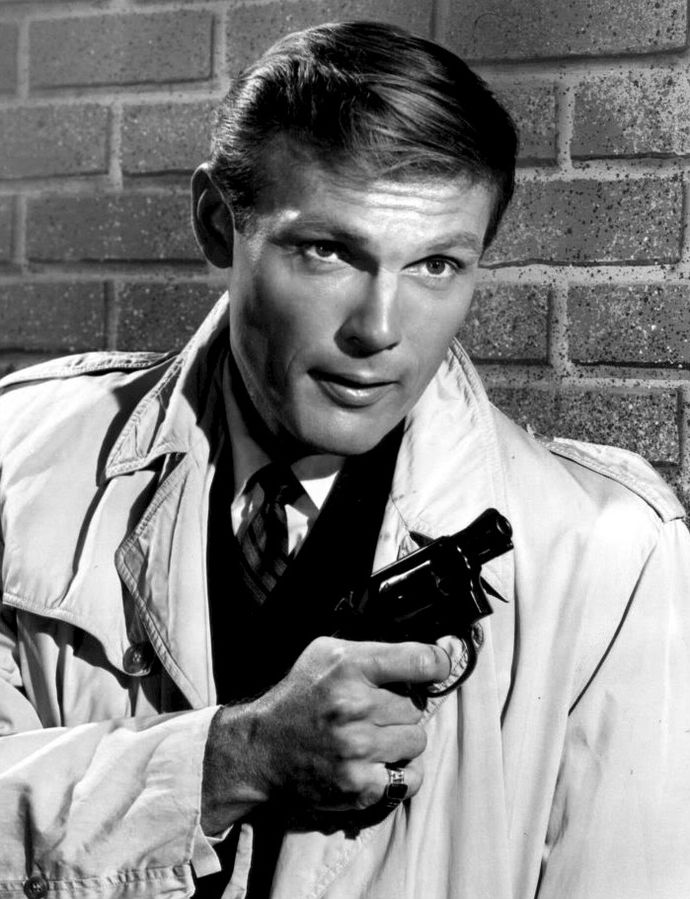 Adam West was a series regular as Detective Sgt. Steve Nelson on The Detectives (1961-1962) starring Robert Taylor, but this exposure didn’t lead to immediate stardom.

In 1965, a spokesperson gig as Captain Q in Nestle’s Quik advertisements caught the eye of a TV producer, leading to West being cast as Batman (1966-1968) in new action series.

While appearing in the Batman television series, West also starred in the feature film Batman: The Movie (1966), released in October 1966.

The cast of  Batman: The Movie had most of the characters/regular cast from the TV show: Batman (Adam West), Robin (Burt Ward), The Joker (Cesar Romero), The Penguin (Burgess Meredith), The Riddler (Frank Gorshin), butler Alfred Pennyworth (Alan Napier), and Commissioner James Gordon (Neil Hamilton). An exception was the role of Catwoman; Julie Newmar was unavailable and so Lee Meriwether played Catwoman in the film.

During the filming of Batman‘s 120 episodes, Adam West’s friend Van Williams (The Green Hornet) and Bruce Lee (Kato) appeared in three 1967 crossover episodes as their Green Hornet characters (The Spell of Tut, A Piece of the Action, and Batman’s Satisfaction). 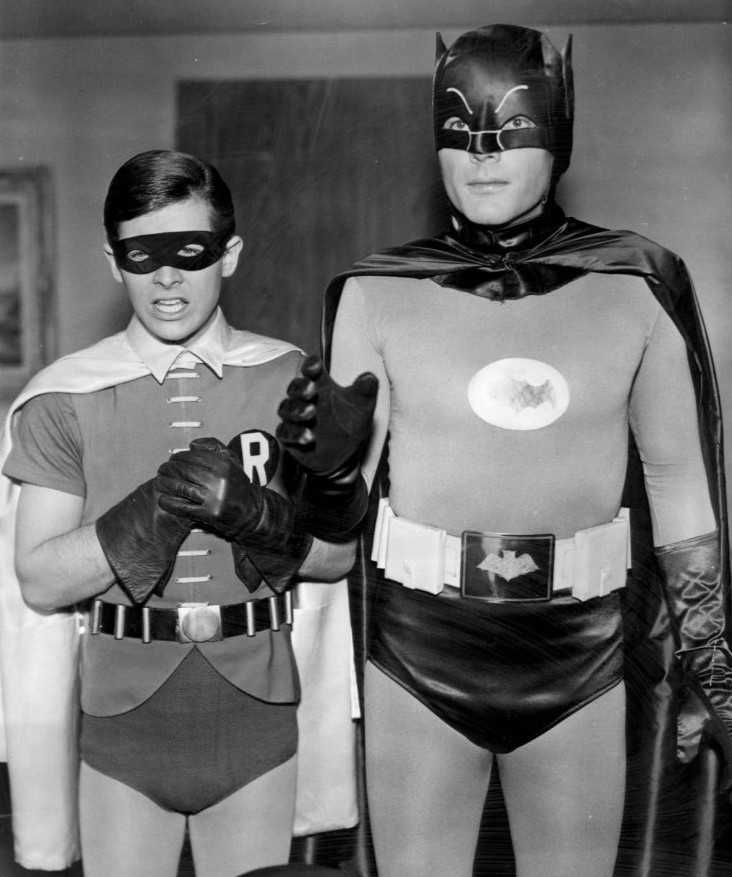 Both Adam West and his co-star Burt Ward said that the heights of fame and attention from women they enjoyed while Batman was on the air encouraged a “party” lifestyle off camera, with hard drinking and sexual escapades.

Despite their on-air camaraderie in Batman and enjoyment of women and partying, West and Ward didn’t always get along behind the scenes; although they maintained a friendship through the years after the series ended.

Frustrated at being typecast by his Batman TV stint, Adam West found work almost impossible to find after the series went off the air. Depression set in and his drinking escalated.

He told People that while he was still on Batman, he’d made a personal appearance in his Batman costume and posed for a picture in 1966 with Learjet executive John Lear and his wife Marcelle Lear. In November 1970, Adam West married the now-divorced Marcelle Lear and became step-father to her two children, Moya and Jill Lear. He credited Marcelle with helping him overcome his alcoholism during the 1970’s. The couple had two more children, daughter Nina West (b. 1976) and son Perrin West (b. 1979).

Adam West did find some acting work during the 1970’s, and could be seen in co-starring roles in a few films:

His bread and butter work however, remained personal appearances and cameos as his Batman character. Both Adam West and Burt Ward voiced the animated characters of Batman and Robin respectively, on the animated series The New Adventures of Batman (1977-1978).

During the 1980’s, a now 50+ Adam West’s most notable roles were in independent movies and on television. He was Captain Rick Wright in The Last Precinct (1986) series. His co-stars on The Last Precinct included Ernie Hudson as Sgt. “Night Train” Lane, and Keenan Wynn as Butch. 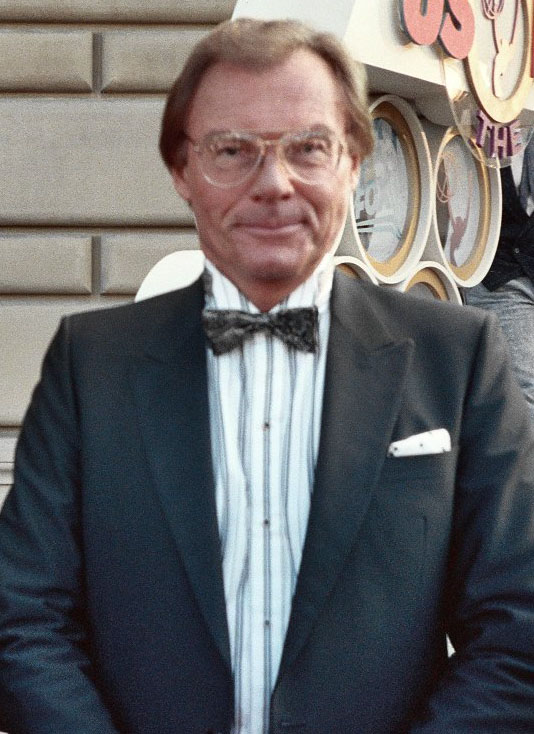 In 1988 Marcelle and Adam West moved to Ketchum, Idaho, where he was able to fish and hunt with old friend and new neighbour Van Williams. West kept a home in Palm Springs as well.

From the 1990s on, Adam West capitalized on voiceover work. He voiced Mayor Adam West on the animated series Family Guy from 2000-2018.

Nostalgia fans and younger generations may know Adam West best from his appearances at comic book conventions. West and Burt Ward often appeared at the conventions together, and they co-starred (as themselves) in the biographical comedy-action movie Return to the Batcave: The Misadventures of Adam and Burt (2003).

West made a few guest-starring appearances as Captain Mike Morgan in several episodes of Danger Theatre (1993) starring Robert Vaughn; this was a reunion for the two actors, some, 34 years after they were in The Young Philadelphians (1959).

Adam West is featured in this clip from Drop Dead Gorgeous:

Adam West, Burt Ward, and Julie Newmar reunited to voice their Batman characters one last time in an animated feature film from Warner Bros. and DC Entertainment, Batman: Return of the Caped Crusaders (2016).

West was finally honored with a star on the Hollywood Walk of Fame in 2012, and he and his wife Marcelle celebrated their 46th wedding anniversary in 2016. Adam West died in June 2017 at the age of 88 from leukemia. His autobiography Back to the Batcave (1994) is available from Amazon.

Note: This article was first published in 2016 as Celebrating Seniors – Adam West Is 88. It has been updated with new & additional content.