Update: Joseph Campanella died on May 16, 2018 at the age of 93 from Parkinson’s disease complications 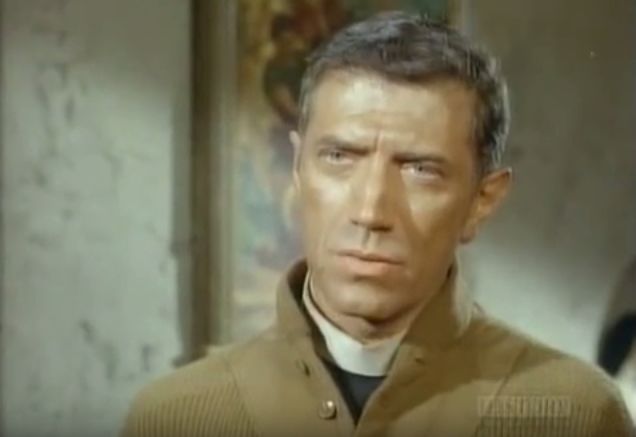 Joseph and his older brother Frank Campanella grew up speaking Italian at home and the family were staunch Catholics. Both Joseph and Frank Campanella served during World War II (Joseph in the U.S. Naval Reserve from 1944-1946) and attended Manhattan College. Frank studied drama and graduated from Manhattan College in 1940 as WWII was beginning, and Joseph graduated in 1948 after the war ended. Joseph Campanella told the Los Angeles Times that he loved baseball as a kid and always had a glove in his back pocket.

“Just in case I ran into a game anywhere“.

Upon graduating from Manhattan College in 1948 with a B.A., Joseph Campanella enrolled at Columbia University in New York for graduate studies. He told Variety about his brother Frank Campanella.

“He always wanted to be an actor and kind of influenced me.”

During the 1950’s, Joseph Campanella found announcing and acting work on the radio as a sportscaster, in commercials, on television, and on stage. His first listed film credit is an April 1952 episode of Studio One in Hollywood, in an episode with Philip Abbott (The F.B.I.) and John Forsythe (Dynasty) – he’d work with both actors again later in his career. More episodic television work followed, and Campanella’s senior and baby boomer fans may recall having seen him in episodes of New York based TV series, such as:

In the late 1950’s, Joseph worked with his brother Frank Campanella on screen again, in episodes of New York Confidential, and Decoy, with Beverly Garland and Barbara Barrie. He’d work again with Beverly Garland several more times, including in an episode of Lancer in 1969.

Joseph Campanella alternated stage plays with television work in the early 1960’s, and was nominated for a 1962 Tony Award as Best Supporting or Featured Actor (dramatic), for his performance on Broadway in A Gift of Time. A Gift of Time was written and directed by Garson Kanin, and starred Henry Fonda and Olivia deHavilland.

As much of the television acting work had shifted to California from New York, Campanella commuted from New York to Hollywood during the 1960’s for guest-starring gigs on television series like: 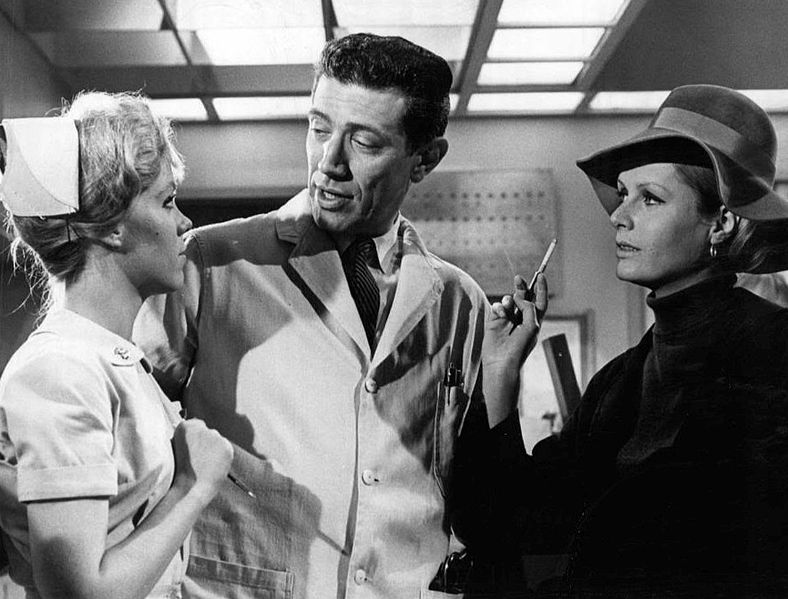 Joseph Campanella had a recurring role as Dr. Ted Steffen on The Doctors and The Nurses from 1962-1965.

Brothers Frank and Joseph Campanalla continued to work together periodically on television and the movies; they were both in the same 1964 episode of Suspense starring Vic Morrow, and were both in the Vic Morrow TV movie Death at the Stock Car Races (1964). Joseph Campanella had first worked with Vic Morrow on screen when he guest-starred twice on Morrow’s series Combat! in 1963-1964.

In the latter half of the 1960’s and early 1970’s, he guest-starred appeared on episodes of popular baby boomer TV series like The Doris Day Show, The Wild Wild West, and Gunsmoke (below). 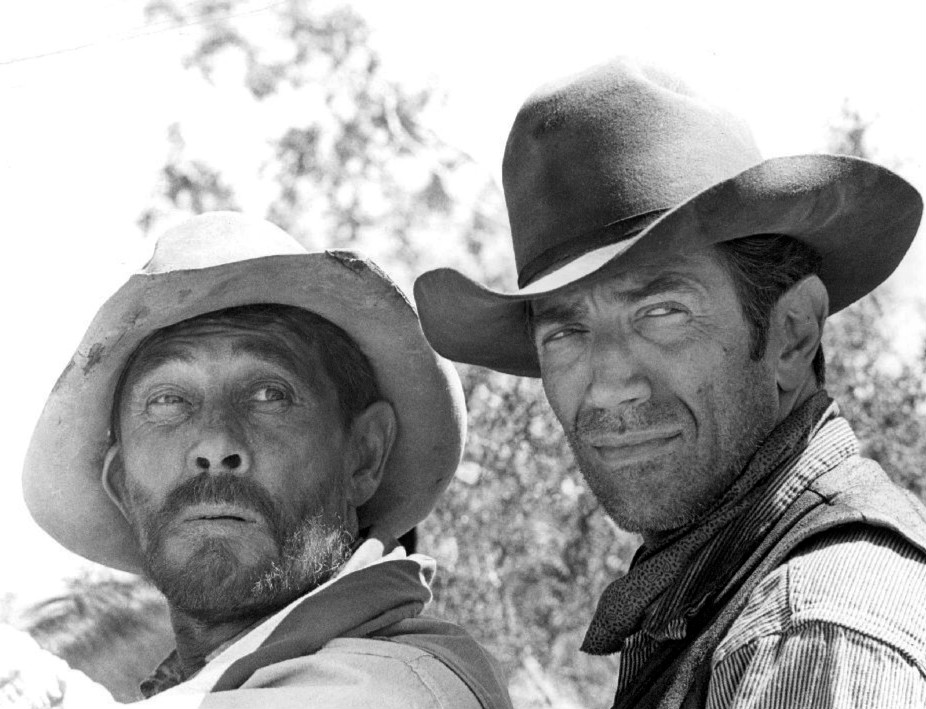 Joseph Campanella had a recurring role as Detective Joe Mannix’s (Mike Connors) Intertect boss Lew Wickersham, on Mannix from 1967-1968. He later returned to Mannix as a guest-star in a 1972 episode, as a surgeon whose life is in danger.

Campanella earned a 1968 Emmy Award nomination for Outstanding Performance by an Actor in a Supporting Role in a Drama, for his work on Mannix.

Joseph Campanella was signed to star in The Bold Ones: The Lawyers TV series as Brian Darrell in 1969. His co-stars on The Bold Ones: The Lawyers from 1969-1972 were Burl Ives and James Farentino. Campanella told the Chicago Tribune that he had an arrangement with Universal Studios that all of his The Bold Ones episodes be filmed in 4 months, and a guarantee of a minimum of 2 guest-starring roles per year in other Universal series such as Ironside, and Marcus Welby, M.D. starring James Brolin. This contract Campanella free to work on other film and stage projects, and he also guest-lectured in drama classes.

Other TV series that Joseph Campanella appeared in during the early 1970’s were McCloud, and Medical Center (in an episode with Cyd Charisse). He worked with familiar names for baby boomer fans of other series, such as:

Campanella was also kept busy with feature films like Ben (1972) with Meredith Baxter, and in TV movies:

In 1974 alone, a now 50+ Joseph Campanella appeared in 10 television and film projects. This frantic pace of work continued throughout the remainder of the 1970’s and 1980’s.

He appeared in 2 TV thrillers with Stefanie Powers – Skyway to Death (1974) with Bobby Sherman, Tige Andrews (The Mod Squad), and John Astin; and Sky Heist (1975) with Larry Wilcox and Shelley Fabares.

Campanella’s Canadian baby boomer fans may remember him best as the host of the educational series Science International / What Will They Think of Next?, from 1976-1979.

From 1976-1982, Joseph Campanella had a recurring role as Ann Romano‘s (Bonnie Franklin) ex-husband Ed Cooper on One Day at a Time. On One Day at a Time his other costars were Richard Masur, Shelley Fabares, Boyd Gaines. Valerie Bertinelli and Mackenzie Phillips played his children on the series. Shelley Fabares and Campanella had co-starred in the 1975 movie Sky Heist.

In this scene from One Day at a Time, Joseph Campanella (as Ed Cooper) walks Valerie Bertinelli (as daughter Barbara Cooper), down the aisle at her wedding.

Joseph Campanella remained a popular guest star on television series, and his baby boomer and senior citizen fans might recall seeing him on episodes of Vega$, Trapper John, M.D., Hotel, The Love Boat, Murder, She Wrote, Dallas, and 21 Jump Street. He also appeared on episodes of:

Movies of note for Joseph Campanella in the 1980’s include:

Updated May 2017: Correction of dates for Joseph Campanella on Mannix.

I have been enjoying the Mannix series for the past few months... (AGAIN)

I enjoyed your character Lew for the past few weeks, to the point that I am now searching for other shows/movies you are in so I can enjoy them... Thanks again for your contributions to the entertainment industry.

If you are ever in the Dallas area swing by for a BBQ.

As a father of eight (and a Catholic too) I will lay out the red carpet for you and your family...

Thanks so much for the wonderful information! Love the shows, movies. and actors from the 50's-70s.

Just looked up Joe Campanella after watching Tattletales too! I wondered if their baby was a girl LOL!

Love the article. Just watched Tattletales with Joe and his wife. What a delightful couple. Thank you for the article.

Just looked up Joe Campanella after watching Tattletales too! I wondered if their baby was a girl LOL!

Glad you enjoyed the article Sue, and happy browsing for more on Senior City. You can register for free for our upcoming monthly newsletter as well by clicking the Subscribe button. That way in future you will be notified of the newest articles (and coming soon, discounts).

Hello Anita,
Thanks so much for your entertaining, and thorough writing style!!
I was looking for some bio info on actor Joseph Campanella, and I came across your "Senior City" write-up on him!!
Tho I JUST found your site tonight, and SO FAR only searched info on Mr. Campanella, It's Great to see & read such a wealth of information on him and his career, and and in turn, cool info on loads of other actors & actresses that worked with him!!
I'm 54, but I'm Really an "old soul," especially on the topic of Entertainment, Films, T.V., and Music!!
When reading Mr. Campanella's bio, I was fondly remembering those stars, movies, & T.V. shows, that I watched as a kid with my parents, grandparents, or just by myself!!! Of course Some of those shows were before my time, but Luckily, All the Great Media Sites, and "Nostalgic T.V." Channels, (i.e.: TCM, YouTube, MeTV, Etc.!!), that we have now, just about anybody Has the advantage to see ALMOST EVERYONE, and EVERYTHING that was ever on the Big or Small screens!!!

Although Many of the Programs & Films Of the Past Few Decades ARE PRETTY GREAT, and Of Course SO MANY of Our Current Film (& Television), Actors ARE Pretty Terrific,...THERE DEFINITELY WILL NEVER BE ANYTHING LIKE SOME OF THOSE COOL SHOWS, HUNDREDS OF WONDERFUL FILMS,....AND ESPECIALLY THE AWESOME, & WONDERFUL STARS THOSE "GOLDEN YEARS!!"

Thanks Again for including ALL of this AWESOME Info on "Senior City!!"
I'll be sure to check-in when I'm researching, searching, or just looking for favorite entertainment topics or Great stars of yesteryear!!

Glad you enjoyed the article Sue, and happy browsing for more on Senior City. You can register for free for our upcoming monthly newsletter as well by clicking the Subscribe button. That way in future you will be notified of the newest articles (and coming soon, discounts).