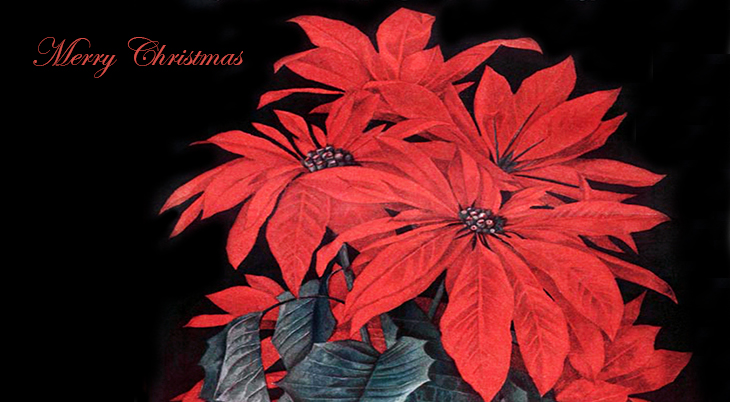 French water color painter Paul de Longpré (b. 1855 – d. 1911) specialized in creating beautiful color illustrations and paintings of flowers for sale in galleries, postcards, and magazine covers (Woman’s Home Companion, Ladies’ Home Journal, etc.). His Hollywood estate (designed by Canadian architect Louis Bourgeois) was reported to be home to 4000 rose bushes and was such an attraction that tours were offered; it was demolished in 1924. De Longpre Avenue and De Longpre Park in Hollywood are named for Paul de Longpré

Talented early 1900s illustrators and painters Guernsey Moore and Herbert Paus each created numerous magazine cover paintings for The Saturday Evening Post and other periodicals. Their Thanksgiving, Easter, and Christmas covers are particularly nice, and each reflects a contemplative mood. 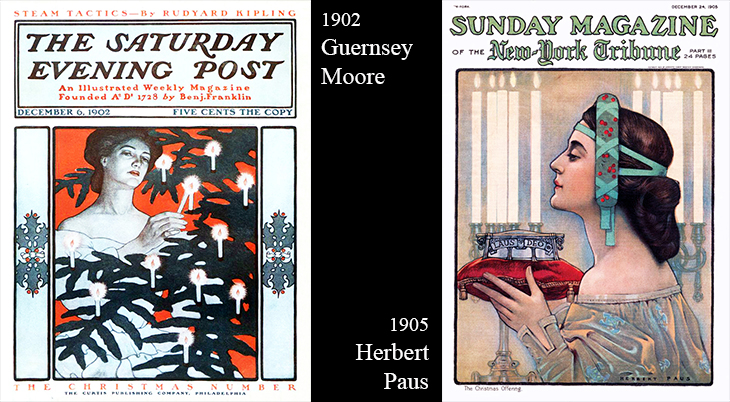 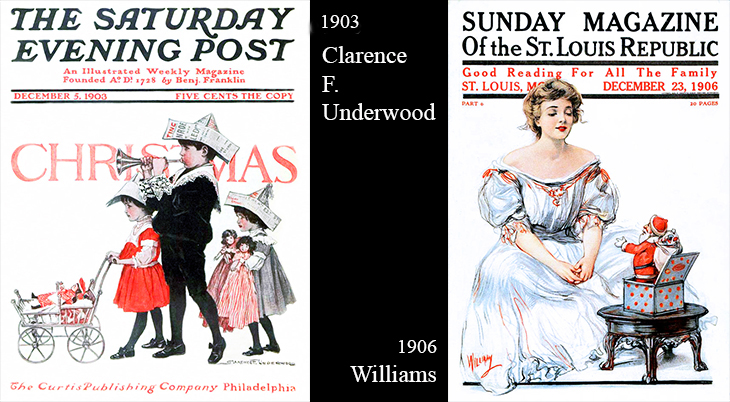 Illustrator Charles Allan Gilbert was born in Hartford, Connecticut in 1873. He studied art in his home state as a teenager, and blazed the trail that Clarence F. Underwood followed – a couple of years at New York’s Art Students League beginning in 1892, followed by a year in France (1894) studying art at the Academie Julien. His works can be found on calendars and posters, as well as the covers and inside of books and periodicals (Harper’s, Scribners, The Modern Priscilla, and many others). During World War I, Gilbert’s illustrations adorned various war effort posters and advertisements. His most famous work is the double image drawing “All is Vanity“. Charles Allan Gilbert died of pneumonia at the age of 55 in 1929. 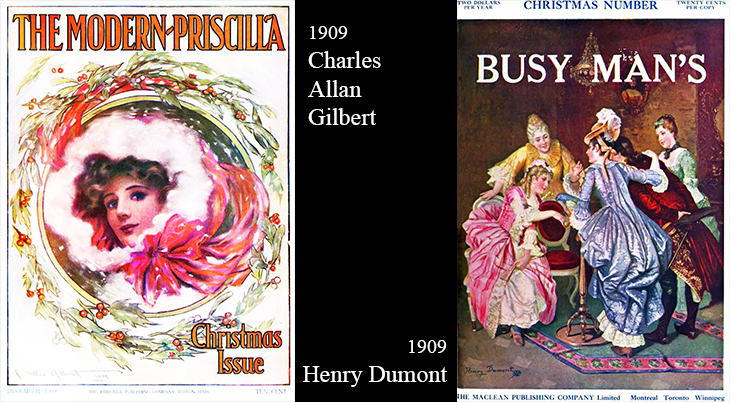 Canadian illustrator and artist Norman Mills Price (b. 1877 – died 1951) first studied at the Ontario School of Art, then lived in London, England and attended the Westminster School of Art, before finding himself at the popular Academie Julian private art school in Paris, France. Back in North America by the 1910s, Norman Price found work as a New York City-based illustrator for magazines such as Cosmopolitan, Woman’s Home Companion, American Magazine, The Century Magazine, Maclean’s, and many others. He illustrated published books for authors (Robert Louis Stevenson; Alexandre Dumas). 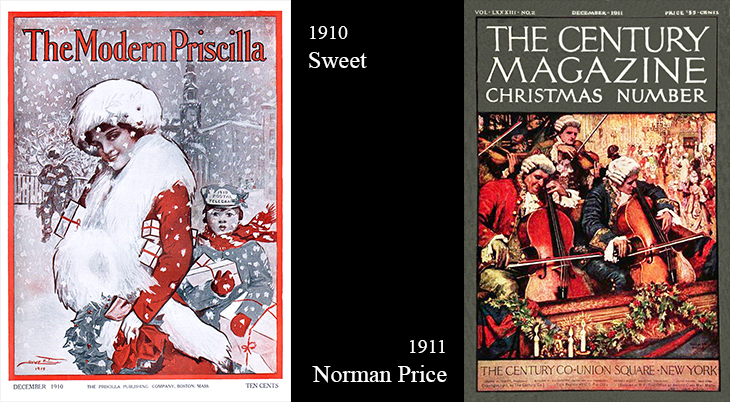 Phillips established his own advertising agency in the mid-1900s before he was hired at Life magazine in 1907. From 1912-1214, he was the sole cover artist for Good Housekeeping magazine. 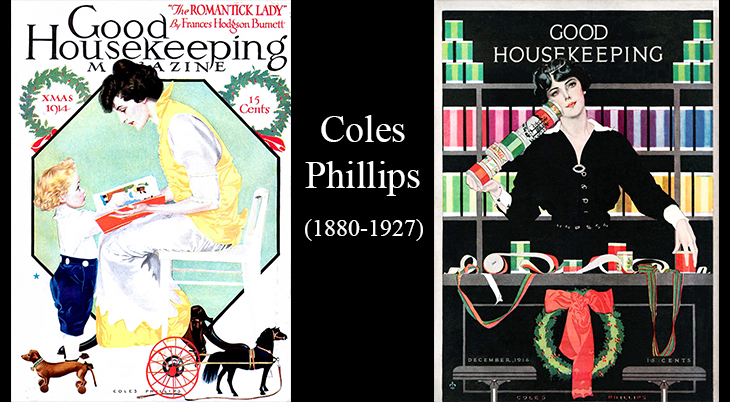 His unique style can also be seen in period advertisements for Oneida Community flatware, Overland Automobiles, and Holeproof Hosiery. Coles Phillips married his frequent model Teresa Hyde in 1910. Unfortunately ill health due to an episode of tuberculosis of the kidney in 1924, began to affect his eyesight and his ability to paint. He was 47 years old when he died on June 13, 1927. Phillips’ friend, fellow magazine cover artist and esteemed graphic designer J.C. Leyendecker, spoke at his funeral.

Born in Boston, MA in 1881, illustrator and painter Maud Tousey Fangel specialized in painting babies for the covers of women’s magazines such as The Ladies Home Journal. She died in 1968. 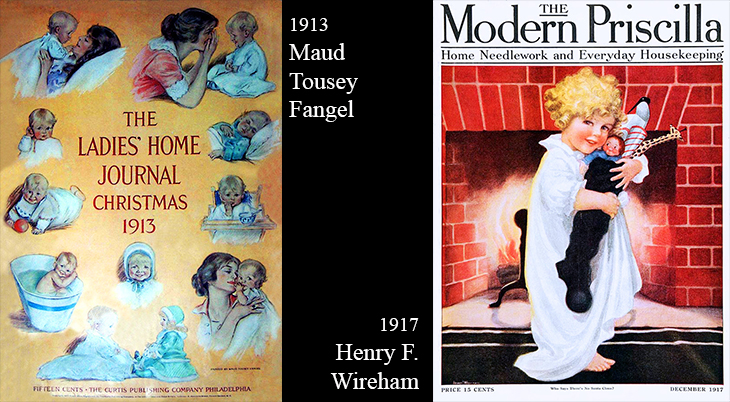 Little is know of American artist and magazine cover illustrator Henry F. Wireman (b. 1877- d. 1931), other than he lived in Pennsylvania with his artist wife Katharine Richardson Wireman. His illustrations often featured children and grace prints as well as the covers of many vintage periodicals such as The Modern Priscilla, American Woman, The Literary Digest, etc.

Both Harold Brett and J.C. Leyendecker created cover designs and illustrations for magazines such as Harper’s Weekly, The Saturday Evening Post, The Country Gentleman, The Saturday Evening Post, The Ladies’ Home Journal, and Collier’s. Their Christmas magazine covers below capture the homecoming theme in 1914 (before American entered WWI) and in 1918, just after World War One ended. 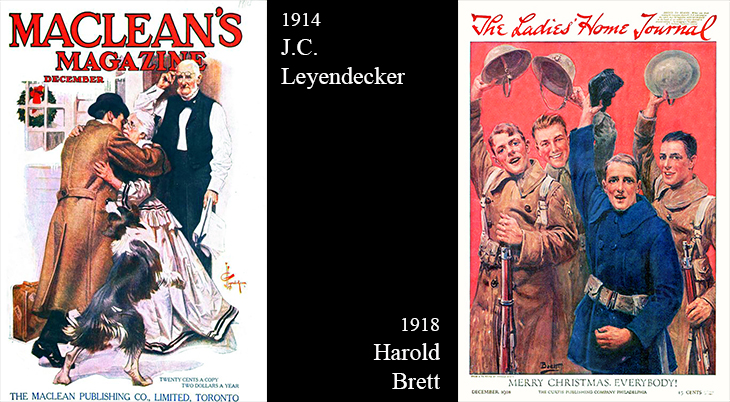 Artist J.C. Leyendecker is particularly known for creating over 300 cover paintings for The Saturday Evening Post.

American artist Charles Mark Relyea (b. 1863 – died. 1932) studied at the Pennsylvania Academy of Fine Arts, at the New York City Art Students League, and in Paris, France. He lived with his wife Eloise in New Rochelle, New York, and illustrated books for writers (James Whitcomb Riley) and magazines such as Munsey’s, St. Nicholas, Maclean’s, and other periodicals. When Charles Relyea and his wife divorced in 1920, she stayed in New Rochelle and he moved into his Bronx art studio. 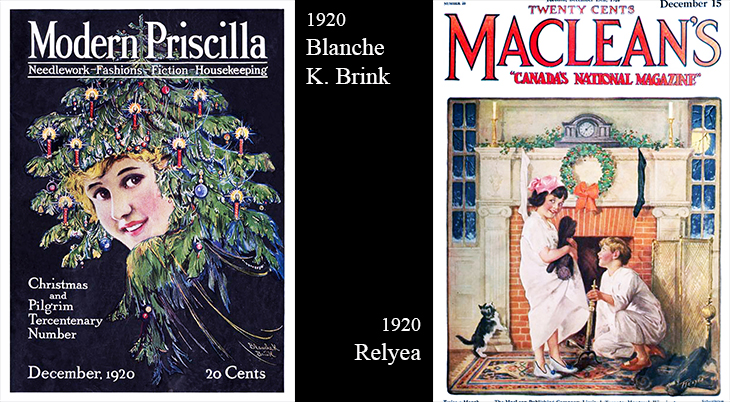 Samuel Nelson Abbott (b. 1874 – d. 1953), was a painter and advertisement illustrator for menswear company Hart Schaffner and Marx. He also painted covers for many popular periodicals of the day such as The Saturday Evening Post, Woman’s Home Companion etc. His stunning December 1921 cover “A Cowboy Santa Claus” for The Ladies Home Journal glows with rich colors. 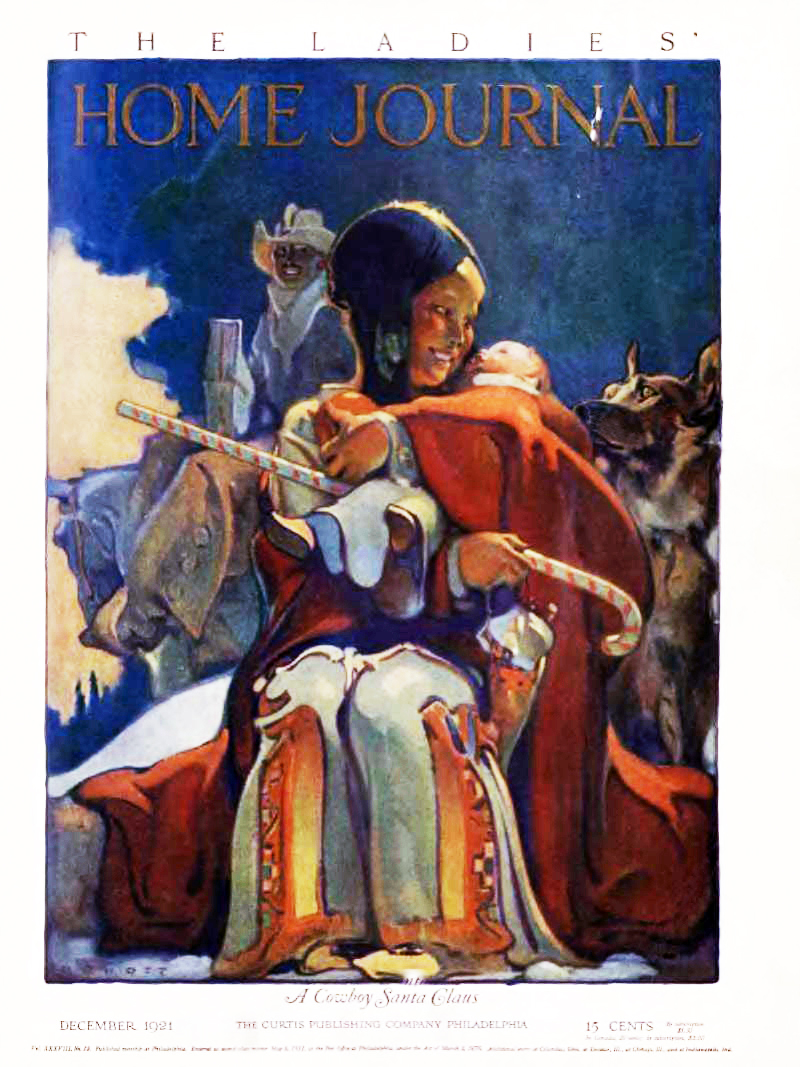 Julian Mansfield‘s illustrations can be seen on the covers of vintage periodicals including Fruit, Garden and Home; Better Homes & Gardens; and Maclean’s magazine. 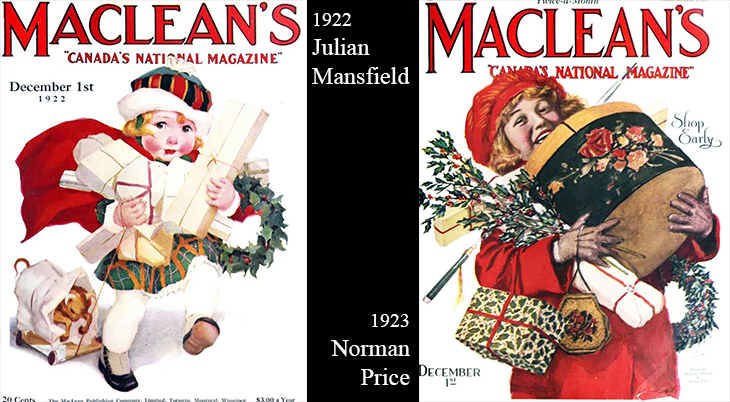 Both H. Willard Ortlip and N.C. Wyeth portray their vision of Santa Claus for the covers of Maclean’s and The Country Gentleman magazines in 1924 and 1925, respectively. 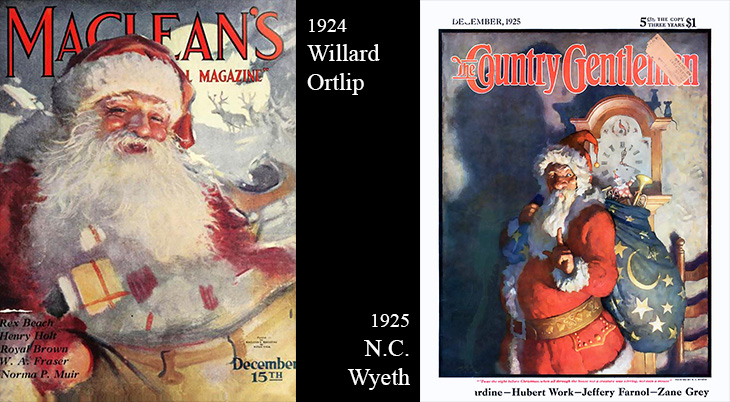 H. Willard Ortlip (b. 1886 – d. 1964) is best known for his many religious paintings (he was also a teacher, and a Methodist preacher). His New York Times obituary noted that Houghton College’s Chapel-Auditorium was home to Ortlip’s 160-foot religious mural “Redemption“. He wasn’t limited to religious works, and his paintings and illustrations can be seen on magazines such as Maclean’s, The Literary Digest, and Collier’s Weekly.

Artist Newel Convers Wyeth (b. 1882 – d. 1945; father of famed painter Andrew Wyeth) illustrated editions of classic literature and popular novels (Treasure Island, Robin Hood, The Yearling, etc.). N.C. Wyeth illustrated six covers for The Saturday Evening Post, and many other vintage periodicals such as The Country Gentleman, display his work on their covers.

Wishing everyone a very healthy, safe, and Merry Christmas 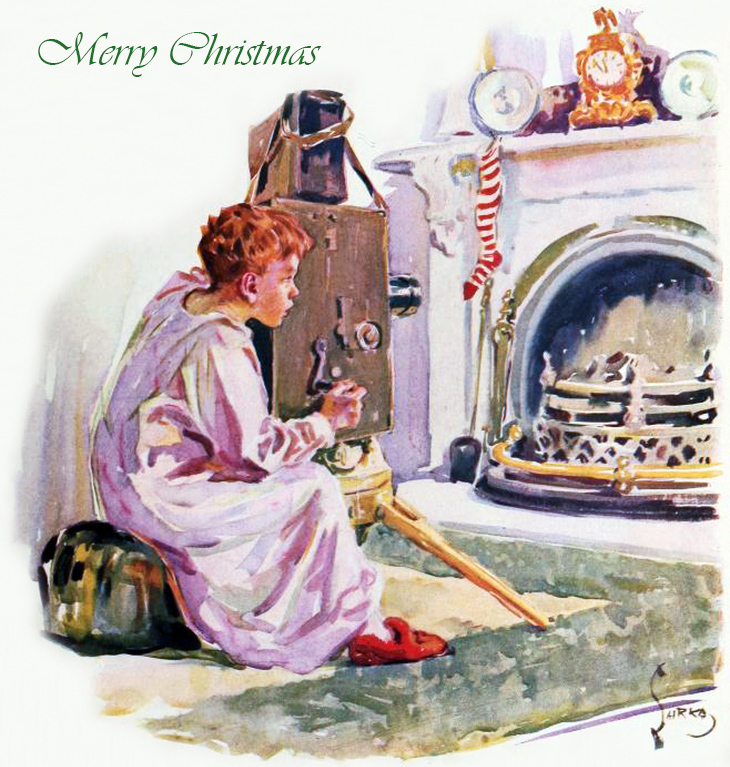 *Source images are believed to be in the public domain or Creative Commons licensed & sourced via Wikimedia Commons, unless otherwise noted. Modified images are shown here in smaller, low-resolution format*