These holiday commercials are like mini-movies, full of feel-good moments for all generations. They’ll tug at your emotions and fill your heart with peace and joy. 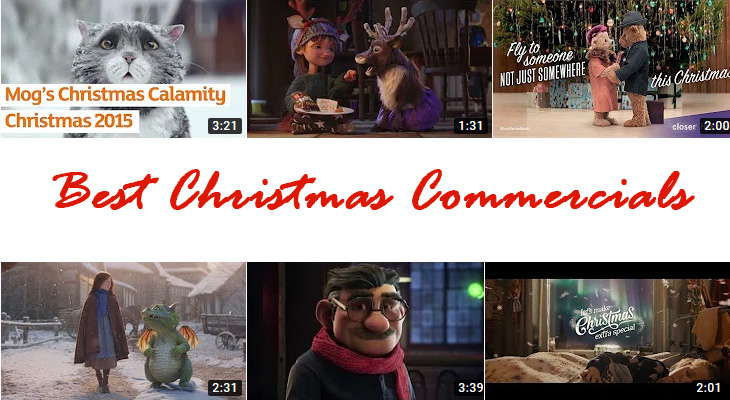 What makes these Christmas commercials special are great music, some (or a lot) of animation, and a blend of nostalgia, sentiment, and history.

The folks at Heathrow Airport have produced some of the best Christmas advertisements I’ve seen over the past several years. For this reason I rate their Christmas commercials as #1.

Their 2016 “Coming Home for Christmas” ad featuring an elderly bear couple will make you smile.

And 2018’s “Making it Home Makes It Christmas” with the senior bears far from home in the Florida Keys before Christmas, may bring a tear to your eye.

Tied for second place are McDonald’s UK and Microsoft, with their animated Christmas commercials featuring reindeer.

McDonald’s UK has had a couple of great Christmas commercials, featuring the cutest animated reindeer we’ve seen yet.

This is their 2019 “ReindeerReady” advertisement.

Microsoft is a good competitor in this commercial space, with their sweet Holiday Magic: Lucy & the Reindeer commercial.

British grocery store chain Sainsbury’s has come up with some great commercials that emphasize the true spirit of Christmas, often with historical touches and/or animation.

Their 2013 1914 Christmas advertisement hearkens to the historic Silent Night observed during WWI in the trenches. There’s no animation but with it’s unique nod to history and peace on earth and goodwill to all, it’s deserving of inclusion.

A Silent Night (Christmas 1915) by Celtic Thunder, is included in our Top Christmas Songs in Classic Clips article.

2015 gave us Sainsbury’s animated and funny cat in the commercial “Mog’s Christmas Calamity“.

In 2019 their “Nicholas the Sweep” commercial set in 1869 will make you remember when getting an orange or lump of coal in your Christmas stocking was a reality.

The Best of the Rest Christmas Commercials

Coca-Cola’s 2020 Christmas Commercial follows a dad away from his family before Christmas, encountering magnificent nature at it’s best as he struggles to deliver his daughter’s letter to Santa.

Asda’s 2019 Christmas TV Advert begins with Tilly‘s grandfather and his cane, and follows her as she and Jack make holiday magic.

Spain’s 2015 Christmas lottery ad “Justino” features an elderly nightwatchman in a mannequin factory celebrating the holidays in an unusual style.

Chick-fil-A® presents “The Time Shop“, rightly billed as a holiday short film vs an advertisement per se.

Microsoft’s “Find Your Joy” 2020 Holiday Commercial has a dog checking in with his family and finding them all happily engaged, then having his own adventure. If you have dogs, turn the sound down a wee bit unless you want to hear them bark in response.

Xfinity’s 2020 Holiday Commercial features Steve Carell as a Santa who’s looking for some gift ideas and coming up with some unusual ideas. This is 2020, so there’s a video conferencing call clip, of course!