Q2. Who did David Letterman credited for having the most influence on his career? 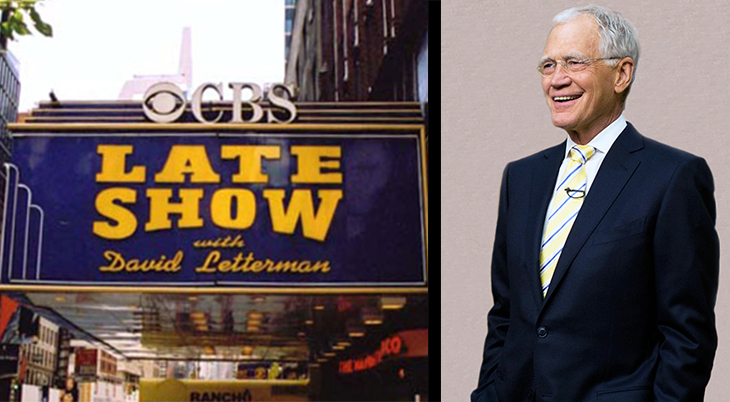 David Letterman was born on April 12, 1947 in Indianapolis, Indiana, where he began his show biz career as a radio talk show host. He moved to television to star in a kiddie show, a Saturday morning talk show host, and local television anchor and weatherman. His weather reports showed his comedy slant:

“From space you can see the border between Indiana and Ohio has been erased. I’m not in favour of this“.

He moved to Los Angeles in 1975, began performing at L.A.’s famous The Comedy Store, and wrote jokes for comedian Jimmie Walker’s stand-up act. In 1980 he had his own short-run morning comedy show on NBC, The David Letterman Show. Two years later he was back on NBC with Late Night with David Letterman.

When Letterman failed to be given the retiring Johnny Carson’s timeslot by NBC in 1992, David departed for CBS.

David Letterman’s timeslot on NBC was taken over by a young comedian/host, Conan O’Brien.

The Late Show with David Letterman premiered August 30, 1993 on CBS.

To woo Letterman away from NBC, CBS doubled his Late Night salary and signed him to a $14 million/year contract for 3 years, and renovated the historic Ed Sullivan Theater in New York City (to the tune of another $8 million).

Letterman had said many times that he wanted to spend more time with his second wife Regina Lasko, and their 11 year old son Harry.

In an interview with Alexandra Klausner (Associated Press / dailymail.co.uk), he implied that he was feeling increasingly out of touch with today’s younger generations – the demographic that at one time, fueled the Late Show fires when the baby boomer generations were younger and could still stay awake after 11pm:

“There’s no cure to being 68…the number of people who are wildly popular on television or music or the Internet that I don’t have any knowledge of is endless. I’m constantly going, ‘Who is so-and-so? Who LIKES so-and-so?’ It’s like I’m the drifter who’s wandered into town and doesn’t know anybody…” – David Letterman, 14 May 2015

Officially a senior citizen at age 68 when he retired, Letterman already had other irons in the fire.

He’d founded Worldwide Pants, a film and television production company, back in 1991. Worldwide Pants is known primarily for comedies and talk shows such as Everybody Loves Raymond, The Late Late Show, etc., and Letterman served as Executive Producer on many of their projects.

His Netflix interview series My Next Guest Needs No Introduction with David Letterman premiered in 2018, and has included guests such as Barack Obama, George Clooney, Tina Fey, Malala Yousafzai, Melinda Gates, and Ellen DeGeneres.

Both Bill Murray and David Letterman may have looked a lot younger then, but their humour carries on.

A2. Letterman was first invited to appear on The Tonight Show with Johnny Carson in 1977, and in 1978 became a regular guest host for Carson. When Johnny Carson decided to retire, he made it clear he wanted Letterman to take over his time slot/show at NBC. Carson also appeared as a guest on the Late Show with David Letterman. Letterman has said Carson was the person that had the most influence on his career.

*Images & videos are believed to be either in the public domain, constitute fair use, used by permission, or Creative Commons licensed & sourced via Wikimedia Commons, Vimeo, YouTube, or Flickr, unless otherwise noted*