Perennial funnyman and sports enthusiast Bill Murray is enjoying his extra innings of life, stardom, golf & baseball these days as he travels across America. His life journey started back in 1950…

Baby boomer and new senior citizen Bill Murray was born September 21, 1950 in Evanston, Illinois and grew up in the Chicago area. Bill was the middle of 9 children in his Irish Catholic family; his sister Nancy is a nun and three of his brothers (Brian, Joel & John) are also actors. 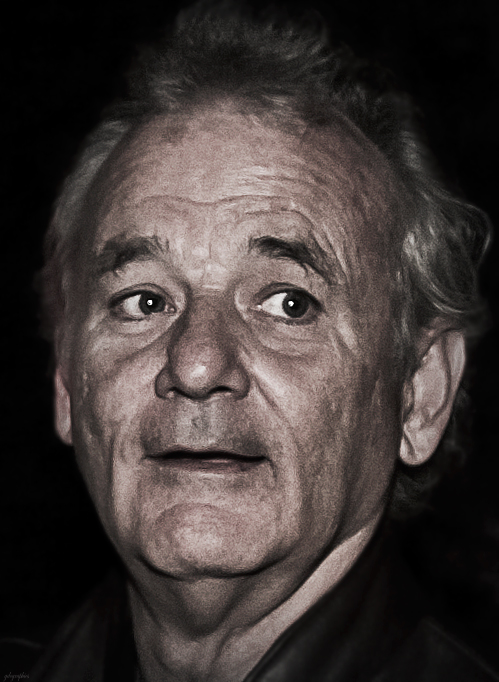 As a teenager Bill was ambitious, working as a golf caddy to help pay for his education at Loyola Academy (a private Roman Catholic Jesuit high school) and was the lead singer of the Dutch Masters, a rock band.

Bill Murray attended Regis University, a private Roman Catholic Jesuit school in Denver, Colorado with the vision of being a surgeon.

At the beginning of his second year of Regis University in September of 1970, Murray was arrested at O’Hare airport in Chicago on his 20th birthday for drug possession (marijuana).

Released on probation as a first-time offender, he dropped out of university before getting kicked out. 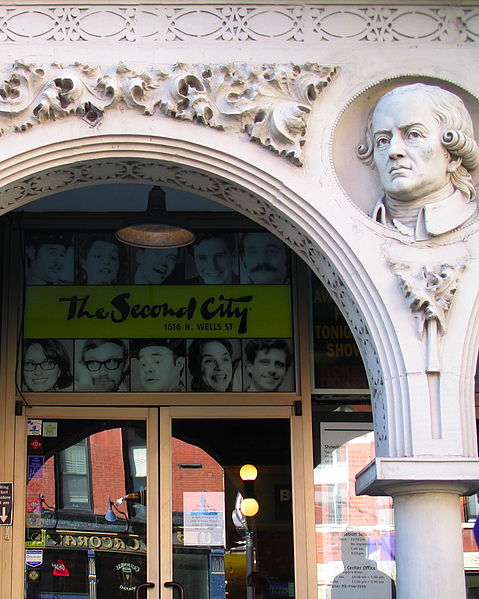 The Second City Chicago Old Town building had Bill Murray’s picture in the top right of the banner over the entrance door.

Murray worked odd jobs before deciding in 1972 to try stand-up comedy, something his older brother Brian was beginning to have some success with.

He soon joined Brian in the cast of Chicago’s now-famous The Second City improv group, where he met fellow comedian John Belushi.

Below, Bill Murray is featured in a Second City comedy skit “The Waiting Room“; he’s joined by George Wendt (Norm on Cheers), among others. 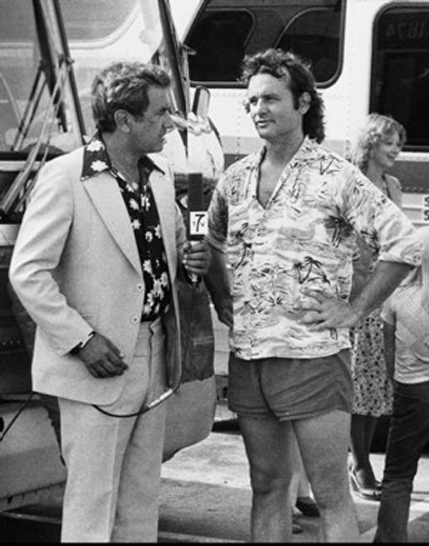 Bill Murray’s movie career started before his time on SNL – back in 1976 with an uncredited role in Next Stop, Greenwich Village.

After a few parts in unsuccessful movies, he landed a starring role in the comedy film Meatballs (1979), directed by Ivan Reitman and written by (among others), his old National Lampoon Radio Hour buddy Harold Ramis.

Below, a clip from Meatballs featuring Bill Murray “coaching” some soccer-playing campers.

The following year Bill Murray, along with Lorne Michaels and most of the original SNL cast left Saturday Night Live.

After the flop Where the Buffalo Roam (1980), Murray appeared in Caddyshack (1980) as greenskeeper Carl Spackler, intent on decimating a rogue gopher invasion at a golf course. Caddyshack was based on his brother Brian Doyle-Murray’s experiences as a golf caddy, and was written by Brian, Douglas Kenney and Harold Ramis (who also directed).

Bill Murray co-starred in Caddyshack alongside fellow comedians Chevy Chase and Rodney Dangerfield. Bill & Brian’s younger brothers Brian Murray had the supporting role of Lou Loomis, and John Murray had a bit part (uncredited) as a caddy. Caddyshack was a financial success and has a cult following even today.

Next up for Bill Murray was the role of failure John Winger, who joins the US Army in the hit comedy Stripes (1981), co-starring and co-written by Harold Ramis. He plays an amorous cook in the Stripes clip below, wackily romancing co-star P.J. Soles.

Bill Murray married Margaret Kelly in Las Vegas in January 1981 and their son Homer Murray was born in 1982. The couple primarily lived in the Hudson River Valley area of New York State during their marriage.

Murray followed his success in Stripes with the part of Jeff Slater in Tootsie, about a writer that rooms with an unsuccessful actor named Michael Dorsey that transforms himself into actress Dorothy Michaels, played by the movie’s star Dustin Hoffman. Tootsie (1982) was a hit with audiences and Murray’s acting career was on a roll.

Bill Murray co-starred in three movies in 1984, one of which he also wrote – The Razor’s Edge (1984) – based on the novel by W. Somerset Maugham. To finance the filming of his The Razor’s Edge movie, Murray agreed to appear in Ghostbusters (1984). The Razor’s Edge was a rare non-comedic role for him, and an equally rare box-office flop.

In sharp contrast to The Razor’s Edge, Ghostbusters (1984) was a monster financial and critical success, spawning film sequels, television series, and video games.

In the movie clip from Ghostbusters below, Bill Murray demonstrates his sadistic (and funny) ESP test.

Bill Murray took a break from acting for a while after Ghostbusters was released. He moved to France with his family, studied history and philosophy at the Sorbonne, and spent time with his young family in the Hudson River Valley. Margaret and Bill’s Murray’s youngest son Luke was born in Paris in 1985.

Below, a frustrated Bill Murray (as weatherman Phil Connors) experiences déjà vu (for the first time) in a scene from Groundhog Day. Angela Paton is inn manager Mrs. Lancaster.

Bill Murray and Jennifer Butler got married in 1997, and promptly had sons  – Cooper (1997) and Lincoln (2001). Jennifer and Bill Murray resided in the Hudson River Valley area and Murray occasionally coached the boys Little League baseball teams.

Below, Bill Murray in a scene from Charlie’s Angels, trying to escape. Crispin Glover stands guard outside while the Angels (Cameron Diaz, Lucy Liu, and Drew Barrymore) and a bird, try to rescue him.

Bill Murray appeared in another 17 movies during his fifties, including Lost in Translation (2003), a critically acclaimed movie and role for which he was nominated for an Academy Award for Best Actor. 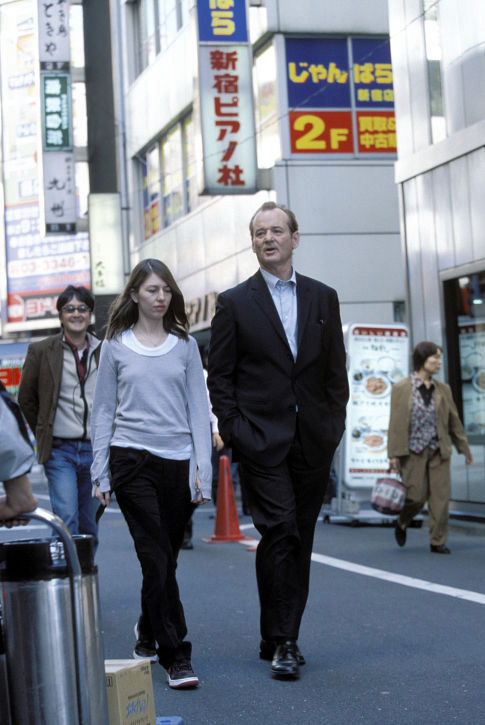 (Sofia Coppola and Bill Murray on the set of Lost in Translation, c. 2003 Photo: L )

Murray and his Lost in Translation romantic leading lady Scarlett Johansson each won a BAFTA Award for their performances in the movie.

Lost in Translation screenwriter and director Sofia Coppola received an Academy Award for Best Original Screenplay, and a nomination for Best Director and Best Picture. She said that she had always wanted to work with Bill Murray and wrote the movie with him in mind.

After many months of trying to track down the elusive star she enlisted his friends and finally got Bill Murray to agree to star in the film, which was filmed on location in Tokyo.

Below, Bill Murray in a scene near the beginning of Lost in Translation, playing an actor filming a commercial. What the director is saying to him seems to be getting lost in translation…

When Jennifer Butler filed for divorce from Bill Murray in May 2008, her divorce petition indicated the couple had been separated for a couple of years. She initially alleged (and then withdrew) that Murray’s infidelity, addictions to sex, marijuana and alcohol, and domestic violence were at fault. A settlement was quickly reached and their divorce finalized in June 2008.

Extra Innings in The 60+ Years

In his sixty-plus years, Bill Murray has made numerous television guest-starring appearances, and been featured in 11 movies (starring & supporting roles, and cameos).

He was nominated for a Golden Globe for Best Actor for his starring role as the senior Franklin D. Roosevelt in Hyde Park on Hudson (2012), and another Golden Globe Best Actor nomination for his role as Vincent MacKenna in St. Vincent (2014).

Also in 2014, he appeared as Jack Kennison in the television miniseries Olive Kitteridge (2014), and was nominated for an Emmy Award for Outstanding Supporting Actor in a Limited Series or a Movie.

Murray joined other SNL alumni on the 40th Anniversary Special for Saturday Night Live TV show in 2015 , and voiced Baloo in the live-action film The Jungle Book (2016). 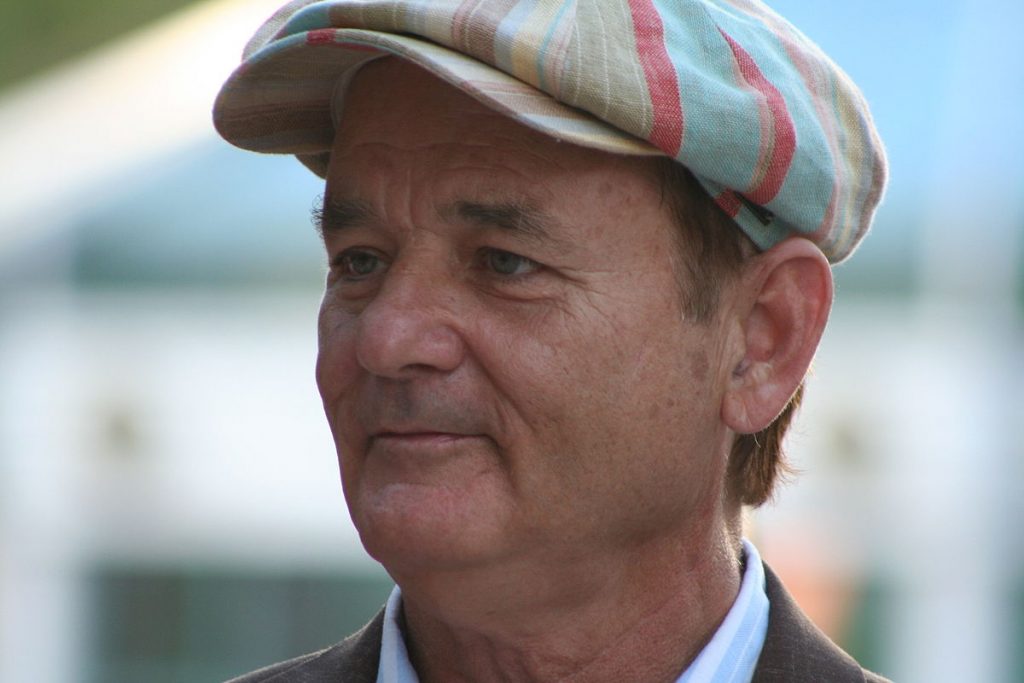 His philanthropy has helped fund a home that provides affordable housing for low-income seniors in the Chicago, Illinois area.

A lover of baseball, golf and other sports, Murray is part-owner of the St. Paul Saints independent semi-pro baseball team and other semi-pro and minor league sports teams in different cities.

Most recently Bill Murray has been seen on television screens in the reality-TV comedy series Extra Innings, which debuted in 2017. Extra Innings features baseball fans Murray with his brother Brian Doyle-Murray, as they visit with minor league baseball teams while traveling across America.

Note: This article was first published in 2015 under the title Celebrating Seniors – Bill Murray Turns 65. It has been updated with new & additional content.