A countdown of my picks for the Top 15 hauntingly funny movies. From vintage classics such as The Ghost Goes West (1935) and Blithe Spirit (1945) to modern classics like Ghost (1990) and The Frighteners (1996) – these films have just the right amount of suspense and humor to put you in the spooky Hallowe’en spirit (get it?), without scaring the bejeebers out of you. 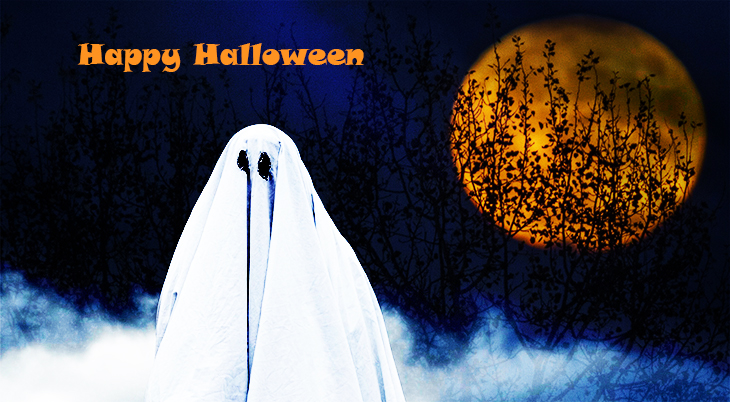 Several feature films and made-for-TV movies have been based on witty Oscar Wilde’s first published short story. Wilde’s funny tale of The Canterville Ghost (1887) has a family moving to a castle haunted by the ghost of a nobleman who killed his wife, and was then walled in and starved to death. This 1944 film version of The Canterville Ghost stars Charles Laughton as cowardly nobleman/ghost Sir Simon de Canterville from the 1600s. Reginald Owen plays Simon‘s father, who curses his son to “find no rest” until his act of cowardice has been atoned for.

Margaret O’Brien co-stars 6-year-old Lady Jessica de Canterville, the current owner of the castle which is now – during 1940s WWII – being occupied by US Army Rangers. One of the rangers – Cuffy Williams (Robert Young) – is discovered to be a descendant of Simon‘s brother. An incident which appears to show Cuffy as also being a coward, sees him disgraced and left behind at the castle by his troop. Directed by Norman Z. McLeod, Jules Dassin (with help from experience director-actor Charles Laughton). The cast includes William Gargan, Frank Faylen, and Peter Lawford as Anthony de Canterville. 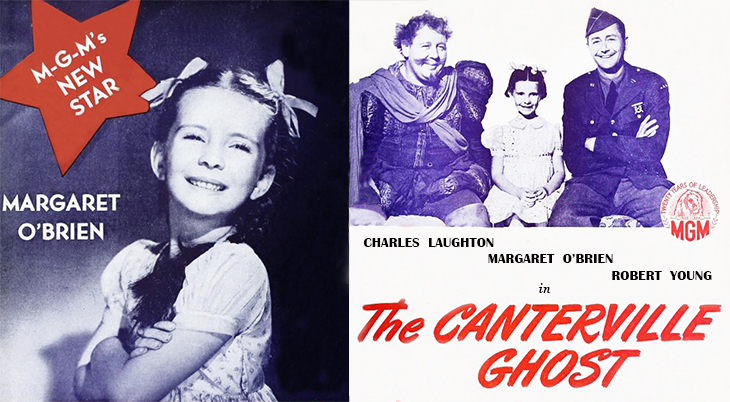 A new version of The Canterville Ghost starring Hugh Laurie, Freddie Highmore, Stephen Fry, and Imelda Staunton, is in post-production. Due to COVID-19 restrictions, it’s completion date is TBD. 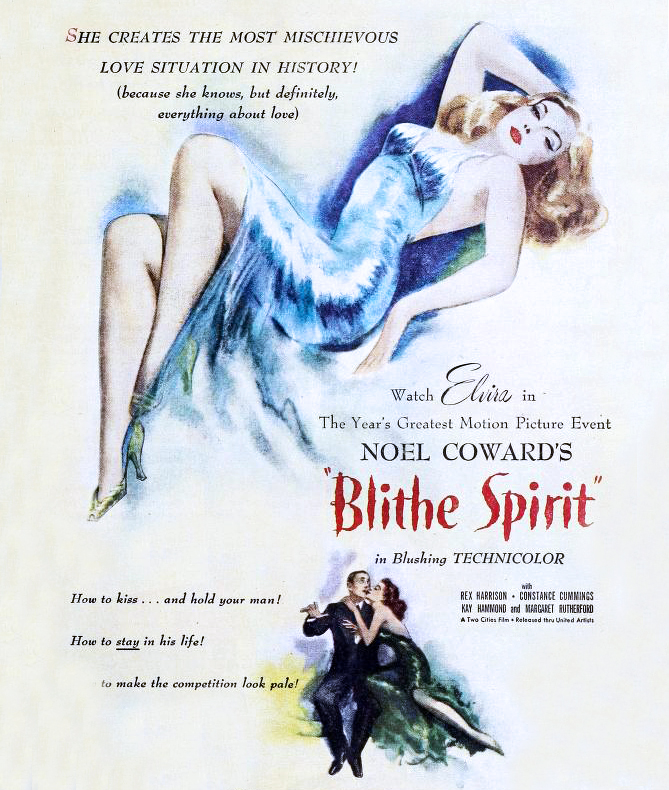 David Lean adapted and directed the 1945 film version, with Margaret Rutherford as the medium Madame Arcati and Kay Hammond as Elvira Condomine, the deceased first wife of novelist Charles Condomine (Rex Harrison). Charles and his wife second and current wife Ruth (Constance Cummings), have invited friends to their country home for a seance; witty dialogue ensues. Margaret Rutherford and Kay Hammond had created their roles in the original stage play. Blithe Spirit’s special effects technician Tom Howard won the Academy Award for his work on the movie.

Based on author Mary Norton’s 1943 children’s book The Magic Bed-Knob. In a similar vein to Blackbeard’s Ghost, this is another Disney film that uses witchcraft, but adds in some animation to the live action. Set during the WWII Blitz of England, three children are evacuated from London to the countryside and put under the care of Miss Price (Angela Lansbury). When the Nazis are threat her museum, Miss Price uses a spell to bring the museums displays of suits of armor from knights, and military uniforms, to life. David Tomlinson is Professor Browne and Roddy McDowall is the local minister. With Alan Hewitt, and former silent film star Reginald Owen as Major General Sir Brian Teagler, in his last film role. Bedknobs and Broomsticks was nominated for 5 Academy Awards, winning one – Best Special Visual Effects.

Billed as a horror-comedy film, this movie stars Bob Hope as Wally Campbell and Paulette Goddard as Joyce Norman, two of several survivors of deceased millionaire Cyrus Norman. Norman‘s will is about to be read at his remote bayou estate by his executor Mr. Crosby (George Zucco), but Crosby discovers the will has been tampered with. In addition to Joyce and Wally, other hopeful inheritors that arrive at the estate include characters played by John Beal, Douglass Montgomery, Nydia Westman, and Elizabeth Patterson as Aunt Susan. A clause in the will stipulates that any heirs must remain sane (and alive) for 30 days after inheriting. Joyce is first on the list to inherit, and of course, everyone has to stay overnight in the mansion with her. Co-incidentally, there’s a nearby insane asylum and wouldn’t you know it, a murderer known as “The Cat” has escaped…. 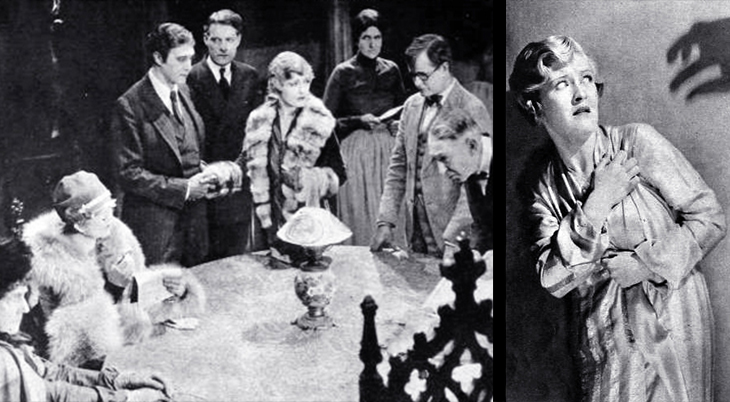 A few years after The Cat and the Canary, stars Paulette Goddard and Bob Hope were re-teamed in a another ghostly comedy film, The Ghost Breakers. This time around, Bob Hope is crime reporter Lawrence Lawrence aka Larry, and Goddard is hotel guest Mary Carter. Mary is given the deed to a remote plantation and mansion on an island near Cuba, by creepy Cuban lawyer Mr. Parada (Paul Lukas). Naturally she has to go to the island…With Richard Carlson, Willie Best, Anthony Quinn, Pedro de Cordoba, Paul Fix, and other familiar faces.

This film version of The Ghost Breakers was a remake of two earlier silent films with the same name – a 1914 movie starring H.B. Warner and Rita Stanwood, and the 1922 film with Wallace Reid, and Lila Lee.

The comedy duo of Bud Abbott and Lou Costello rarely misses a beat, and for some reason their movies that combine an element of horror with comedy, are among their best. 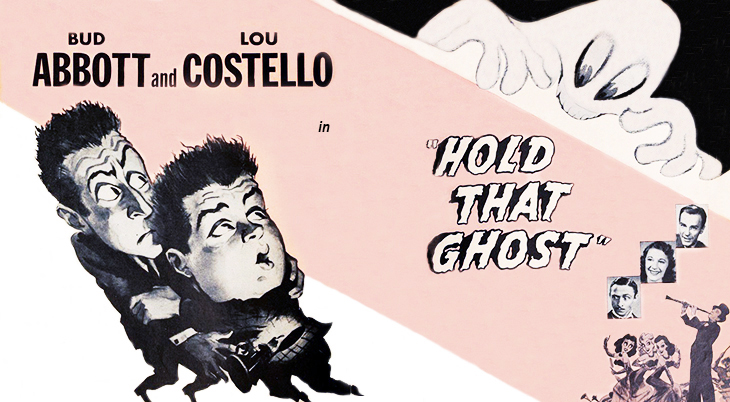 Hold That Ghost is no exception, with Abbott and Costello playing Chuck Murray and Ferdie Jones, gas station attendants and waiters at a nightclub. They get fired from the night club where the Andrews Sisters are singing, and back at the gas station, they are taken along for the ride when a mobster is pursued by police. When the bad guy is killed in a shootout, they inherit his estate. They’re now the target of other mobsters, and back at the new rural estate they’ve inherited, strange things keep happening….

The Time of Their Lives (aka The Ghost Steps Out) starring Bud Abbott and Lou Costello is one of the best from that film comedy partnership. 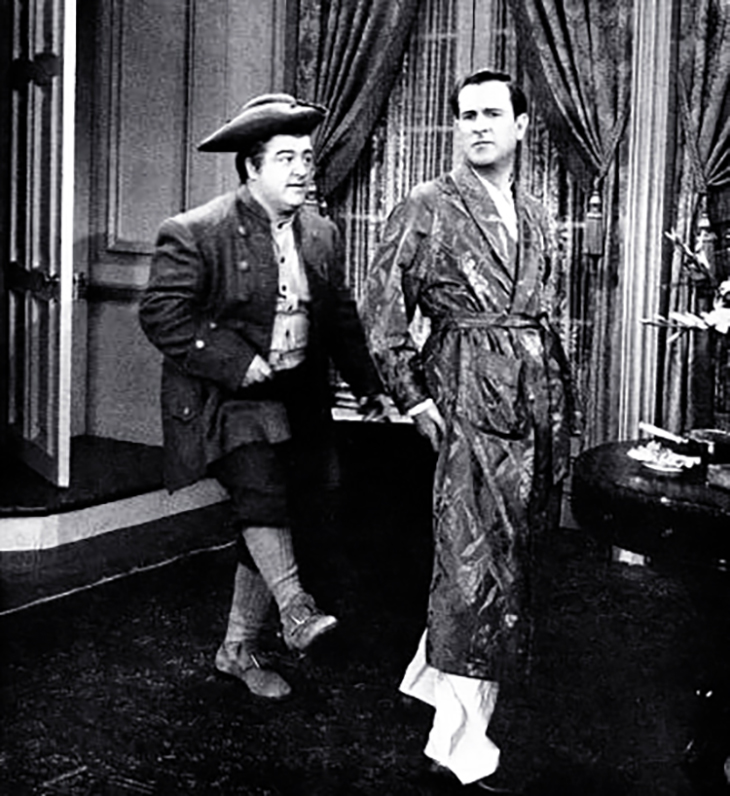 Lou Costello is Horatio Prim in 1780, who has a crush on Tom Danbury‘s (Jess Barker) maid Nora (Ann Gillis), but is foiled by the devious butler Cuthbert Greenway (But Abbott). General George Washington, Benedict Arnold, and other historical characters are mixed into the plot, which has Marjorie Reynolds as Danbury‘s fiancee Melody. Melody and Horatio are mistaken for traitors and shot, and their ghosts are bound to the estate until they can prove their innocence. Fast forward 160+ years, and some new folks have moved into the now rebuilt estate.

In addition Abbott and Costello, other great character actors and actresses such as Marjorie Reynolds, Binnie Barnes, John Shelton, Donald MacBride, Rex Lease, and Myron Healy have roles to play in The Time of Their Lives.

Although Beetlejuice is not one of my personal favorite films, almost everyone I know would put it on a best of funny scary movies list, so I will too. And, it does have some startlingly hilarious scenes, with good music too. Director Tim Burton is at the top of his game here.

Alec Baldwin and Geena Davis are the ghostly Maitlands, trapped in their earthly home after an accident. When the new family moves in – played by Jeffrey Jones, Catherine O’Hara, and Winona Ryder – they can’t be scared away because they can’t see the ghosts. Enter Betelgeuse (Michael Keaton)!

Warner Bros. shares their top scenes from Beetlejuice in this clip.

Beetlejuice was a financial and special effects success, winning the Academy Award for Best Makeup. 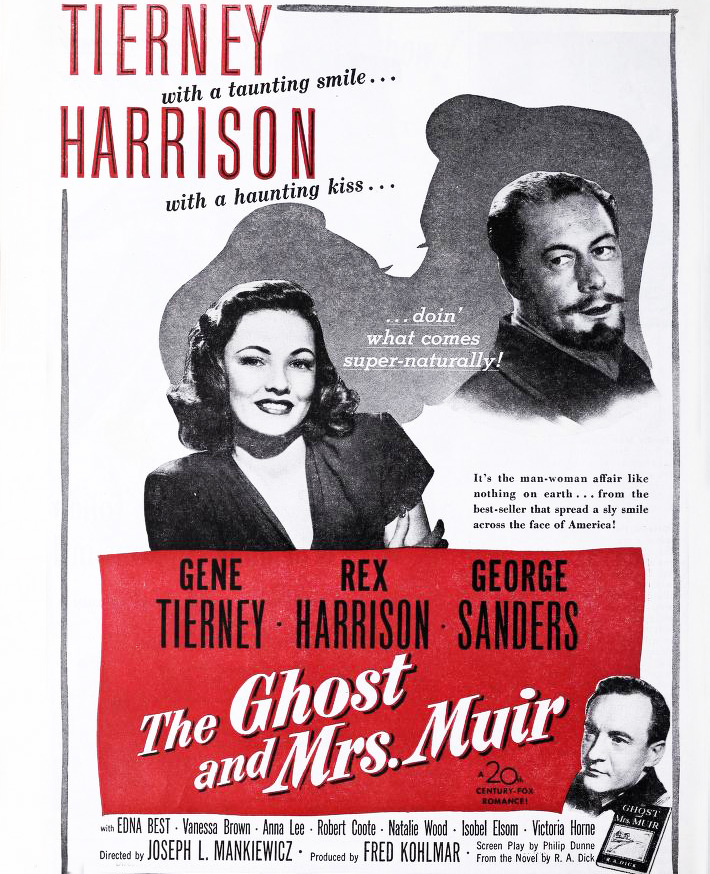 The stellar cast – beginning with Rex Harrison as the Captain and Gene Tierney as the lonely widow who moves into Gull Cottage – are just one of the reasons to watch The Ghost and Mrs. Muir. Directed by Joseph L. Mankiewicz, with a supporting cast that includes George Sanders, Vanessa Brown, Anna Lee, Robert Coote, Natalie Wood, and Edna Best.

It could turn up on many “best of” lists, and I’ve written more extensively about The Ghost and Mrs. Muir (and the filming of it), on this page.

You can’t go wrong with a Michael J. Fox movie if you’re looking for funny – and in this case, one of the scariest (on my list, lol) Halloween films. Fox plays Frank Bannister, a different kind of ghostbuster, who crosses path with some truly bad ghosts (and some very funny ones). Trini Alvarado is his love interest Lucy Lynskey, while Peter Dobson is her brother Ray, who’s being haunted by ….but I won’t ruin it for you. With John Astin, Jeffrey Combs, Dee Wallace, Jake Busey, and Chi McBride.

A film so popular – and good – it inspired several sequels and remakes, including 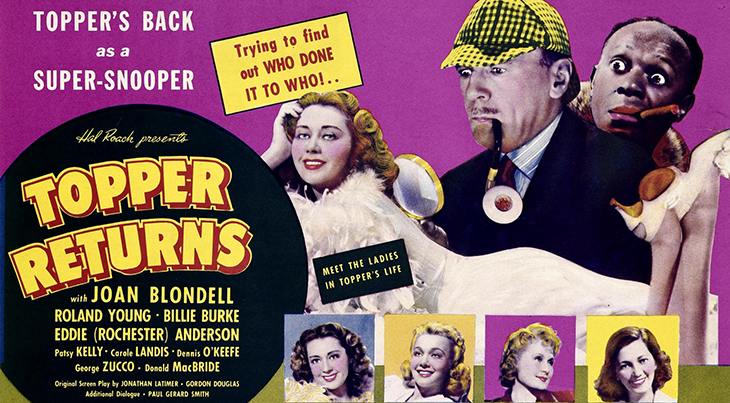 In this clip from Ghost, Demi Moore watches as Whoopie Goldberg and Patrick Swayze bicker.

In this clip from Ghostbusters, Dan Aykroyd, Ivan Reitman, and Bill Murray confront a ghost in the hallway

This is yet another film so popular that numerous film and television sequels and remakes were spawned:

You’ll have to search far and wide to find an actor that can top Don Knotts at the top of his physical comedy game, as he is here in The Ghost and Mr. Chicken. Knotts plays cowardly wanna-be reporter Luther Heggs, out to prove he can tough it out in the local haunted house overnight, and solve a murder. The stellar supporting cast of The Ghost and Mr. Chicken includes a spooky Liam Redmond, Dick Sargent, Skip Homeier, Reta Shaw, Joan Staley, Lurene Tuttle, and Charles Lane. Directed by Alan Rafkin, and written by James Fritzell and Everett Greenbaum.

Wishing you and yours a very safe, fun, and just a little spooky,

If you like my Best Classic Scary & Funny Ghost Films for Halloween, you may also like my other “best movie” lists of seasonal or themed favorites: