Thirteen of the best old & new Christmas songs, performed by favorite singers in these classic film clips and live performances. 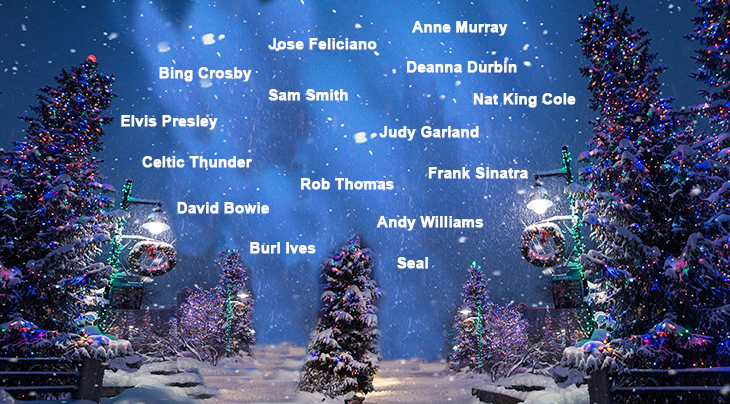 If you are a senior or baby boomer, you couldn’t have missed seeing Bing Crosby in a classic Christmas movie at the theatre or on television. Two of his movies featured his arresting version of White Christmas: Holiday Inn (1942), and White Christmas (1954).

May your days be merry and bright

and may all your Christmases be white

New York City at Christmas time has been a popular theme in movies, from senior citizen and baby boomer favourites like Miracle on 34th Street (1947), to more modern favourites like Trading Places (1983), Home Alone 2: Lost in New York (1992), and The Night Before (2015).

As Rob Thomas sings in A New York Christmas,

Call on your Angels, come down to the city

Crowd around the big tree, all you strangers who know me

Bring your compassion, your understanding

It’s the Most Wonderful Time of the Year – Andy Williams

As Andy Williams sings in It’s the Most Wonderful Time of the Year,

It’s the most wonderful time of the year

There’ll be much mistletoeing, and hearts will be glowing

When loved ones are near

As millions of 50+ baby boomers & seniors will remember, Burl Ives sang Have A Holly Jolly Christmas (composed by Johnny Marks in 1962) in the animated TV Christmas-special film Rudolph the Red-Nosed-Reindeer(1964). Both the film and the song became seasonal favorites.

Burl Ives sings Have A Holly Jolly Christmas in a clip from Rudolph the Red-Nosed-Reindeer, below.

Have a holly, jolly Christmas; and when you walk down the street,

Say Hello to friends you know and everyone you meet

What do you get when you meld two beautiful Christmas songs and two unlikely performers in a duet? An instant Chrismas classic.

In the delightful romantic murder mystery caper film Lady on a Train (1945), leading lady Deanna Durbin is away from her father at Christmas time. At his request during a phone call, she sings this beautiful version of Silent Night to him.

As Deanna Durbin sings in Lady on a Train

All is calm, all is bright

Have Yourself A Merry Little Christmas – Judy Garland, or Sam Smith?

Courtesy of the incandescent Judy Garland and the classic movie Meet Me in St. Louis (1944) – the song Have Yourself a Merry Little Christmas (written by Hugh Martin and Ralph Blane) was first introduced to Christmas music fans over 70 years ago.

This scene from Meet Me in St. Louis (1944), Judy Garland sings Have Yourself a Merry Little Christmas to Margaret O’Brien.

How does Judy Garland’s version of Have Yourself a Merry Little Christmas compare to Sam Smith‘s version in 2014 (below)?

As both Judy Garland and Sam Smith sing in Have Yourself a Merry Little Christmas,

Have yourself a merry little Christmas, Let your heart be light

From now on, our troubles will be out of sight

Songwriters John Frederick Coots & Haven Gillespie wrote Santa Claus is Comin’ to Town during the Great Depression in 1934, and it was first heard when Eddie Cantor sang it live on his radio show. Cantor added extra verses, asking his listeners to help others at Christmas.

As Frank Sinatra and Seal sing in Santa Claus is Coming to Town,

Santa Claus is coming to town

First written by Felix Bernard and Richard B. Smith in 1934, Winter Wonderland quickly became a favorite holiday tune and has since been performed by hundreds of artists. Dean Martin, Connie Francis, Perry Como, Johnny Mercer, Doris Day, Johnny Mathis, and many others have included Winter Wonderland on their Christmas albums.

As we dream by the fire

The plans that we’ve made

Walking in a winter wonderland

Seniors may remember when Bing Crosby’s recording of the sentimental I’ll Be Home for Christmas (1943) was first released.

While World War II raged on, songwriter Kim Gannon (with credit also to Buck Ram) said he was thinking of all people not able to make it home for Christmas, not just soldiers, when he wrote I’ll Be Home For Christmas. Although it was among the most requested song at USO shows during the rest of WWII, the BBC banned the song from broadcast in the U.K. for fear it would lower the morale of troops.

To the dismay of Elvis Presley fans, some fourteen years later it was announced just before Christmas 1957, that Elvis would soon begin serving in the U.S. Army (Presley served from 1958-1960 as a regular soldier). Elvis Presley included I’ll be Home for Christmas on his Elvis’ Christmas Album (1957).

As Elvis Presley and countless others have sung in I’ll be Home for Christmas,

I’ll be home for Christmas, if only in my dreams

Wonder what Christmas was like over 100 years ago during World War I?

A Silent Night (Christmas 1915) was written by Irish singer-songwriter Cormac MacConnell in 1991, some 70+ years after the end of WWI; the original title was Silent Night – Christmas in the Trenches 1915.

A Silent Night (Christmas 1915) ties together refrains from popular Christmas carols, the reality of World War I for soldiers, and the remarkable story of the historical Christmas truce/ceasefire between the British, French, and German troops.

On Christmas Eve 1914 along different points of the western front of World War I, “the guns all died away“. Soldiers from both sides played games, sang carols, and in some cases exchanged prisoners, food, and souvenirs. The Christmas Truce was repeated in 1915.

All brothers hand in hand

And that young soldier sings

And the song of peace still rings

Singer Mel Tormé co-wrote The Christmas Song  / Chestnuts Roasting on an Open Fire with Robert Wells in 1945, r,eportedly in an attempt to try to cool down in the hot summertime.

As Nat King Cole sings in The Christmas Song,

To kids from one to ninety-two

Although it’s been said many

Merry Christmas to You

In the mood for some other festive favorites? You might enjoy these: