Actor Michael J. Pollard will be remembered for portraying bumbling getaway driver C. W. Moss in Bonnie and Clyde (1967), an inept motorcycle racer in Little Fauss and Big Halsy (1970), and many other distinctive characters he created for movies and on television. 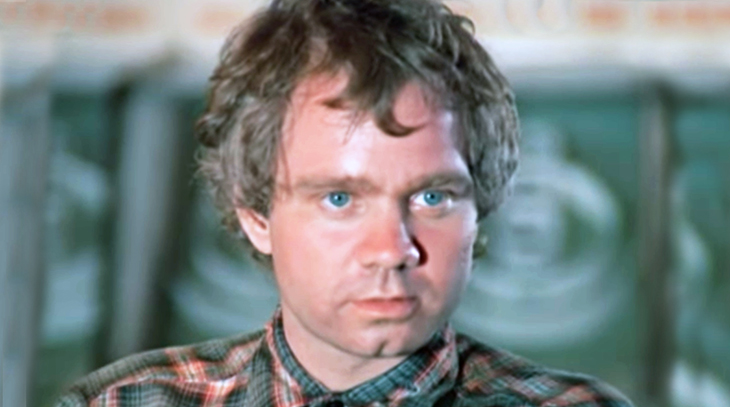 Michael J. Pollard was 80 when he died on November 20, 2019 of cardiac arrest. He is survived by son Axel Emmett Pollard from his second marriage, and daughter Holly Howland from his first marriage to actress Beth Howland (1961-1969).

Nee Michael John Pollack Jr. when he was born on May 30th, 1939, Pollard enrolled at Actors Studio in New York and changed his name along the way to success.

According to The Hollywood Reporter, Pollard also appeared on Broadway that year with Warren Beatty in Bye Bye Birdie (Dick Gautier was also in the cast). These interactions must have impressed Beatty enough to ensure Pollard was later cast in Bonnie and Clyde almost a decade later. In addition to Pollard, Faye Dunaway, and Beatty, the cast of Bonnie and Clyde includes Gene Hackman, Estelle Parsons, Denver Pyle, and Gene Wilder.

In a 1969 interview with Roger Ebert, Pollard confirmed that he couldn’t, in fact, drive a car in the movies OR in real life.

“There was this guy teaching me, but I couldn’t learn. So here I was stuck in the parking place, and Penn (the director) said, Okay, do it that way.”

In this clip from Bonnie and Clyde, Pollard (as C. W. Moss) impresses bank robbers Bonnie (Faye Dunaway) and Clyde (Beatty), and is invited to join the team.

During the 1960s Michael J. Pollard was a guest star on several popular TV shows such as The Virginian, and Channing, rubbing elbows with notable actors from these earlier days of television:

While most fans will remember Michael J. Pollard for his Best Supporting Actor Academy Award nominated performance in Bonnie and Clyde as a gas station attendant turned criminal, or as Robert Redford‘s pal in Little Fauss and Big Halsey, he was in several other 1960s films.

The Wild Angels (1966) stars Peter Fonda, Bruce Dern & Diane Ladd (at the time, married in real-life), Nancy Sinatra as Fonda’s girlfriend, and Pollard as “Pigmy“, in a fiction drama about a California motorcycle gang.

While Doris Day and Richard Harris are the romantic leads in the spy spoof Caprice (1967), character actors abound in the film. Ray Walston, Jack Kruschen, Edward Mulhare, and Larry D. Mann, all join Pollard in notable supporting roles in Caprice.

The Mirage (1965) remake Jigsaw (1968) stars Bradford Dillman as a man with amnesia courtesy of LSD-laced sugar cubes in his coffee, who hires a detective (Harry Guardino) to get to the bottom of things. Pollard is a hippie who kidnaps the detective. Hope Lange (The Ghost and Mrs. Muir), Pat Hingle, Diana Hyland, Susan Saint James, and Victor Jory are also in the cast of Jigsaw.

Michael J. Pollard co-starred with Oliver Reed in the WWII adventure-comedy Hannibal Brooks (1969). Reed and Pollard play captured soldiers working in the Munich Zoo as POW’s, who escape and take an elephant in their care with them. This trailer and review of Hannibal Brooks features Michael J. Pollard and the attempt to capitalize on his lingering fame from Bonnie and Clyde.

By the 1970s, Pollard was struggling with drug and alcohol abuse; he was still working but often seen in less prominent films and television series.

He had a starring role as Billy the Kid in Dirty Little Billy (1972), based on the early years of Billy Bonney. With Richard Evans, Lee Purcell, Charles Aidman, Gary Busey, and Dick Van Patten.

By the end of the 1980s, Pollard had cleaned up his act, but the damage to his career had been done. His film roles now were usually smaller parts, but he did appear in some bigger movies:

Although Michael J. Pollard continued working through the 1990s and 2000s, his last released film was the thriller The Woods (2012) starring Franco Nero and Mickey Rooney.

Michael J. Pollard fans will remember him for the quirky traits his characters revealed onscreen – bright blue eyes, often puckish or shy, even when dangerous.