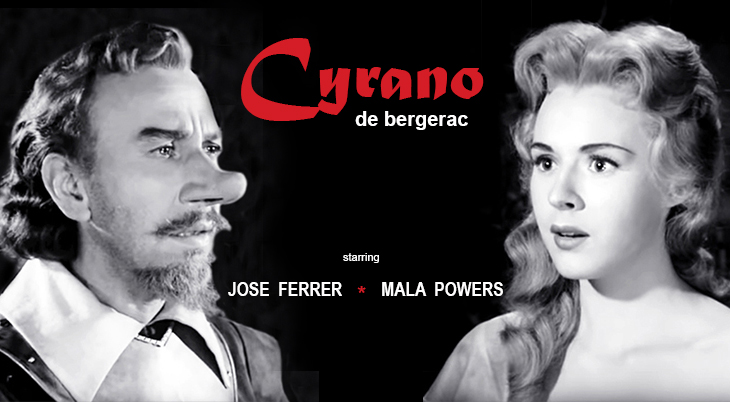 Directed by Michael Gordon, the screenplay of Cyrano de Bergerac was based on Edmond Rostand’s 1897 drama and was adapted for the movie by Carl Foreman.

Cyrano de Bergerac is a man whose poetic eloquence is only matched by the size of his nose and the brilliance of his swordsmanship. 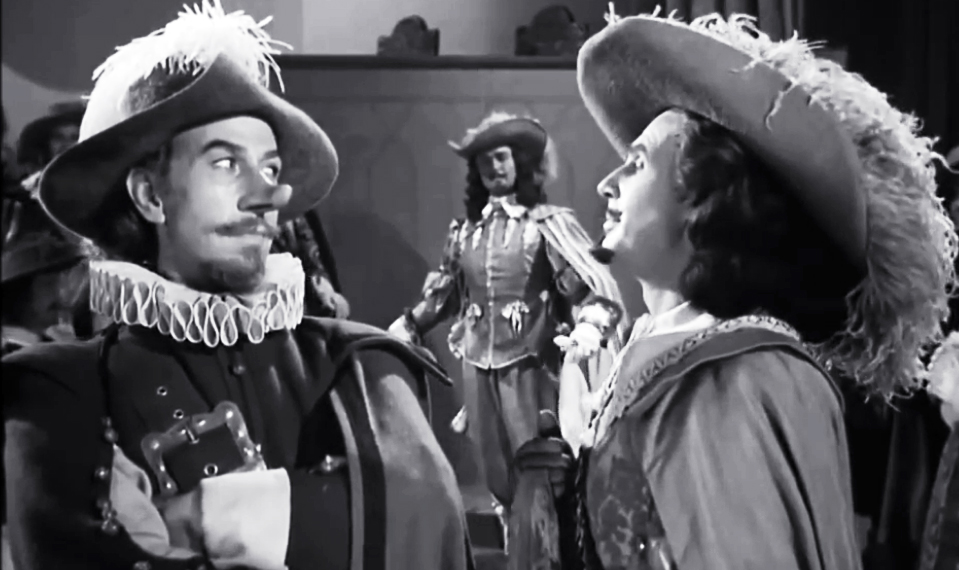 The film opens with Cyrano turning a mundane insult from French nobleman Vicomte de Valvert (Albert Cavens) into an excuse for a duel, demonstrating all of his powers of speech and sword. 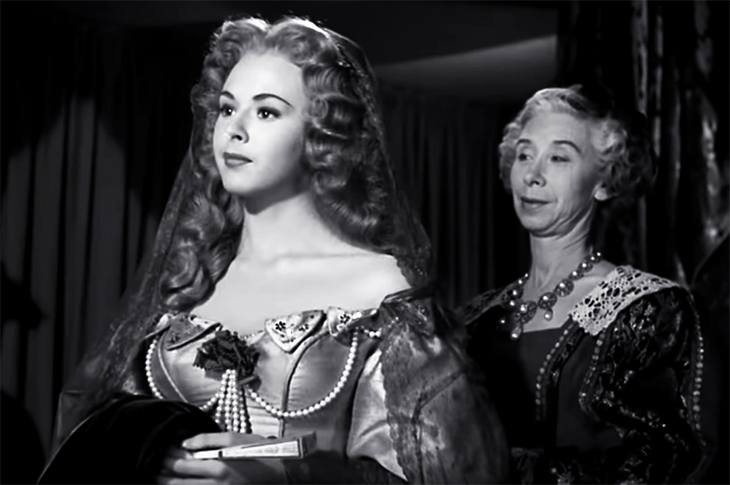 Watching the duel are his beautiful cousin Roxane (Mala Powers) and her duenna (Virginia Farmer).

Cyrano is in love with Roxane but can’t bring himself to declare his feelings, for fear of rejection. And of course, Roxane can’t see past the nose on his face (or hers) to the man inside. Roxane sends a message to Cyrano to meet her the next day. 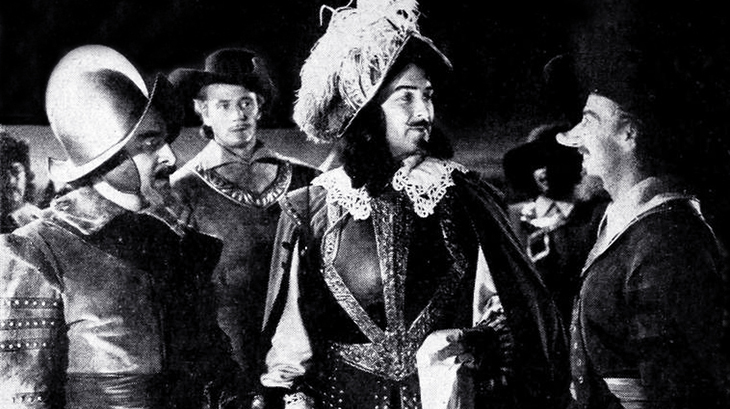 That night, the Comte de Guiche (Ralph Clanton), friend of the slain Valvert and himself an object of Cyrano‘s mockery, tries unsuccessfully to have his henchmen ambush and kill Cyrano.

Cyrano is crushed when Roxane tells him she has likes handsome young guardsman Christian de Neuvillette (William Prince) and asks him to keep Christian safe. 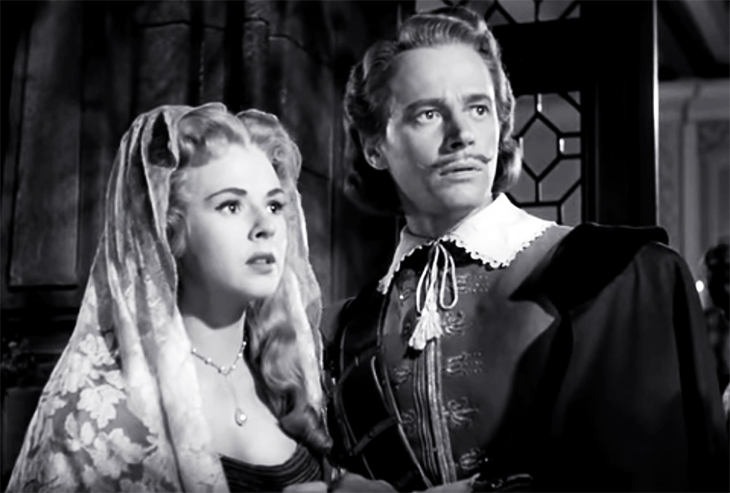 Cyrano only wants Roxane to be happy, so he helps the tongue-tied Christian court her, leading to a string of unforeseen consequences. 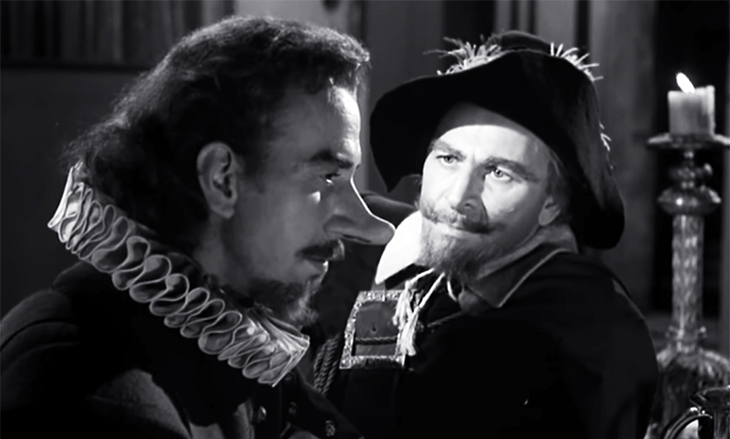 Morris Carnovsky plays Cyrano’s friend and fellow guardsman Le Bret, Lloyd Corrigan is poet and pastry chef Ragueneau, and Elena Verdugo is a servant girl who seems struck by Cyrano the man, vs the nose.

Playing some of the other minor characters in the movie are actors better known later for their television appearances – John Crawford (The Waltons), Gilman Rankin (Tombstone Territory), and Jerry Paris (The Dick Van Dyke Show). 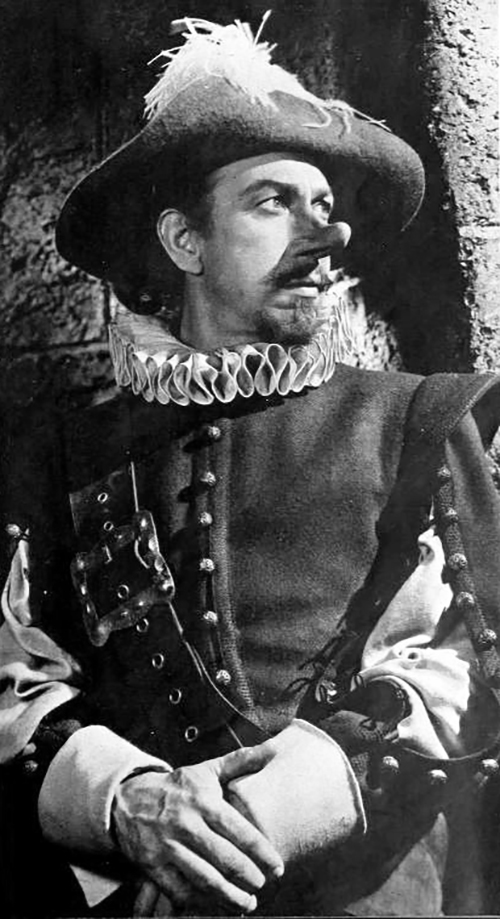 Playwright Edmond Rostand’s (translated from French to English) words trip eloquently from the lips of compelling lead actor José Ferrer in character as Cyrano de Bergerac. Rostand based Cyrano on a real person – big-nosed French satirical and fantasy writer Savinien Cyrano de Bergerac (aka Savinien de Cyrano, dit de Bergerac 1619-1655), who was reported to have indeed fought duels over the size of his nose.

Although Cyrano de Bergerac was not an instant box-office success, it was critically acclaimed. José Ferrer had previously won the Tony Award for his starring role in the 1947 stage version of the play, which had been directed by Mel Ferrer (no relation).

At the 23rd Academy Awards ceremony (for films released in 1950), José Ferrer won the Best Actor Oscar, beating out Louis Calhern (The Magnificent Yankee), William Holden (Sunset Boulevard), James Stewart (Harvey), and Spencer Tracy (Father of the Bride). This was the first Academy Award to be won by a Hispanic actor, and by a Puerto Rican-born American.

Steve Martin’s romantic comedy Roxanne (1987) is based on Cyrano de Bergerac, but made as a comedy with a Daryl Hannah, Rick Rossovich, Shelley Duvall, Fred Willard, Michael J. Pollard, and Damon Wayans.

British playwright and critic George Bernard Shaw (aka Bernard Shaw), died on November 2, 1950 at the age of 94. 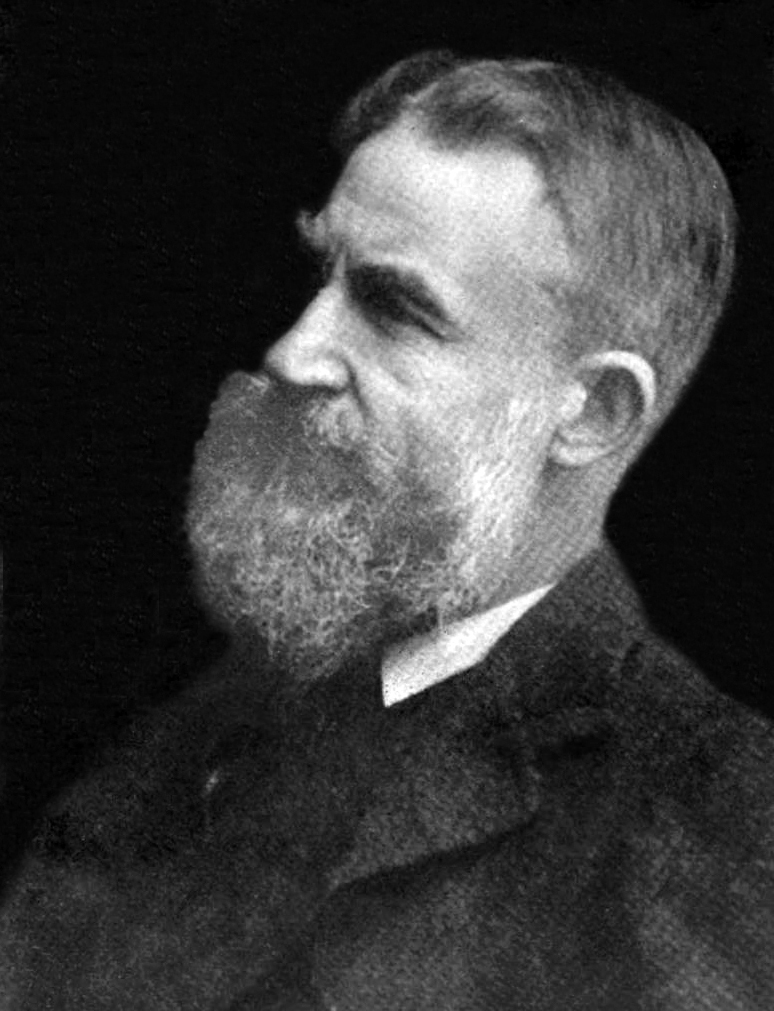 Born on July 26, 1866 in Dublin, Ireland, George Bernard Shaw’s acclaimed plays made him the most noted playwright of his lifetime, and perhaps beyond. His original works and adaptations of his plays are still being performed on stages and filmed for movies and television today

Prior to becoming a famed playwright, Shaw was best known as a music, book, and theatre critic for London newspapers and magazines beginning in the 1880s.

From 1983-1899 Shaw began to focus on writing plays, and saw his first one produced on stage that year (Widower’s Houses, originally written in 1884).

Many of George Bernard Shaw’s plays have been translated into several different languages, and have been performed on stages around the world. 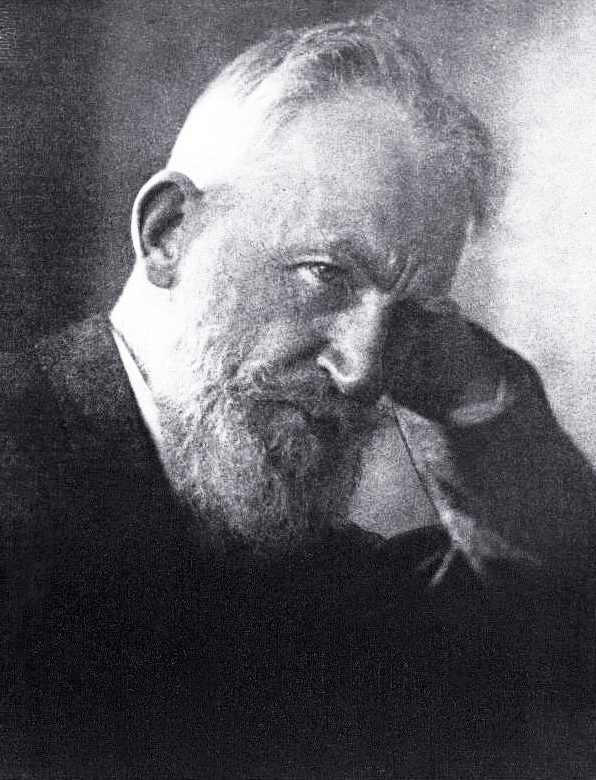 The play Shaw is most closely associated with and is the best known of his works, is Pygmalion (1913).

It has been filmed as a movie numerous times, the most famous adaptation of which is the 1964 Academy Award-winning musical My Fair Lady, starring Audrey Hepburn, Rex Harrison, Stanley Holloway, and Wilfrid Hyde-White. 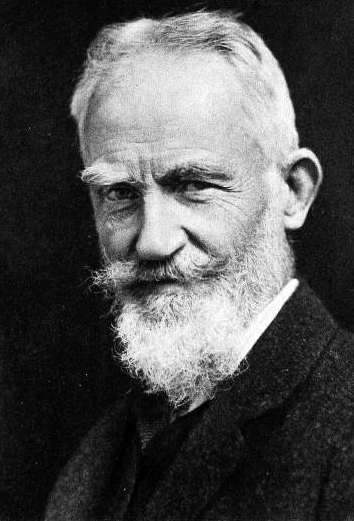 In 1925 George Bernard Shaw was awarded the Nobel Prize in Literature – likely spurred by his accumulated list of achievements and most recent acclaimed work at that time, Saint Joan.

Despite his dislike for American in general and Hollywood in particular (he visited once, in 1933 and had nothing good to say about it), Shaw’s plays were embraced by North American theatre and film producers and their audiences.

One of Bernard Shaw’s last plays, written when he was 80, is The Millionairess (1936). Several stage productions have featured well known actresses as the title Millionairess, notably Edith Evans (the play was written for her to star in), Jessie Royce Landis, and Katharine Hepburn.

The 1960 movie The Millionairess stars Sophia Loren, with Peter Sellers, Alastair Sim, Vittorio De Sica, and Dennis Price. Recently, The Billionaire (2020) starring Heather Tom, is an adaptation of the play. 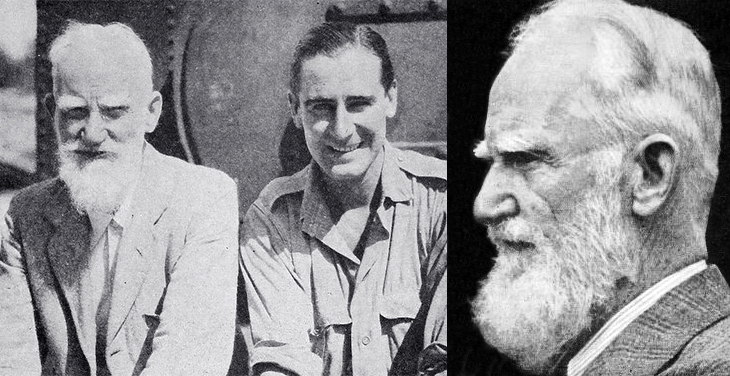 George Bernard Shaw was 94 when he died of renal failure in 1950; he was pre-deceased by his wife Charlotte in 1943. The couple had no children, having married in their early forties in what some have speculated was a marriage of friendship rather than romantic love.

Orchestra leader Sammy Kaye reached the #1 sport on Billboard the week of November 18, 1950 with his version of Harbor Lights, sung by Tony Alamo and The Kaydets.

Written by composer Hugh Williams and Jimmy Kennedy, 1950 was a big year for Harbor Lights, with recordings released by Guy Lombardo’s orchestra, Bing Crosby, and Ray Anthony’s orchestra  all making it onto the song charts with varying levels of success. 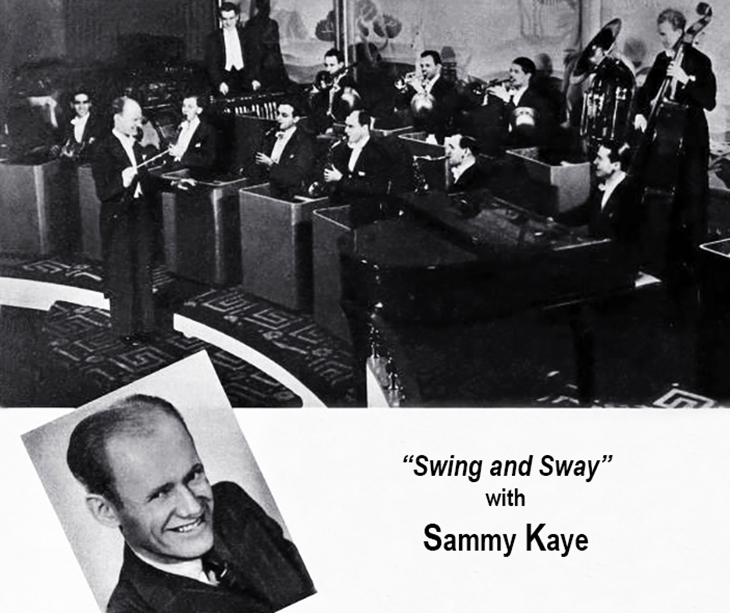 Harbor Lights had been a modest hit in 1937 when singer Frances Langford was the first to record it; her recording was followed by crooner Rudy Vallée’s version. In subsequent years, Harbor Lights was recorded by the likes of Elvis Presley, The Ink Spots, Ken Griffin, Lawrence Welk, Engelbert Humperdinck, Vera Lynn, Jerry Lee Lewis, and Willie Nelson. The Platters 1960 recording of Harbor Lights was a #8 hit single on Billboard. 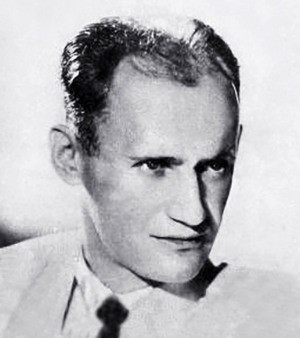 In the 1950s Sammy hosted different radio and television series (So You Want to Lead a Band; The Sammy Kaye Show), and continued to perform in the ’60s and ’70s. Sammy Kaye was 77 years old when he died in 1987.