Her parents were of Bolivian (father Armando was an aeronautical engineer) and English (mother Josephine) descent.

Raquel studied ballet until at age 17, when according to her 2010 autobiography/self-help book Beyond the Cleavage, her ballet instructor told her she would make a better comedienne than ballerina.

While in high school, Raquel entered and won some minor beauty contests beginning at age 14, including “Miss Fairest of the Fair” at the San Diego County Fair.

Virginal cheerleader Raquel and her football player boyfriend Jim Welch went to all the post-football game school dances and jitterbugged.

Jim Welch dropped out of high school in their senior year and jumped on a tuna clipper to Peru. 17-year-old Raquel finished her senior year of high school by herself, graduated in 1958 with honours and attended San Diego State College on a theatre arts scholarship. When Jim Welch returned from Peru, Raquel was dazzled by his matured good looks. Raquel Tejada and Jim Welch eloped to Las Vegas, getting married on May 8, 1959.

Raquel got a job as a morning show weather girl on a San Diego news channel and began modelling, but she soon began to suffer morning sickness.

Their son Damon Welch was born in November 6, 1959 when Raquel was 19, and daughter Latanne Welch (later called Tahnee, the same name as Jim’s mother; now and actress) was born two years later, December 1961.

When the Welch marriage broke up (they separated in 1962), Raquel briefly moved to Texas with the two children before moving back to California and settling in Los Angeles in 1963.

Once in Los Angeles, Raquel Welch quickly met former Gone With the Wind child actor-turned-publicist Patrick Curtis, and he soon became her manager. They formed a production company to create vehicles for Raquel, and planned how to make her a sex symbol.

By 1964 Raquel Welch was now divorced from Jim, a single mother of two, and finding work with bit parts on television (Bewitched) and in movies (Roustabout, uncredited).

Although Welch is better known today for her feature films, she could be seen in guest-starring or bit parts on television on several 1964-1965 series:

She had only 3 lines in her next big-screen movie (filmed in Europe) that same year, but it was enough. One Million Years B.C. – the movie and an accompanying poster of Raquel Welch in a fur skin bikini – launched her as a major sex symbol in the 1960’s and 70’s. This movie trailer for One Million Years B.C. features Raquel Welch, John Richardson – and some very dated special effects.

Patrick Curtis and Raquel Welch were married in Paris in 1967, and Patrick Curtis adopted her two children. Raquel acknowledged in later interviews that being the husband of Raquel Welch would have been hard on any man, but from her perspective, she was happy to be free from his control when they divorced in 1972.

Below, Raquel Welch co-starred with Frank Sinatra (as Tony Rome) in Lady in Cement (1968). 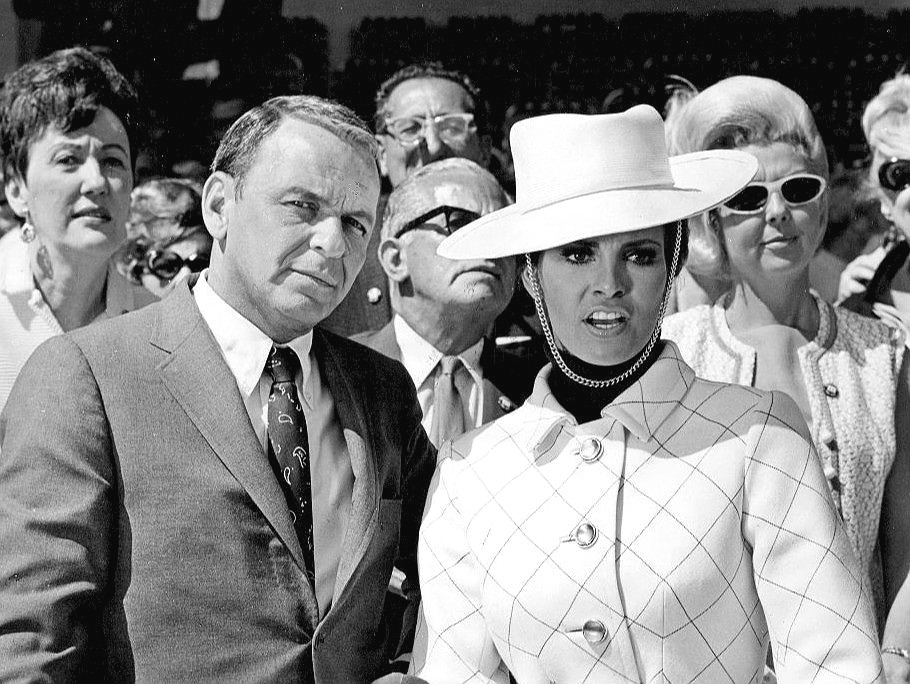 Raquel Welch’s acting career continued throughout the 1960’s, with some larger parts in a few big-screen westerns:

During the 1970’s Raquel Welch made more films, but her career as a movie star never really took off. She appeared in some hits and misses: 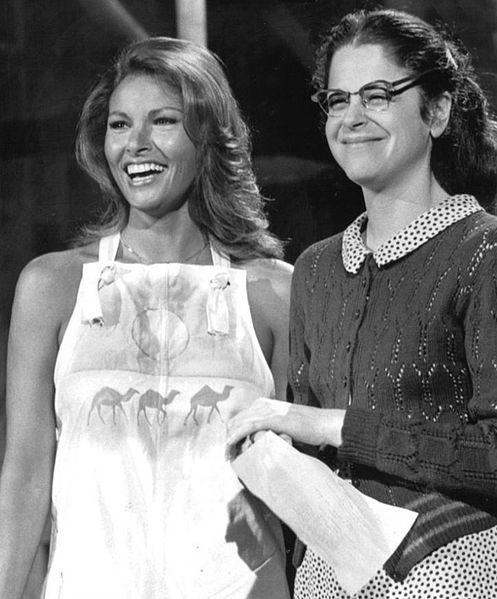 As the 1970’s progressed, Raquel Welch’s time on the big screens was winding down.

She appeared on Saturday Night Live in a sketch with Gilda Radner in 1976.

A few years later, she was on the cover of Playboy magazine in 1979 when she was 39 years old.

Playboy named her the “Most Desired Woman” of the 1970’s. 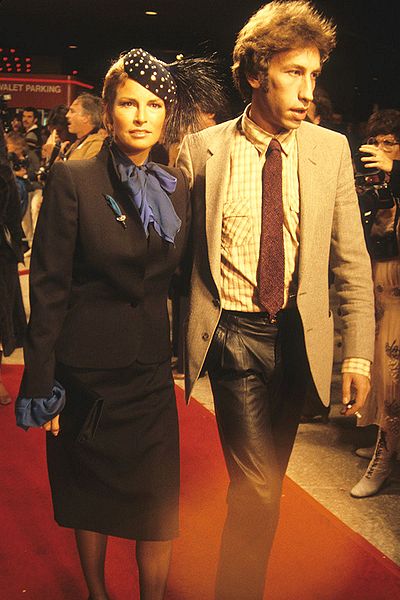 Ironically, 3 years after her Playboy cover, Raquel Welch was a few days into production of the movie Cannery Row (1982) when the producers replaced her with Debra Winger, telling her she was too old to play the character. Raquel sued and won a $10.8 million settlement in 1986.

Television director, producer, photographer and journalist Andre Weinfeld was only 31 but already successful in his native France when he met 37-year-old Raquel Welch during the filming of L’Animal (1977) on location in Paris.

When filming on L’Animal  ended, Andre Weinfeld moved to Los Angeles to be with Raquel, and started his own production company.

For most of the 1980’s Raquel Welch’s film appearances were limited to a handful of TV movies. 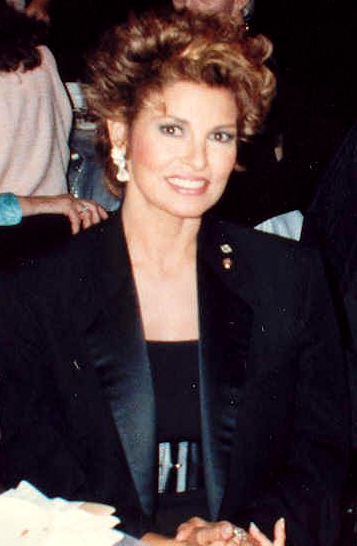 In her fifties, Raquel launched The Raquel Welch Hair Collection (available through Hair U Wear) company in the 1990’s, which is still in business today. She also continued to act on television, making appearances on television shows and made-for-tv movies.

Raquel Welch’s big-screen movie career was re-launched with a supporting role in the comedy  Chairman of the Board (1998).

In 1999 at age 59, Raquel Welch married her fourth husband, 43-year-old pizza-chain restaurateur Richard Palmer. They separated in 2003 but have remained married.

As she was turning the corner into her sixties, Playboy ranked Raquel Welch #3 on their 100 Sexiest Stars of the Twentieth Century, and she appeared in Legally Blonde (2001).

Raquel’s sister had cancer in 2005; now a senior citizen, Welch was inspired to work with Hair U Wear to annually donate $1  million in wigs annually to the American Cancer Society. 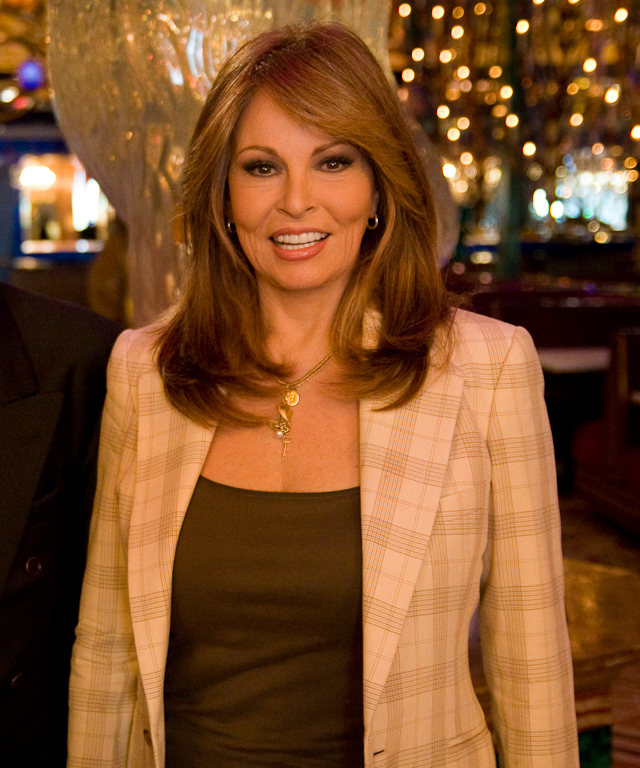 She became the face of MAC cosmetics Beauty Icon product line in 2007, and a spokeswoman for Foster Grant’s reading glasses campaign (something that will resonate with a lot of 50+ baby boomers and senior citizens).

In her seventies, Raquel Welch has authored the book Beyond the Cleavage, part memoir, part inspirational/self-help for health, beauty and longevity.

During an Oprah Winfrey show interview that year to promoted the book, Welch urged urged women to feel comfortable with growing old.

“I want them to stop being scared of it, because it’s just another chapter in life.“

In 2011 Men’s Health magazine named her as #2 on their list of Hottest Women of All Time, and Time magazine listed her One Million Years B.C. bikini in the Top Ten Bikinis in Pop Culture.

As a septuagenarian senior citizen, she’s not slacking off on her commitment to her body and health either – at age 74 in 2014, she told Jason Chester for mailonline.com that she spends almost 2 hours a day on cardio exercises and yoga (which she discovered when she was 35), six days a week.