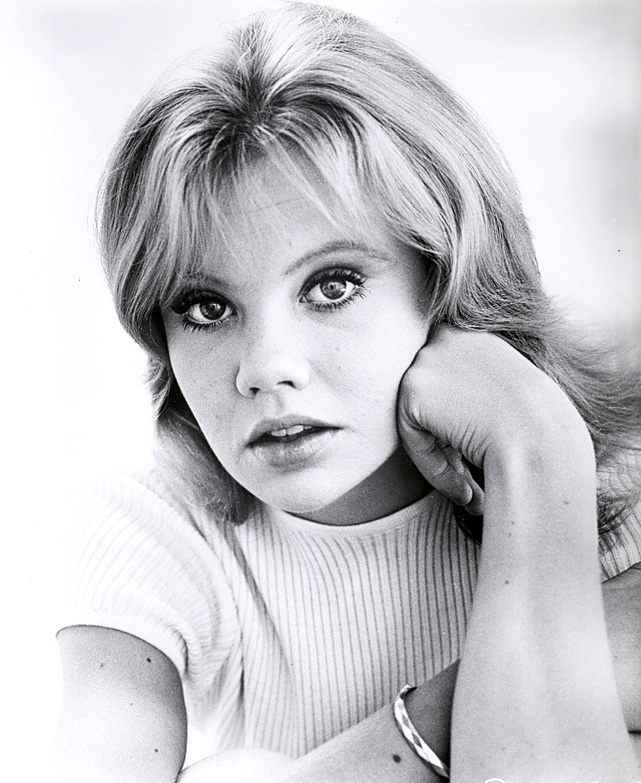 Hayley’s older sister Juliet Mills is also an actress. Not surprisingly, Hayley Mills began acting as a child at age 12, playing the role of a witness to a murder in the mystery/thriller movie Tiger Bay (1959).

Hayley Mills won the BAFTA Most Promising Newcomer to Film Award in 1960 for her performance in Tiger Bay, which had also brought her to the attention of the Walt Disney Studios.

Mills’ character looks innocent in the Tiger Bay scene below with co-star Horst Buchholz, but in reality her character is a mischievous brat who gets in over her head when she tries to help an attractive, conflicted murder (Buchholz). It’s hard to know whether you’re supposed to like her character or not as you watch the film. 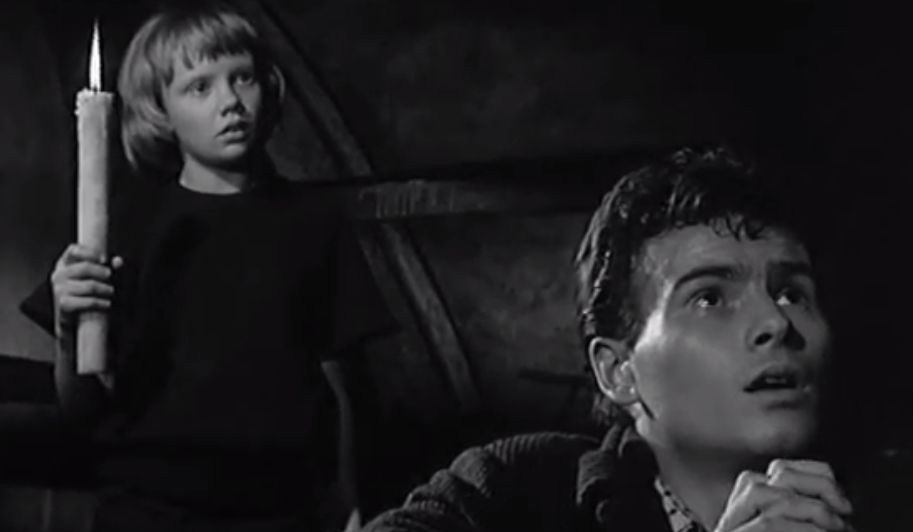 Hayley Mills’ first Disney movie in her 6-year contract with Walt Disney Studios saw her starring in Pollyanna (1960), for which she won a special Academy “Juvenile” Award. 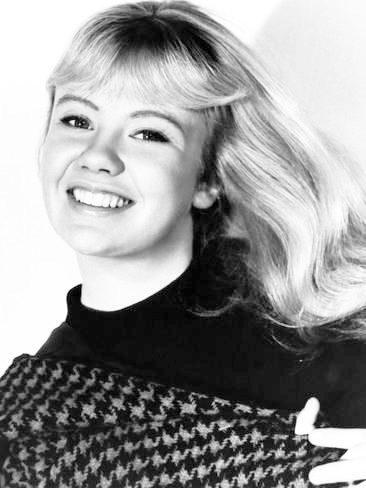 Below, Hayley Mills as mischevious twins Susan Evers and Sharon McKendrick in a scene from The Parent Trap. 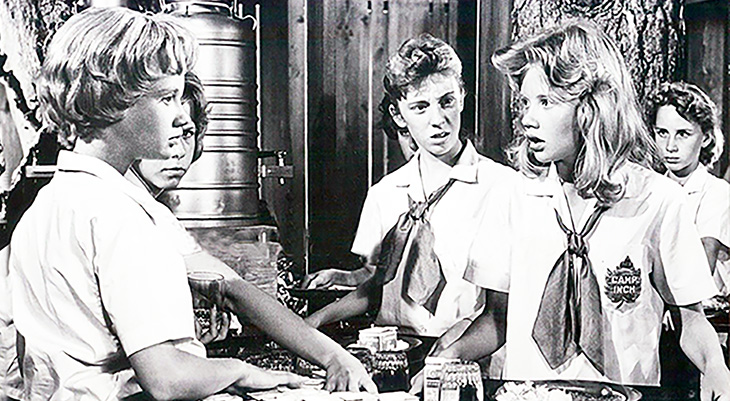 It was a lot of pressure for a young actress, and a grown-up Hayley Mills later confessed in an interview with People magazine in 1997 that she had developed an eating disorder while filming The Moon-Spinners, that didn’t go away until her first pregnancy. Below, the Disney Movies on Demand trailer for The Moon-Spinners features Hayley Mills as Nicky Ferris and actor Peter McEnery as her romantic interest Mark Camford.

Hayley Mills starred in non-Disney movies during this time as well, including:

Hayley Mills returned to Britain after filming The Trouble With Angels – she was growing up and wanted to take on more adult roles. She co-worked with her father John Mills in two more movies before the 1960’s ended:

During filming of The Family Way, 19-year-old Hayley Mills met the film’s director, married 52-year-old Roy Boulting. According to an interview with People magazine 1975, they began a relationship after filming of The Family Way ended, and before Boulting’s divorce from his third wife was finalized. The couple lived together for five years before marrying in 1971. Their son Crispian Mills – Hayley’s 1st child, Boulting’s 8th – was born in January 1973; today Crispian is a professional musician. Hayley Mills and Roy Boulting separated in 1975.

Hayley Mill’s popularity at the movie theater waned after 1966, although she continued to act in mostly British movies until taking a break in 1975. None of her later films achieved the critical or commercial success of her early efforts as a child and teenager. Mills had made her stage debut in a production of Peter Pan in London’s West End in 1966, and could be seen frequently on stage in England throughout the 1970’s, 1980’s, and 1990’s.

During a 1975 West End production of A Touch of Spring, Mills met British actor (Alan) Leigh Lawson, and they began a relationship.  Lawson was divorced from his first wife Mandy in 1976, and Mills gave birth to their son Jason Lawson that year. Mills and Boulting were divorced in 1977, but although Hayley Mills and Leigh Lawson continued their relationship until around 1984, they never married.

During her absence from the movie screens between 1975-1988, Hayley Mills appeared on television in occasional guest-starring roles (3 episodes of The Love Boat between 1979-1985), and in some made-for-television movies such as Disney’s The Parent Trap II (1986).

In 1987, Mills starred in 13 episodes of the Disney Channel TV series Good Morning, Miss Bliss, before the show was cancelled. 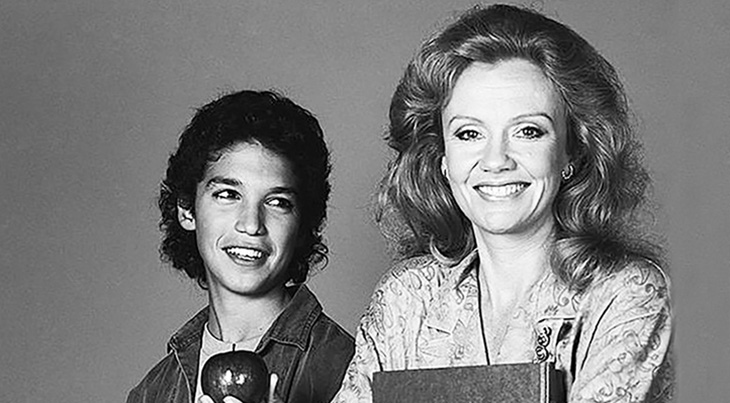 Hayley’s sister Juliet Mills married 18-years-younger actor Maxwell Caulfield in 1980 (they are still married today). Caulfield’s brother Marcus Maclaine and Hayley Mills had a romantic relationship for around 12 years, from 1985 to 1997. During their relationship, Marcus Maclaine helped Hayley Mills edit her book My God (1988), in which celebrities explore their beliefs via letters. Maclaine was also briefly in a band with Mill’s son Crispian, Objects of Desire. Hayley Mills and Marcus Maclain broke up in 1997.

Appointment With Death was not commercially successful, and none of the subsequent movies Mills has appeared in since then have broken that mold. She toured Australia with a production of The King and I in 1991, and starred in another production of the The King and I again in 1997. 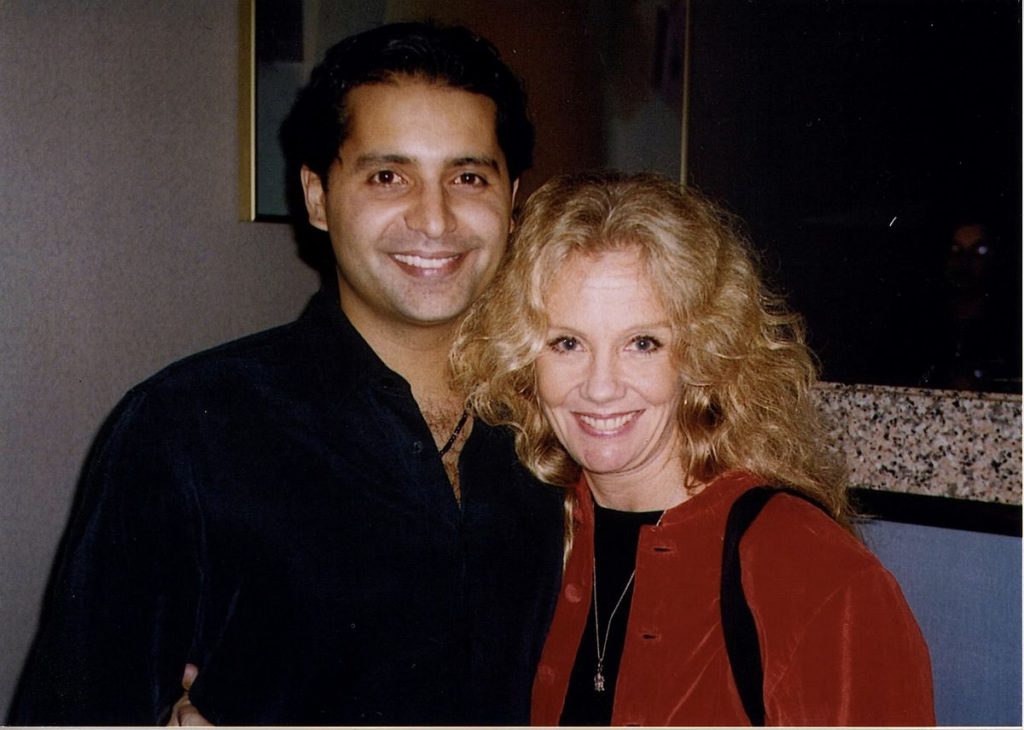 In the years since then, Hayley Mills has continued to focus her acting efforts on the stage, with a few forays into television. She co-starred for 6 years on the British TV series Wild at Heart (2007-2012).

In 2008 Mills underwent surgery for breast cancer and despite not being able to complete chemotherapy, has been in remission since 2012.

As a senior citizen, Hayley Mills is still acting on television (Midsomer Murders, 2014), in the movies – Foster (2011) alongside stars Toni Collette and Ioan Gruffud – and on stage.

In 2015, Hayley Mills, her sister Juliet Mills and her brother-in-law Maxwell Caulfield, toured Australia in production of Legends!, about two older, feuding movie stars. Below, sisters Hayley Mills and Juliet Mills provided insights from their careers to Australian radio station 4KQ Brisbane in 2015.

Hayley Mills is now a grandmother 3 times over.

I first saw Hayley Mills in the movie Parent Trap, when I first showed it to my children. I had bought some old VHS tapes at a thrift shop and that was in the bunch. I thought she was so adorable. It is one of our favorite movies. Now recently, I discovered the movie, Pollyanna. It may seem crazy that I never knew of the movie before and I was born in 1970. But for some reason, I hadn't been exposed to it. Well, I discovered it on Amazon Prime Video. It was SUCH a great film. I made sure my kids and hubby watched it too. I cried and cried. She is just a delight to watch on the screen. And then just recently, I've seen Moon Spinners. LOVED that film also. Seeing her as a teen, more like 16 and how she blossomed. She is just simply adorable and I am now a fan. This is how I came across this website today. I can see that there are many fans of Hayley through the years. There is something about her and the way she comes across on the screen. So cute and unpretentious. She really does make you want to be like her. And I'm 48 years old!!! But I honestly would love to emulate her effervescence and I hope that I do! I'm also SO happy that I've found a wonderful large amount of films to watch that she starred in and they are wholesome films that I can show my kids, and we can all enjoy!

Pollyanna is a movie I watch over and over. I could have been her twin, in younger years. I remember my mothers friends calling and telling her she had to see Pollyanna because the girl who plays her, looks just like me! That's probably why I loved her, and still do, so much. She brought a lot of joy in a dreadful young life.

I Have been a big fan of Haley Mills since "Tiger Bay" have seen all your movies and have been collecting the DVD's of them,I have about half of your films, I met you in Toronto in the Mid 70's where you where appearing in the play Rebecca as Mrs DE Winter, I also met your Mum & Dad in Hamilton a year or two earlier, what a great family, your father was my favorite actor until you came along

I too am such a big fan of Haley. Starting with Pollyanna and every movie made after. Loved Whistle Down the Wind. I didn't know it was Hayley's mother who wrote it Thank you, Hayley, for being such a wonderful role model for a young girl growing up in the 60's. It was lovely having someone like you to look up to and be inspired by. You still look fabulous and forever young!

I too had a crush on Hayley. She was always the model for any girl I dated. I first saw Hayley in Parent Trap and I never recovered. Even today looking at her photos on the web I could remember how I felt 50+ years ago. Hayley thank you for keeping it pure and wonderful. You were a great example of a wonderful developing young lady. Thank you with all my heart for being you. Your mother was also a beautiful wonderful woman.

I had the biggest crush on you after seeing you in Tiger Bay. I started collecting any and all magazines the featured you on the cover, reading everything I could about you. I have seen all your movies at least twice, Tiger bay still remains my favorite. Congratulations on your 71st birthday. Wishing you continued good health and happiness

Hayley, I have been one of your biggest fans since I was about 8. I have seen every one of your movies, have about 300 movie magazines in my basement with you on the cover or in them, cut my hair in the same style as yours when you changed it...and even read a scene in a high school audition from the Chalk Garden. I few years ago I held a Hayley Mills movie night at a high school reunion for other classmates that loved you as well! You were a huge influence in my life growing up and you will remain my favorite movie star! Thanks you for all the smiles through the years! All the best, BONNIE MINER BILLINGTON

I think Hayley Mills parents deprived her of the important experience of receiving her Oscar. It was mean to deny her thr trip to the Oscar Awards and they even didn't tell her she won it. Stupid, ignorant parents.

Happy Birthday! Haley Mills,
This is the first time I have told you that I am a fan since your first movie when we were 12 years old! Yes, We...
I am 18 days older than you. Also a blonde, but green eyes. I thought you were so cute that I wished I looked like you! Of course that didn't happen, so I have managed how I look all these years. Well, how do you feel being 70? I hope you are feeling great and keep your hair blonde. I am keeping mine blonde, not going gray yet! Stay safe and best wishes for many more happy years!
Your biggest 70 year old fan! In Savannah, Georgia, USA
Claudia
Just saw you on Murder She Wrote tonight!