Q1. Was the character of Ricky Ricardo, Jr. (Little Ricky) on the I Love Lucy television show ever played by Lucy and Desi Arnaz’s real child, Desi Arnaz, Jr.?

Q2. Was I Love Lucy filmed in front of a live studio audience in New York, or with a laugh track? 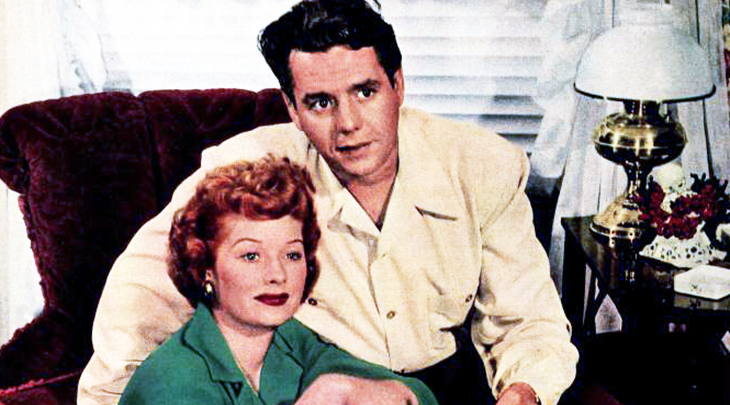 When I Love Lucy debuted on October 15, 1951, no one could have predicted it would not only become tremendously popular in it’s own era (it was the #1 show for 4 of it’s 6 seasons and won 5 Emmy Awards), but would become so beloved by future generations – baby boomers, zoomers, generations x, y & z, who watched it in re-runs, that it would be named the Best TV Show of All Time (2012 survey by ABC News and People Magazine).

After the 1/2 hour original I Love Lucy series ended, it was replaced with an 1 hour long show called The Luci-Desi Comedy Hour, which ran for another 3 years. 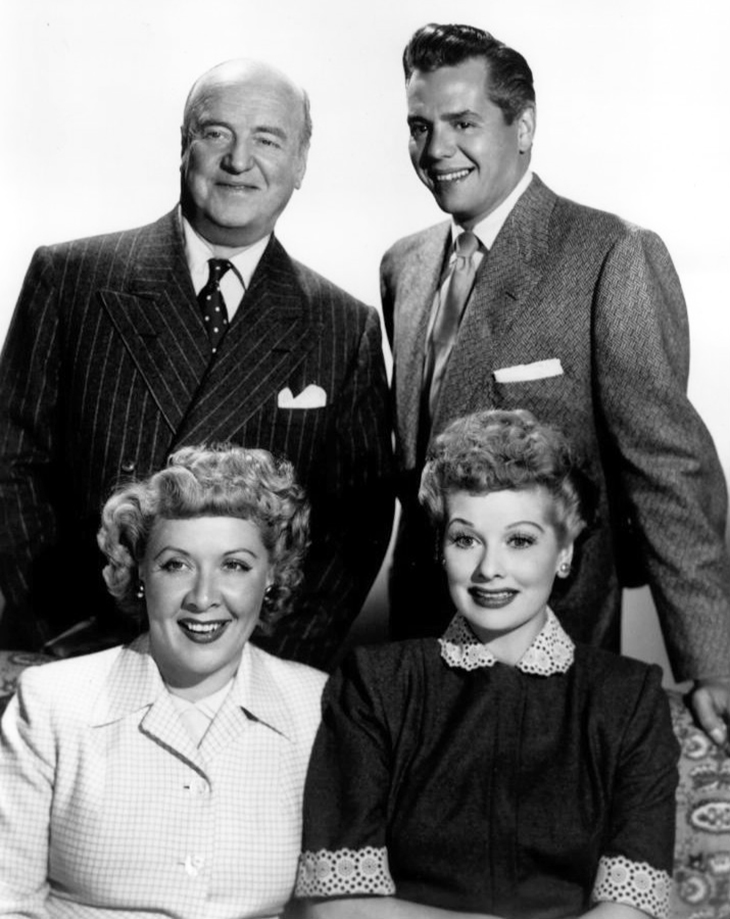 Off-air, neither couple was a happy one. Real-life married couple Lucille Ball and Desi Arnaz fought frequently, and when the I Love Lucy sequel series The Luci-Desi Comedy Hour ended in 1960, Lucille Ball filed for divorce the next day. Co-stars Vivian Vance and William Frawley did not get along either off-air; Frawley was 22 years her senior, and a curmudgeonly alcoholic. 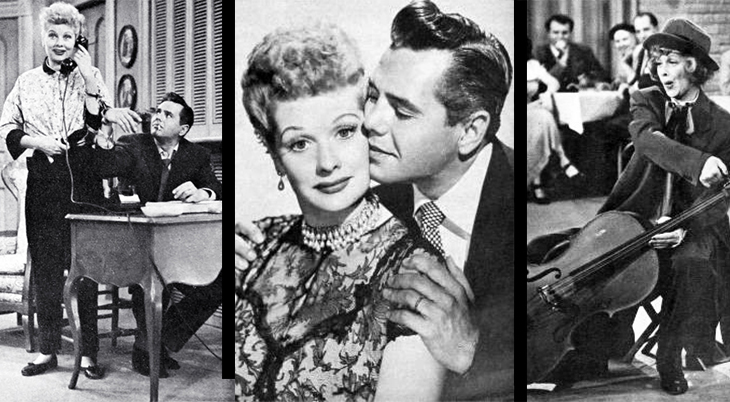 Most memorable episodes? Everybody has their own favourite, but some of the most popular include Lucy Does a TV Commercial – with Ball acting as the “Vitameatavegamin girl“; Job Switching, with Lucy and Ethel working the assembly line at a candy factory; Harpo Marx, with guest star Harpo Marx mirroring Lucy, and Lucy’s Italian Movie, with Lucy stomping grapes at a local winery as she researches her role.

The highest rated episode of the I Love Lucy television show was Lucy Goes to the Hospital, in which Lucy gives birth to Ricky Ricardo Jr.; 71.7 of all television households were tuned in to watch the episode, a rating only exceeded by Elvis Presley‘s first appearance on The Ed Sullivan Show.

A1. No. Although Lucille Ball’s real-life pregnancy was written into the I Love Lucy television show for her character Lucy, her real-life son Desi Arnaz Jr. never appeared on the show. 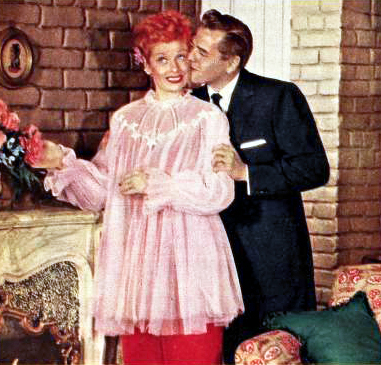 Little Ricky was played by two different sets of twins when his character was still a baby and then a toddler. Desi Arnaz discovered gifted child drummer Keith Thibodeau when he was touring with the Horace Heidt Orchestra at age 3, making $500/week playing the drums, and Keith played 6-year-old Little Rickey on I Love Lucy, where he often played the drums.

Desi Arnaz Jr. grew up to become a drummer and actor himself. Interesting period fact: At the time, CBS would not allow the word “pregnant” to be  used on-air….so the term “expecting” was used in it’s place.

A2. Although most sit-coms at the time used a laugh track and were filmed in New York city using 1 camera and shown on kinescopes to west coast audiences, I Love Lucy was filmed in Hollywood, California. 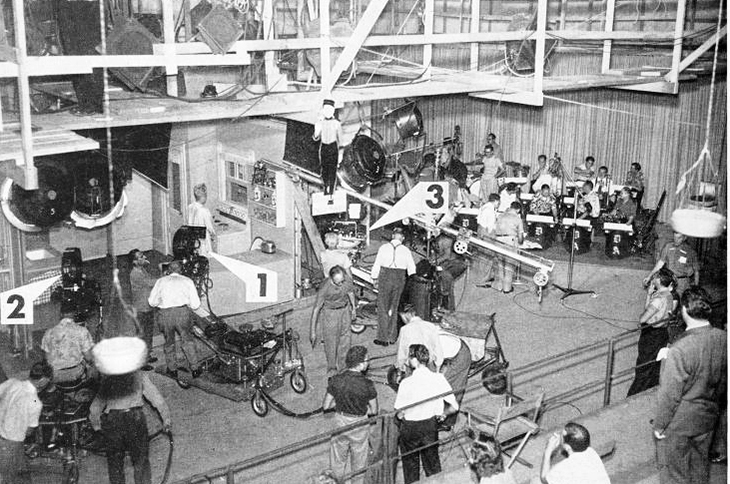 Filming took place in front of a live studio audience, using 3 Mitchell BNC cameras shooting simultaneously with 35mm film to ensure a high quality video for both east and west coast viewers. All lighting was from overhead, with units mounted so that they can be quickly changed. Camera 1 in center made all of the long shots, and cameras 2 and 3 did closeups. 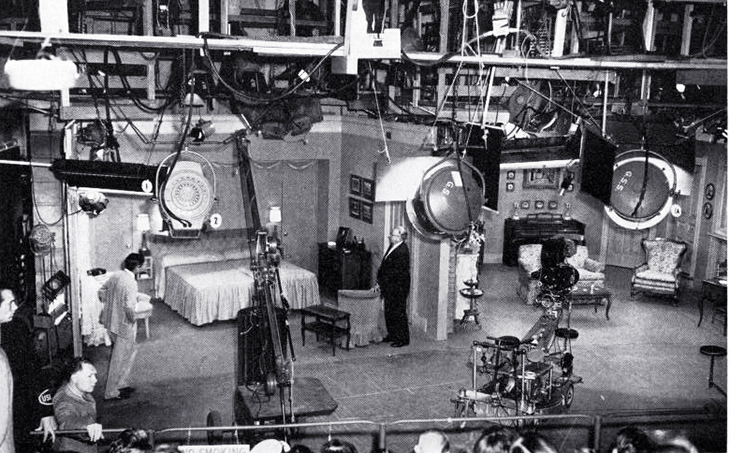 (I Love Lucy Set 1952 Photo: Journal of the Society of Motion Picture Engineers)

These I Love Lucy pioneering filming differences from the norm, would become the new standard for television sit-com filming. Lucy and Desi wanted to remain based in Hollywood, which required some changes in the filming process to accommodate both east and west-coast audiences, and produce a dynamic complete episode. 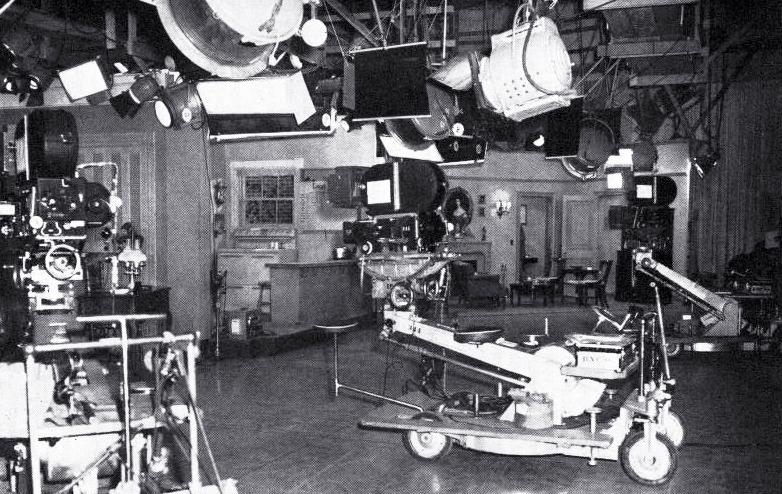 (I Love Lucy Set 1952 Photo: Journal of the Society of Motion Picture Engineers)