When Every Day is April Fool's Day

Vintage cartoons, funny stuff (unintentional and otherwise), and an assortment of the odd and unusual from the land of filmdom. 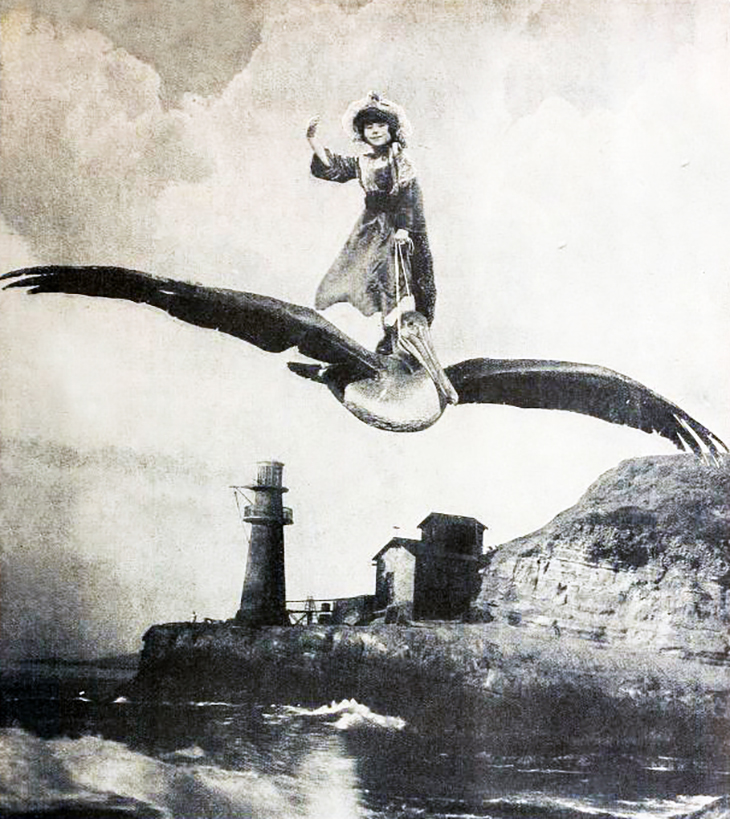 Based on the 1891 children’s book Captain January by Laura E. Richards, the 1924 silent movie of the same name stars Hobart Bosworth as old lighthouse keeper “Daddy Jeremiah“, who rescues a little girl “Captain January” (Baby Peggy) washed up on the shore from a wreckage. 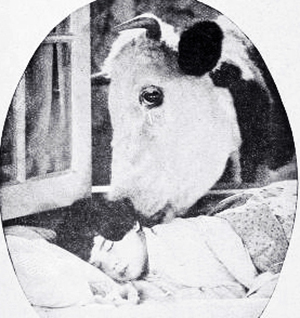 Jeremiah adopts her, and with the help of a motherly cow, he takes care of Captain January, and she of him.

All is well until her Aunt Isabelle (Irene Rich) and Uncle Herbert (John Merkyl) show up. 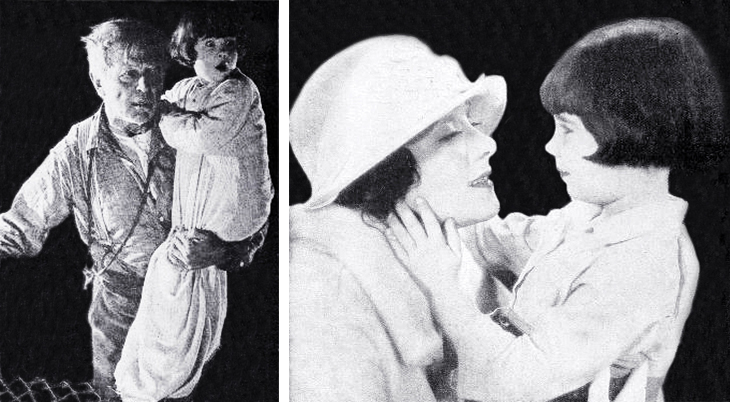 So popular was this film that it has been preserved in the Library of Congress. Shirley Temple and Guy Kibbee starred in the equally popular 1936 re-make of Captain January, with supporting actors Buddy Ebsen, Slim Summerville, Jane Darwell, among others.

And no, Baby Peggy didn’t really fly the movie stunt bird Pete the Pelican, although it was a dream sequence in Captain January.

When Hair is a Hat

COVID-19 restrictions have not been kind to those of use who haven’t been able to indulge in our regularly scheduled and necessary haircuts at the hands of a skilled barber or hairstylist. 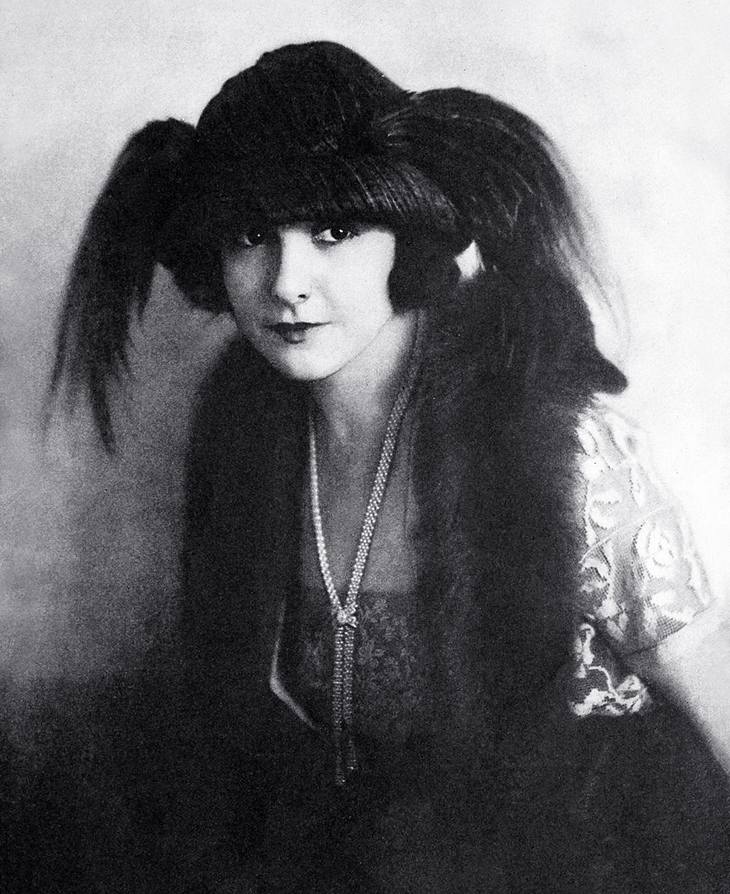 Silent film star Norma Talmadge models the latest vogue in hat styles in 1920. You can take comfort that your own hair isn’t the weirdest thing to be seen on a human head in the history of mankind.

Chicago must have been a hotbed of vice from 1913-1918; Police Chief Gleason and Major Funkhouser instituted several measures to crack down on the threat to virtue of roving spinsters and bachelors. 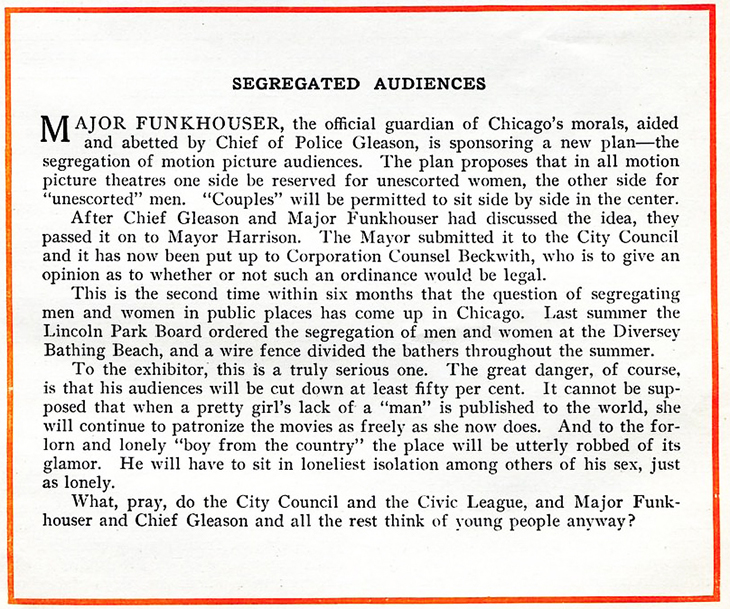 In 1914, men and women bathers at Chicago’s Diversey Bathing Beach were separated by a wire fence; the following year, they proposed that single men would be seated on one side of the movie theatres, and single women on the other, although couples could sit side by side. Funkhouser also thought movie censorship didn’t go far enough, and Chicago movie theatres made additional, extensive cuts to films before playing them.

After their night of carousing and makin’ whoopee, stern taskmaster Samuel Goldwyn strapped his chorus cowboys and cowgirls to a board. He even shone bright lights on them to turn up the heat and make them think twice about doing it again. 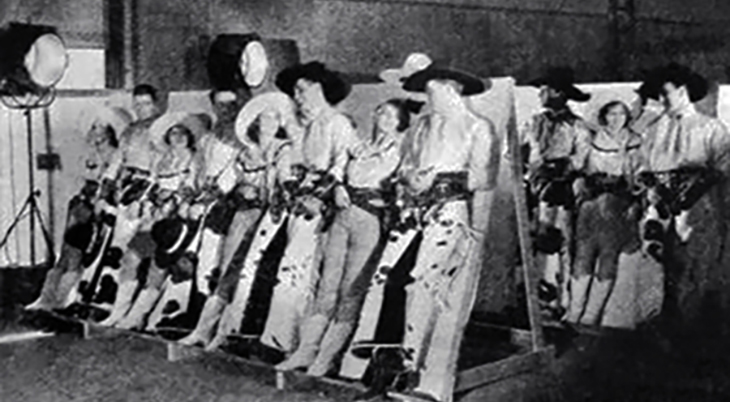 April Fool! The chorus girls and boys of the Whoopee! (1930) cast are simply resting between scenes of filming the Florenz Ziegfeld/Samuel Goldwyn musical. Specially built reclining rest forms were designed to save their tight velvet costumes from being spoiled. Sure looks funny though.

Shirley Mason was a very pretty actress, and this magazine cover painting by artist Hamilton King doesn’t do her (or him) justice. Here she is holding her novelty pet Pikitten, a new breed of cat with a pig-shaped nose, that never became popular and thus died out 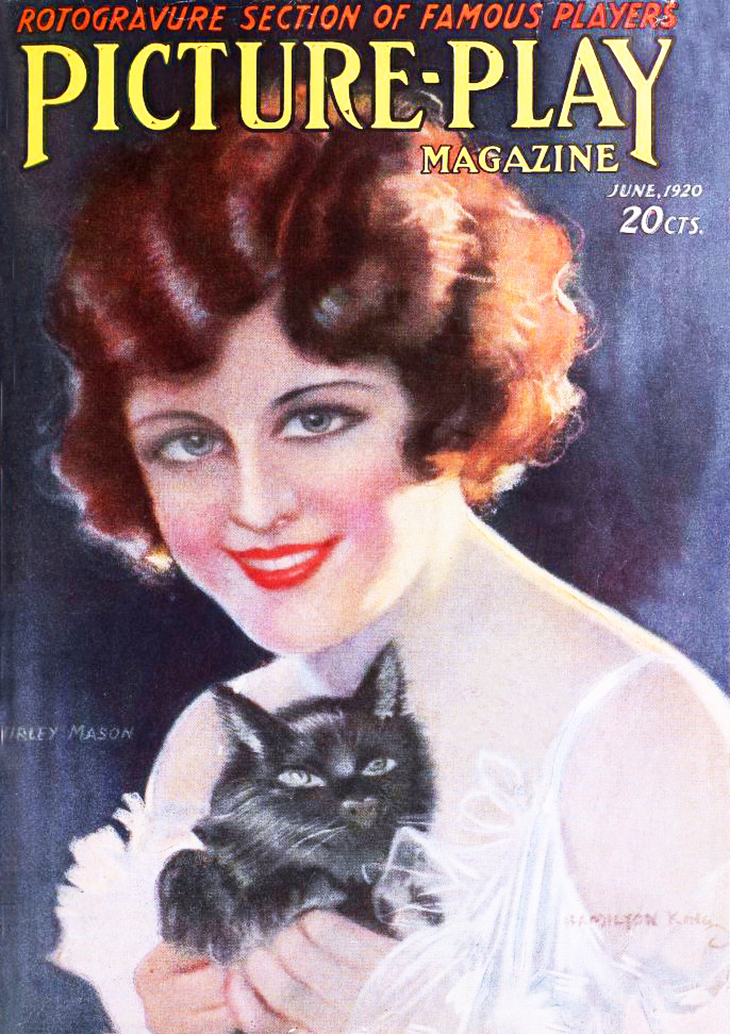 April Fool again! But that pig’s snout on the kitten is really odd looking IMO. Hamilton King (b. 1871-1941) was a well-respected portrait artist and illustrator (his works are in the Metropolitan Museum of Art & Smithsonian), so maybe it’s just kittens that he couldn’t get the hang of.

Thanks to his widow, since 1965 the Society of Illustrators has handed out a Hamilton King Award to a society member that contributes the “best illustration” in their annual exhibition.

Silent film-goers took their lives in their hands when they ventured into their local movie theatre in 1914. 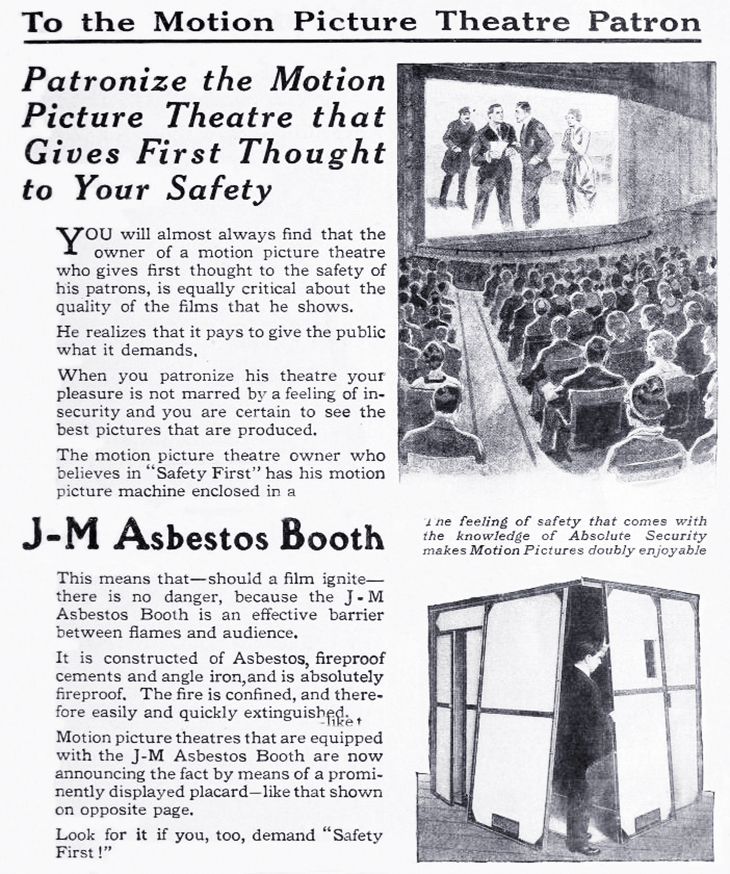 Asbestos is NOT safe; if the spool of nitrate film didn’t burst into flame while they were watching a movie (it was highly flammable, watch Tarantino’s Inglourious Basterds, 2009) and kill them sooner, then the fireproof asbestos booth that the poor projectionist worked in, might have killed them from cancer later.

Unsurprisingly, this daring “true confession” style film Men Who Have Made Love to Me was banned in some cities when it was released back in 1919. 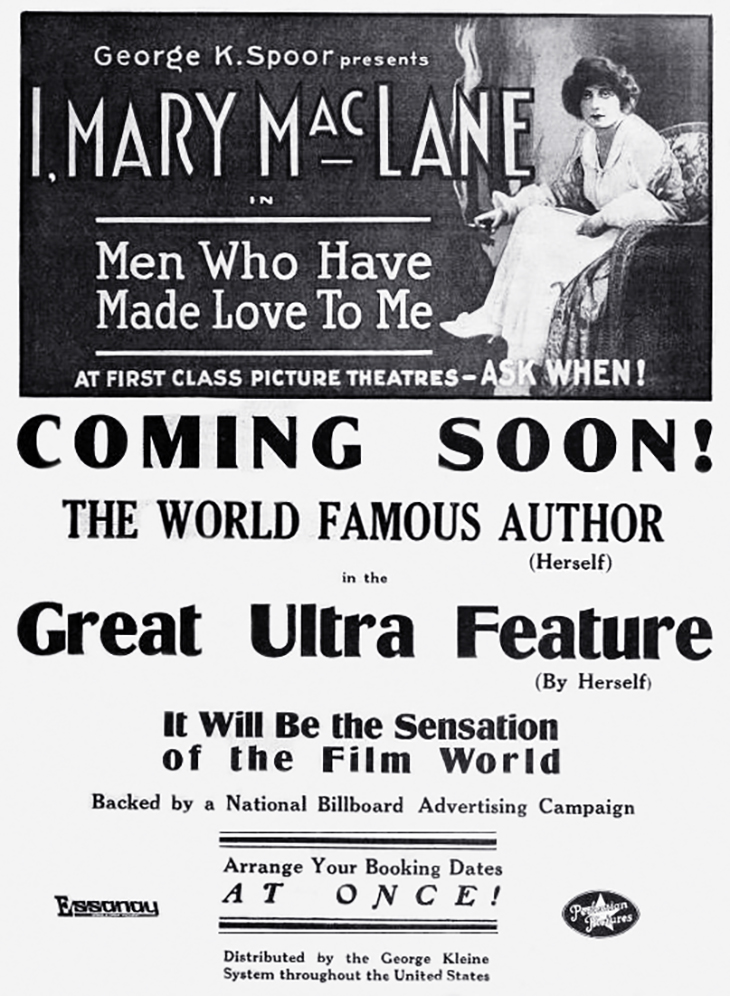 (Mary MacLane 1919 Men Whom Have Made Love To Me Ad: Moving Picture World)

At the time, “made love” was more likely to refer to flirtation than to sex.

Based on writer Mary MacLane’s 1910 article, Men Who Have Made Love to Me, the author/star recounted six different failed relationships with men, and spoke directly to the reader / audience. This technique was ground-breaking stuff for both literature and films at the time, and hopefully was appreciated by the movie fans that weren’t put off by her forbidding look in this ad.

Born on May 1, 1881 in Winnipeg, Manitoba, Canadian-American author Mary MacLane published her first, best-selling autobiography The Story of Mary MacLane (1902) when she was only nineteen. Written in diary format with a stream-of-consciousness / contemplative inner thoughts style, Edwardian-era readers found her memoir (and subsequent works) unconventional, even shocking.

MacLane wrote scathingly of growing up in Butte, Montana, the people that lived there, the institution of marriage, and her family. Her father died when she was eight, and from her 19-year-old teenager perspective, was – surprise! – profoundly lacking:

“Certainly he did not love me, for he was quite incapable of loving any one but himself….He is nothing to me. There are with me still a mother, a sister, and two brothers. They are also nothing to me…”

MacLane was superbly self-involved – in love with herself and her body – and as much aware of her flaws as any narcissist can be:

“My admirable young woman’s-body, which I enjoy thoroughly and of which I am passionately fond…You may gaze at and admire the picture in the front of this book. It is the picture of a genius – a genius with a good strong young woman’s body”. – The Story of Mary MacLane

I can only think of one other person in my lifetime (so far), who has ever professed their self-admiration as passionately and frequently as Mary MacLane.

Her interests included Napoleon, the Devil (she wrote of wanting to marry the Devil; the title of her first book was initially I Await The Devil’s Coming, until the publisher changed it), an unrequited love for a female high school teacher, and an admiration for women’s bodies in general.

MacLane took the proceeds from her best-selling autobiography and high-tailed it out of Butte. She presumably never looked back, since she was explicit in her dislike of the place and people. She spent some time in the Bohemian and literary atmosphere of Greenwich Village around 1909-1910.

It was only natural that a woman so self-absorbed and bent on becoming famous, would seize the opportunity to become an actress and portray herself in the movie based on her article, Men Who Have Made Love to Me (1910).

Mary Maclane lived with her friend Caroline M. Branson for a while, and never married. She died at the age of 48 in Chicago in 1929. Some critics have extolled her and her works as feminist, while others have mocked… 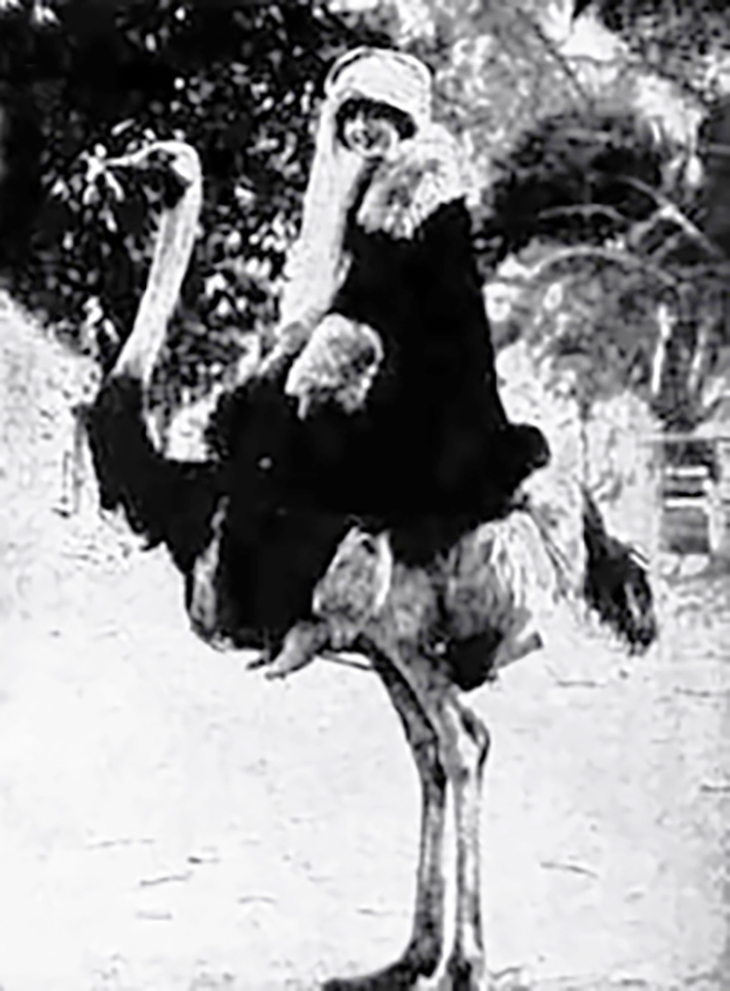 This one is true! Olive Thomas and other Hollywood starlets were also pictured with ostriches in movie fan magazines of the time. The trend with actresses riding ostriches may be attributable to Balboa Amusement Producing Company’s silent film comedienne Jackie Saunders, who took over an ostrich farm that she held the mortgage on in 1917.

Actress Mae Murray also had a pet ostrich, of which Photoplay (1917) said,

“[It] follows her all day long. So fond has she become of the bird that she is teaching it to sing like a canary with success.”

Ostrich feathers and plumes from other birds had been in high demand as adornment for women’s fashionable hats and fans since the 1870s Victorian era. By 1917, that trend was fading, and some other use had to be found for the birds.

Cawston Ostrich Farm in South Pasadena, California was the first ostrich farm to locate near Los Angeles (just 3 miles north; Hollywood didn’t even exist at the time). The farm opened to the public in 1886 with eighteen imported ostriches that had survived the 1885 journey from South Africa, a number that quickly grew.

From the late 1880s until 1935 when the farm closed down, tourists and other farm visitors to the area could ride on the ostriches, go for an ostrich carriage ride, or buy ostrich feathered hats. 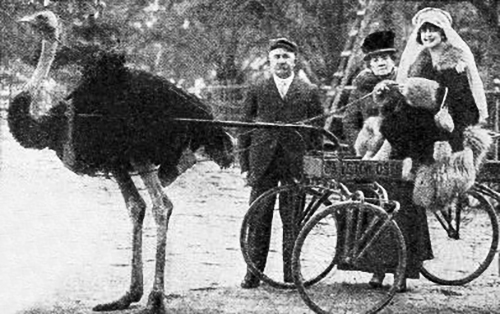 Adjacent to the ostrich farm were a pigeon farm, and an alligator farm, making it a trifecta attraction for tourists.

When David Horsley Company’s 1916 silent movie Ostrich Plumes (aka The Ostrich Tip) starring William Clifford and Margaret Gibson was filmed at the Cawston Ostrich farm, Motion Picture News reported there were more than 500 ostriches on the farm at that time.

Silent movie star and artist Dorothy Gish (Lillian’s sister) sold one of her original works of art for millions of dollars. 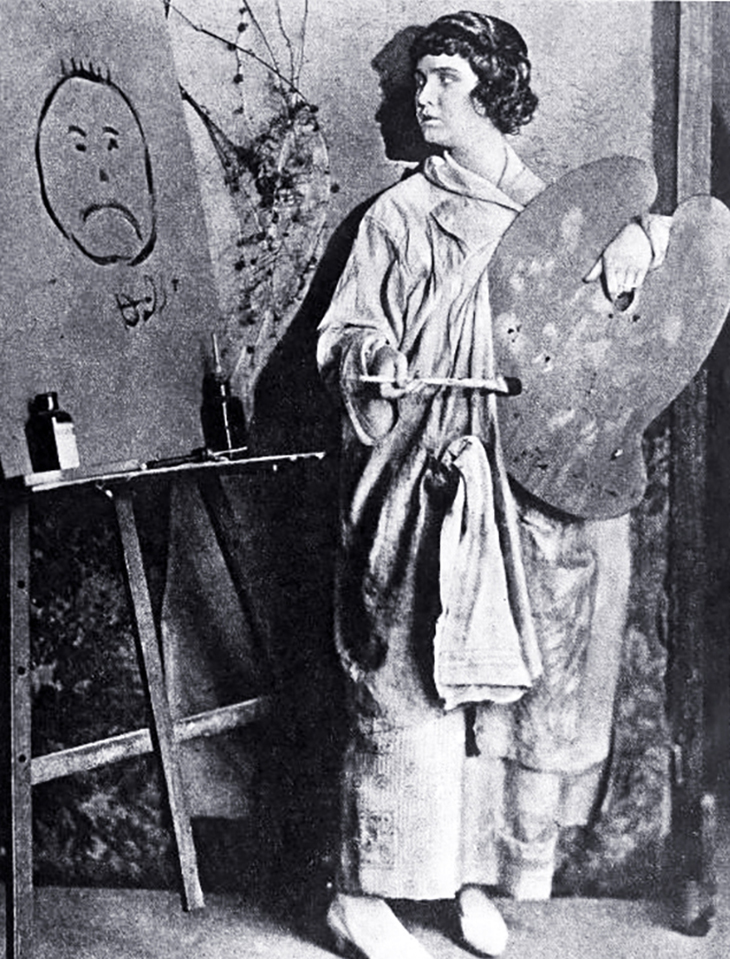 April Fool! Dorothy Gish looks well aware of her skill at painting; I have no idea whether she ever sold this great work of art or not.

Luckily she stuck with her day job, acting in movies. Dorothy Gish appeared in over 100 movies between 1912-1946, and could be seen in the occasional TV guest-starring role during the 1950s and 60s.

The Tomb of the Unknown Cartoonist

Unfortunately, many other cartoonists never achieved fame, and because their works were often unsigned or illegible, the artist has faded into the mists of time. But, their delightful work lives on, and we celebrate a few of these unknown artists and their works, below. 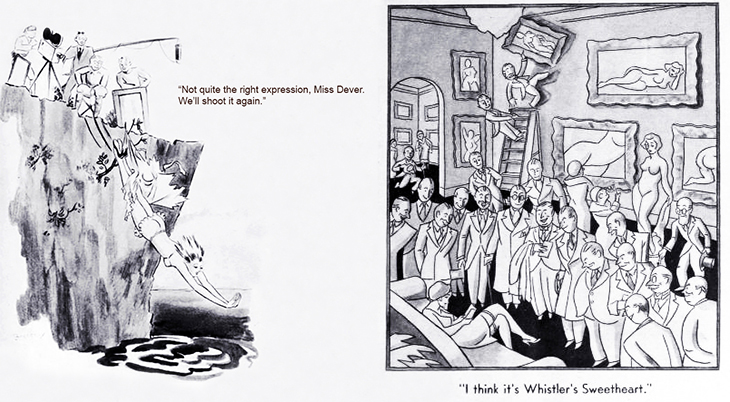 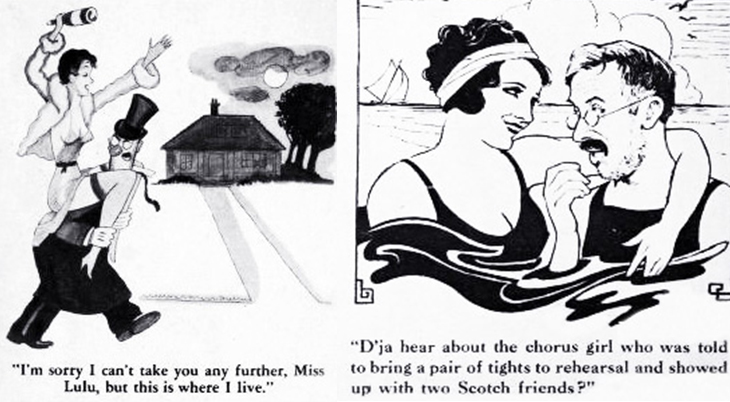 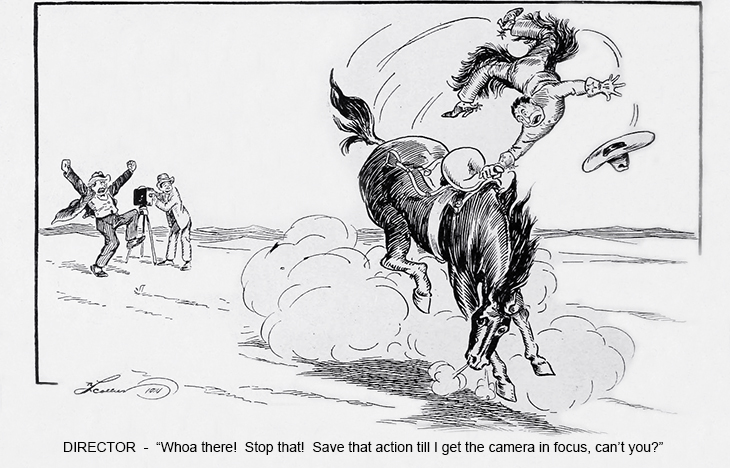