The Pigeon’s Flying Corps of WWI also employed dogs and balloons to aid in their wartime message delivery services. This grocery wagon was converted to house a squadron of up to 72 homing pigeons during WWI. 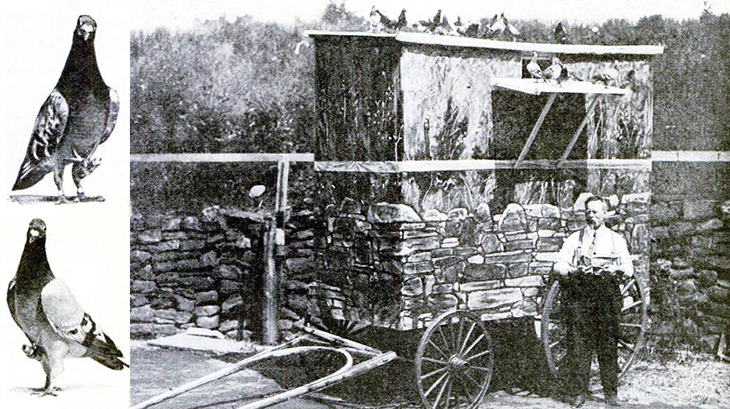 The pigeon coop was painted to blend in with the landscape so that it was almost invisible – in effect, allowing the pigeons to fly under the radar of the enemy.

Each carrier pigeon has a pencil and a message written on paper in a tiny pouch attached to their body. The pigeons are transported to their take-off destination (usually they only fly one way – back to their home).

In some cases the pigeons were (and can still be) delivered to their take-off point by balloons inflated to travel a short distance before dropping to earth; or dropped from a plane by parachutes; or even carried by dogs. 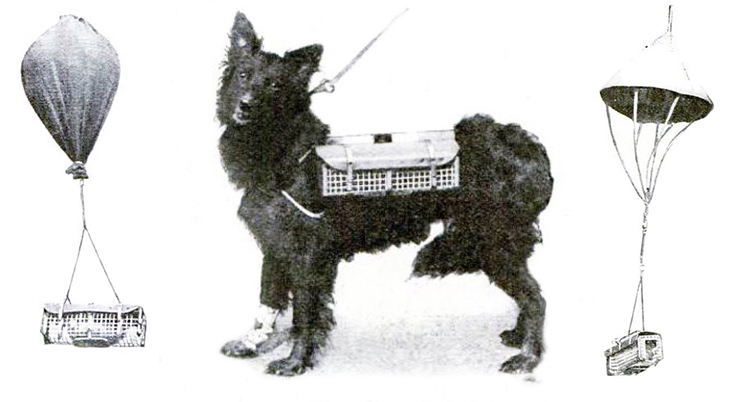 Once they – and their initial message, if any – have arrived and been retrieved at their take-off point, a new message can be attached to the homing pigeon and they fly it back to their base.

Use of homing pigeons to carry messages during peace and war, goes back over 5000 years ago, to at least 3000 B.C. in ancient Egypt.

By the middle ages, this practice had evolved into an aerial postal service in some smaller European and Asian countries. In more recent centuries, Reuters press founder Paul Julius Reuter used a fleet of carrier pigeons to deliver news between Brussels and Aachen in 1850 (eventually replaced by the telegraph).

New Zealand established the Great Barrier Pigeon-Gram Service between Auckland and Great Barrier Island in 1897, issuing the first airmail stamps for it in 1898. India’s Police Pigeon Service was only recently retired, in 2002.

Tiny “pigeon post” messengers and aerial reconnaissance pigeons are capable of flying to their home destination from up to 1,100 miles away. Worldwide, the sport of pigeon racing today is still a thing, with top-rank pigeons selling for as much as €200,000. The Canadian Racing Pigeon Union supports members and clubs across Canada.

German pharmacist Julius Neubronner is credited with designing the first mobile dovecote. He used homing pigeons to deliver medications to patients, and he pioneered the pigeon-cam, literally harnessing the idea of camera-carrying pigeons in 1907. 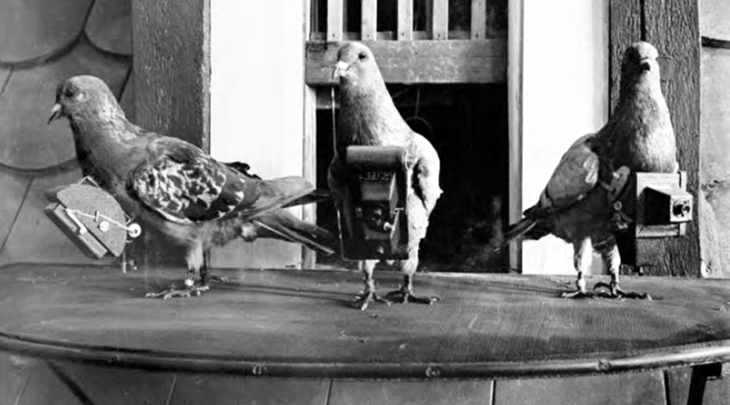 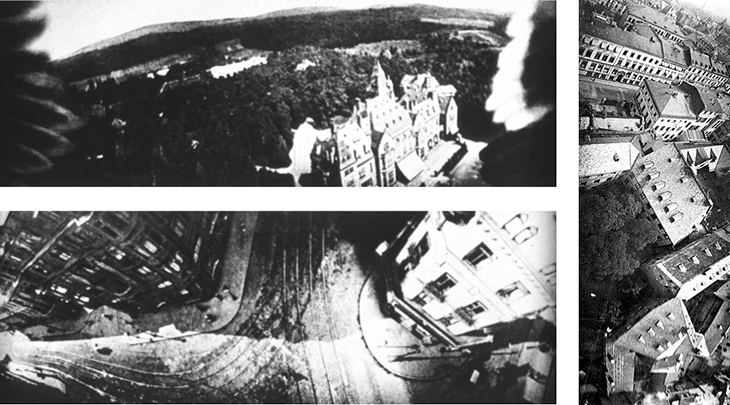 The CIA’s Office of Research and Development later created a battery-operated pigeon camera to collect detailed images; the exact timing and purpose they were used for (where/when) is still classified.

The British-based film company Atlantic Productions produced a 2005 TV documentary War of the Birds, about the Secret Service MI-14 division of homing pigeons.

The next time you’re tempted to think of the humble pigeon as a nuisance bird, remember that pigeons from around the world were recognized for their flights of heroism in World War I and World War II. 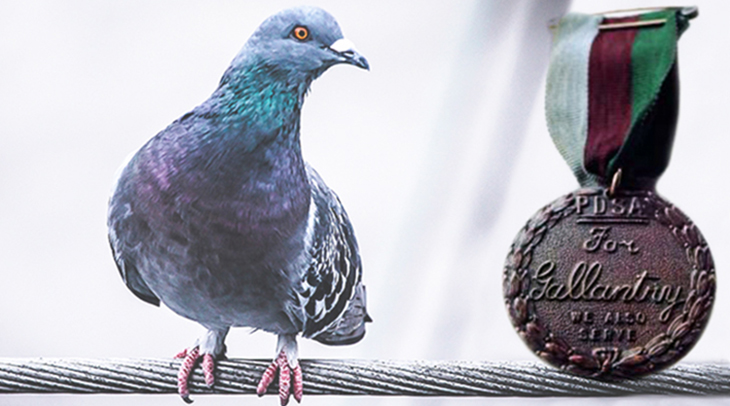 This Veterans Day / Remembrance Day, include these winged war-time heroes below – all decorated veterans of exceptional valor – in your thoughts.

The United Kingdom’s Air Ministry Pigeon Section (almost 250,000 pigeons) awarded 32 pigeons from the U.K. and allied countries, with the Dickin Medal (comparable to the Victoria Cross) for valor during World War II.

The animated movie Valiant (2005) about a group of pigeons during WWII, was inspired by a story these and other, heroic real-life service birds (and a story by George Webster). Ewan McGregor, Ricky Gervais, John Cleese, John Hurt, Jim Broadbent, Hugh Laurie, and Tim Curry are among the voice over actors in the cast of Valiant.

From the use of flying pigeons, to Zeppelins and other dirigibles, biplane bombers, WWI “flying boats” and even Howard Hughes’ mammoth Spruce Goose – innovation in flight and communications during World War I and WWII was an important priority for military forces on all sides.

If you like birds and birdwatching, you may enjoy these articles:

Confessions of a Bird Watcher

*Images are believed to be in the public domain or Creative Commons licensed & sourced via Wikimedia Commons, unless otherwise noted*