American octogenarian senior citizen and actress Marion Ross (nee Marian Ross) was born on October 25, 1928 in Watertown, Minnesota. She told the Chaska Herald that her family moved when she was 3 years old to the town of Albert Lea, Minnesota. 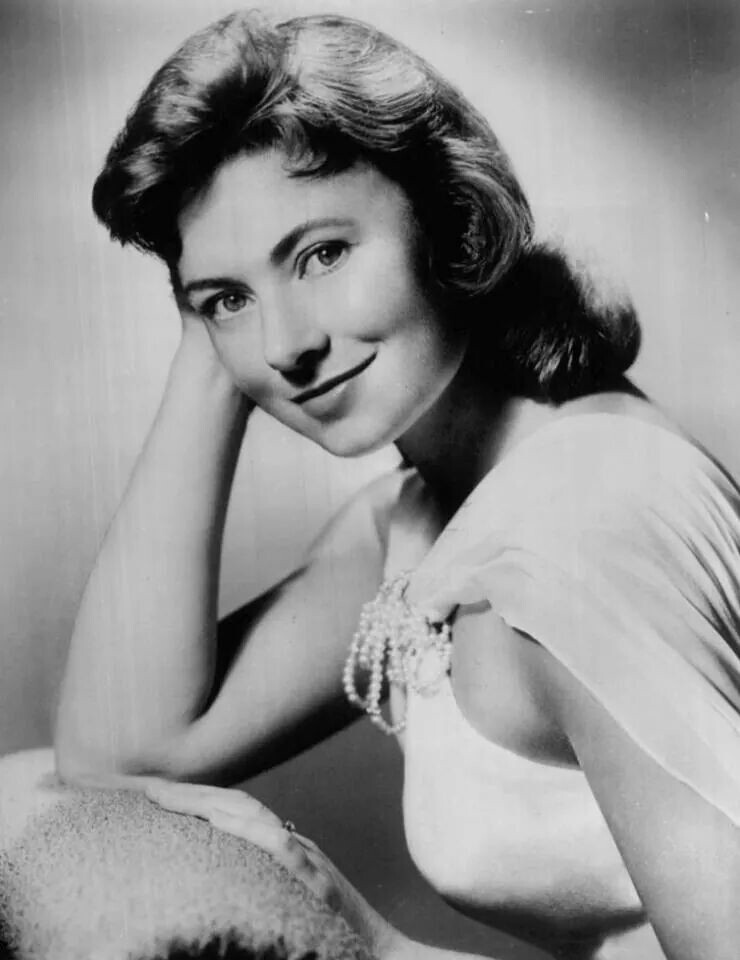 As a young teenager, she moved by herself to Minneapolis, Minnesota and transferred high schools so she could work while studying drama at the MacPhail Centre for the Arts.

After her family moved to San Diego California when she was 15, Ross completed high school in San Diego and entered San Diego State College (became San Diego State University in 1960) where she was named Most Outstanding Actress.

She met and married fellow theatre actor Freeman Meskimen in 1951. The couple moved to Los Angeles and Marion landed a contract with Paramount Pictures.

In addition to her many uncredited feature film roles, Marion Ross had some larger, credited roles in these movies:

Marion Ross had acquired a list of episodic television credits by the end of the 1950’s as well, beginning with an episode of Cavalcade of America in 1953 that Fay Wray in the cast. Other television highlights for Ross were a recurring role as Nora in Life With Father (1953-1955), and an appearance on Matinee Theatre in 1957 with co-stars Roger Moore and Patrick Macnee.

By the late 1950’s, Marion Ross was finding more work in television. In 1958 she worked twice with actor Darren McGavin, appearing in his TV series Mike Hammer, and in an episode of Studio One in Hollywood that also included Jackie Cooper. The following year, she guest-starred on an episode of a baby boomer favourite TV series, Perry Mason; on M Squad starring Lee Marvin; The Untouchables; and on The Donna Reed Show with Shelley Fabares. Lee Marvin and Marion Ross also appeared in the same episode of Alcoa Premiere in the 1960’s, with Fred Astaire and James Gregory (Barney Miller).

In the box-office hit Operation Petticoat (1959), Marion Ross played Second Lieutenant Colfax. She was in good company in Operation Petticoat with the film’s stars Cary Grant, Tony Curtis, Dina Merrill, and Dick Sargent (Bewitched). Operation Petticoat was a reunion for Ross and actor Gavin MacLeod (The Love Boat); they had worked together for the first time the previous year in an episode of The Walter Winchell File, and a lifelong friendship began.

As the 1950’s ended, Marion Ross and husband Freeman Meskiman had their first child, son Jim Meskiman, in September 1959. Ross told People that Meskiman retired from acting to work as a savings and loan company officer and support their young family.

During the 1960’s, Marion Ross’s feature film work dwindled to almost nil, although she did have small role in the true-crime film Blueprint for Robbery (1961) starring J. Pat O’Malley, which is a dramatization of the Great Brinks Robbery.

She was kept busy off-screen when she had daughter Ellen Meskiman (b. approx 1963) and spent time raising her young family. Ross also found more work on television, appearing in TV movies and episodes of some popular baby boomer series, oft-times in productions with some of the biggest names in Hollywood and the golden era of TV. Marion Ross worked with such luminaries:

Marion Ross had a recurring role as Susan Green on The Gertrude Berg Show (1961-1962), and co-starred as Mary Morgan on the short-lived daytime soap opera Paradise Bay (Sept 1965-July 1966).

Marion Ross’ marriage to Freeman Meskiman ended in divorce in 1969 after 18 years of marriage. She told Closer Weekly about the financial and mental struggles that ensued.

Ten years after her divorce, she began seeing a psychotherapist.

“I’d thought I would get over it quickly, get everything straight in my head. So I went to see a shrink, and I do recommend it for anyone.”

In her second movie with Dana Wynter, Ross had an uncredited role as a passenger in the star-studded feature Airport (1970). In addition to Dana Wynter and Marion Ross, the cast of Airport included Burt Lancaster, Dean Martin, George Kennedy, Jacqueline Bisset, Helen Hayes (The Snoop Sisters), Van Heflin, Maureen Stapleton, Lloyd Nolan, Gary Collins, and Barbara Hale. Ross had worked with Barbara Hale before when she appeared on an episode of Perry Mason in 1959, and with Dean Martin in the 1958 movie Some Came Running. The following year, Marion Ross reunited with Airport co-star George Kennedy on his series Sarge.

In the early 1970’s, Marion Ross could be seen in the TV movie The Weekend Nun (1972). The cast of The Weekend Nun included actors Joanna Pettet, Ann Sothern, James Gregory, Beverly Garland, and Kay Lenz. Ross could also be seen by sharp-eyed seniors and baby boomers in episodes of popular baby boomer TV series such as Emergency!:

Marion Ross debuted the character of Marion Cunningham in an episode of Love, American Style in 1972, in a segment called Love and Happy Days. Her co-stars in included Jackie Coogan as Uncle Harold, Harold Gould as Marion’s husband Howard Cunningham, Ron Howard as her son Richie Cunningham, and Anson Williams as Richie’s friend Potsie. Ross had first worked with actor and future director Ron Howard when she appeared in a episode of The Eleventh Hour.

Below from left, the Cunningham family cast on Happy Days in 1974 when the series debuted: Marion Ross, Tom Bosley, Erin Moran, and Ron Howard. 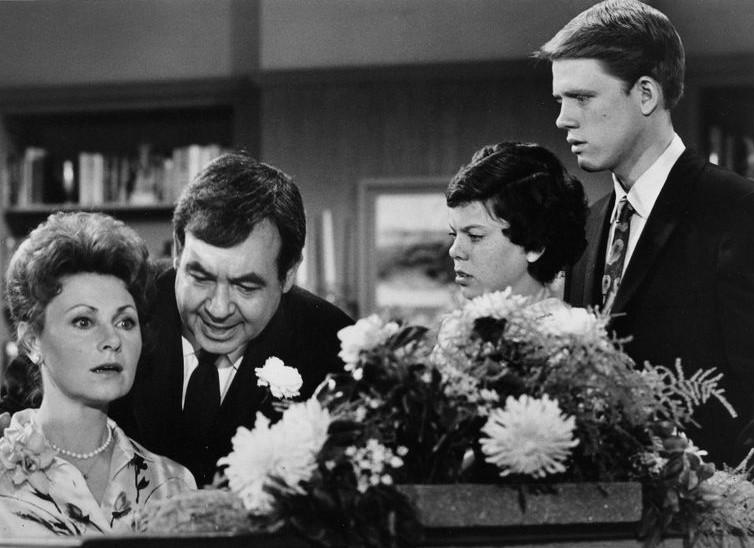 When the long-running Happy Days TV show premiered in 1974, Marion Ross reprised her character of Marion Cunningham. Several of her co-stars from the previous Love, American Style episode joined her on the Happy Days – Ron Howard as Richie Cunningham, and Anson Williams as Potsie. Actor Tom Bosley replaced Harold Gould as Howard Cunningham, and new characters were introduced that included Henry Winkler as “The Fonz“, Erin Moran as Joanie Cunningham, Don Most as Richie’s friend Ralph “Malph”, and teen heartthrob Scott Baio as Chachi Arcola.