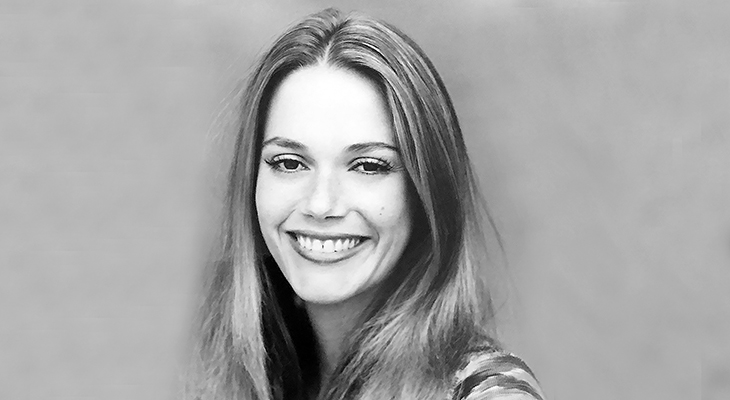 Lipton has said she was sexually abused by an uncle around age 7 and became a shy, nervous child with a pronounced stutter. She overcame this and began taking acting lessons and modeling in New York City, becoming a successful Ford Agency model at the age of 15. 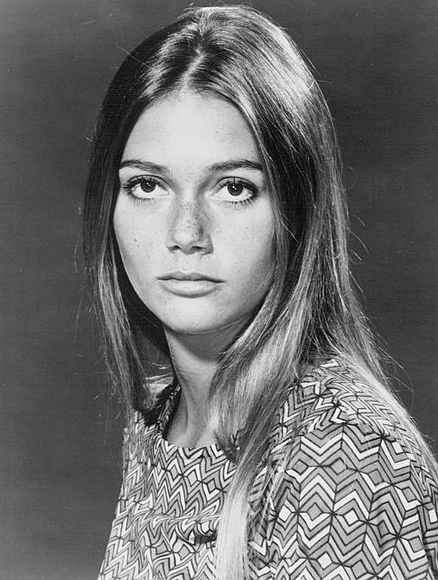 After the Lipton family moved to Los Angeles in 1964 when she was 18, Peggy Lipton embraced the 60’s hippie culture with recreational sex and drug use, and and signed a contract with Universal Pictures.

Peggy Lipton’s television debut came at the age of 19 on an episode of The John Forsythe Show (1965). That same year, she appeared in episodes of popular baby boomer TV series such as Bewitched and The Alfred Hitchcock Hour. Her older brother Robert Lipton appeared in the same episode of Mr. Novak that she did in 1965.

Off-screen, Lipton had affairs that were slated to go nowhere.

She slept with Paul McCartney a few times when he visited the U.S. beginning in 1965 at the height of Beatles fame, and while he was living with girlfriend Jane Asher’s family in England. For almost a year she lived with an unfaithful alcoholic named Rick who hit her.

During the rest of the 1960’s, Peggy Lipton continued to find occasional episodic television work, popping up on The Virginian (1966), The F.B.I. (1967), a two-part episode of Walt Disney’s Wonderful World of Color (1967) titled Willie and the Yank, which starred Kurt Russell as Private Willie Prentiss, and The Invaders (1967) starring Roy Thinnes, in an episode guest-starring Ed Asner.

Lipton explored a singing career and had Top 200 hits between 1968-1970. Around the time she recorded her album, she lived with music producer Lou Adler for a time. Lipton’s 1968 album Peggy Lipton included her #121 chart single, Stoney End. Below, Peggy Lipton is introduced by Sammy Davis Jr. and sings on The Hollywood Palace in 1969.

In her autobiography Breathing Out (2005) written with David and Coco Dalton, Lipton recalls smoking pot and having a crush on Terence Stamp while filming Blue. Lipton would have an affair with both Terence Stamp and his brother Christopher Stamp, as well as Elvis Presley (although she said he was mostly impotent by then), Keith Moon, and Ryan O’Neal, among others, during her teens and early 20’s. 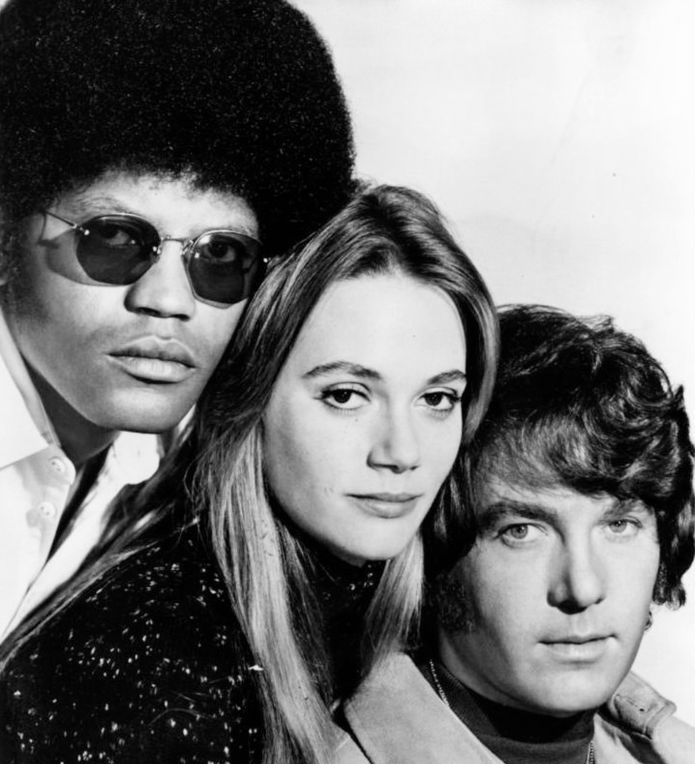 Most baby boomers will remember Peggy Lipton best for her co-starring role as Julie Barnes on Mod Squad (1968-1973), the hippest cop show of the 1960’s-70’s. Lipton and her co-stars Michael Cole and Clarence Williams III appeared in all 123 episodes of Mod Squad during the 5 years the series was on the air.

Below, Peggy and a guest star in a clip from a Mod Squad episode – note the vintage car, vintage fashions, and vintage “car phone”!

Peggy Lipton told People that she first met producer Quincy Jones on a friend’s sailboat in the Bahamas in 1969 and thought he was “adorable”, but Jones was married to his second wife Ulla Andersson at the time.

In 1971, Lipton’s friend Jolie (who happened to be Jones’ oldest daughter) invited newly separated/single Quincy and Peggy to dinner; they were soon living together. After an abortion in 1972, Lipton gave birth to their daughter Kidada Jones in March 1974. The couple married in 1974 a few months after Quincy’s brain aneurism and subsequent surgeries in August of that year. Their second daughter Rashida Jones was born in February 1976, and Lipton’s acting career was put on hold. 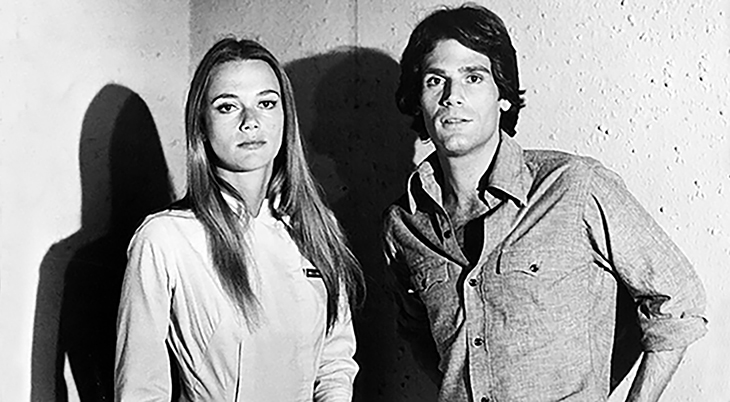 An exception to this was The Return of Mod Squad (1979) TV movie reunited the original Mod Squad cast of Lipton, Michael Cole and Clarence Williams III, 6 years later. Actor Roy Thinnes also appeared in the movie, in another reunion for Peggy Lipton (she had appeared in his series The Invaders in 1967).

During her marriage to Quincy Jones, who was often away at work, stay at home mom Peggy Lipton had an affair with a woman, suffered panic attacks, and had a breakdown in 1984. She left Jones in 1986 and their divorce was finalized in 1990 after 17 years of marriage (20 years together).

A period of self-exploration, travel, and more mental health crisis, was followed by counselling. Although Peggy Lipton has been linked with other men since her divorce from Quincy Jones, she has never remarried, and they remain friends today.

Meanwhile, after a 9 year absence from the screen, Peggy Lipton returned to the movies and TV in 1988 with a vengeance, appearing in 4 releases that year. The comedy TV movie Addicted to His Love (1988) starred Barry Bostwick as a con artist, featured Hector Elizondo as a police detective, with a host of young actresses including Erin Gray, Colleen Camp, Linda Purl, Dee Wallace, and Peggy Lipton as the Assistant D.A. In the sci-fi comedy Purple People Eater (1988), Peggy Lipton co-starred with Ned Beatty and Neil Patrick Harris; singers Chubby Checker and Little Richard also appeared.

In her early 50+ years, Peggy Lipton had a starring role in the TV thriller Justice for Annie: A Moment of Truth Movie (1996) with Bruce Weitz. She had a smaller role in the big-screen adventure drama The Postman (1997) starring Kevin Costner, Will Patton, James Russo, and rocker Tom Petty.

During the 2000’s, Peggy Lipton could be seen in the romantic comedy-drama Skipped Parts (2000) starring Drew Barrymore, and Jennifer Jason Leigh; and in the musical comedy-drama Jackpot (2001) starring Jon Gries, Daryl Hannah, Adam Baldwin, country singer Mac Davis, and Crystal Bernard, whom Lipton had worked with when she guest-starred on Wings in 1994.

Peggy Lipton had recurring roles on the prime-time series

In 2004 while she was working on her autobiography Breathing Out, Lipton was diagnosed with colon cancer and underwent chemotherapy.

She had begun dating Jack Chartier, chief of staff for the New York state comptroller in 2003. Chartier was a man in love, some have said obsessed with, Peggy Lipton, and he diverted state pension funds to help her with rent, hospital bills, and later a business venture.

That same year, Peggy Lipton could be seen on television in an episode of Psych (2014) and in another Twin Peaks prequel feature film, Twin Peaks: The Missing Pieces (2014). In addition to Lipton returning as her Norma Jennings character, many of the actors and characters from the original Twin Peaks series and previous prequel movie Twin Peaks: Fire Walk with Me also returned, including Michael Ontkean and Joan Chen.

Peggy Lipton fans could see her in the family comedy A Dog’s Purpose (2017) co-starring Dennis Quaid.

She was back on television screens in 2017 as Norma Jennings again, in the premiere episode of the new Twin Peaks TV series. Lipton’s co-stars from the previous series and movies that were regulars again on the new Twin Peaks included Mädchen Amick, Kyle MacLachlan, Dana Ashbrook, Sheryl Lee, Russ Tamblyn, Ray Wise, and Grace Zabriskie.

In 2018, a septuagenarian Peggy Lipton told interviewer Sheila Weller for a NextTribe article, that she has continued her long-time practice of meditating. She believes that staying vital should involve being around young people, learning new skills (CPR) and taking on new challenges. Some of her sources of strength are other women who have beat ageism and are a source of inspiration for her, including Meryl Streep, Gloria Steinem, Michelle Obama, and close friend Jane Fonda:

“I’ve known her for 45 years but we’ve become friends now and I look up to the energy” of this woman who, at age 80, looks fabulous, is the star of a hit TV series, and has taken part in every major change in American culture for 50 years. “

Baby boomer fans would tell Peggy Lipton that she was a major influencer herself during those cultural shifts – from dating Beatle Paul McCartney during the peak of the British Invasion, to starring on the hip series Mod Squad, being an early “pioneer” of biracial marriages with Quincy Jones, and taking part in the stylish Twin Peaks television phenomenon.

Note: This article was first published in 2016 with the title Celebrating Seniors – Peggy Lipton Turns 70. It has been updated with new / additional content.

I loved, loved, loved Mod Squad and I was heart broken when it was canceled. Peggy Lipton played such a strong, positive roll model for both young and older women alike. I’m now 65 and just found out, I can buy the complete series on Amazon. Guess what I’m asking Santa for Christmas? You’re right, Mod Squad! A huge thank you to Peggy Lipton, Clarence Williams lll and Michale Cole for being there for me through my crazy and very difficult teenage years, Mod Squad was truly important to me.

I always love you as Julie Barns. And Still do love ya

Bravo Peggy Lipton on a life well lived!! You are an inspiration to women everywhere and every age. I have been a fan for almost 50 years. When my three tween grandchildren come for a weekend visit, we watch Mod Squad. They love it!! Just wanted to let you know; Thank-you for the book, CD, television and movie work. But especially, thank you for your twitter feed. Although I am not on twitter, I do read your tweets and retweets. I believe you are a genuinely compassionate person who is still fighting to right wrongs (with a sense of humor). That is so needed in this country today under this administration. Thanks again for your numerous contributions to the world and Happy Birthday on the 30th!!!

I was always a big fan. I waited on Quincy Jones mother at the fifth avenue record shop in Seattle. She would complain about Peggy but I never really listened. How did we get so old?

You were such fun in Lawrence High. I remember double-dating and staying up late talking about EVERYTHING! I'm in Miami Beach. I reconnected with Lenore Shaw. Remember her? She's in NYC.

Peggy,I could not believe you played Hannah in A Dogs Purpose! What a great surprise! How wonderful they paired you with a younger man...normally opposite in Hollywood. You are ageless and timeless! I love Rashida too,especially last Blackish episode!!!

Happy Spring Julie! Hope you're given roles you can blossom in.