A1. What was the name of the hour-long television show that Edward Asner starred in after The Mary Tyler Moore Show went off the air on March 19, 1977?

A2. Which of the original cast members of The Mary Tyler Moore Show also starred in the 1980 movie Caddyshack? 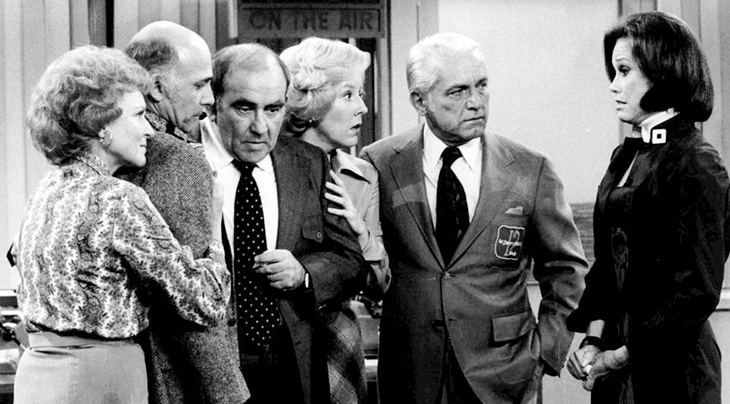 Series star Mary Tyler Moore was already known to TV sitcom-lovers from her Emmy Award-winning work on The Dick Van Dyke Show (1961-1966); she won 3 more Emmy Awards for work on The Mary Tyler Moore Show, and another for for starring the in TV movie Stolen Babies (1993). She later starred in several short-lived television series in the next decades after The Mary Tyler Moore Show went off the air. She won a Tony Award in 1980, and was nominated for an Academy Award Best Actress for playing an emotionally frigid mother to a grieving son (Timothy Hutton) and husband (Donald Sutherland) in Robert Redford’s directorial debut Ordinary People (1980). Mary Tyler Moore had diabetes, heart issues and kidney problems for years prior to her January 2017 death from pneumonia complications at the age of 80.

Ted Knight went on to star as Henry Rush in the sitcom Too Close for Comfort from 1980-1987. He died of colon cancer complications in 1986.

Valerie Harper starred in Rhoda for 4 years, from 1974-1978. Harper had received 3 Primetime Emmy Awards for Outstanding Supporting Actress in a Comedy Series during her run on , and received another Emmy for Rhoda – Outstanding Lead Actress in a Comedy Series. After Rhoda came Valerie (1986-1987), and other television roles. Harper also continued to perform on stage in her senior years, even competing on Dancing With the Stars in 2013 in her 70s. Valerie Harper died in August 2019 at the age of 80 from brain cancer.

Georgia Engel, who played Ted’s on-screen love Georgette, had a thriving career in films and as a semi-regular / star on several television series over the next 35+ years (Goodtime Girls, Coach, Everybody Loves Raymond, Passions, Hot in Cleveland). Engel received several Emmy Award nominations – 2 for her work on The Mary Tyler Moore Show, and another 3 for her Everybody Loves Raymond performances as Pat MacDougal. Georgia Engel passed away in April 2019 at the age of 70 from unknown causes (she was a Christian Science follower and did not consult doctors).

Four of the regular cast members of The Mary Tyler Moore Show died in 2021:

Gavin MacLeod starred in another long-running series, The Love Boat (1977-1987), as Captain Merrill Stubing. He worked on stage, television, and films after that. Gavin MacLeod turned 90 on his  February 28th birthday in 2021; he died in May 2021.

Edward Asner was a star of TV and movies for years before and after The Mary Tyler Moore Show, often playing Santa onscreen in Christmas movies. He voiced the lovable old man in the animated feature film UP (2009), and his list of film and TV credits approached the 400 mark. Over his career, Asner amassed 7 Primetime Emmy Awards – 3 for playing Lou Grant on The MTM Show, and another 2 for starring in the spin-off drama Lou Grant; 1 for his work as grim Axel Jordache on Rich Man, Poor Man (1976); and another for his portrayal of slaver Captain Thomas Davies on Roots (1977). In 2020 he was involved in no less than 15 TV or movie projects, and Asner toured on stage as recently as 2019, when he turned 90 on his November 15th birthday. Ed Asner died on August 29, 2021 at the age of 91.

Betty White made a career out of being a funny, racy “older” woman and was an AARP commercial regular. She starred on the Hot in Cleveland (2010-2015) television comedy and on a 2013 episode was joined by friends Cloris Leachman, Valerie Harper, Mary Tyler Moore, and Georgia Engel for an MTM reunion of sorts. No slouch when it came to Emmy Awards herself, Betty won 5 of them, among which were 2 from The MTM Show and another from her performance as Rose Nylund on The Golden Girls (1985-1992) Lovely Betty White celebrated her 99th birthday on January 17, 2021; she passed away on New Year’s Eve, 2021.