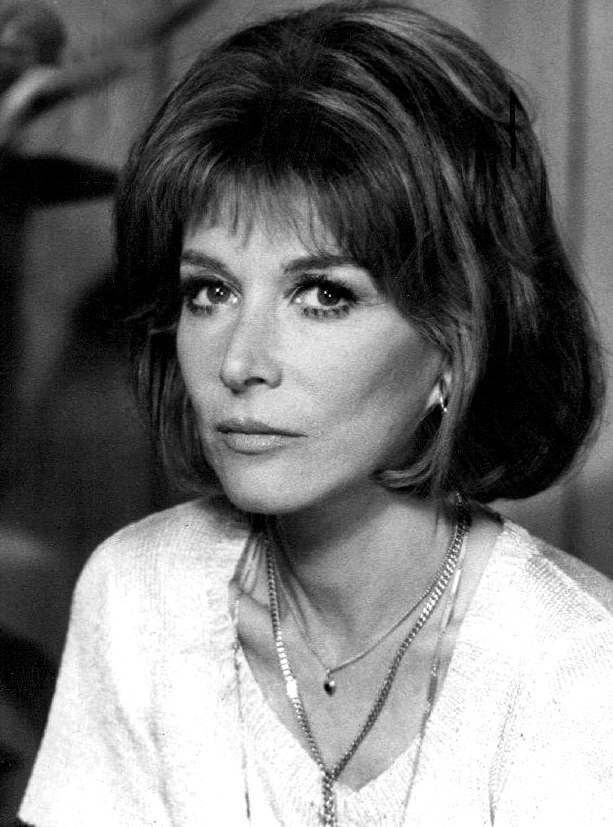 As Lee Grant entered her 50+ years in 1975, she starred in her own comedy series Fay (1975-1976), as 40ish divorcee Fay Stewart, happily single, independent, and getting back into dating.

Audra Lindley of Three’s Company appeared in Fay with Grant.

Although Lee Grant was nominated for an Emmy for Outstanding Lead Actress in a Comedy Series for her performance in Fay, the series was cancelled after 10 episodes.

Below, and older Lee Grant talks about her television sitcom Fay during an interview

The romantic comedy Shampoo (1975) was co-written by and starred Warren Beatty as amorous hairdresser George. Lee Grant co-starred as housewife Felicia Karpf, who is having an affair with George, married to Lester Karpf (Jack Warden), and mother to Lorna Karpf (Carrie Fisher). Beatty’s character has a complicated romantic past and present with most of the women in Shampoo, including Julie Christie and Goldie Hawn. Other co-stars in Shampoo included Howard Hesseman (WKRP in Cincinnati), and bit players Andrew Stevens (Dallas), Susan Blakely & Michelle Phillips (Knots Landing). Lee Grant won the Academy Award for Best Supporting Actress for her performance in Shampoo (her third nomination, after 1952’s Detective Story and 1971’s The Landlord).

Years later, in Grant’s autobiography I Said Yes to Everything (2014), she recalls 1970’s Hollywood elite including herself and husband Joey (Joseph) Feury) doing cocaine in the bathrooms, and weed in the living rooms – reminiscent of the themes in Shampoo.

Madeline Kahn and Joel Grey present Lee Grant with her Oscar at the 1976 Academy Awards ceremony, below.

Lee Grant continued to find directing work in the latter half of the 1970’s. She directed a stage play as well as the short Stronger (1976) starring her daughter Dinah Manoff, and the TV comedy movie For the Use of the Hall (1975) starring Susan Anspach, Barbara Barrie, and David Hedison.

In the last of the 1970’s and the early 1980’s, Lee Grant’s movies included several thrillers, disaster flicks, and horror films. Her baby boomer and senior fans could see her in movies and co-stars that included:

In the made-for-TV drama Perilous Voyage (1976), their supporting cast included Michael Parks, Louise Sorel (Days of Our Lives), Michael Tolan (The Doctors and the Nurses), and Stuart Margolin (The Rockford Files). Grant and Louise Sorel had both appeared in Plaza Suite (1971), and Grant and Shatner had worked together previously in an episode of For The People in 1965 co-starring Jessica Walter.

William Shatner and Lee Grant paired up again in the thriller Visiting Hours (1982), which also starred Michael Ironside and Linda Purl. In Visiting Hours, Lee Grant plays Deborah Ballin, a feminist activist journalist who is targeted by psychopathic serial killer Colt Hawker (Michael Ironside). Linda Purl is a nurse at the hospital where Deborah is sent after being attacked by Hawker the first time, and William Shatner played Grant’s boss Gary Baylor. 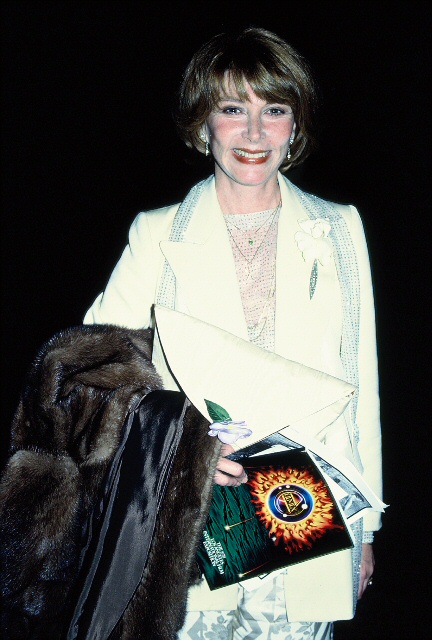 Backstairs at the White House reunited Lee Grant with Louis Gossett Jr., her co-star in The Landlord (1970); Julie Harris, who had appeared in 1976’s Voyage of the Damned with her; and Grant’s old friends from the late 1940’s and early 1950’s, former blacklisted actor John Randolph, and Cloris Leachman.

Lee Grant had also worked with Backstairs at the White House co-star Leslie Nielsen before, on TV in Peyton Place and the sci-fi movie Night Slaves (1970) with James Franciscus; and in the feature film There Was a Crooked Man… (1970) (which John Randolph and Kirk Douglas had also appeared in).

Joseph (Joey) Feury and Lee Grant relocated from Malibu to New York City in the 1980s.

Lee Grant and Joseph Feury collaborated on several HBO documentaries, most notably Down and Out in America (1986) which won the Academy Award for Best Documentary.

During the 1980’s, baby boomer audiences could see Lee Grant in a few feature films, such as Teachers (1984). Teachers is a dark comedy-drama starring Nick Nolte as a teacher, JoBeth Williams as a lawyer, Judd Hirsch as a vice principal, Lee Grant as a school superintendant, Richard Mulligan as a wandering mental outpatient mistaken for a substitute teacher, and students Ralph Macchio, Laura Dern, and Crispin Glover. Also in the cast of Teachers are Morgan Freeman and Steven Hill (Mission Impossible).

Lee Grant’s television appearances during the 1980’s were more frequent than her feature films. Baby boomers may remember seeing Grant in made-for-TV movies like For Ladies Only (1981), a drama starring Gregory Harrison (Trapper John, M.D.), Marc Singer, Viveca Lindfors, Dinah Manoff Louise Lasser (Mary Hartman, Mary Hartman). Although Grant’s daughter Dinah Manoff was in For Ladies Only, Manoff and her mother didn’t have any scenes together (although their characters slept with the same man).

In an episode of popular baby boomer series One Day at a Time, Lee Grant appeared with regular and guest stars Valerie Bertinelli and Nanette Fabray.

As the 1980’s came to an end, Lee Grant appeared in the dramatic TV movie The Hijacking of the Achille Lauro (1989) with co-stars Karl Malden (The Streets of San Francisco), Christina Pickles, E. G. Marshall, and Vera Miles. Once again Grant was united with former co-stars in The Hijacking of the Achille Lauro. Over 30 years earlier, Lee Grant had worked with E.G. Marshall and Patrick Macnee in an episode of Playwrights ’56 (1956); and actress Vera Miles was among her co-stars in an episode of ABC Stage 67 in 1966, 20+ years earlier.

The comedy-drama Staying Together (1989) was directed by Lee Grant and co-produced by husband Joseph Feury. Grant directed a Staying Together cast that included Sean Astin, Stockard Channing, Melinda Dillon, Levon Helm, Dermot Mulroney, and Daphne Zuniga, with Grant’s daughter Dinah Manoff appearing briefly. Although Staying Together got good reviews, it flopped at the box office and was the last feature film directed by Grant.

Lee Grant became a senior citizen in 1990 and continued to act in and direct projects that interested her. Grant and husband Joseph Feury had a home on New York City’s Upper West Side, her daughter Dinah Manoff was living in California, and their adopted daughter Belinda was attending college in Florida.

Albert Brooks and Lee Grant are featured in this clip from Defending Your Life.

In the TV crime drama She Said No (1990), Lee Grant’s co-stars included Veronica Hamel, Ray Baker, and Judd Hirsh, who had appeared in Teachers 16 years earlier with Grant.

Lee Grant directed 3 made-for-TV movies in a row in 1994: Seasons of the Heart starring Carol Burnett and George Segal; Reunion starring Marlo Thomas (whom Grant had first directed in 1986’s Nobody’s Child), Peter Strauss, and Lee Lee Sobieskie; and Following Her Heart with Ann-Margret, George Segal, and Brenda Vaccaro (one of Lee Grant’s co-stars in Airport ’77). When she was finished work on Following Her Heart, Grant took some time off in L.A. and passed out one night. She was taken to the hospital and diagnosed with atrial fibrillation; a pacemaker was put in. In 2014 when Lee Grant was writing her autobiography, she mentioned she was by then on either her third or fourth pacemaker to control her atrial fibrillation.

After becoming a septuagenarian senior citizen in 1995, Lee Grant appeared in another AID’s drama, the feature film It’s My Party (1996) starring Eric Roberts as gay architect Nick Stark, who has been given a few months to live and throws a party for family and friends. Gregory Harrison (Lee Grant’s co-star from 1981’s For Ladies Only) is Brandon, Stark’s estranged lover who comes to the party uninvited. Lee Grant plays Amelia Stark, George Segal (whom Grant had directed in 2 movies in 1994) is Paul Stark, Marlee Matlin is Daphne Stark. Other cast members in It’s My Party included Margaret Cho, Bruce Davison, Roddy McDowall (a co-star from 1981’s The Million Dollar Face), Olivia Newton-John, Bronson Pinchot, Christopher Atkins, Dennis Christopher, and Ron Glass. Sally Kellerman, Nina Foch, and Greg Louganis rounded out the cast of It’s My Party.

The Amati Girls (2000) is a drama starring Lee Grant’s real-life friend Cloris Leachman (and former co-star in Backstairs at the Whitehouse in 1979) as mother Dolly Amati. Playing sisters are actresses Mercedes Ruehl, Grant’s daughter Dinah Manoff, and Sean Young, with Lee Grant as Aunt Splendora. Also in The Amati Girls are Gary Hershberger, Mark Harmon, Jamey Sheridan, and Paul Sorvino. Cloris Leachman and Grant had first met 50 years earlier when they co-starred in the play Lo and Behold in New York.

From 1999-2004 Lee Grant directed 45 episodes of biographical interview documentaries for Lifetime’s Intimate Portrait series, which included the American Masters episode Sidney Poitier: One Bright Light (2000). Grant also provided narration for Sidney Poitier: One Bright Light; she had co-starred with Poitier 33 years earlier in the movie In the Heat of the Night (1967).

In her octogenarian senior citizen years beginning in 2005 Lee Grant directed her last documentary, ... A Father… A Son… Once Upon a Time in Hollywood (2005), about father-son actors Kirk Douglas and Michael Douglas. Grant had co-starred with Kirk Douglas in her first feature film Detective Story (1951), 54 years earlier.

In 2013, after almost 40 years away from the stage, Lee Grant returned to in a play directed by her daughter Dinah Manoff, The Gin Game.

As of November 2015, nonagenarian senior citizen Lee Grant is a grandmother several times over. She and her husband Joseph Feury (Joey Fioretti when they met 53 years ago in 1963), live in New York with Joe’s sister Phyllis. Grant’s daughters Dinah and husband live not too far away in Washington, and Belinda and her family live in New Jersey.

In her memoir I Said Yes to Everything (2014), Lee Grant had this to say about her life now as a “senior” senior:

“In these last two years, Joey, now seventy-four, wakes up and takes my hand. He doesn’t want to lose me. I worry about his hip. ” 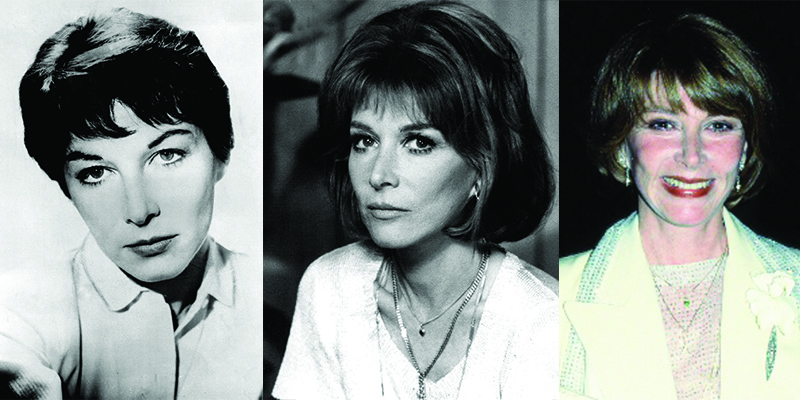 During her 7 decade career in film, Lee Grant acquired more than 100 film acting credits and 25 directing credits. She was nominated for 7 Emmy Awards and won 3 – two for Peyton Place in the 1960’s and a TV movie in the 1970’s. Grant was nominated 4 times for an Academy Award, and won for Shampoo (1976).