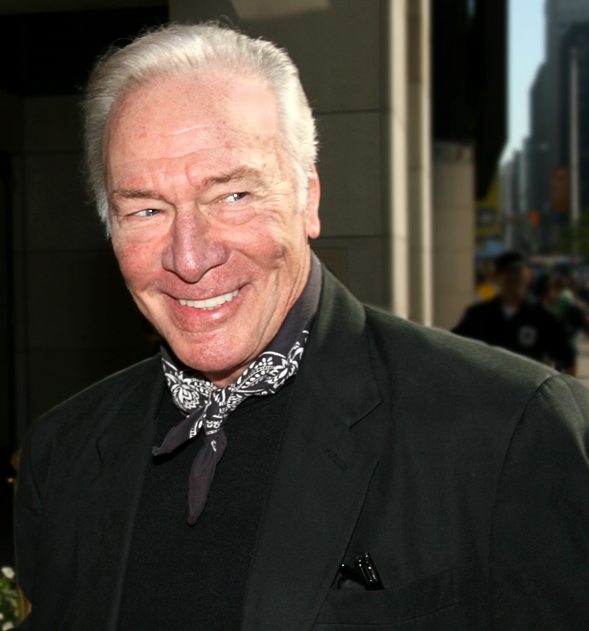 When Plummer asked Taylor for his memoir what her first thoughts were on meeting him, she was candidly honest:

“Oh, yes, we tumbled into bed and all that, but I didn’t like you very much. I thought you were the most conceited prig–the way you ponced about in that big convertible of yours. And you drank far too much–but there was something, I suppose...”

In his 2008 memoir, In Spite of Myself, Christopher Plummer calls Elaine Taylor “my partner and my life … my light in the wilderness.”

They married in October of 1970 in Montreal, and soon after Plummer gave up drinking hard liquor (he still enjoys a glass of wine.) The clincher may have been his wife Elaine telling him:

“Just look at yourself in the mirror. You think you’re so attractive when you drink. You’re not. You are not a charming drunk.”

During the 1970’s, Christopher Plummer continued to enjoy leading-man roles on stage, television and in the movies. He won his first Tony Award in 1974 for his performance as Cyrano de Bergerac in the Broadway musical Cyrano (from May-June 1973). On television, he won his first Emmy Award as Outstanding Lead Actor in a Limited Series in 1977, for The Moneychangers.

Baby boomers and seniors may also remember seeing Christopher Plummer in starring or co-starring parts in these films:

By the early 1980’s and the beginning of his 50+ years, Elaine and Christopher Plummer had moved to the U.S., in part to escape British taxes. The Plummer’s bought an old farmhouse in Connecticut and were busy renovating it when interviewed by People magazine in March 1982; in 2015 it sold for over $11 million.

Plummer began appearing more frequently on Broadway and in the movies. His performance as Iago in Othello on Broadway prompted this review by New York Times critic Walter Kerr: “Plummer’s demonic exertions constitute quite possibly the best single Shakespearean performance to have originated on this continent in our time.”

The list of movies starring Christopher Plummer during the early 1980’s includes films with these favorite baby boomer actors:

By the mid 1980’s, 50+ Christopher Plummer began to appear in more supporting roles vs as a leading man. He also began to take on voice-acting roles, and could be heard in animated movies such as The Velveteen Rabbit (1985). Plummer was a regular on the TV series Counterstrike (1990-1993), co-starring with Simon MacCorkindale. Simon MacCorkindale and Plummer later co-starred in The Dinosaur Hunter (2000), a TV adventure movie.

Baby boomers and seniors may remember these Christopher Plummer films from the latter half of the 1980’s and the early 1990’s:

Christopher Plummer continued to do more voice-acting work throughout the 1990’s. He was the narrator in several animated “Madeline” movies, and won his second Emmy Award for his narration in the animated Madeline TV series (1993-1994). Baby boomers and their children might remember hearing him voice the Grand Duke in the animated feature film Rock-A-Doodle (1991).

After becoming a senior citizen in 1994, Plummer showed no signs of retiring. He could be seen on screens at the movie theaters and on television. Some of his more notable works as a new senior citizen included:

Christopher Plummer was a senior citizen when he won his second Tony Award in 1997 for his Leading Actor performance on Broadway in Barrymore. 14 years later, a now octogenarian senior Christopher Plummer would star as Barrymore (2011) in what was essentially a one-man movie.

During the latter half of the 1990’s and into his senior citizen years, Christopher Plummer he co-starred in several TV films, including:

In 1999 Christopher Plummer became a septuagenarian senior citizen. He continued to do even more voice acting, in video games and animated movies, and can be heard in the box-office and critically successful movie Up (2009) as Charles Muntz.

Other movies and television projects featuring Plummer during his septuagenarian senior years were:

Our Fathers (2005), a TV drama co-starring Christopher Plummer, Ted Danson, Brian Dennehy, Daniel Baldwin, Ellen Burstyn, Kenneth Welsh, and Jan Rubes, explored the subject of sexual abuse within the Catholic Church. Christopher Plummer was nominated for a Primetime Emmy Award for Outstanding Supporting Actor – Miniseries or a Movie, for his performance as Cardinal Bernard Law in Our Fathers.

Irish actor Colin Farrell and Christopher Plummer co-starred in 3 movies between 2004-2009, beginning with the historical biography Alexander (2004). Their Alexander co-stars included veteran actors Anthony Hopkins (whom Plummer had co-starred with in the 1978 movie International Velvet, and Val Kilmer.

Not content with providing Emmy-nominated performances during his 70’s, Plummer also continued to appear on stage. He garnered two more Tony Award nominations, for his performances on Broadway as King Lear in King Lear (2004), and as Henry Drummond in Inherit the Wind (2007).

Since becoming an octogenarian senior citizen in 2009, Christopher Plummer has continued to act on stage, television, in the movies, and in voice roles. Always a prolific and compelling actor, his performances have continued to captivate audiences in such movies as:

Christopher Plummer won his first Academy Award for his Supporting Actor performance as dying father and widower Hal Fields, in the romantic comedy Beginners (2010). His plays a senior who finally comes out of the closet; Ewan McGregor is his on-screen son Oliver Fields, Goran Visnjic is Hal’s younger lover, and Mary Page Keller is Oliver’s mom. At age 82, Christopher Plummer became the oldest actor or actress to win an Actor Academy Award.

Plummer told The Globe and Mail in 2012 that to keep physically and mentally fit as an octogenarian senior, he still works out regularly at a gym and watches what he eats. To spare his knees, he’d just given up playing tennis.

In the movie Elsa & Fred (2014), actress Shirley MacLaine and Christopher Plummer portray a pair of heart-tugging seniors near the end of their lives, who discover achieving their dreams and true love are both still within their grasp. Co-starring with them in Elsa & Fred were George Segal, Marcia Gay Harden, Chris Noth, James Brolin, and Scott Bakula. Plummer had with Shirley MacLaine before, in the film Closing the Ring (2007) starring Neve Campbell. Below, Shirley MacLaine and Christopher Plummer at the 2014 Miami Film Festival opening night, to promote Elsa and Fred. 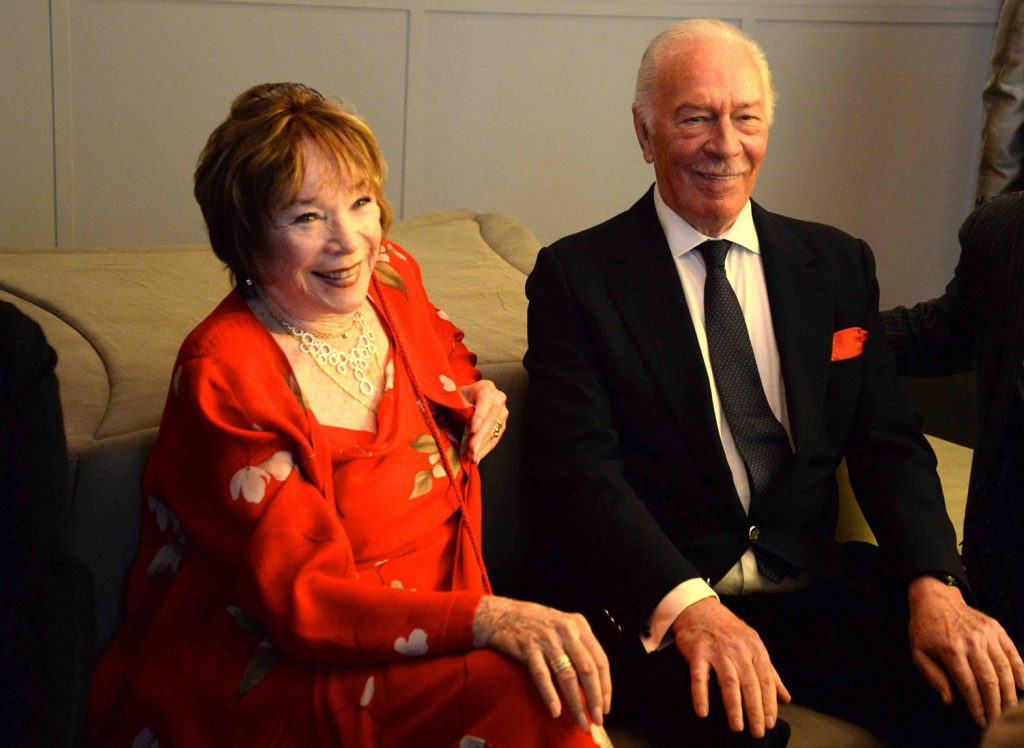 Most recently, octogenarian senior citizen Christopher Plummer could be seen by his senior and baby boomer fans in Danny Collins (2015) with Al Pacino, Annette Bening, Jennifer Garner, and Bobby Canavale; and co-starring as Kaiser Wilhelm II in The Exception (2016) with Lily James.

In the Canadian-German feature film Remember (2015), Christopher Plummer co-stars with Martin Landau as elderly Holocaust survivors on a quest to bring a concentration camp nemesis to justice. Landau’s character cannot physically leave their long term care centre, and Plummer’s character should not (he has dementia). Christopher Plummer and Martin Landau had co-starred together several times before, beginning 24 years earlier with the sci-fi thriller Firehead (1991), which included actors Chris Lemmon and Landau’s girlfriend Gretchen Becker in the cast. They were paired onscreen again in Mistress (1992), and worked together in the animated movie 9 (2009).

Currently 4 projects are in the works for Christopher Plummer in various stages – a schedule that would make many a younger actor green with envy. He’s filming The Man Who Invented Christmas, starring as Ebenezer Scrooge, with Jonathan Pryce; and Cliffs of Freedom with Billy Zane. Plummer is set to begin filming the movie The Last Full Measure, and has completed filming on Boundaries with Christopher Lloyd and Vera Farmiga, Bobby Cannavale, and Peter Fonda; Boundaries is set to premiere in 2017.

In 2016, Christopher Plummer and his wife Elaine celebrated their 46th wedding anniversary.