The Prince-Bishops City of Trento

Trento’s claims to fame are it’s rich history as a centre for Prince-Bishops of Trento, silver mining, and as the modern university town it is today. 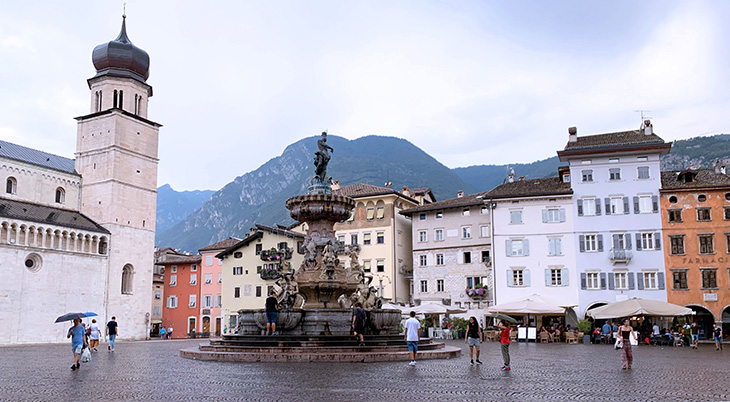 As with other South Tyrol regions, the countryside here is home to plentiful apple orchards and vineyards. 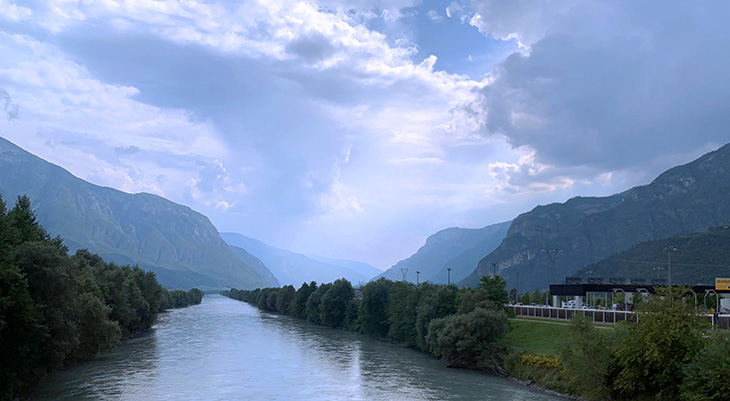 Located alongside the Adige river on an ancient Roman route north from the Italian cities of Verona and Bolzano to Innsbruck, Austria, Trento’s historical roots in the Adige Valley are tied to these neighboring areas.

On a recent Insight Vacations bus tour of Northern Italy, our driver took us north from Verona along the Brenner Autostrada beside the Adige River, on the way to an overnight stay in Trento. 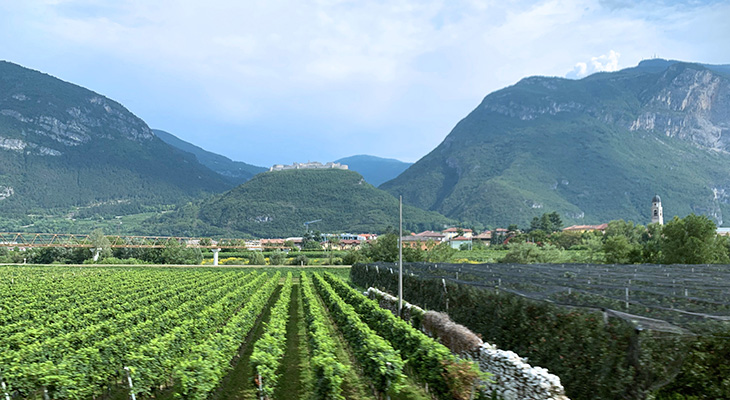 Several ancient castles can be seen along this route from the motorway, but Castel Beseno in the Adige Valley near Trento was the biggest – and most visible, perched as it is atop a hill. According to Trentino.com, the castle has existed since the 12th century (and possibly earlier), as a home to the Da Beseno family. The Trapp family took over Castel Beseno in 1470, and in succeeding years and centuries it was renovated; today it’s a museum with spectacular views of the Adige Valley.

Archaelogists have determined the city of Trento was originally a Celtic village that was conquered by the Romans some time in the 1st century BC, when it was renamed Tridentum, in tribute to Neptune (Tri Dentum / Three Teeth), for the 3 mountains that surround the town.

Emperor Conrad II of the mighty Holy Roman Empire created the Prince-Bishops of Trento principality in 1027, which lasted until 1802. 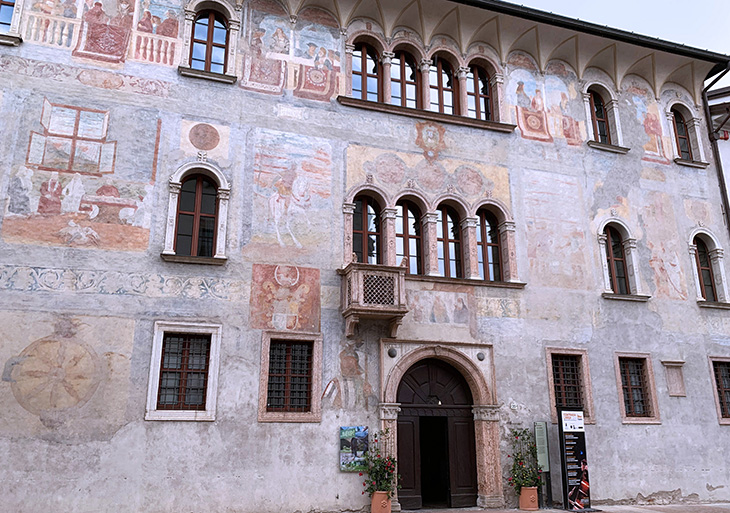 Renaissance Palazzo Geremia is covered in beautiful frescoes and dates back to the early 1500s. Today it’s a city council meeting room and city hall.

From 1809-1814, Trento was part of French General Napoleon Bonaparte’s short-lived Kingdom of Italy. It then reverted to the Hapsburg Empire of Austria-Hungary.

Trento and Bolzano in the south Tyrol have been part of a unified Italy since the end of WWI, with a short interval during WWII (1943-1945) when Germany invaded Northern Italy and annexed the South Tyrol.

Today Trento is a pretty university town that boasts a high standard of living for it’s inhabitants, and a rich history. 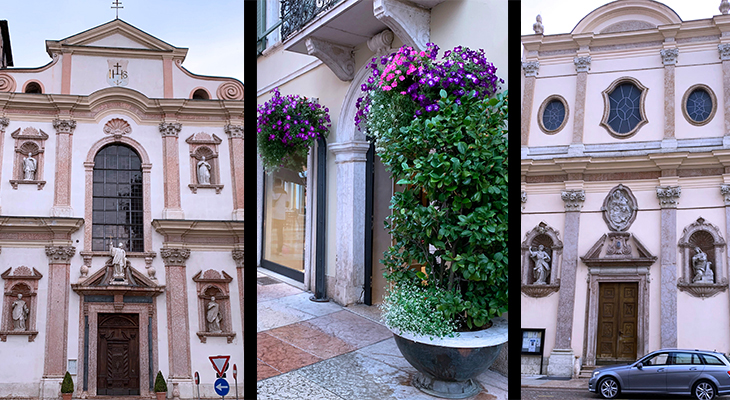 The Church of San Franceso Saverio (above left) is from c. 1711, and Chiesa dell’Annunziata (above right) was built in 1715 on via Rodolfo Belenzani. Some of the streets and sidewalks in Trento are made of pink marble, and beautiful flowers spill over planters throughout the city.

It’s raining lightly when we arrive in Trento’s medieval Piazza Duomo in the heart of the old city. This large plaza is bounded by the Pretorio Palace, it’s imposing bell tower, the Cathedral of San Vigilio, and various cafes, shops and restaurants. 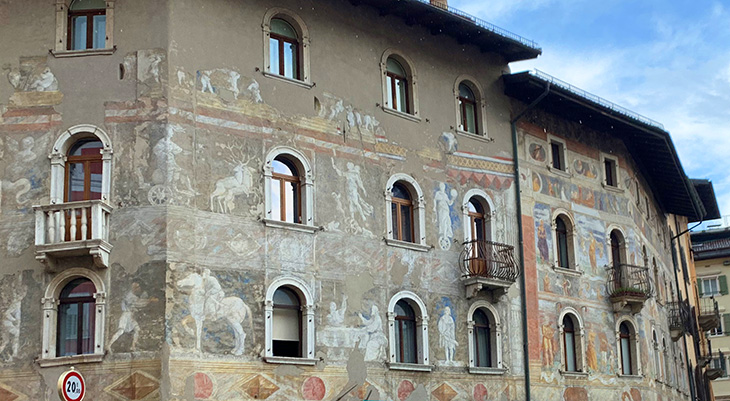 The beautifully frescoed Palazzo Malfatti on the Piazza Duomo is now a B&B with a cafe on the ground floor, on the corner of Piazza Duomo and Via Rodolfo Belenzani. 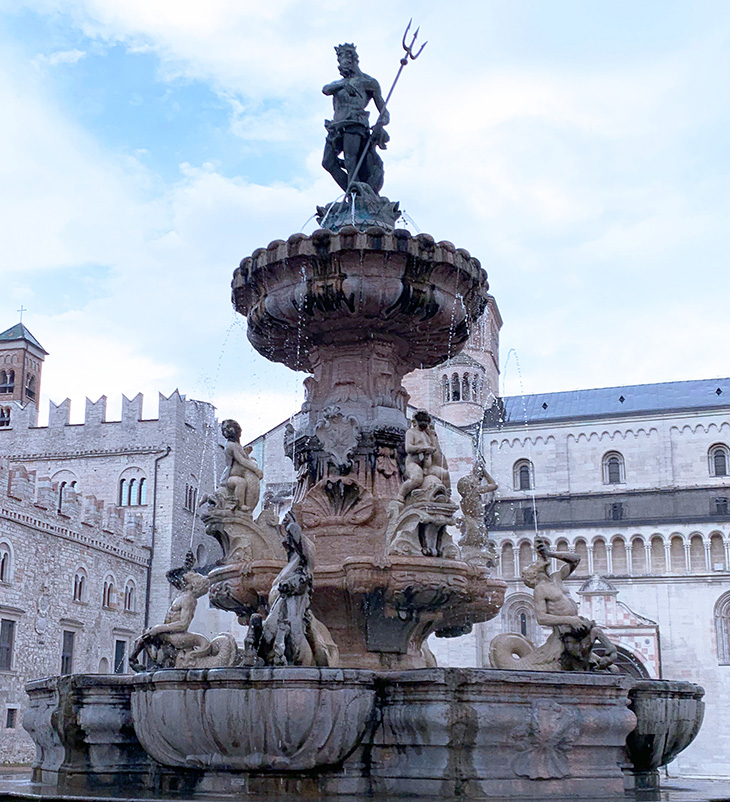 Created by Francesco Antonio Giongo and built in 1767-1768, the ornate and massive Fountain of Neptune in Trento’s Piazza Duomo draws the eye from any direction. 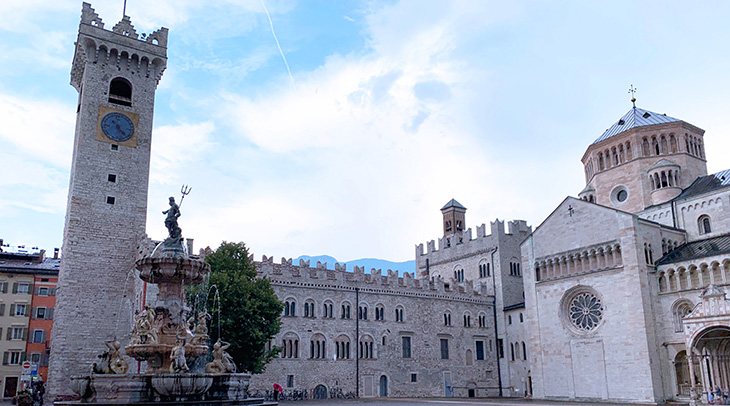 Trento’s Torre Civica (Civic Bell Tower) dates back to before the 1100s, when it was a fortified “keep” or tower. Over the succeeding centuries it’s height was added to. The tower was a city jail at one time, and the bell (Campana della Regna) rang to call public assemblies for death sentences and executions, held in the Piazza Duomo.

The attached medieval Bishop’s Palace / Pretorio Palace was built in 1220 by Prince-Bishop Federico Vanga, on the ruins of the San Giovanni Battista and the San Biagio churches. Currently the Museo Diocesano Tridentino is located in this castle. The ridge of peaks along the top of the palazzo walls are called Ghibelline embattlements. At the other end, the castle is attached to the Cathedral.

Palazzo Pretorio was the home of the succeeding Prince-Bishops of Trento through the upper middle ages.

Cathedral of San Vigilio / The Duomo 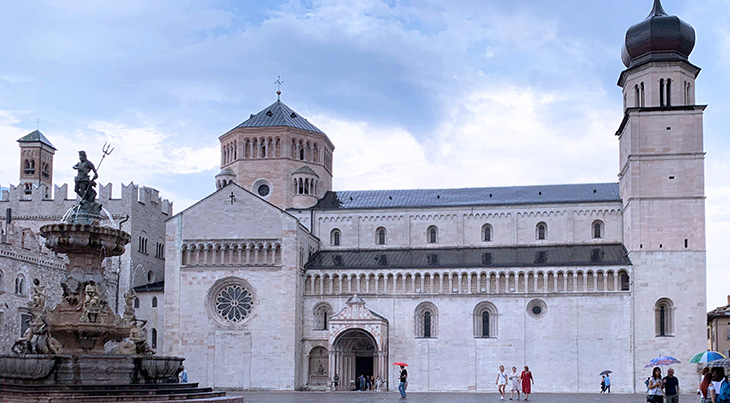 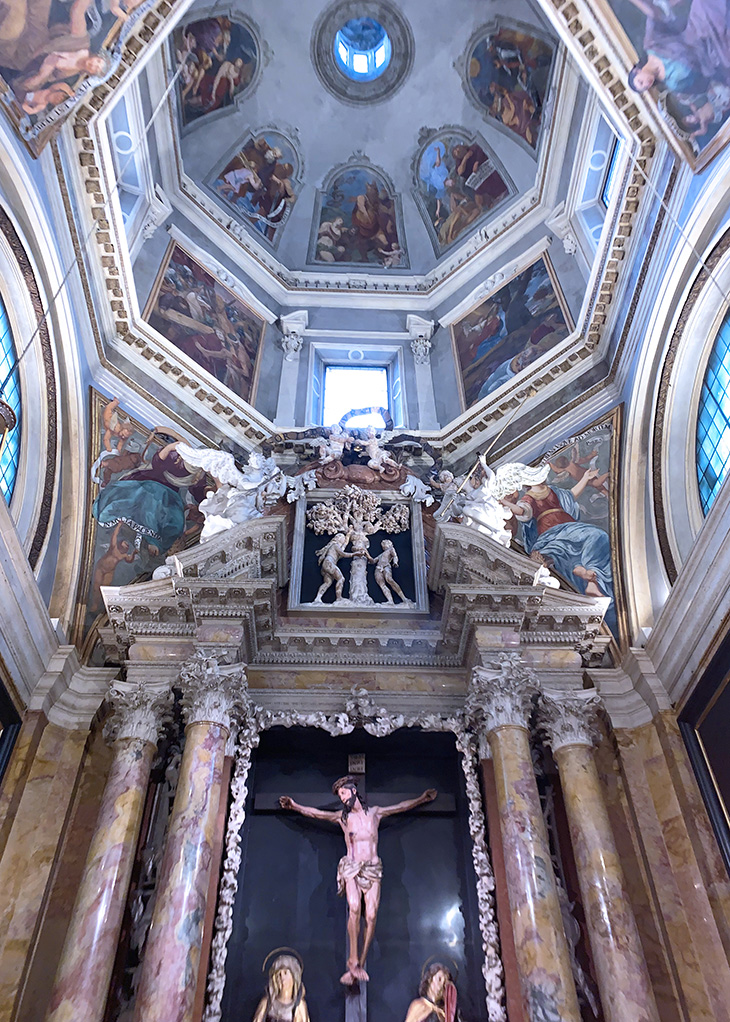 Also known as the Duomo di Trento, the interior of the imposing domed ceiling is richly decorated with frescoes and sculptures.

Built in the Gothic and Lombard-Romanesque style, the Cathedral of San Vigilio was built in the 1100s on top of the ruins of an ancient Roman basilica.

A large rose window “The Wheel of Fortune” from the 13th century is prominent both inside and out.

Below the Cathedral is an underground crypt which holds the tombs Saint Vigilio and many of Trento’s Prince-Bishops.

For a few Euro, you can tour the crypt / cemetary underneath the cathedral of San Vigilio. 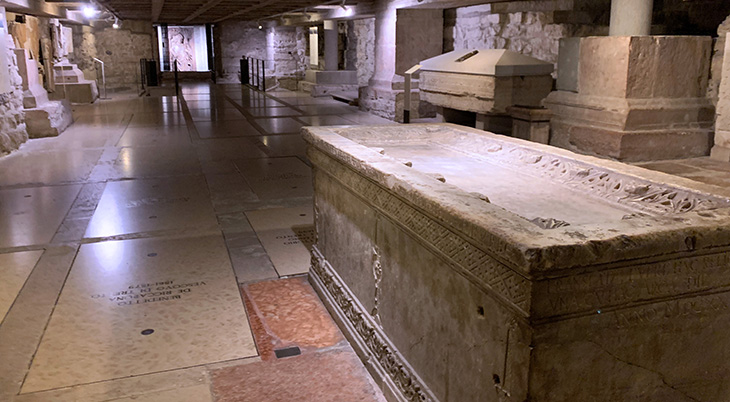 Prominent near the entrance is the hollow white marble sarcophagus of San Vigilio. The brochure/guide explains that it was used as an altar, until his remains were found in it in 1629.

Excavations between 1964 to 1977 exposed remains of the Early Christian basilica of Saint Vigilius, presumed to be from around the end of the fourth century. The structure’s original purpose was as a burial place for the missionaries murdered by pagans in 397 AD, and Vigilius, the third bishop and patron saint of Trento. 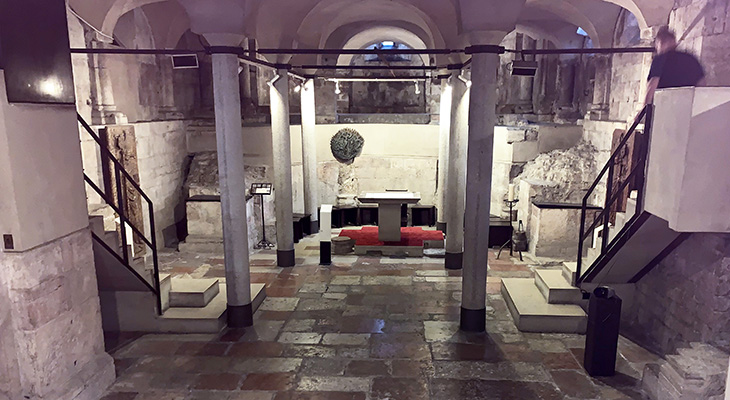 This ancient Early Christian basilica was about 43 metres long and 14 metres wide, with a 4-sided porch or atrium with three doors; the central door still functions today. The floor is covered by tombs set into the ground. 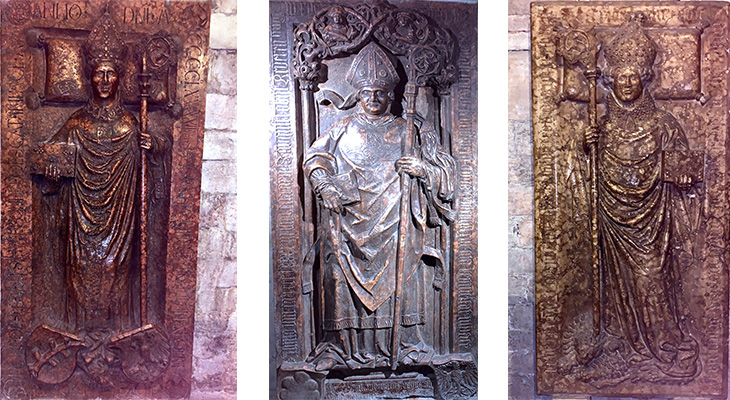 (Cathedral of San Vigilio Crypt, Tombs of the Prince-Bishops of Trentino, Italy)

Limestone tombs of the Prince-Bishops of Trentino dating as far back as 1156, line the walls. 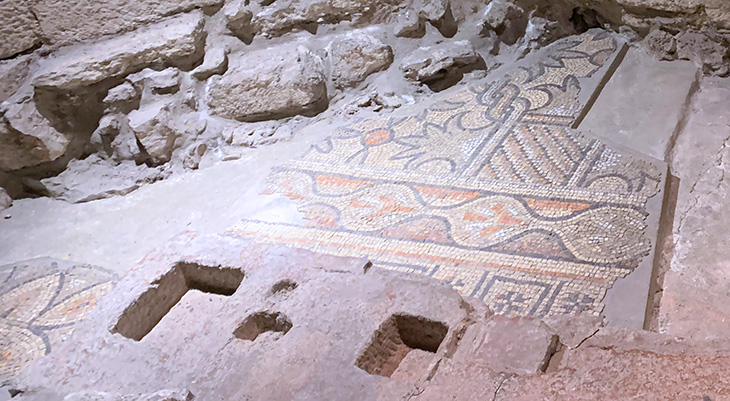 Fragments of a mosaic tile floor decoration from Roman times.

Our time in Trento ended too quickly. It was all part of a dream vacation to Italy that included visiting UNESCO World Heritage locations like Cinque Terre (and staying in Monterosso al Mare), a prosecco wine tasting,  seeing Roman ruins and the medieval town of Sirmione on Lake Garda, Lake Como, and touring the islands of the Venetian Lagoon.

Trento in Movies and Books

Want to watch some movies filmed in Trento and the surrounding areas? Over 150 feature films have Trento locales in them. Here are just a few of the more noteworthy:

The Great Manhunt (1950), a romantic thriller set in post WWII Europe, starring Douglas Fairbanks Jr., Glynis Johns, and Jack Hawkins. The Great Manhunt was filmed in Trento and the Dolomites in Italy, as well as United Kingdom film studios in Middlesex and Surrey.

The Italian Job (1969), an action-thriller starring Michael Caine, Noel Coward, Benny Hill, Raf Vallone, and Rossano Brazzi. The Italian Job was filmed in London and other locales in the U.K., Dublin and other places in Ireland, and in Italy – Trento, Valle d’Aosta, and Turin.

Concert of Intrigue (1954), a drama starring Brigitte Bardot, filmed in Rovereto and Trento.

***Photographs & text in this article are © 2019 Anita Hamilton. All rights reserved. Do not download or reproduce without written permission.***