Venetian Palazzos in Movies and Plays

Venice is filled with beautiful historic buildings and palazzos, some of which date back to medieval times – among the many the reasons why Venice and the Grand Canal continue to be a mecca for artists, filmmakers and tourists.

On a recent dream vacation to Italy, we spent a couple of days in Venice, walking around small neighborhoods and shopping on the Ponte Rialto / Rialto Bridge, before a gondola ride along some of the smaller canals near St. Mark’s Square in the heart of Venice.

Our trip ended with a final water taxi ride down the Grand Canal, a fitting ending to our time in Venice. It was only later, that I discovered that many of the historic Palazzo’s we saw in Venice have either inspired playwrights such as Shakespeare (Othello; The Merchant of Venice), or were used for filming television series and films. 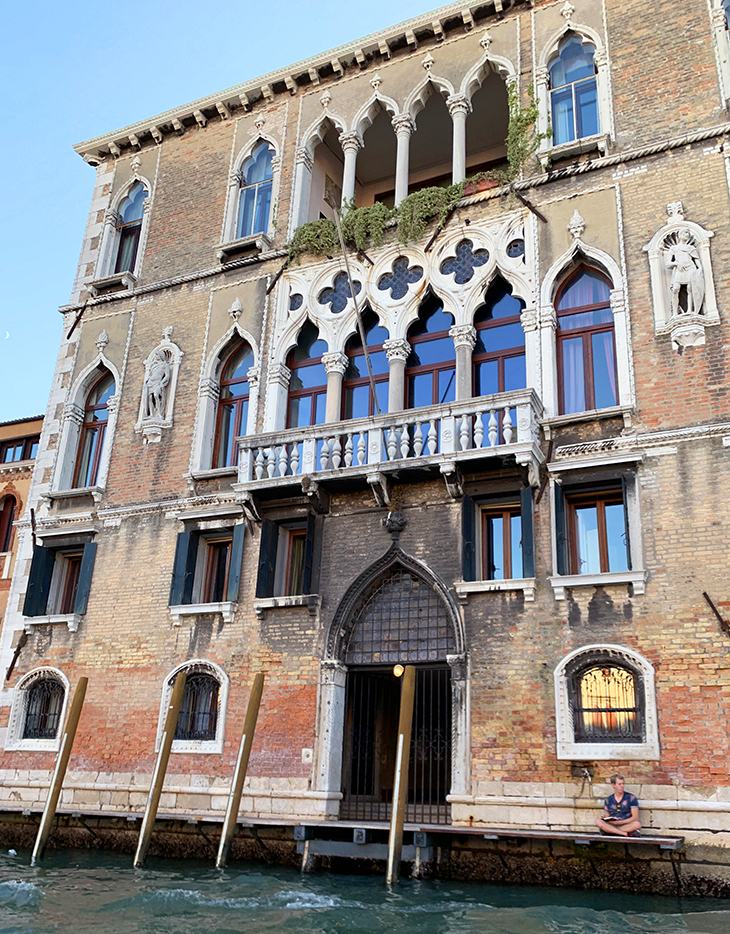 Palazzo Loredan was built on the banks of the Grand Canal in the 1400s by the noble Loredan family. After Doge (Duke) Francesco Loredan provided it to ambassadors to Venice as a home beginning in 1752, this Venetian Gothic palace became known as Palazzo Loredan dell’Ambasciatore. 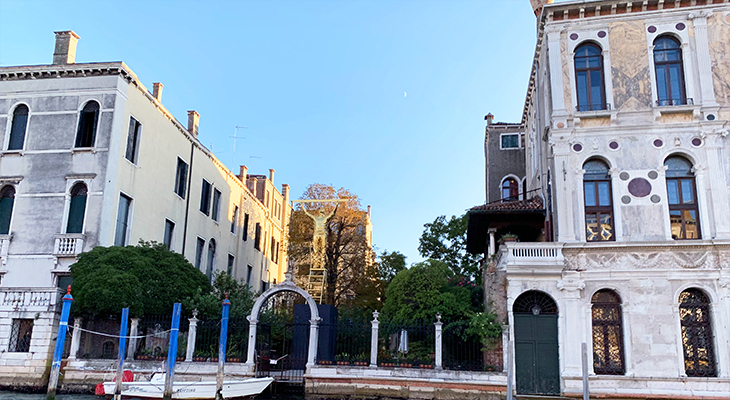 Above from left are the privately owned Palazzo Balbi Valier (aka Palazzo Molin Balbi Valier della Tressa; Palazzo Balbi-Valier Sammartini) and it’s adjacent  garden; on the right is the Contarini Polignac Palace.

Francesco Molin was the Doge of Venice from 1646-1655. According to Canal Grande di Venezia, the current Istrian stone palace was built in the 1600s on the remains of a gothic factory on the Grand Canal; initially a Venetian gothic style, it was later modernized. The alternate palace name of Palazzo Molin Balbi Valier della Tressa is due to a band on the Molin family crest that resembles a braid of hair.

The Balbi family were among the patrician founding families of Venice (going back to the 1100s); they later married into the Valiero family (another ancient family of Venice from the 1200s). Bertuccio Valier / Valiero was the Doge of Venice from 1656-1658, and his son Silvestro Valier / Valiero was the Doge from 1694-1700. The Balbi’s also built Palazzo Balbi, further south on the Grand Canal.

The Palazzo Balbi Valier garden was established in the 1800s, after the Palazzo Paradiso on that site had been torn down in 1828 to make way for warehouses. The Man Who Measures the Clouds gold statue was created and placed in the gardens for exhibition in 2019. Today the Balbi Valier palace is still privately owned (presumably by descendants of the Sammartini family), and has been divided into separate properties, including an art gallery. 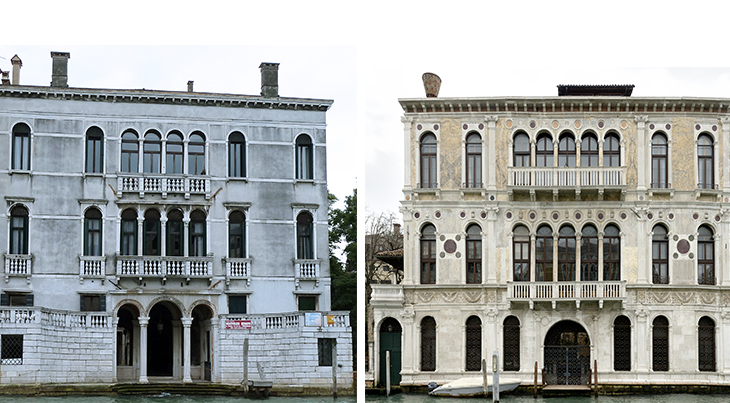 The palazzo changed hands several times until it was purchased in 1901 by the daughter of American businessman and inventor Isaac Singer (sewing machine innovator) and the Princess of Polignac, Winaretta Singer. The Contarini Polignac Palace is still privately owned by the Polignac family.

Approaching the section of the Grand Canal near St. Mark’s Square that opens out into the Grand Lagoon, on the left are a block of large connected palaces, beautifully preserved and with a range of architectural styles. 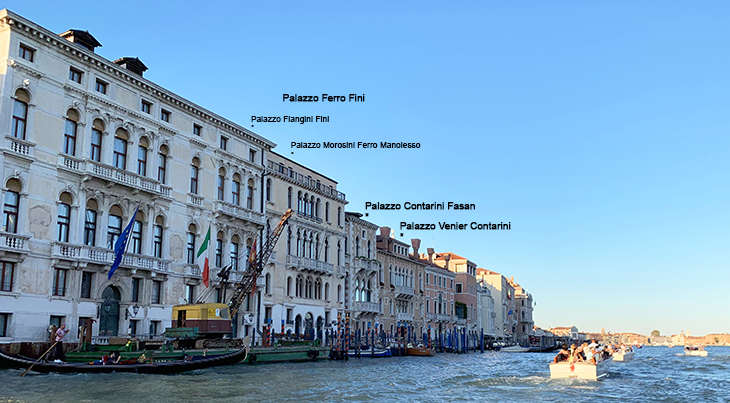 The Contarini and Da Ponte families had houses beside each other at this point on the Grand Canal, before they were bought by Greek lawyer Tommaso Flangini in 1638. He tore both the houses down and built a Renaissance palace on the combined site. In the latter half of the 1680s Jerome Fini (another Greek lawyer), bought the palazzo and renovated it. The Palazzo Flangini Fini was owned by the Fini family until it was divided into apartments and sold in 1860 to the Ivancich family; it forms the left side of Palazzo Ferro Fini. 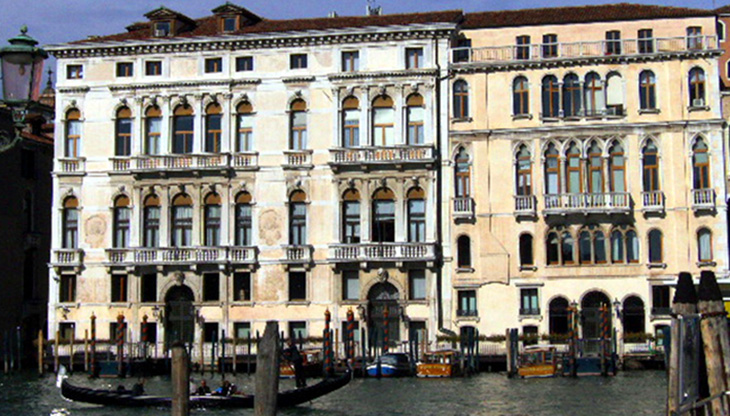 When the Ivancich family bought the Palazzo Morosini Ferro Manolesso in 1860, they turned it into the New York Hotel / Grand Hotel. By the end of the 1800s they had also acquired the Palazzo Flangini Fini, and integrated the two palaces into one large hotel. During WWII German and later American troops occupied the hotel. The Province of Venice bought the property in 1972 from the Ivancich family, and today Palazzo Ferro Fini is the home of the Veneto regional council. 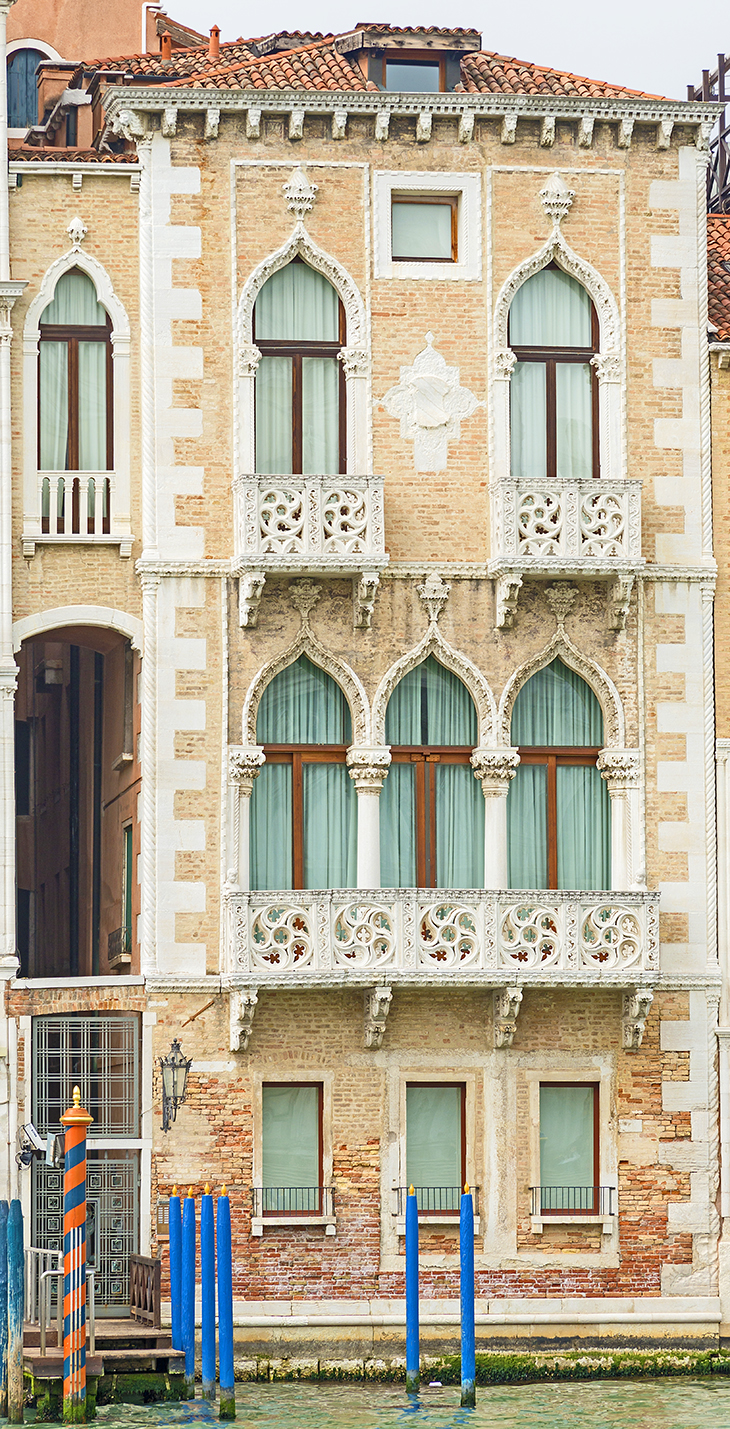 To the right of the Palazzo Ferro Fini is the much smaller, 15th century Venetian gothic Palazzo Contarini Fasan / Casa di Desdemona.

Built around 1475 by the Contarini family, legends have it that Shakespeare’s Othello was inspired by one of the two different Contarini family members from the early 1500s that may have been nicknamed “the Moor“, and that the Palazzo Contarini Fasan was a home to the Desdemona character in Othello. Northern Italy clearly inspired Shakespeare, as he also set Romeo and Juliet in the ancient city of Verona.

On the third level between two balconied windows, is a large bas-relief sculpture of the Contarini family coat of arms.

The palace was owned in more recent years by an industrialist who donated to the Italian Environmental Fund, and it’s open to the public on occasion.

Beyond the Palazzo Contarini Fasan is Palazzo Venier Contarini, another Venetian gothic palace dating back to the 1400s. Little is known about it (that I could find), and it is likely privately owned today. 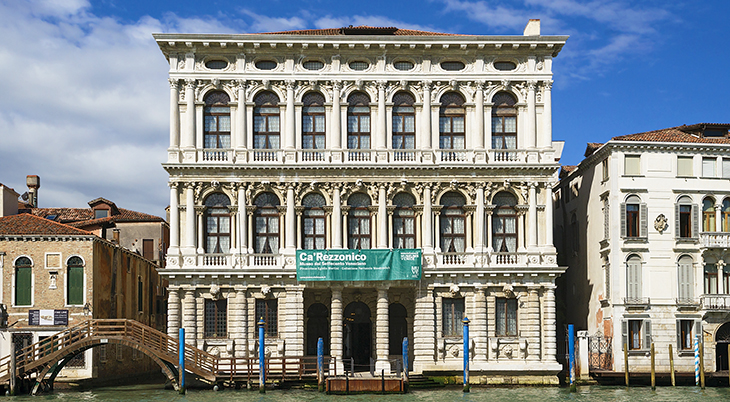 Filippo Bon tore down two previous houses that he owned on the site in order to begin building a palazzo in 1659; it was partially completed and decaying when he died in 1712, having long run out of funds.

Banker and merchant Giambattista Rezzonico bought the palazzo from Bon’s heirs in 1750, restoring and completing Ca’ Rezzonico in the mid-1750s. To celebrate Giambattista’s younger brother Carlo Rezzonico’s elected as Pope Clement XIII, and a family wedding that united the Rezzonico family with the wealthy Savorgnan family, Giambattista hired famous artists of that time to paint the ceilings of two of the salons in Ca’ Rezzonico. 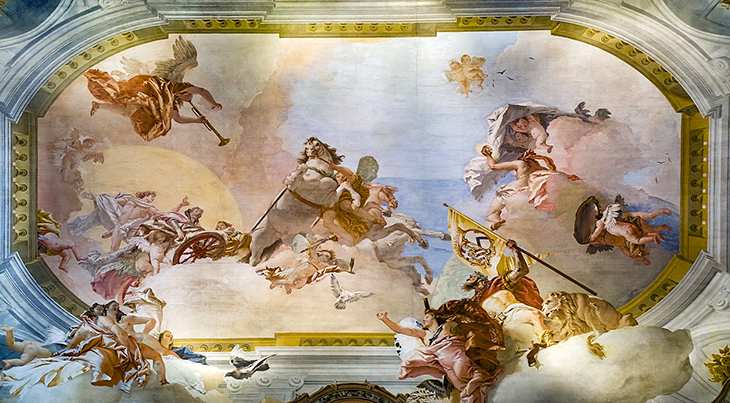 Venetian artists Giambattista Tiepolo, his son Giandomenico, and Giralamo Mengozzi Colonna painted the ceiling of the Ca’ Rezzonico’s Salon of the Allegory with a tribute to the happy couple. 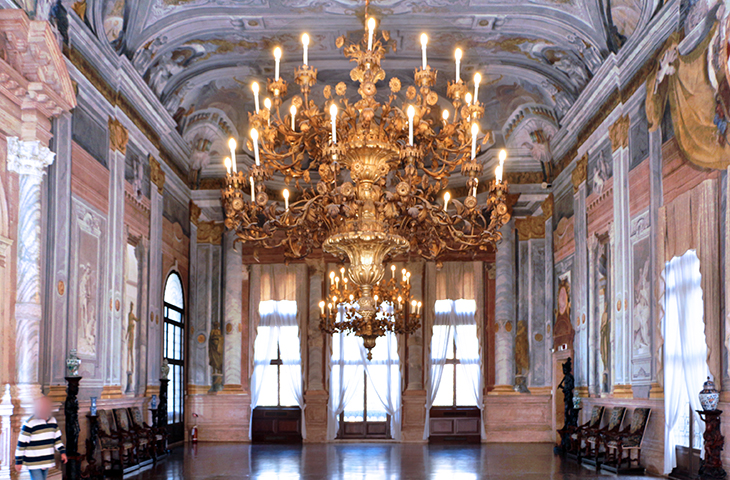 Frescos by Giovanni Battista Crosato and Girolamo Mengozzi Colonna decorated the ceiling of the the Ca’ Rezzonico’s magnificent ballroom.

A Matter of Time (1976), a fantasy-romance with Liza Minnelli as a chambermaid helping an elderly Contessa (Ingrid Bergman). Charles Boyer plays Bergman’s husband, Count Sanziani, while Isabella Rossellini and Fernando Rey have supporting roles. Filming for A Matter of Time took place in Rome and Venice; the Venetian baroque and rococo Ca’ Rezzonico on Venice’s Grand Canal stood in for the Contessa’s palazzo.

Befitting the Hotel Danieli’s long history and opulent furnishings, many movies have been filmed here. 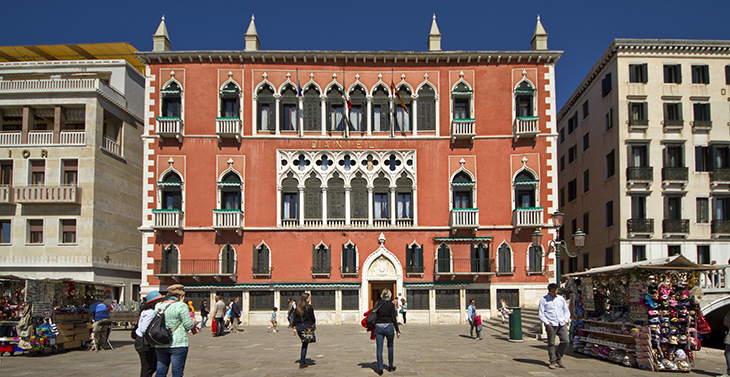 The Hotel Danieli website explains that Doge Enrico Dandolo (the first of four Venetian Doges to come from the noble Dandolo family) gained fame for conquering Constantinople in 1204. Palazzo Dandolo was commissioned by a member of the Dandolo family and built in the late 1300s.

Giuseppe Dal Niel rented part of the palazzo in 1822 and converted it into a hotel, renaming it for his nickname Danieli. Gradually he bought the rest of the hotel, becoming the only owner.

In 1895 Mr. Genovesi and the Campi Bozzi & C. purchased the hotel and made renovations, connecting it to the former Casa Nuova Palace across the Rio del Vin, by a suspension bridge.

Since the late 1400s, royalty, Italian and foreign heads of state and other dignitaries, and notable people from the arts, have stayed at this lush hotel. 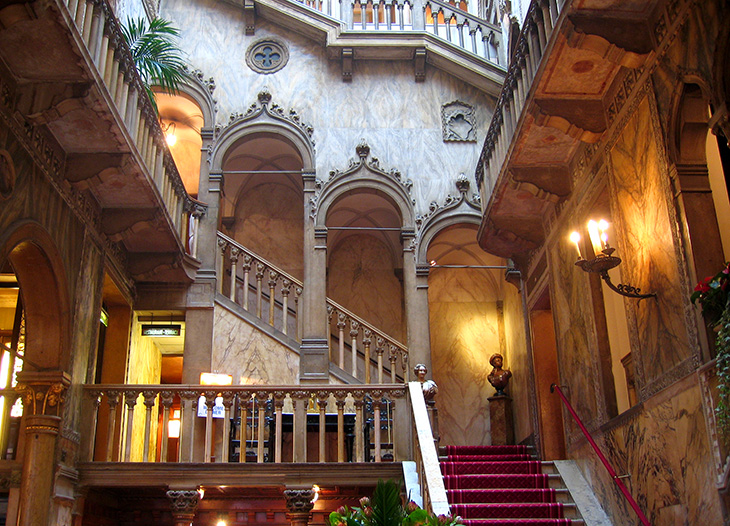 Several movies have filmed at Hotel Danieli on Rio Del Vin in Venice including:

Eva (1962), a romantic drama starring Stanley Baker as a Welsh coal miner who writes a successful novel and ends up at the Venice Film Festival. With Jeanne Moreau, Virna Lisi, and James Villiers. Scenes for Eva were filmed in Rome, and Venice, including Harry’s Bar off the Grand Canal, St. Mark’s Square, and Isola di San Michele in the Venetian Lagoon.

Moonraker (1979), with Roger Moore as spy James Bond, tracking down a hijacked spaceship. Lois Chiles as Holly Goodhead, Michael Lonsdale, Richard Kiel, Bernard Lee as M, Desmond Llewelyn as Q, and Lois Maxwell as Miss Moneypenny. Moonraker filmed in France, Argentina, Florida, California, Guatemala, Paraguay, Brazil, and England. Venice film locales for Moonraker include the Gritti Palace Hotel on the Grand Canal (the Grand Canal and other canals were featured in a gondola chase scene), Murano, and several sites in St. Mark’s Square (including both the Bell Tower and the Clock Tower). Hotel Danieli served as Holly Goodhead’s hotel room.

The Tourist (2010), an action-adventure movie starring Johnny Depp, Angelina Jolie, Paul Bettany, Timothy Dalton, and Rufus Sewell. Filmed in Paris and Venice at the Hotel Danieli, but the exterior of the Palazzo Pisani Moretta on the Grand Canal also served as the hotel’s exterior.

The Voyage (1974), a romantic drama filmed in Italian, but starring Richard Burton, Sophia Loren, and Ian Bannen. The Hotel Danieli and other locales in Venice, Rome, Palermo, Naples, and Milan were all film locations for The Voyage.

Unforgivable / Impardonnables (2011), a dark romantic tale of obsession with former Bond Girl Carole Bouquet. Unforgivable is set on Sant’Erasmo Island in the Venetian Lagoon, and among the other Venetian film locations for Unforgivable are the Grand Canal and Santa Maria della Salute.

*This article is for general informational purposes only. 50+ World does endorse these providers, nor does it receive remuneration from them.*

**Unless indicated otherwise, all photographs & text in this article are © 2019 Anita Hamilton. All rights reserved. Do not download or reproduce without written permission. Other images are either presumed to be in the public domain and/or creative commons licensed and sourced via Wikimedia Commons or Flickr**