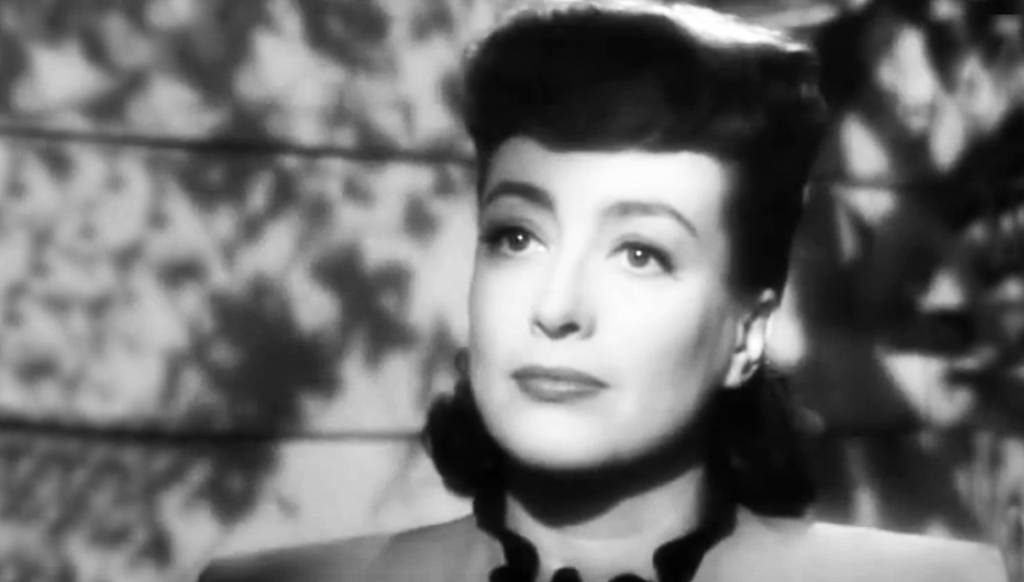 Lucille arrived in Los Angeles in 1925 after MGM offered her a $75/week contract, and appeared in small silent movie parts, either uncredited, or under her birth name. Her new stage name Joan Crawford was chosen via a Movie Weekly magazine contest in 1925 to “Name the Star“. 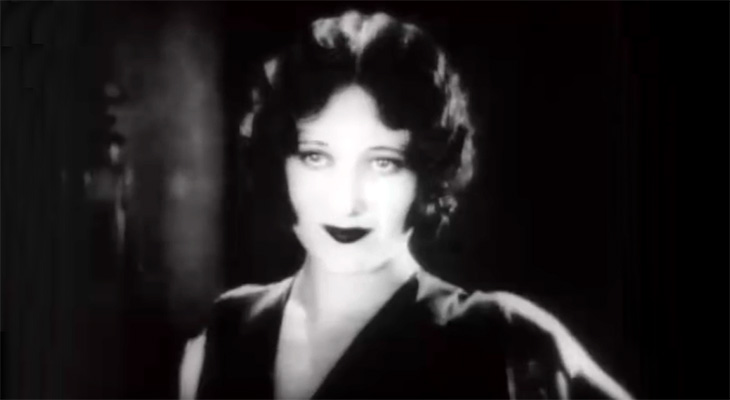 She attended Hollywood parties, dancing and winning contests for the Charleston and the Black Bottom, trying to attract the attention of the movie studios. Note the fashions and pose captured in this photograph of the Douglas Fairbanks – Joan Crawford wedding – a great example of a society wedding of the late 1920’s early 1930’s for Hollywood royalty like Crawford and Fairbanks.

“his father called her a cradle snatcher (she was five years older than the groom) and an opportunist who wanted to marry a famous name“.

Joan Crawford and Douglas Fairbanks appeared in the movie Our Modern Maidens (1929) and the short film The Stolen Jools (1931).

Check out the 1920’s flapper hairstyles, fashion, and dialogue in the short clip below from Our Modern Maidens – starring Joan Crawford, Douglas Fairbanks Jr., and the beautiful blonde silent film star Anita Page.

Together Joan Crawford and Douglas Fairbanks Jr. attended many Hollywood parties. They both successfully made the transition to “The Talkies”, which began in 1928.

Below, some clips from the 1931 opening of the Warner Bros. Western Theater (Wiltern Theater) in 1931, with Joan Crawford and Douglas Fairbanks Jr., Clark Gable and his second wife Maria Langham, and other Hollywood luminaries in attendance.

Among the many movies that Clark Gable and Joan Crawford both appeared in were 2 early films at the beginning on their career, that they were essentially extras in: The Merry Widow (1925) and Ben-Hur: A Tale of the Christ (1925).

Of the 8 movies that Crawford and Gable were leading co-stars in, 3 were released in 1931 alone – Dance, Fools, Dance with William Holden; Laughing Sinners with Neil Hamilton and Roscoe Karns; and Possessed with Van Heflin and Raymond Massey. Joan Crawford had top billing in each of these movies.

Joan Crawford’s popularity steadily rose during the 1930’s. She was placed third on a Top Ten Money Making Stars Poll in 1932 and appeared on it each year until 1936.

Below, Crawford played “bad girl” vamp Sadie Thompson, running away from her past in the drama Rain (1932). A missionary zealot (Walter Huston) and his prim wife (Beulah Bondi) take her to task. 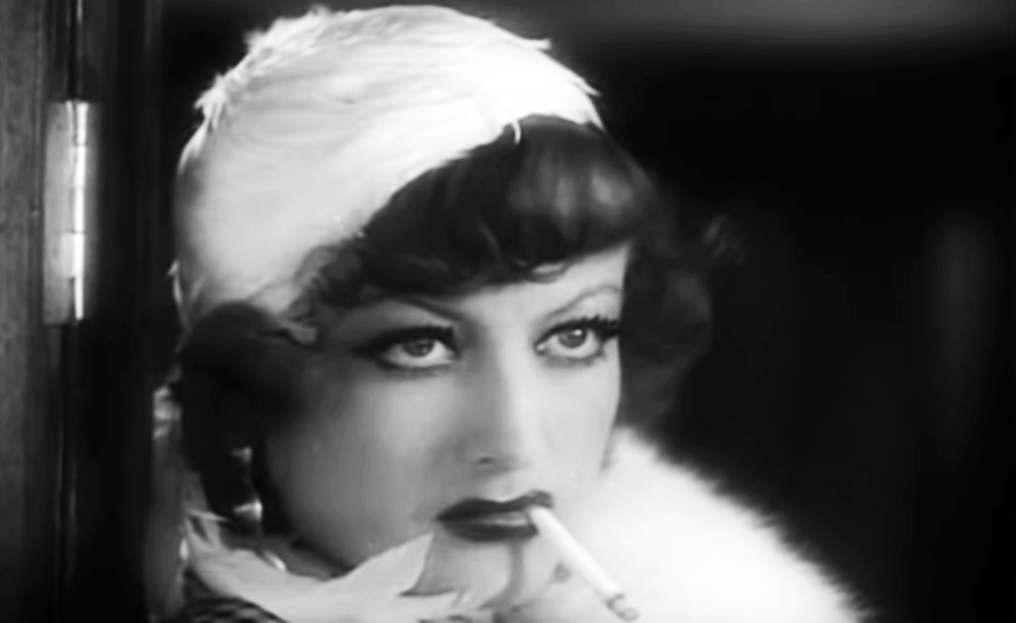 Fred Astaire, Franchot Tone, Clark Gable, and Joan Crawford are featured in a movie trailer for Dancing Lady, below.

Joan Crawford was paired again with Clark Gable onscreen twice in movies released in 1934 – Chained, and Forsaking All Others. Joan Crawford and Clark Gable’s final film as co-stars was Strange Cargo (1940). 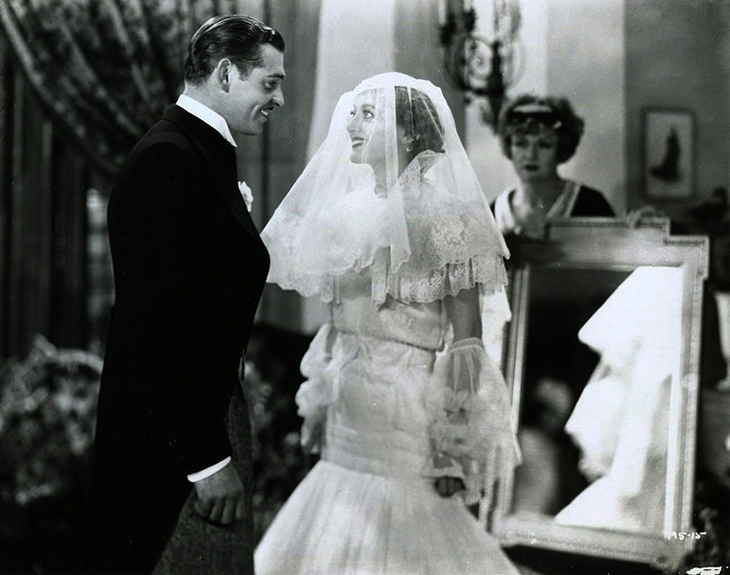 The same year that Dancing Lady was released, Franchot Tone and Joan Crawford also appeared in their second movie together – Today We Live (1933). Their co-stars in Today We Live included Gary Cooper, Robert Young, and Roscoe Karns. 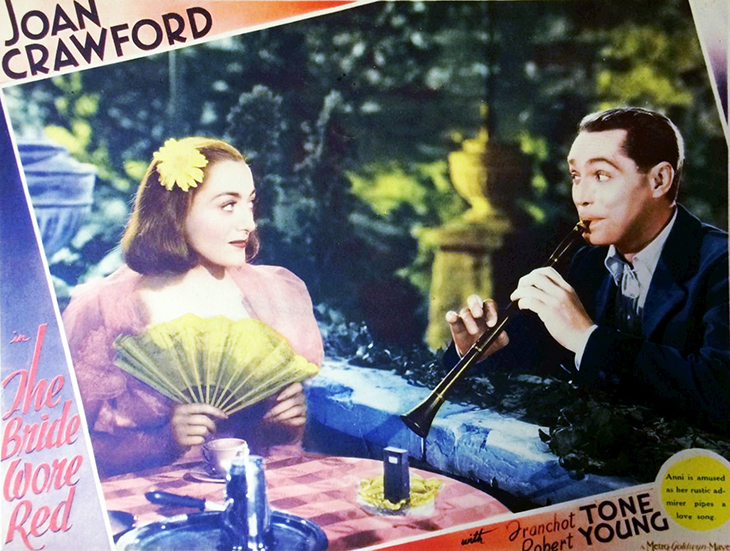 Franchot Tone’s career and aspirations didn’t match up to Joan Crawford’s, and he wasn’t happy playing second fiddle. Alcohol and physical abuse (by Tone) as well as infidelity (by both of them) contributed to their breakup. According to Crawford they remained friends until his death.

It was during this time that Joan’s long-standing rivalry with actress Bette Davis began; apparently Bette became infatuated with Franchot Tone after he had become engaged to Crawford, and he rejected her (or possibly he didn’t reject her, depending on who tells the story).

Ironically it was in 1938, one year after Life magazine named her first “Queen of the Movies“, that Joan Crawford was among a handful of stars called “Box Office Poison” by theatre owners. 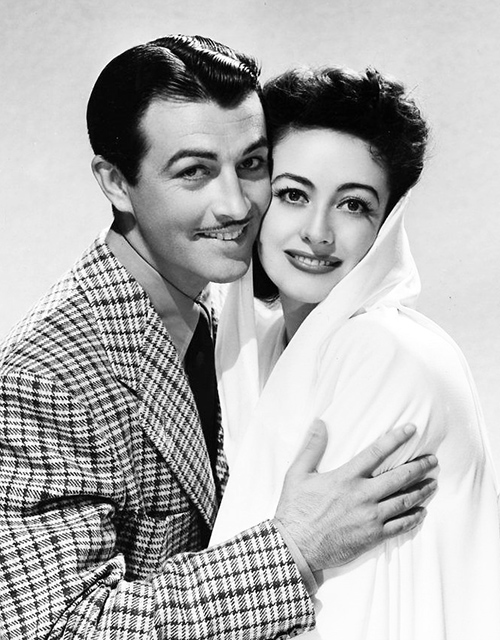 Crawford promptly signed a 3-picture deal with Warner Brothers in 1943. She continued to be paired with strong leading men and women onscreen:

Melvyn Douglas and Joan Crawford were paired onscreen twice, in A Woman’s Face (1941), and again in They All Kissed the Bride (1942).

Joan Crawford adopted 5 children. Her oldest daughter Christina Crawford was adopted in 1940 while Joan was single, after her marriage to Franchot Tone was finalized in 1939.

Joan then married her third husband, actor Phillip Terry, in 1942. They adopted their first son, named Christopher, in 1942; Christopher was reclaimed by his birth mother. Phillip Terry and Joan Crawford then adopted another son, whom they named Phillip Terry, Jr. 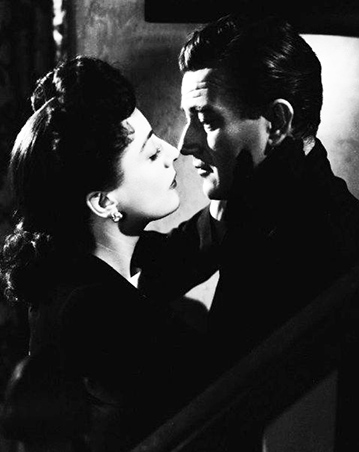 In the 1942 WWII film Reunion in France, Crawford played a French resistance woman in Paris, who hides an American pilot (John Wayne) from Nazi Germans.

Although her performances were still critically acclaimed, Crawford’s movies were not making as much money as they had done, and by 1943 her contract with MGM was cancelled after 18 years.

The large cast of the WWII musical Hollywood Canteen (1944) had both Joan and her arch-rival Bette Davis in the same picture.

Finally in 1945, Joan Crawford received an Academy Award for Best Actress for her performance in Mildred Pierce (1945), as a woman betrayed by her daughter (played by Ann Blythe). The dramatic film score for Mildred Pierce was courtesy of famed Hollywood movie music composer Max Steiner.

Her movie career was on the up again, which lasted until the late 1950’s. During the 40’s and 50’s Joan Crawford also worked periodically in radio and on television. 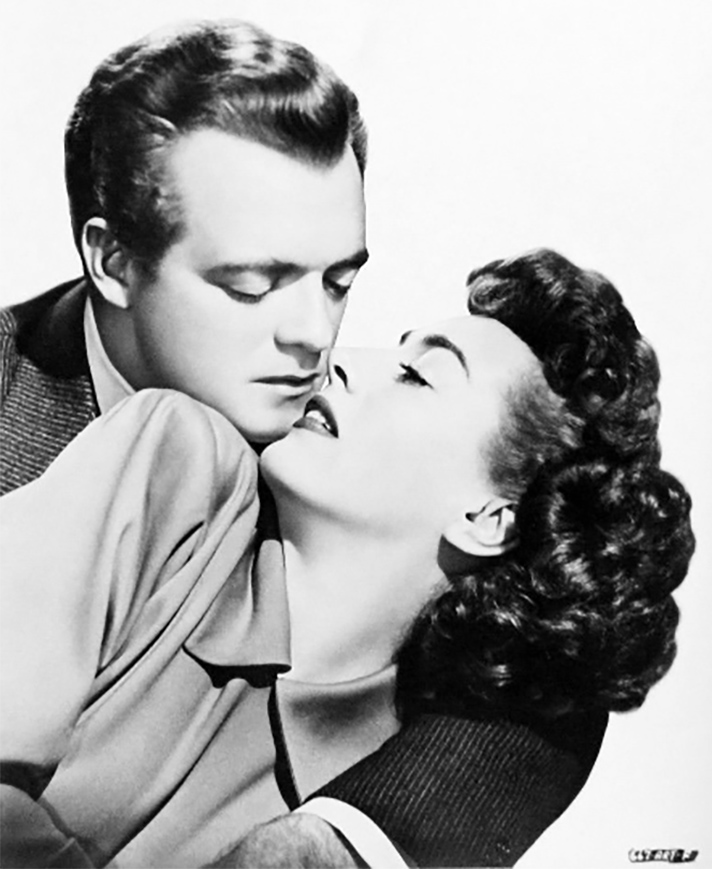 Other 1940s’s films of note for Joan Crawford include these dramas:

Her first adopted child, oldest daughter Christina Crawford, famously later wrote “Mommie Dearest” detailing the unhappy and according to Christina, abusive relationship that Joan had with both Christina and Christopher (both were disinherited by Joan).

This version of Joan Crawford is disputed by Joan’s twin daughters Cindy and Cathy, who were 7 years younger and apparently enjoyed a warm and loving relationship with Crawford. What isn’t in dispute, is that by the time Christina Crawford was 9, she and mother Joan often argued; Joan Crawford had an extremely controlling nature and neither Christina nor Christopher had submissive personalities.

In 1955 Joan Crawford married her 4th husband – Alfred Steele, President of Pepsi Cola. Steele went on to become Chairman of the Board and CEO of Pepsi Cola, and during their marriage Crawford estimated she travelled over 100,000 miles for Pepsi, eventually becoming an executive with the company. 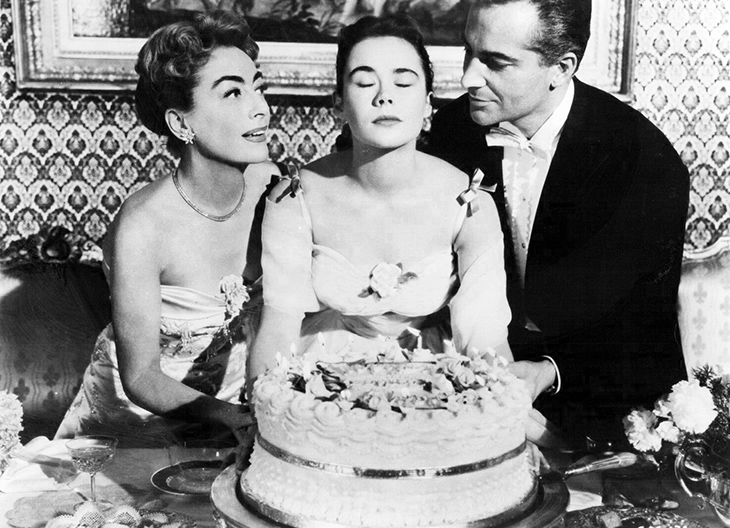 After her husband Alfred Steele died of a heart attack in 1959, Joan Crawford was left deeply in dept; to help pay off the debt, Crawford served on the Pepsi board of directors and began acting in horror films.

By 1962’s Whatever Happened to Baby Jane, Joan’s film career was winding down. She was cast alongside rival Bette Davis, and although they both survived the movie shoot and publicly said there was no feud, after the movie was over the gloves came off.

Below, Joan Crawford in a wheelchair as Blanche Hudson, and Bette Davis as her sister and the title character “Baby Jane” Hudson, are featured in the movie trailer for Whatever Happened to Baby Jane.

Bette Davis and Joan Crawford were again cast together in 1964’s Hush Hush Sweet Charlotte, and Joan Crawford ended up in hospital part way through shooting Differing reports say it was because of “harassment” by Davis, or alternatively, due to Crawford’s alcoholism. 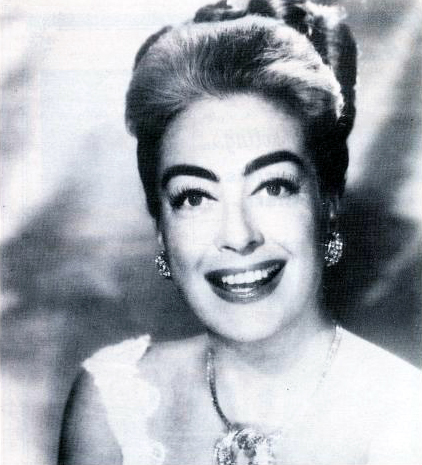 Hollywood Studio Magazine columnist Thom Montgomery covered a news conference for Joan’s “My Way of Life” (1971) self-help book for would be hostesses, fashionistas and movie stars. When asked her opinion of nudity in films, a 65+ Crawford boasted:

“If I want to see nudity I’ll look at myself in a full-length mirror when I get out of the shower. Looks pretty good, too!“

“I am so at peace with the world, that I am even having good thoughts about Bette Davis.”

In her senior years, from the early 1970’s until her death in 1977 from a heart attack (she was also battling cancer), Joan Crawford shunned public appearances. She wanted to be remembered as a glamorous movie star, according to her grandson Casey LaLonde:

“As you can imagine, my grandmother didn’t like ‘grandma’ or ‘grammy’ or even ‘grandmother’. She preferred to be called JoJo.“

Throughout her full-length feature film career which spanned 1925-1970, Joan Crawford appeared or starred in over 30 silent movies and 60 sound films. Below, an uncharacteristically almost makeup-less Joan Crawford early in her career, in 1932’s Rain. 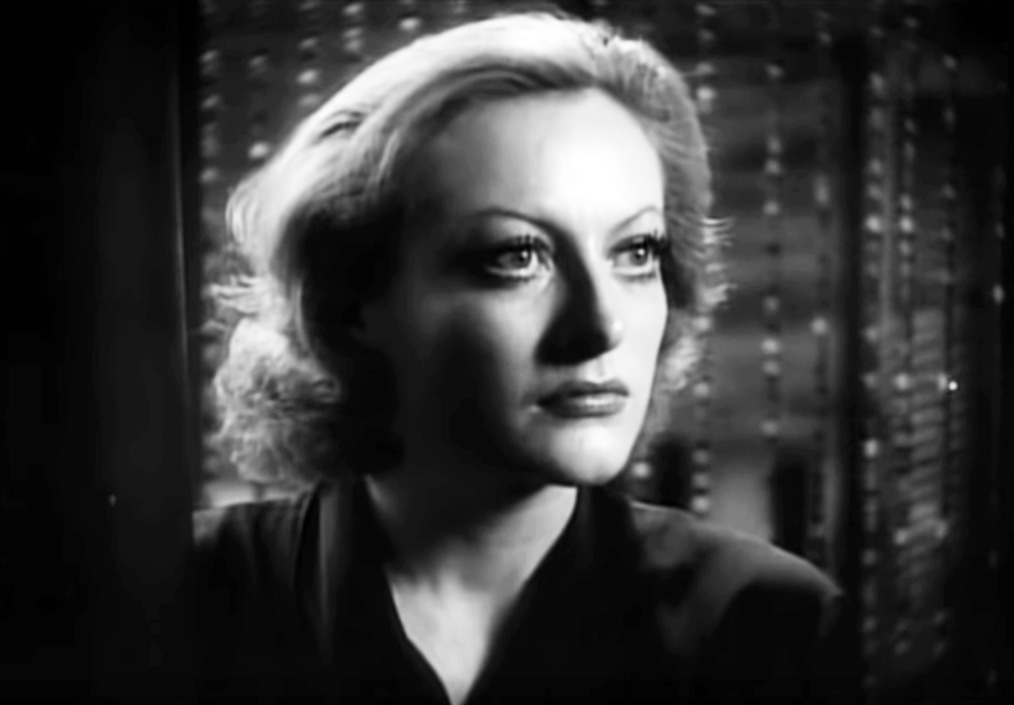