Sirmione and the Grottoes of Catullus

At the tip of a peninsula that juts out into Lake Garda’s southern shoreline, are the medieval town of Sirmione, Scaligero Castle, and the ruins of a Roman villa dating back to the end of the first century BC – the Grottoes of Catullus. 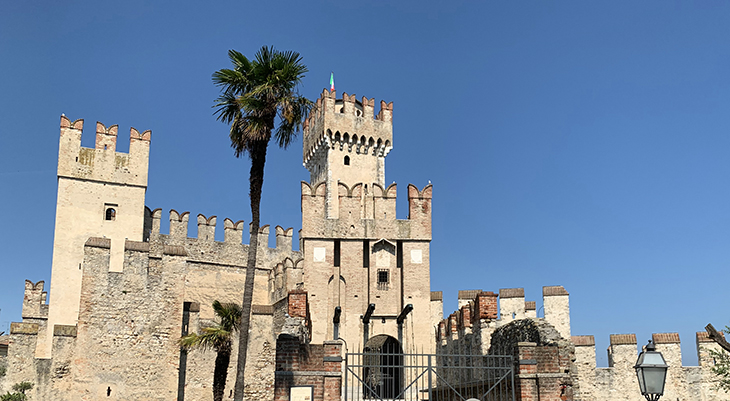 We recently enjoyed a 10-day tour of Northern Italy with Insight Vacations. Our tour began in Milan and took us to historic cities such as Bolzano,  Trento and Venice, circling back around to the Italian Lakes District encompassing Lake Como, Lake Garda, Lake Maggiore and Lake Orta. Before our bus pulled into the town of Sirmione I had never heard of it…now I understand why it’s been considered a hidden jewel.

Settlements on stilts (palafitte) existed in the Sirmione area of Lake Garda back in the 2000s-1000s BC.

The Roman poet Catullus (c. 84 BC – 54 BC), whose family was among the wealthy vacationers from nearby Verona who kept a villa here, references Sirmione in his homecoming poem,  Catullus 31. There have been many attempts at translating his verse from the original Latin over the centuries. 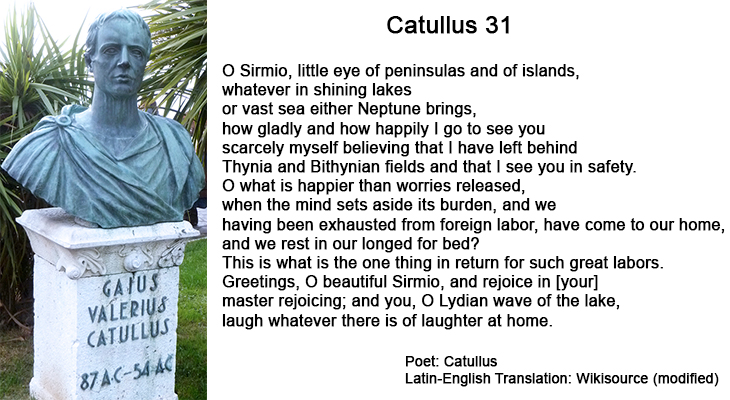 Note: Thynia and Bithynia were ancient names for locations on the respective north and south sides of the Propontis, an inland sea (today it’s the Sea of Marmara in Turkey).

Today Sirmione is a popular resort town, situated as it is on Italy’s largest lake, Lake Garda. It’s still got many of the medieval 13th century buildings, now converted into shops and restaurants, and Scaligero Castle.

New Sirmione and the “old town” of Sirmione are accessed by a walkway that goes over the Scaligero Castle moat. 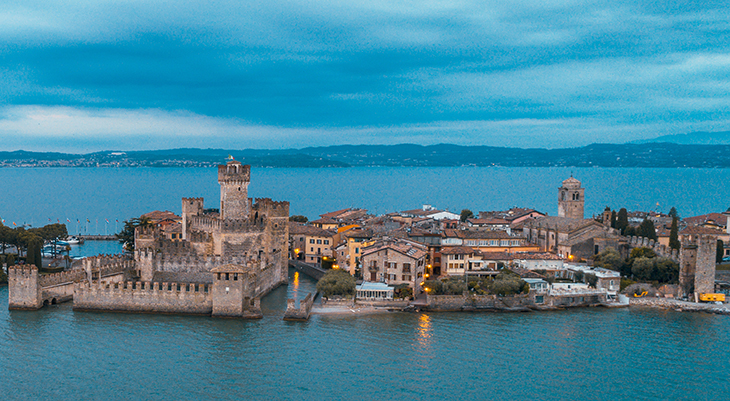 This section of the peninsula see above, encompassing Scaligero Castle, the old town of Sirmione, and the Grottoes of Catullus, is completely surrounded by water.

On the “new” side of the moat, views of Lake Garda’s marina, pink bougainvillea and plane trees with their distinctively mottle trunks, abound. 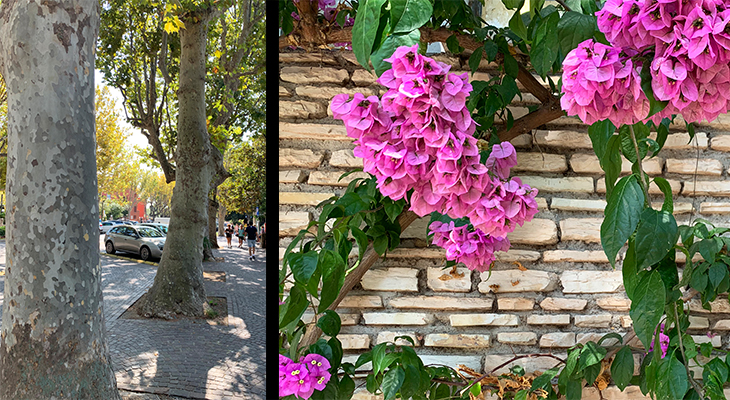 The streets of the old town of Sirmione are shaded by colorful historic buildings. 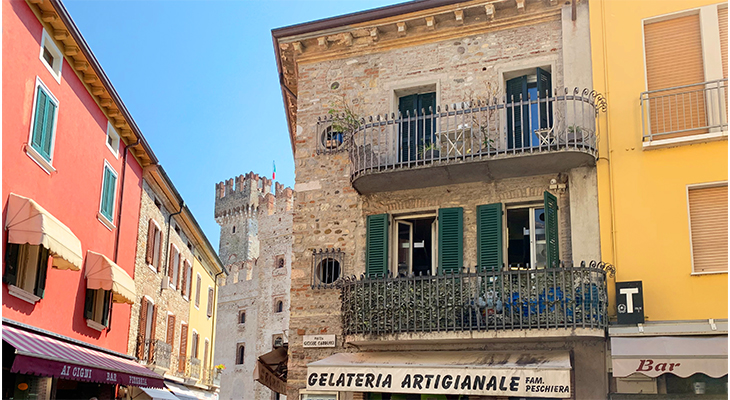 We took a break from walking around to cool off and enjoy a delicious pasta lunch at Il Girasole restaurant while we people-watched other tourists. 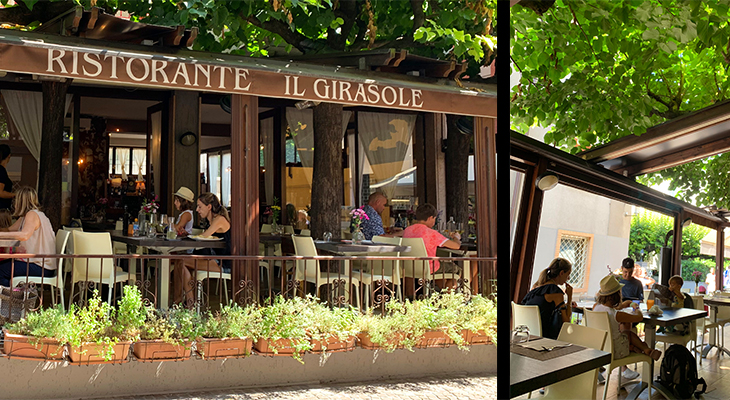 This charming restaurant has a section opening onto the street, that is completely shaded by a leafy tree.

Flowers abound on top of rock walls, town buildings, and castle walkway walls through the town. 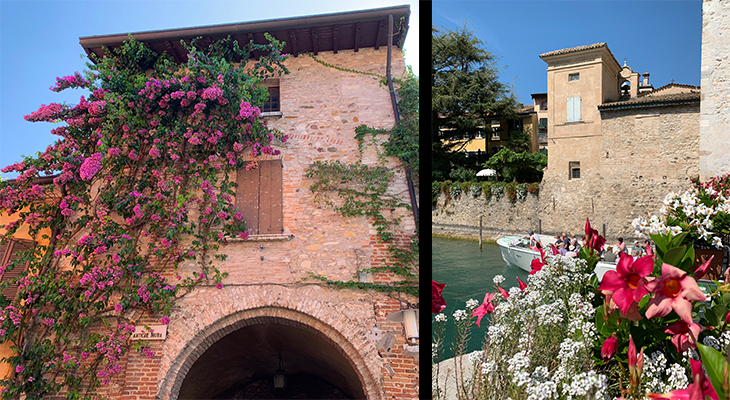 A moat separates medieval Scaligero Castle and the “old town” of Sirmione from mainland Italy. You can only enter the castle by a drawbridge (there are two of them.) Fortification walls extend out into Lake Garda for this sea port. 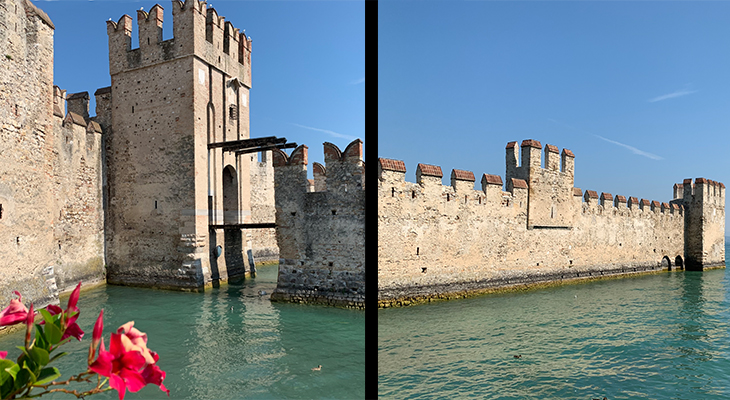 The Della Scala family who ruled Verona and this area of Lake Garda from the 1200s-1300s, began building Scaligero Castle c. 1277. Today there’s a small museum inside, with local medieval and Roman artifacts. 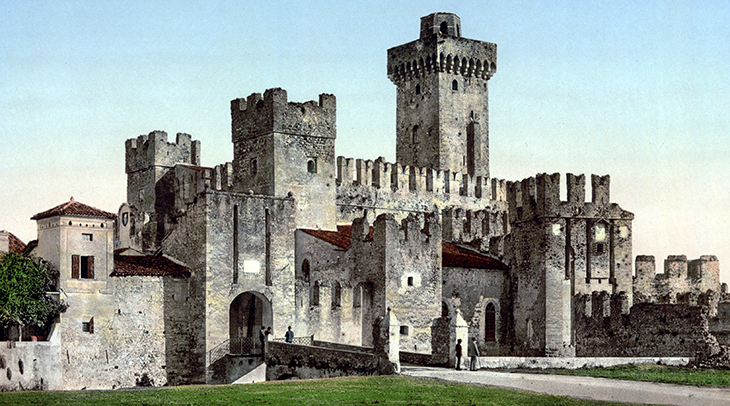 Scaligero Castle hasn’t changed significantly in the past 120 years, but there has been significant development of the area in front of the castle on the mainland.

There are several castles around Lake Garda. On the western side of the lake are the 10th century Castello di Moniga, and Padenghe Castle (built c 1145).

North of Sirmione and Scaligero Castle, on the eastern shores of Lake Garda, are two more Della Scala castles – Castello Scaligero in Torri del Benaco, and Castello Scaligero di Lazise. The castle in the town of Torri del Benaco was built in 1338 and is now a museum. The castle of Lazise has existed as a fortified village since the 9th century; the Della Scala family gained control of the area in approximately 1200 and several castle renovations were done by them in the 1300s.

We take a “train” ride to the very tip of the peninsula, to see the Grotte di Catullo / Grottoes of Catullus. Just outside the entrance to the Grottoes of Catullus, there is a park named for famed Greek opera singer Maria Callas, who used to have a villa here in Sirmione. 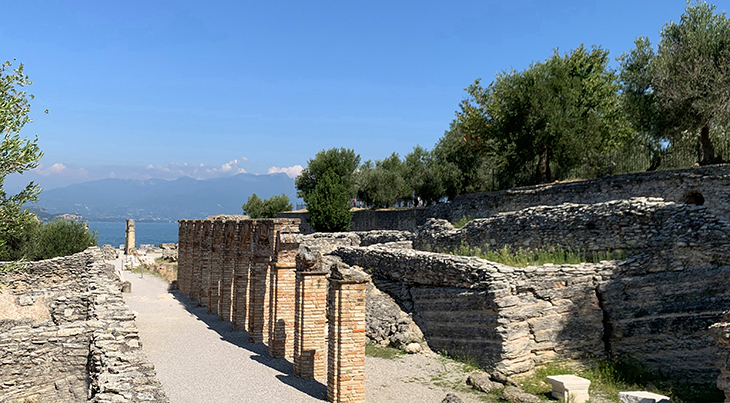 After exiting the Grottoes of Catullus museum, we walk down a long path with olive trees on one side and an ancient defence wall, erected long after the villa was no longer in active use, probably from around 300-400 AD. 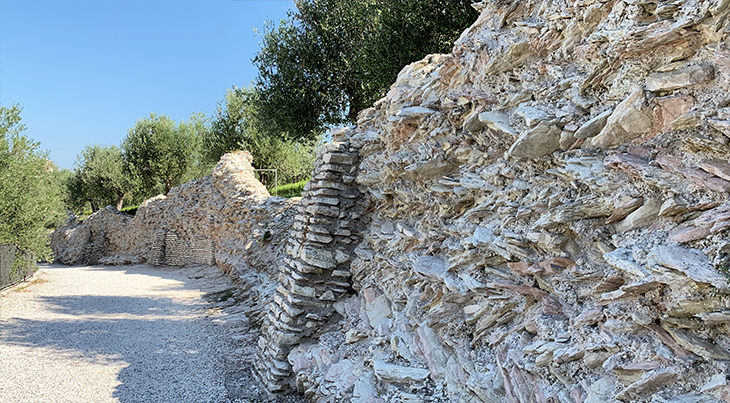 It’s very peaceful and quiet here, unlike the busy streets of Sirmione’s old town. The villa had three floors, supported by powerful substructures made of bricks and limestone. 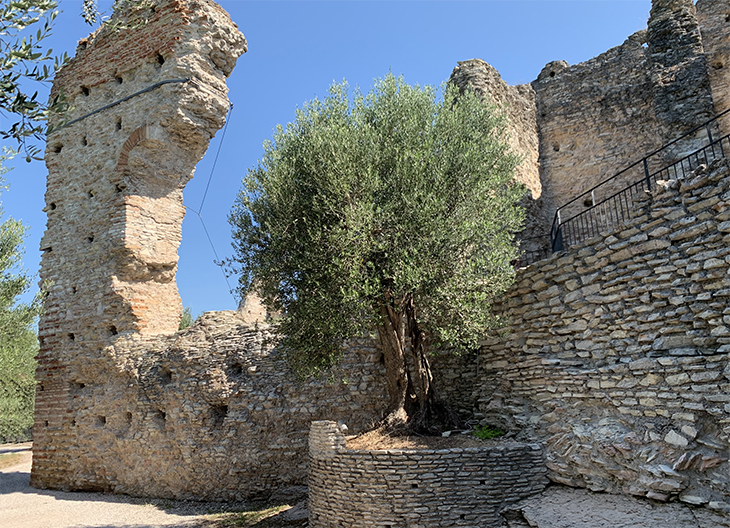 Near the entrance to the villa is the remnant of a foundation wall called the grande pilone, and beyond that is the “Hall of Giants”. 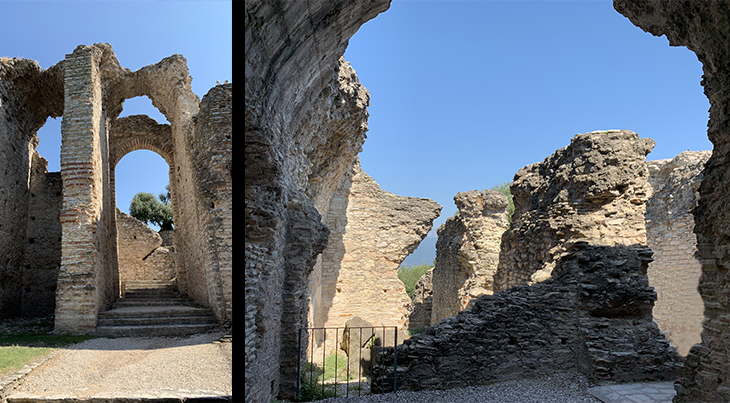 You can walk through the entire remains of the villa, which had many public rooms, private bedrooms, patios, gardens, etc.

All of the statues and decorations which would have adorned the villa and grounds were removed over the succeeding centuries. 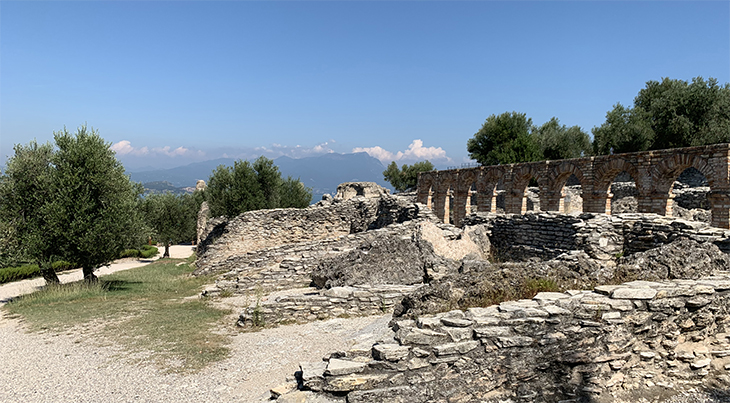 The Archaelogical Museum of Sirmione brochure says the cryptoportico above would mostly likely have been a service passage to transport firewood and coal to the villa’s huge thermal bath system and large pool, which would have been heated by a boiler circulating hot air around the sides and under the floor of the pool. A heated pool, a modern-day luxury enjoyed by vacationing Romans in 100-200 AD.

The name “Grottoes of Catullus” dates to the 15th century. It’s possible but unlikely that this was the villa belonging to the poet Catullus, whose family had a villa in Sirmione (possibly this same villa but that’s impossible to prove), paid homage to Sirmione in his poetry before he died in 54 BC. The villa could have belonged to any wealthy family of the time, as it was a popular vacation spot for land-locked Verona inhabitants. 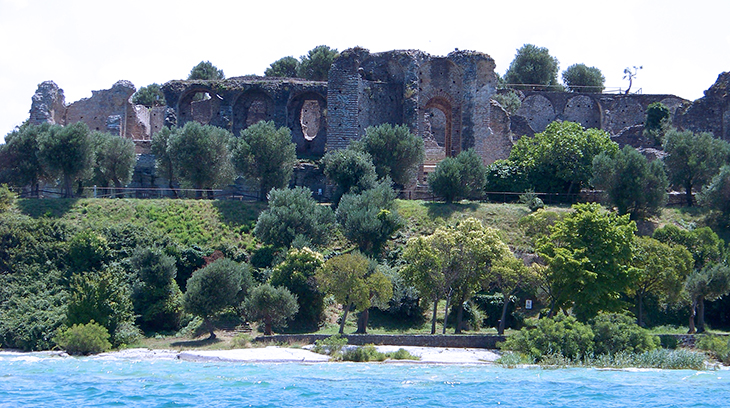 Other highlights of our bus tour include Burano and the Venetian Lagoon, seeing the magnificent Dolomites, a prosecco wine tasting, and visiting the Borromeo Summer Palace “Isola Bella” , and Venice landmarks such as St. Mark’s Square.

If you enjoyed this article you may also like my account of our time in Italy before the tour began. We toured Florence, the Pitti Palace, Cinque Terre and Monterosso al Mare – all unique experiences that helped make this a dream vacation to Italy.

Movies filmed at Sirmione, Scaligero Castle, and / or Lake Garda

The Gamble / La Partita (1988), a historical comedy starring Matthew Modine and Jennifer Beals. The Gamble was filmed at Notre Dame in Paris (France), and several locations in Northern Italy including Sirmione, Castellaro Lagusello, and Mantua in Lombardy; Verona, and Venice.

*This article is for general informational purposes only. 50+ World does endorse any providers, nor does it receive remuneration from them.*

**Unless indicated otherwise, photographs & text in this article are © 2019 Anita Hamilton. All rights reserved. Do not download or reproduce without written permission. Other images are either presumed to be in the public domain and/or creative commons licensed and sourced via Wikimedia Commons or Flickr**