The Medici family had several palazzos in the heart of old Florence during their almost 200-year reign over the city. Today you can tour the magnificently decorated Pitti Palace and Boboli Gardens, and see beautifully preserved examples of Renaissance artworks, and other treasures gathered by the Medici family and subsequent Florentine rulers.

Florence banker Luca Pitti began building Palazzo Pitti at the bottom of the Boboli hill, in the mid-1400s. The palace was bought by Cosimo I de’ Medici (the first Medici Grand Duke of Tuscany) and his wife Eleanor of Toledo, and it became the private residence of the Medici Grand Dukes.

In the Pitti Palace Palatine Gallery, the palazzo ceilings are themselves incredible works of art. In addition to the ceiling frescos, each room has paintings, sculptures, and more by Renaissance artists such Raphael, Caravaggio, Titian, Rubens, and others. 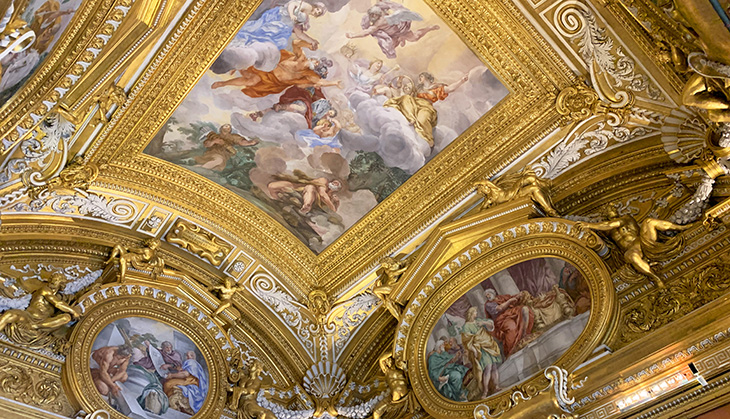 In addition to the magnificent ceiling fresco in the Saturn Room by Pietro da Cortona, several paintings by Raphael adorn the walls.

The decoration of the rooms includes likenesses of Medici family members, biblical, and mythological figures. Visitors waited in the Venus, Apollo, Mars, or Saturn Rooms to be received by the Medici Grand Duke.

Da Cortona created elaborate ceiling frescos and decorations for each planetary room, beginning with the Hall of Venus. The fresco below was completed between 1641-1642. 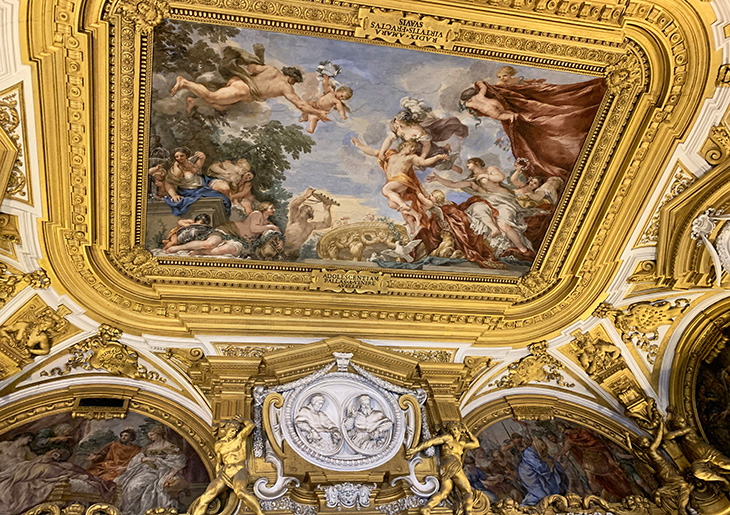 (Venus Room, Minerva Tearing a Medici Prince From the Arms of Venus)

Notice that below the bottom of the Minerva ceiling fresco above, the left lunette (half-circle) painting of the Story of Antiochus and Stratonice, has a window opening between the top stuccoes. This opening allowed the Medici Duke to listen/observe what was said or done in the waiting room. 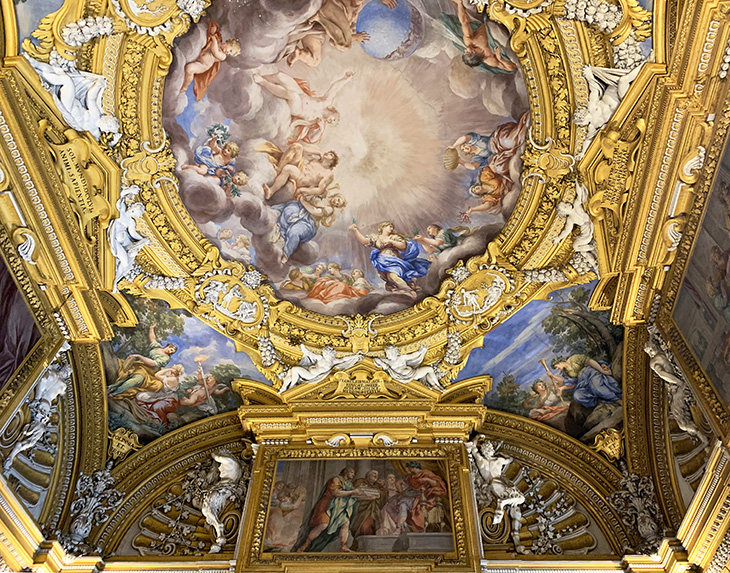 Pietro da Cortona painted the main centre ceiling fresco “Medici Prince Brought Before Apollo By Fame” in 1647 for the Apollo Room, and designed the decorations.

His student Ciro Ferri completed the decorations and painted the semi-circular frescos (lunettes) in the Apollo Room between 1659-1661.

The Throne Room /  Jupiter Room of the Pitti Palace is where visitors would meet with the Medici Grand Duke. 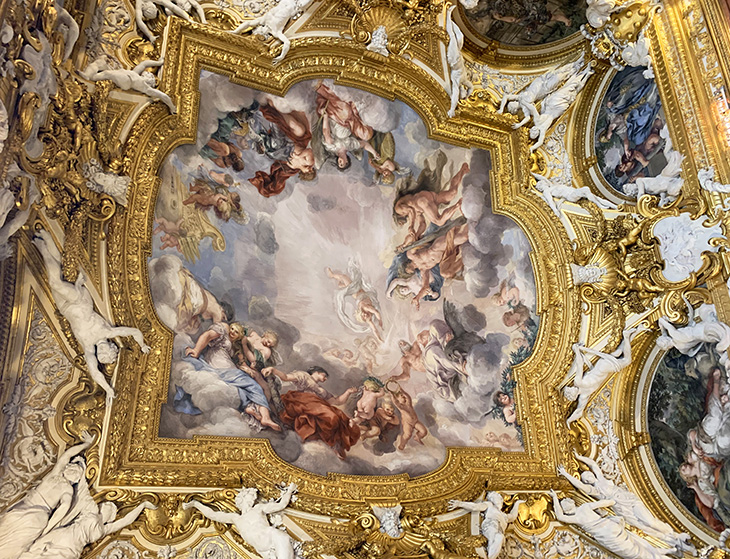 The stunning “Glorification of Cosimo I de’ Medici” ceiling fresco above, painted by Da Pietro and completed by Ferri between 1642-1646, is a fitting decoration for the throne room. Paintings by Rubens, Raphael, and Bronzino are on the walls of the Jupiter Room.

Renaissance Flemish painter Peter Paul Rubens painting “The Four Philosophers” hangs on the wall of the Mars Room in the Pitti Palace. It’s a 1611-1612 self-portrait of Rubens (seated on the left), his brother Phillippus (standing behind him), and two friends. Phillippus was a student of Flemish teacher Justus Lipsius (second from right), as was Jan van der Wouvere / Joannes Woverius (far right). 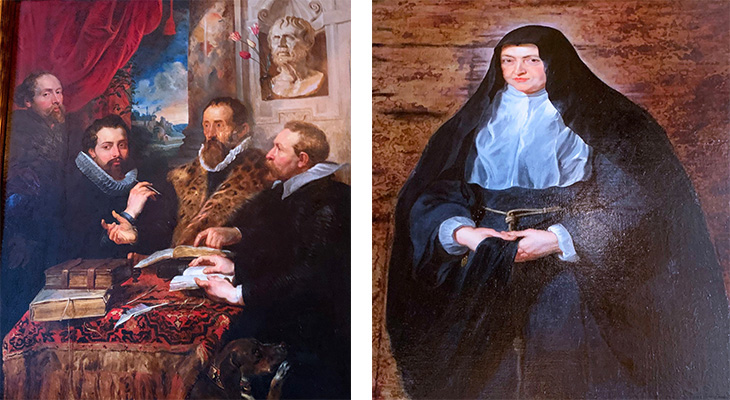 (Rubens, “The Four Philosophers” and “Portrait of Infanta Clara Eugenia”)

Elsewhere in the Palatine Gallery is Rubens’ 1620 “Portrait of Infanta Clara Eugenia“, Governess of the Netherlands.

After the Medici family bloodline ended in 1737, the House of Habsburg-Lorraine occupied Pitti Palace and ruled Florence until 1861.

The ceiling of the Iliad Room in the Pitti Palace is decorated with the “Olympus” fresco by Luigi Sabatelli completed between 1819-1825. It depicts Zeus and ancients gods on Mount Olympus. 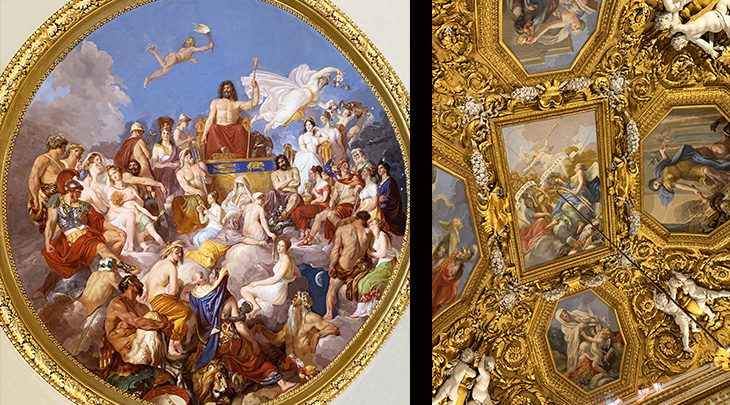 (Pitti Palace Ceiling Frescos “Olympus” and “The Strength of Victory”)

“The Strength of Victory” ceiling fresco decorates another room in the Palantine Gallery of the Pitti Palace.

When General Napoleon Bonaparte came to power in Northern Italy in 1805, he appointed his sister Elisa Baciocchi as the Grand Duchess of Tuscany. What had been a guard room of the palazzo under the Medici family, was renovated between 1811-1813 under her direction to become a reception area eventually known as the Hercules Room, for her private apartments. 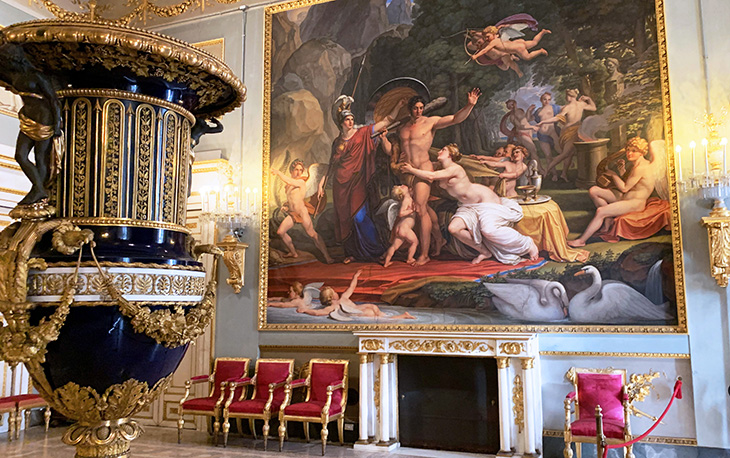 (“Hercules at the Crossroads” 1828 Painting by Pietro Benvenuti)

After Napoleon’s Kingdom of Italy was dismantled, Ferdinando III di Lorena took over the throne of Tuscany in 1817. He commissioned neoclassicsm artist Pietro Benvenuti to decorate the walls and ceiling of this reception room with paintings about Hercules. 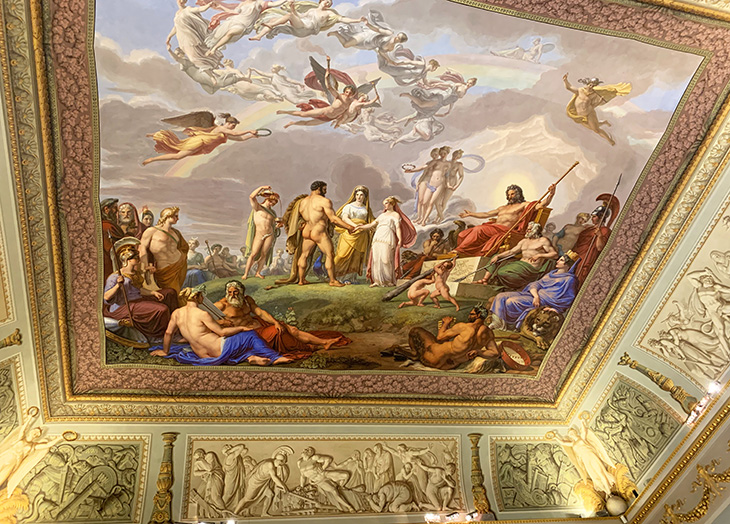 (“The Wedding of Hercules and Ebe” Ceiling Fresco by Pietro Benvenuti)

The Sala della guardia / Guard Room, was another entry room to the rest of the royal apartments, before it was redecorated in the mid-1800s to serve as a reception room for the then-ruling Hapsburg-Lorraine Grand Duke’s family. It’s known as the Green Room because of the green silk wall coverings, curtains, and upholstery from that era. 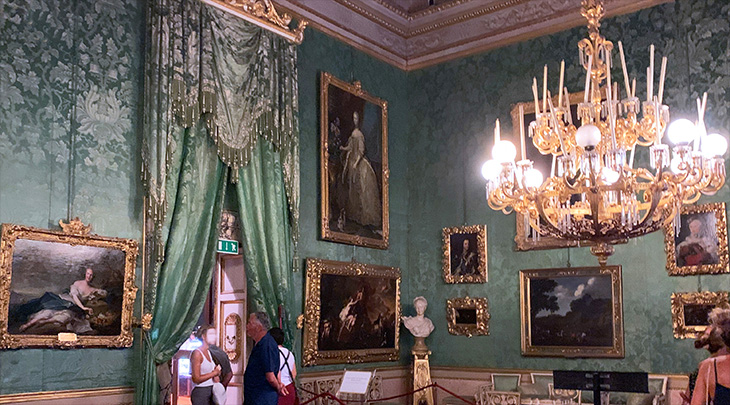 Paintings by Caravaggio and of French royalty hang on the walls of the Green Room, courtesy of the later Savoyard Kings personal collection. The Savoy family (Victor Emmanuel II, Umberto I, & Victor Emmanuel III) became the Kings of a unified Italy in 1861, and occupied Pitti Palace until it was given to the government in 1911.

The Medici’s, Habsburgs-Lorraines, and Savoyards were all collectors and patrons of artists, painters and sculptors. Several sculptures by Florentine Renaissance painter and sculptor Baccio Badinelli can be found throughout the palazzo and in Boboli Gardens. 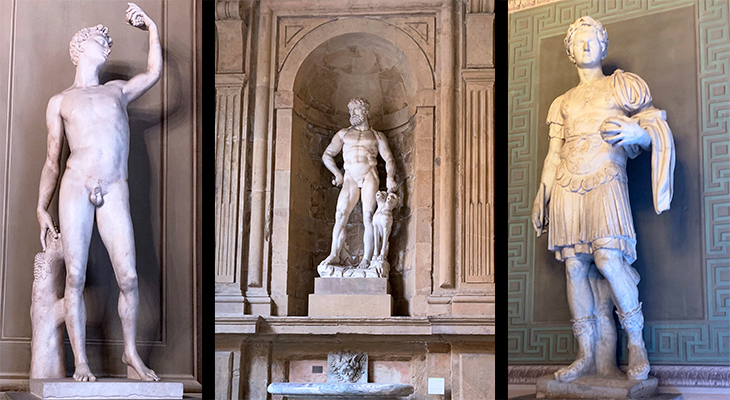 The formal Gallery of Statues in Pitti Palace is home to an impressive collection of sculptures, some of which date back to ancient Greco-Roman times.

Below, a bust of Early Roman Emperor Antoninus Pius (born 86 AD – died 161 AD), and the head of Achilles / Doryphoros circa early 120s AD (mounted on a 1500s bust) flank a standing sculpture in the Gallery of Statues; on the far right is a Roman Imperial Age sculpture of a faun with panther. 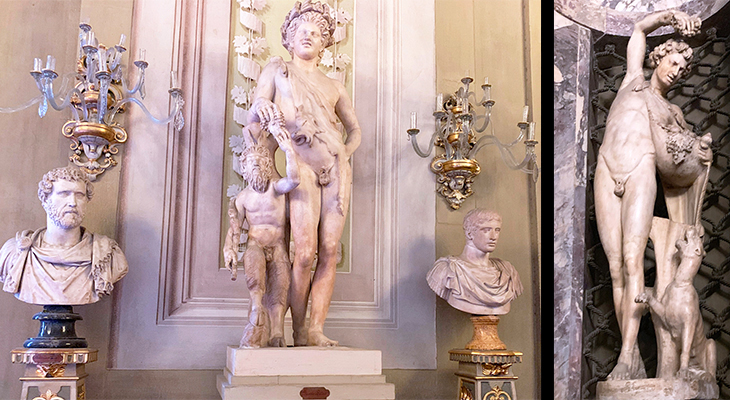 Two more busts sit between the statues of a Greco-Roman athlete and the helmeted copy of a statue of the Giustiniani Athena (from mid-100s AD), in the Pitti Palace Sculpture Gallery. 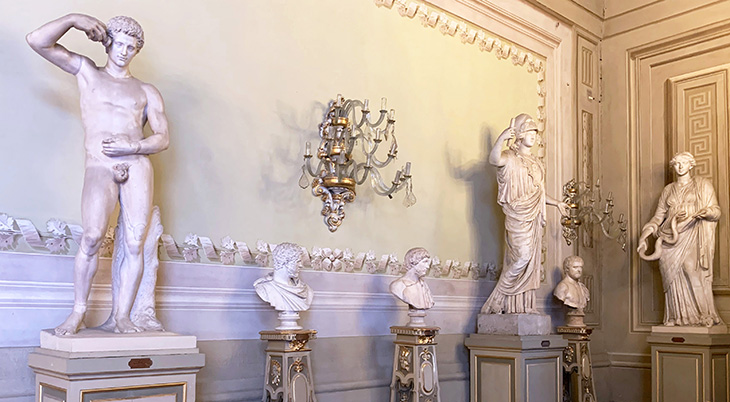 (Giustiniani Athena and other Sculptures and Busts)

Cosimo I de Medici had established the Medici Tapestry Manufactory in Florence in 1545. In 1673 his great-grandson, Grand Duke Ferdinando II de’ Medici (born 1610 – died 1670), commissioned a series of massive wool and silk tapestries woven at the Manufactory, to glorify Cosimo I’s accomplishments and celebrate significant events in his life. 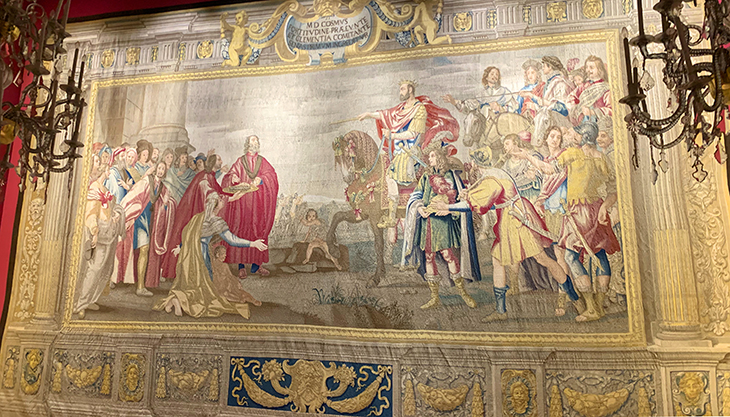 The tapestry above depicts Cosimo I de’ Medici taking possession of Siena after a 15-month siege ended in 1555.

Below on the left, “Cosimo I Receives the Investiture of Grand Master of the Order of St. Stephen“. The Order of St. Stephen was a Tuscan military order / Roman Catholic society of knights created by Cosimo I in the mid-1500s to fight Mediterranean Sea pirates and Ottoman Turks; it was dissolved in 1859. 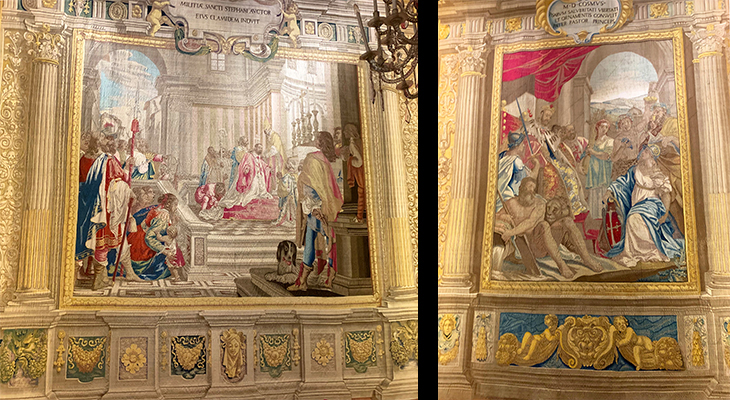 Above right, “Cosimo I Reclaims the Countryside Around Pisa“, acknowledges Cosimo I’s efforts to revitalize nearby Pisa with urban and rural projects (building canals and draining swamps).

*All of the above photographs were taken at the Pitti Palace, Florence, Italy and are © 2019 Anita Hamilton. All rights reserved. Do not download or reproduce without written permission.*

The exterior front courtyard of Pitti Palace today is virtually unchanged from the scene below almost 400 years ago, painted in the mid-17th century. 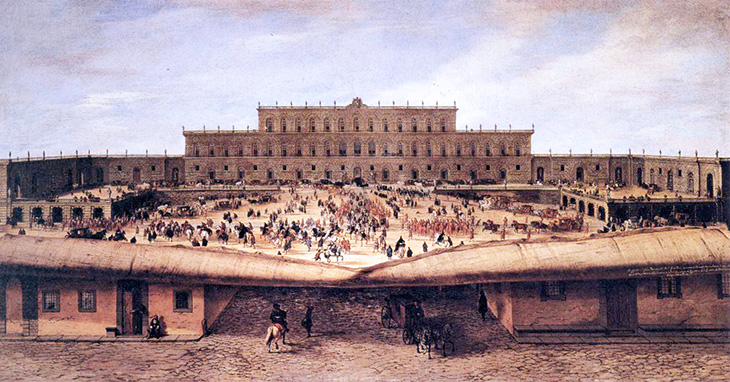 Although the exterior front of Palazzo Pitti is rather institutional in appearance, the inside, and the back courtyard with views of Boboli Gardens, are quite elaborate. 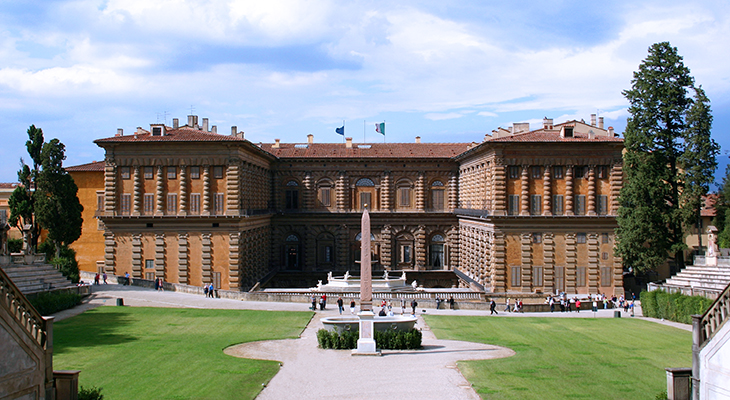 Boboli Gardens were designed for Cosimo I de’ Medici’s wife Eleonora di Toledo in the  opened to the public in 1766. 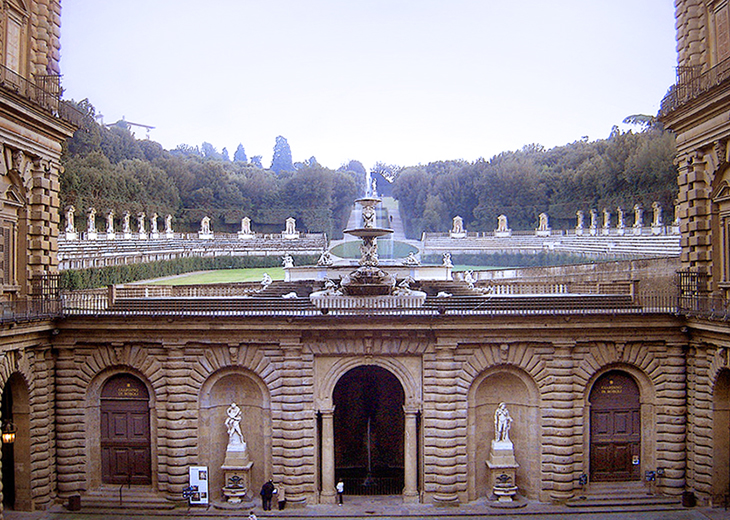 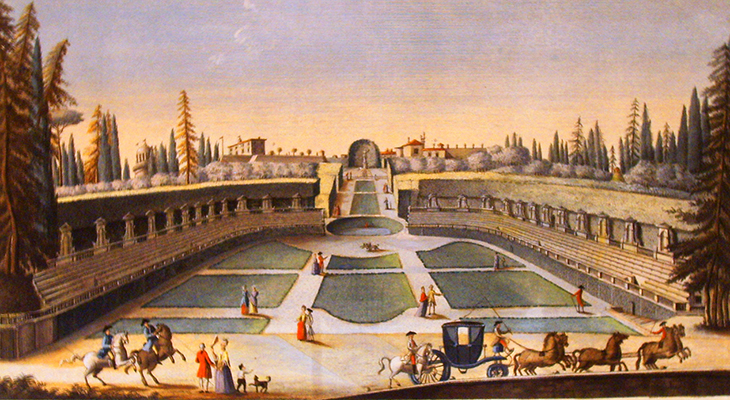 In the background of this 18th century painting of the amphitheatre of Boboli Gardens, you can see Forte di Belvedere, designed and built by Bernardo Buontalento between 1590-1595.

Buontalenti was a multi-talented sculptor/painter/architect/mathematician & mechanic. He worked for the Medici family for most of his life, and in addition to designing several elements of Boboli Gardens and Pitti Palace, he designed costumes, arranged fireworks displays, and built other theaters for Medici events in Florence. 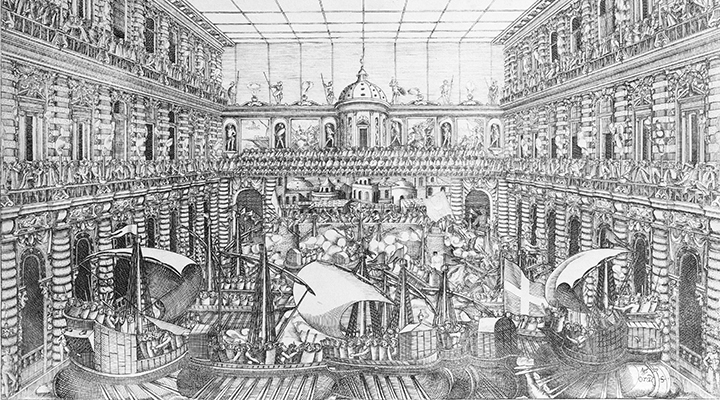 The Naval Battle scene depicted above took place in the Pitti Palace courtyard, which was transformed by Bernardo Buontalenti and Bernardo delle Girandole in 1589 as a theatre for festivities to celebrate the marriage of Arch Duke Ferdinand I de’ Medici and Christine of Lorraine. 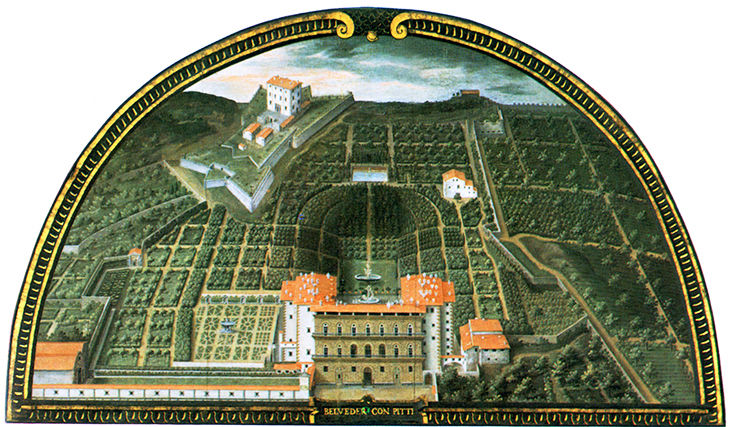 If you’d like to read more about Florence and the Medici’s, you may also like Buona Sera, Firenze: Touring Florence. Or if medieval palazzos and the movies filmed in them interest you, check out Venetian Palazzos in Movies and Plays.

***This article is for general informational purposes only. 50+ World does endorse these providers, nor does it receive remuneration from them.***

****All text in this article, and photographs as noted above, are © 2019 Anita Hamilton. All rights reserved. Do not download or reproduce without written permission.****