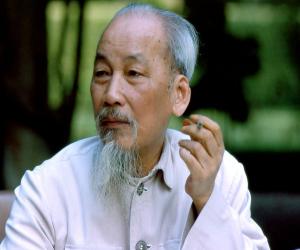 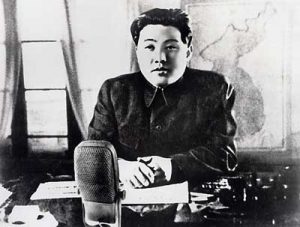 During WWII, Korea had been occupied by the Soviets in the north and the U. S. in the south; when the war ended, the USA and Russia divided Korea into North and South. Former Korean communist guerilla fighter Kim Il-sung, who had been exiled for over 22 years in China, was returned to North Korea by the Soviets in September 1945. On September 9th 1945, Kim Il-sung (left photo: cpcml.ca) was declared the new Democratic People’s Republic of Korea (North Korea) leader.

Low-level Russian cipher clerk Igor Gouzenko was stationed in the Soviet embassy in Ottawa, Ontario and tried to defect on September 5, 1945 with a briefcase full of code books and documents. Gouzenko was turned away by the Royal Canadian Mounted Police and the Ottawa Journal newspaper staff on duty that night, and went back to his apartment building. From a neighbour’s apartment across the hall, he watched through a keyhole while his apartment was ransacked by Soviet Union agents, who left when the Ottawa police arrived. (Photo below: boldandmighty.com)

The RCMP finally picked Igor Gouzenko up the following day, heralding the beginning of the Cold War with the exposure of Soviet spying in Canada and the United States under the direction of Joseph Stalin.

As a resident, Dutch doctor William J. Kolff was inspired by one of his first patients who was dying from renal failure (chronic kidney disease), to research artificial replacements for renal function. Despite the onset of World War II and his participation in the Dutch resistance against German occupation there, Kolff continued his research and had developed an artificial kidney machine by 1943. In September 1945 Dr. Kolff performed the world’s first successful kidney dialysis treatment using his machine on a rumoured Nazi collaborator. Left photo: Dr. William J. Kolff & wife Janke – Academy of Achievement

Since then, dialysis treatments have saved the lives of millions of people around the world that suffer from kidney disease, and forever changing – for the better – the lives of the emerging and now aging baby boomer population.