By the start of 1945, World War II had been going on since 1939. Canada’s 10th and longest-serving Prime Minister, William Lyon MacKenzie King, was serving his 5th and final term as Prime Minister; he was by then a 70-year-old septuagenarian senior citizen. The 32nd President of the United States of America, Franklin Delano Roosevelt was inaugurated for his 4th term in office on January 20, 1945. Seniors may remember Roosevelt’s inaugural address, which focused on a message of peace for the future based on learning from the past:

“We have learned that we cannot live alone, at peace; that our own well-being is dependent on the well-being of other nations far away…We can gain no lasting peace if we approach it with suspicion and mistrust or with fear.”

On January 30, 1945, American soldiers combined with Filipino guerrillas for The Great Raid, a rescue of over 500 prisoners (Americans and Allied soldiers and civilians) from a World War II Japanese POW (prisoner of war) camp near Cabantuan City in the Philippines. Many of the camp’s prisoners had been held there for almost 3 years, since the Battle of Bataan in April 1942.

Today baby boomers and seniors visiting Cabantuan City will discover why it is called the “Tricycle Capital of the Philippines” – there are more than 30,000 tricycles in use by rental/tour operators and private owners. 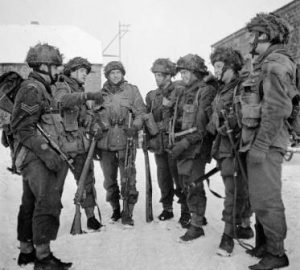 Canada’s first conscripted (compulsory enrollment) soldiers began arriving in Britain in January 1945. 13,000 conscripted Canadian soldiers were sent overseas in 1945 but only a few thousand saw combat before the WWII ended. Between 1939 and 1945, 1.1 million Canadians served on active duty during World War II, primarily in the Atlantic, Netherlands, England, France, and Italy. Right, Paratroopers of the 1st Canadian Parachute Battalion preparing for a patrol, Bande, Belgium. Photo: Library and Archives Canada, MIKAN No. 3526680