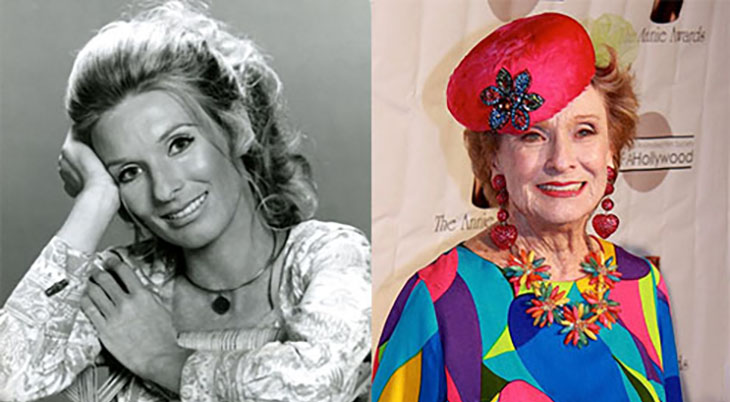 Young Cloris studied piano beginning at age 7 and in her Cloris: My Autobiography (2009) written by Cloris Leachman with George Englund, her love of music continued through her life.

In 1946, Cloris won the Miss Chicago Pageant and went on to compete in the Miss America pageant. Scholarship in hand, Leachman moved to New York City to pursue a career in acting. 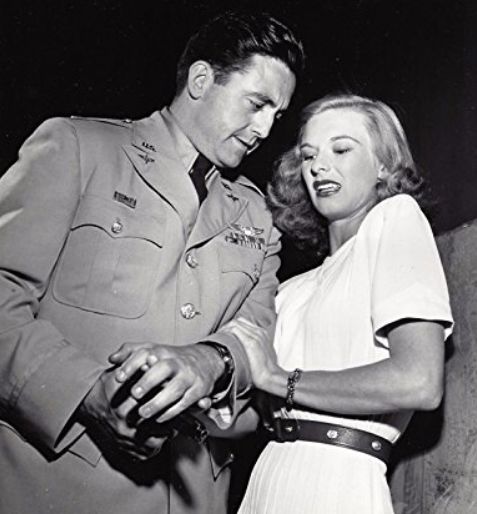 Cloris Leachman joined the 1947 inaugural class of the newly formed Actors Studio in New York City with teacher Elia Kazan, along with fellow students Marlon Brando, Montgomery Clift, Julie Harris and others. In her autobiography Cloris said about Marlon Brando:

“Marlon asked me out several times, but I didn’t go. I felt he’d want to take me to his apartment and probably it wouldn’t be clean, and I’d find it disgusting. Also, he was after every girl that twitched, and I didn’t want to be one of the multitude.”

Leachman was soon working professionally, with small roles in television, the movies and on stage. She met wealthy, older, and married father of one, Hyman Sobiloff in 1947 and their affair lasted several years. Hy’s wife was schizophrenic (according to Cloris: My Auotobiography) and in and out of hospital. Hy Sobiloff himself was a businessman, filmmaker, philanthropist, poet…and a heavy drinker. Cloris broke up with Hy in early 1950, after she had begun appearing in the Broadway play As You Like It (1950) with Katharine Hepburn and a lesser-known actress called Pat (Patsy) Englund. Hy Sobiloff died of a heart attack in 1970.

One night after a performance of As You Like It, Cloris met Patsy’s brother, actor George Englund (the same age as Cloris); George and Cloris began a romance. They appeared together in the Broadway play Lo and Behold! (December 1951-January 1952), directed by Burgess Meredith.

Cloris Leachman and George Englund were married in North Haven, Connecticut on April 19, 1953; she was pregnant with their son Adam Englund, who was born in October 1953 in New York.

In April the next year, Cloris Leachman’s first big-screen movie, the dark thriller Kiss Me Deadly (1955) was released. Two months later their second son Bryan Englund was born (June, 1955). In the movie trailer for Kiss Me Deadly, below courtesy of Criterion Collection, Cloris Leachman runs down the road at night in terror.

Later that summer, Cloris Leachman introduced Marlon Brando to her husband at a party at the home of Burgess Meredith, and the two men (and their families) became lifelong friends and eventual business partners in a movie production business.

Below, on the set of The Ugly American (1963) from left, cinematographer Clifford Stine, Leachman’s husband director-producer George Englund, and actors Marlon Brando, and Sandra Church. 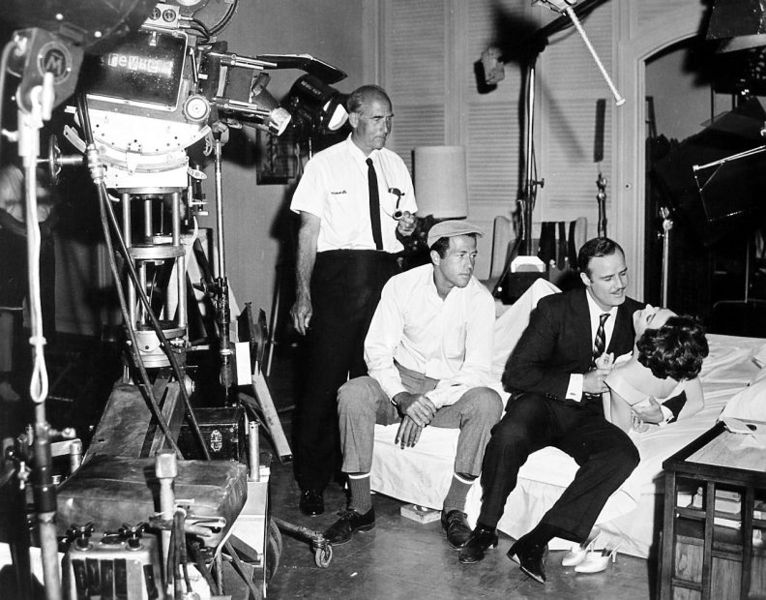 Leachman and her family would visit the Brando’s on Marlon’s Tahiatian atoll, Tetiaroa. As a couple, George Englund and Cloris Leachman were also friends with Steve McQueen and his first wife Neile, Paul Newman and Joann Woodward, and were neighbours to Judy Garland and Sid Luft.

By the end of 1958, Cloris Leachman had another big-screen movie under her belt – The Rack (1956) with Paul Newman – and had landed a starring role in television’s Lassie series for the 1957-1958 season. 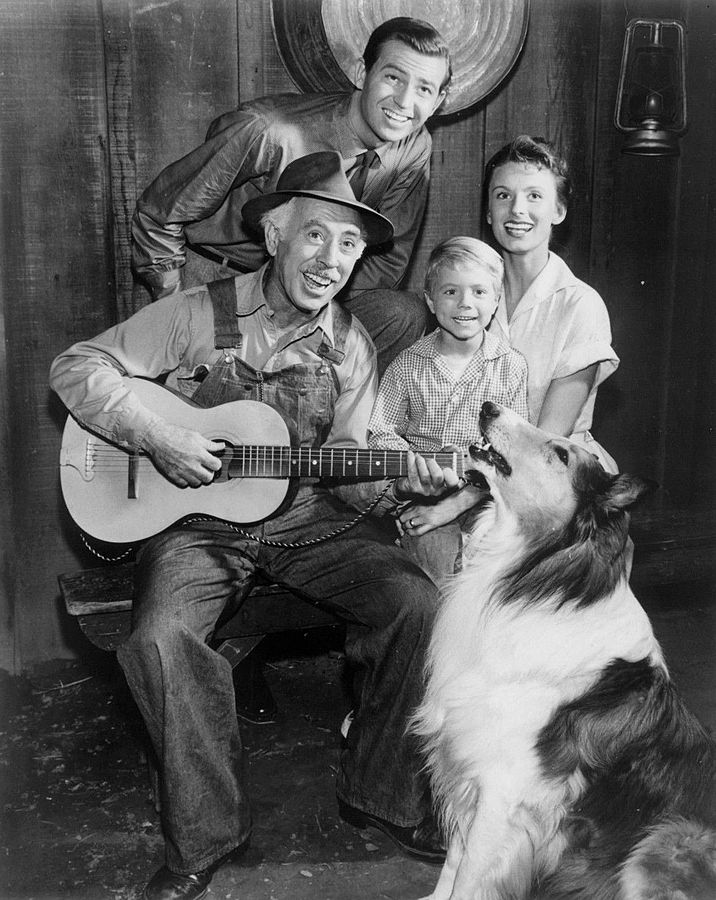 Off-screen, Cloris Leachman’s private life was a mix of ups and downs; her husband George (now a producer with MGM) was in the midst of an almost 2-year affair with actress Joan Collins – but he was also still sleeping with Cloris when he was at home.

Cloris Leachman has said that while she was in New York in the cast of the play A Touch of the Poet in 1959, Joan Collins called her to tell her she was having an affair with George in Los Angeles.

For her part, Joan Collins has said that she grew tired of George promising to divorce Cloris but never following through, and Collins finally left him for Warren Beatty.

During the 1960’s, Cloris Leachman continued acting while raising her family and embracing a vegetarian lifestyle. She had small, episodic roles in over 20 different television series, and appeared in two more movies, including a part in Butch Cassidy and the Sundance Kid with friend Paul Newman, and Robert Redford. She was a guest star on many television series throughout the 1950s and 60s, including Boris Karloff’s Thriller. 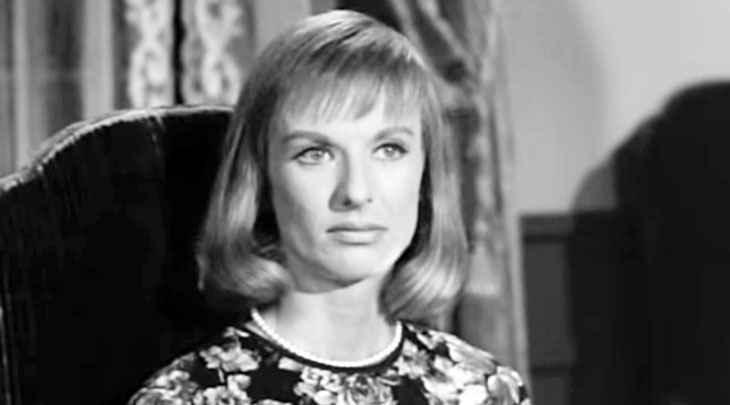 During this time Cloris and George Englund had two more children – son Morgan Englund (b. August 1963), and daughter Dinah Englund (b. January, 1966).

Cloris Leachman’s career blossomed in the 1970’s with no less than 17 big-screen and 21 made-for-TV movies released.

Although she was once again separated from George Englund, Cloris Leachman brought him with her to the 1972 Academy Awards ceremony. Below, Leachman with her fellow Oscar-winners, actors Ben Johnson and Gene Hackman, and seated, director-actor Charlie Chaplin with his wife Oona O’Neil Chaplin. 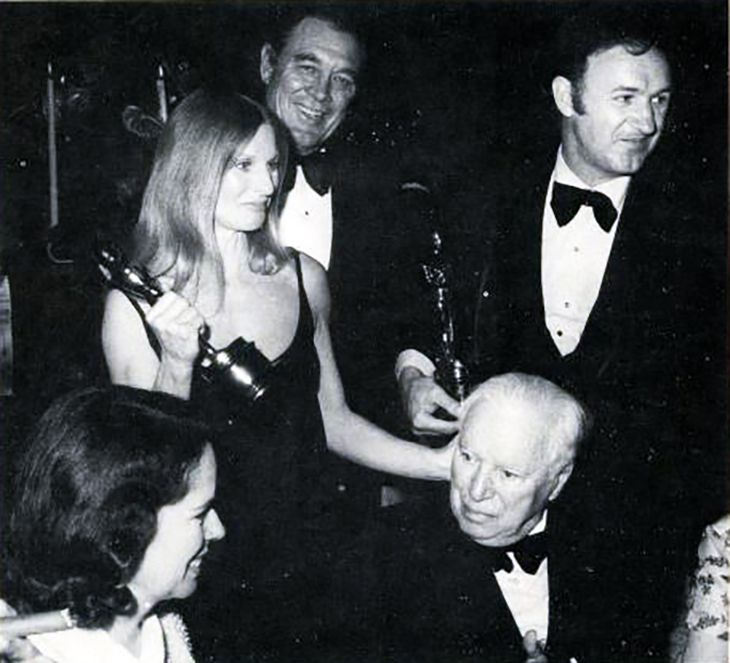 Below, Raquel Welch and Gene Hackman present the Best Supporting Actress Award at the 1972 Academy Awards in a classic Oscar video. Fellow nominees Barbara Harris and Ann-Margret, and Cloris Leachman sitting beside George Englund, are shown sitting in the audience before Cloris is announced as the winner and accepts the Academy Award.

Before the 70s had ended, Cloris Leachman also starred in the first two of three movies she made with director Mel Brooks – playing Frau Blucher in the hit comedy Young Frankenstein (1974) with Gene Wilder, and Nurse Diesel in High Anxiety (1977).

Below, Betty White as Sue Ann Nivens & Cloris Leachman as Phyllis Lindstrom on The Mary Tyler Moore Show in 1973. 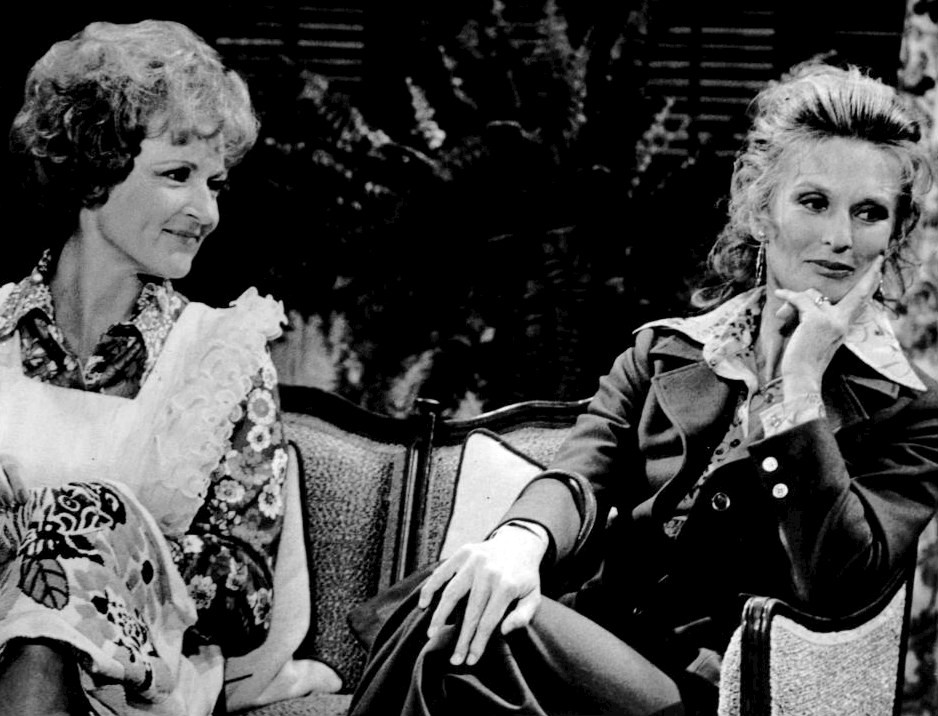 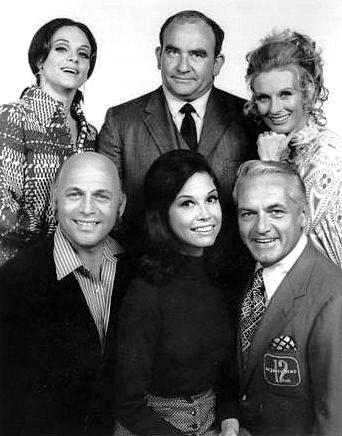 Leachman carried over her Phyllis Lindstrom character for a few crossover episodes on Rhoda (1974), and then starred in her own television series as she entered her 50+ years, Phyllis (1975-1977).

During different separations from George Englund, Cloris Leachman had a few flings herself – notably with Gene Hackman, and also with Bobby Darin. Cloris had first met Darin in 1968 and then filmed the horror movie Run, Stranger, Run (also titled Happy Mother’s Day, Love George) (1973) with Darin in Nova Scotia.

Leachman guest-starred in an episode of The Bobby Darin Amusement Company (1972) television series as well.

As the 70’s came to a close, so too did Leachman’s 26-year marriage to George Englund; they divorced in 1979. Although Englund married again in 1980 to Bonnie Graves, Cloris Leachman has remained single; she and George are still close friends. Englund helped her write her 2009 autobiography and wrote and directed her 2010 Las Vegas one-woman show.

Cloris Leachman’s acting pace didn’t slow down during the 1980’s and 1990’s as she became first a new senior citizen, then a septuagenarian. She appeared in 45 movies including 25 feature films such as History of the World, Part I (1981) with director Mel Brooks, and Prancer (1989).

A supporter of PETA and a devout vegetarian, 82-year-old Cloris Leachman wore a dress made of red cabbage and lettuce in a 2008 Times Square ad to support the organization.

Some of Cloris Leachman’s most memorable roles upon becoming a senior citizen were as a grandmother – in The Beverly Hillbillies (1993) she played Granny, and in Now and Then (1995) she played Grandma Albertson. 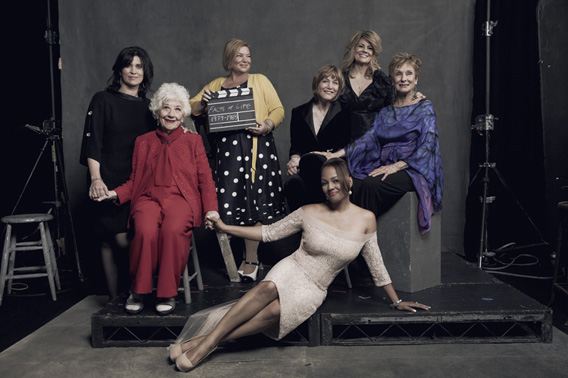 Several other short-lived TV sitcoms that Cloris Leachman was a regular on include The Nutt House (1989), and Walter & Emily (1991-1992). Somewhere she also found time to return to performing on stage as well.

Bryan Englund, Cloris Leachman’s second son, died in February 1986, a blow that the very family-oriented and now happy grandmother Leachman found difficult to overcome. Her other children and some grandchildren (ie Morgan Englund) have also acted or been in entertainment.

Leachman was a regular on the sitcom The Ellen Show (2001-2002). Upon becoming an octogenarian senior, she could be seen in The Women (2008), You Again (2010) playing a rival grandma to Betty White‘s characer; and she voiced the role of Gran in The Croods (2013) animated movie. 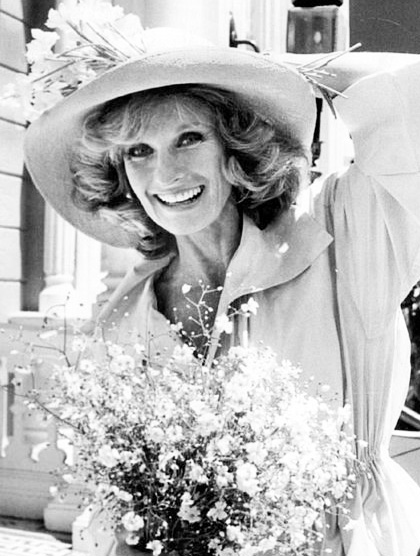 Retirement doesn’t seem to be in her vocabulary despite her advancing years.

Cloris Leachman has credited her vegetarian lifestyle for her healthy aging, and told InTouch magazine in 2009 about her commitment to living healthy and naturally.

Currently in 2016, nonagenarian Cloris Leachman is filming the movie So B. It, and has been tapped for other independent features and television roles.

She’s a great-grandmother now and showing no signs of slowing down as she ages.