After living together for two years, Francine Racette and Donald Sutherland had their first son, Roeg Sutherland (b. Feb 1974 in Los Angeles, California). According to Time Magazine, Sutherland helped deliver the baby and took paternity leave – trailblazing for fathers in the early 1970’s. Roeg is named for Donald’s Don’t Look Now (1973) director Nicolas Roeg. Today in 2016 Roeg Sutherland is an agent with Creative Artists Agency (CAA).

In Fellini’s Casanova (Il Casanova di Federico Fellini) (1976), Donald Sutherland starred as the 18th century womanizer and sexual adventurer Giacomo Casanova. Although Fellini’s Casanova was critically acclaimed, director Federico Fellini said he didn’t like his leading man, and baby boomer audiences didn’t love the movie. Sutherland, for his part, has said he had long been an admirer of Fellini’s work, despite having to shave his forehead and eyebrows at Fellini’s direction.

Francine Racette and Donald Sutherland’s second son, Rossif Sutherland, was born in September 1978 in Vancouver, B.C. Rossif is named for French director Frédéric Rossif, who had directed Racette in the movie Aussi loin que l’amour (As Far as Love Can Go) (1971). Rossif Sutherland has been acting in movies and on television since 2003.

Tim Matheson would reunite with Sutherland in the TV movie Quicksand: No Escape (1992); and in The Great Train Robbery (1979) starring Donald Sutherland, Sean Connery, and Lesley-Anne Down, Karen Allen appeared in an un-credited role.

Sutherland was made an Officer of the Order of Canada in 1978. That same year, baby boomer fans loved him in the horror movie Invasion of the Body Snatchers (1978). Sutherland was critically acclaimed in Invasion of the Body Snatchers, and starred opposite Brooke Adams, Leonard Nimoy, and Jeff Goldblum. The following year Sutherland co-starred with Brooke Adams again in the Canadian comedy heist movie A Man, A Woman, and A Bank (1979).

As the 1970’s came to a close, Christopher Plummer and Donald Sutherland’s third movie together was another British-Canadian thriller, Murder by Decree (1979).

Once again reuniting with a former co-star (Chief Dan George from Alien Thunder), Sutherland co-starred with Suzanne Somers in Nothing Personal (1980). In the Canadian movie Threshold (1981), he appeared with Jeff Goldblum, his co-star from Invasion of the Body Snatchers, and won a Canadian Genie Award for his performance. 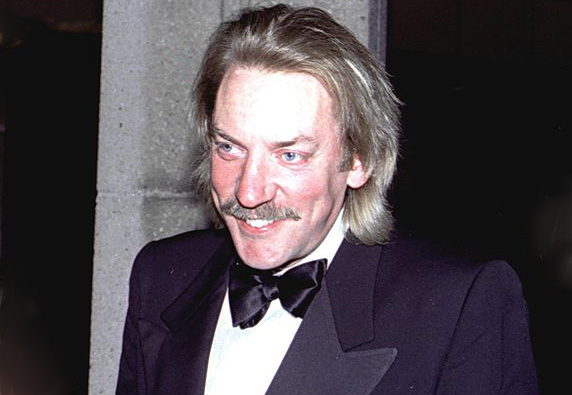 In his 50+ years, the film adaptation of Agatha Christie’s mystery Ordeal by Innocence (1984) had Donald Sutherland co-starring with Faye Dunaway. Ordeal by Innocence was Sutherland’s fourth and last movie (so far) with Christopher Plummer, and his first experience working with actor Ian McShane. Twenty-six years later, Ian McShane & Donald Sutherland worked together again in the TV mini-series The Pillars of the Earth (2010).

The prison action movie Lock Up (1989) starred Sylvester Stallone as a prisoner, and an older Donald Sutherland as his warden in their second movie together.

Both Sylvester Stallone and Sutherland received the dubious distinction of being nominated for Razzie Awards for Worst Acting for their performances in Lock Up. Sutherland wrapped up the 1970’s and 1980’s decades with another 50 film credits.