Stan Jones & the Legend of Ghost Riders in the Sky

By all accounts, one-time Forest Ranger, firefighter, rodeo cowboy, songwriter, singer, and actor Stan Jones was a born raconteur. He turned the rich fodder of his life into stories and songs, one of them being his enduring country-folk tune Ghost Riders in the Sky. 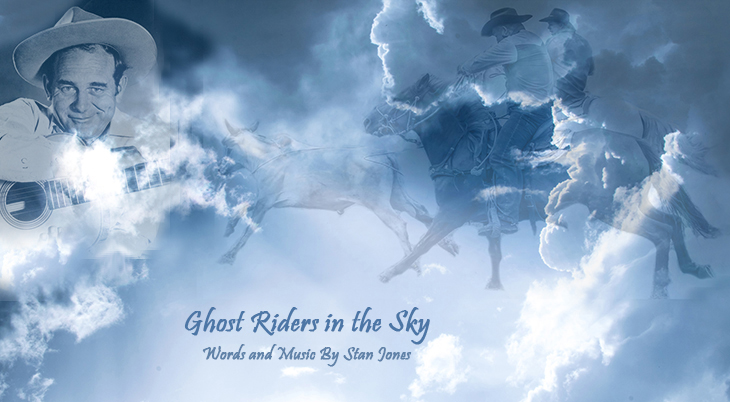 Stanley Davis Jones was born June 5, 1919 in Douglas, Arizona, and grew up in that state. He was a rodeo rider in his youth, earned his master’s degree from U.C. Berkeley in zoology, and served in the U.S. Navy in the early 1940s.

There are several versions of what inspired Stan Jones’ lyrics for Ghost Riders in the Sky. One version of how his most famous song came about is that he was told of the legend of spirits in the sky resembling ghost riders, by an old Native American in Arizona (where he grew up).

Another take on it by It’s the Cowboy Way!: The Amazing True Adventures of Riders in the Sky (2004) author Don Cusic, is this:

“An old cowboy, Cap Watts, and a young cowpoke, Stan Jones, were working. As a storm began to develop, the moving clouds looked like figures riding through the sky, and Watts yelled “ghost riders”. Later, Watts told Jones the story of “ghost riders” who tried to “catch the devil’s herd” when cold air and hot air currents collide, which often results in tornadoes. Jones remembered the story and later wrote the song.”

By 1945 Stan Jones had discovered a calling as a Forest Ranger with the National Park Service, eventually being assigned to work as a Park Ranger in Death Valley.

The following year, 3 motion picture companies converged on Death Valley, and Jones was among the Rangers assigned by the Park Service to be on site when they were filming. The first of the three movies to be filmed in Death Valley around May 1948, was a biggie:

3 Godfathers (1948), a classic western film directed and produced by John Ford. The film stars John Wayne, Pedro Armendáriz, Harry Carey Jr., Ward Bond, Mae Marsh, and Mildred Natwick, with Ben Johnson in a small role as the member of a posse. Stan Jones is listed as an uncredited technical advisor on 3 Godfathers, and Death Valley was one several of the film locations for that movie. 3 Godfathers premiered in December 1948 but wasn’t released until January 1949.

Some tales have it that it was Stan Jones’ connection to John Ford, and singing his Ghost Riders on the Sky song around the campfire to the cast and crew of 3 Godfathers, that lead to him getting the song recorded and published.

The second movie to use Death Valley as a film location that year and to have Jones assigned to it, was the modern film-noir western The Walking Hills (1949).

The Walking Hills stars Randolph Scott, Ella Raines, Edgar Buchanan, Arthur Kennedy, John Ireland, Jerome Courtland, and William Bishop. Stan Jones is listed as an uncredited technical advisor on IMDB for The Walking Hills. Set in the modern west, The Walking Hills was released in March 1949, and Columbia Pictures served as the distributor for the film.

According to author Michael K. Ward, it was when Stan Jones was heard singing his Ghost Riders on the Sky song for the cast and crew of The Walking Hills in the evenings, that star Randolph Scott urged him to pursue recording and publishing his song.

From May-July 1948, director William Wellman and actor Gregory Peck filmed the third of the 3 movies with scenes shot in Death Valley that year – Yellow Sky (1948).

The movie crews left Death Valley when filming was over, and regardless of whatever film crew he first sang it to, or who encouraged him to pursue getting his song published and recorded (it could well have been all three of the movie crews who did this), Stan Jones had made some valuable connections in the film biz before he arrived in Hollywood.

Ghost Riders in the Sky Success

It didn’t take long between Stan Jones shopping his song around in 1948, before it was recorded – by the songwriter himself.

The first well-known performer credited with recording Ghost Riders in the Sky, is legendary country-folk singer Burl Ives. Burl Ives’ version of Riders in the Sky was released by Columbia Records in February 1949.

However, it was big band leader and singer-actor Vaughn Monroe ‘s version of Ghost Riders in the Sky that made it to #1 on the music charts, in early May of 1949 – where it stayed for the next 3 months.

Meanwhile, inspired by the massive hit Vaughn Monroe’s recording of Jones’ song was enjoying in early 1949, cowboy singer-actor Gene Autry quickly recorded his own version and based a movie on it – Riders in the Sky (1949). IMDB‘s trivia details for the film Riders in the Sky have songwriter-actor Stan Jones riding herd and singing his song along with Gene Autry in the opening and closing scenes of Autry’s film, although Jones is only listed in the film credits as the soundtrack songwriter.

Riders in the Sky (1949) is a musical western starring Gene Autry, Champion, Gloria Henry, Mary Beth Hughes, Alan Hale Jr, Pat Buttram, and Hank Patterson. The plot of the film revolves around a (fictional) story for how the Ghost Riders song came about. This clip from Riders in the Sky features Gene Autry singing Riders in the Sky as Old Man Roberts (actor Tom London) lies on his deathbed.

In addition to the 1949 Gene Autry film of the same name, Ghost Riders in the Sky can be heard in several television series and movies, notably: 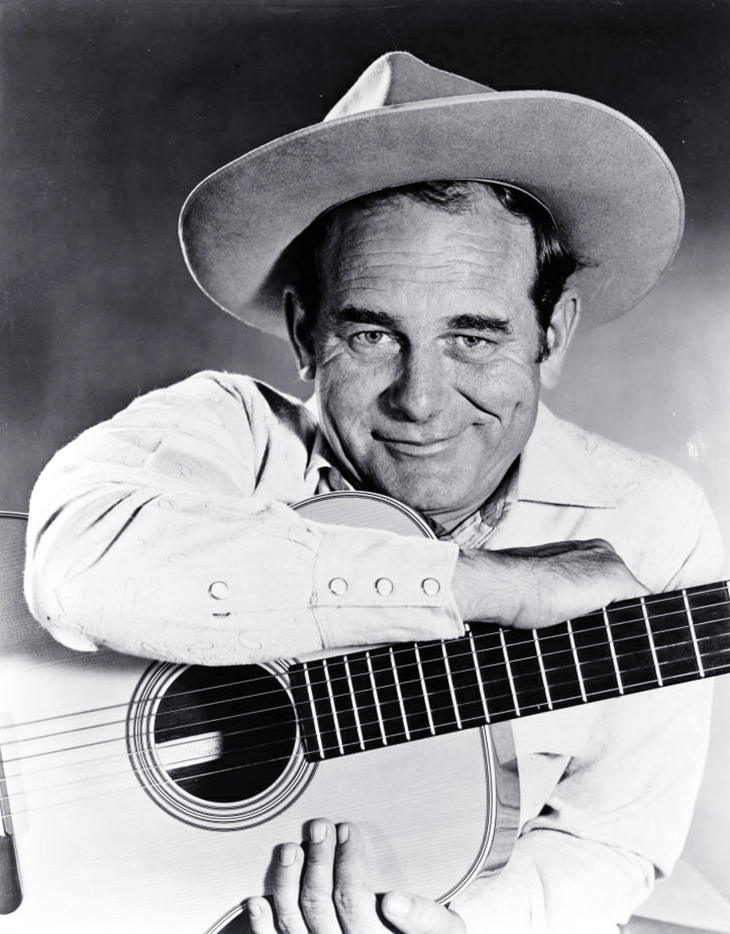 Future star of TV’s Gunsmoke James Arness is in the film, as is athlete Jim Thorpe.

Gene Autry, who had so admired Stan Jones’ mega-hit Riders in the Sky that he recorded it himself and named a film after it, tapped the songwriter-actor again for his 1951 western Whirlwhind (1951). Jones wrote the title song, performed by Gene Autry, and has an uncredited role as a rider in the film. In addition to Autry, Whirlwind stars Champion, Gail Davis, Thurston Hall, Harry Lauter, and Gregg Barton. 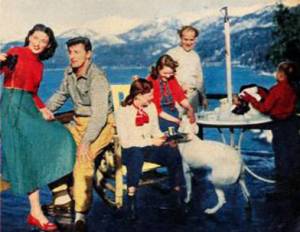 At some point, Stan Jones and his second wife Olive had become friendly with actor Robert Mitchum and his wife Dorothy.

In 1951, Mitchum and his wife, and their sons, stayed with Olive and Stan Jones at the Jones’ lodge on Lake Tahoe, California.

Perhaps because of these early and impressive film credits, Stan Jones was cast as Sheriff Blake in the 1952 movie The Last Musketeer, a western starring Rex Allen, Koko “The Miracle Horse of the Movies”, and Slim Pickens.

Stan Jones was confined to acquiring soundtrack / songwriting film credits for these movies:

1956 was a stellar year for Stan Jones. He wrote the theme song for director John Ford and star John Wayne’s classic post-Civil War western The Searchers (1956). The film also stars Vera Miles, Jeffrey Hunter, Ward Bond, Natalie Wood, Ken Curtis, Harry Carey Jr., and others. Jones didn’t have a role in the films but writing the song could be considered a reunion of sorts for his Death Valley filming days.

From 1956-1968, Stan Jones co-starred as Deputy Harry Olson on the contemporary western TV series The Sheriff of Cochise, starring John Bromfield as Sheriff Frank Morgan. Stan Jones is also credited as the series creator. This episdoe of The Sheriff of Cochise “Husband and Wife”, has star John Bromfield as the Sheriff, Stan Jones as Deputy Olson, guest stars Willis Bouchey as rancher Bert Peterson, and Mike Connors as conniving cowboy bigamist Jess Stiles.

Other television screen credits for Stan Jones include a minor role as Frank on 1955’s The Adventures of Spin and Marty TV show and the made-for-TV movie of the same name. Both the television series and movie starred Tim Considine as Spin Evans (later of My Three Sons fame), David Stollery as Marty Markham, Dee Aaker as Russell the Muscle, Roy Barcroft as Col. Logan, and Harry Carey Jr. as Bill Burnett.

Stan Jones was only 49 when he died of cancer on December 13, 1963. He was elected into the Western Music Association Hall of Fame in 1997.

His legend and that of Ghost Riders in the Sky, lives on in his songs.