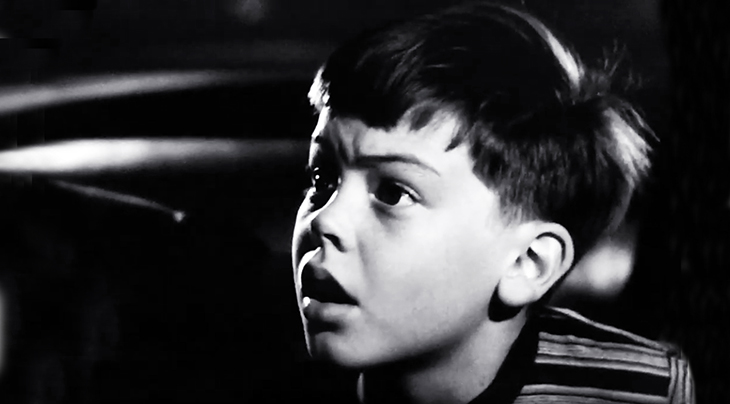 Made on a relatively low budget, The Window (1949) was a critical and financial success when it was released in May 1949 in the United States.

This suspenseful film-noir stars child actor Bobby Driscoll, who was loaned by Walt Disney to RKO to appear in the movie. Driscoll delivers in a riveting performance as imaginative young Tommy Woodry, whose previous exploits hearken the fable of The Boy Who Cried Wolf. 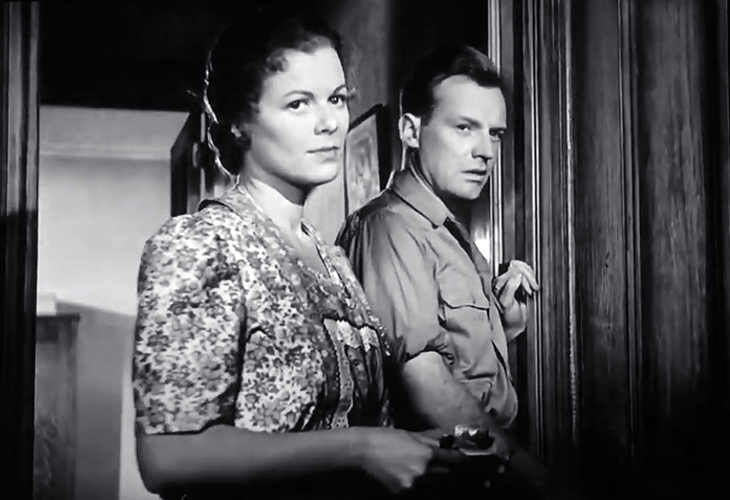 Tommy‘s parents (played by Barbara Hale and Arthur Kennedy) are distressed by his tall stories, and punish him to no avail. One night Tommy tries to escape the heat by sleeping on the fire escape outside their upstairs neighbor’s apartment window. He’s awakened by a noise, and witnesses a murder.

Terrified, Tommy tells his parents about what he saw, and can’t get them to believe him. He makes his way to the police station to report the crime, but is returned home by a skeptical police officer. The police officer checks with the upstairs neighbors – Jean and Joe Kellerson (Ruth Roman and Paul Stewart) – but doesn’t find anything suspicious. Tommy‘s mother takes him to the neighbors to make him apologize for falsely accusing them. 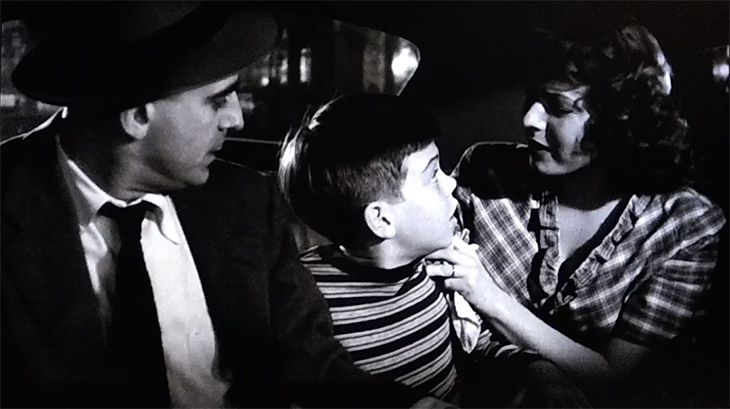 The tension ratchets up another notch when Tommy‘s mother is called out of town one evening to take care of a sick relative, and his father has to go to work, leaving Tommy alone with strict instructions to stay in the apartment. The upstairs neighbors have different ideas.

The Window was filmed in 1947 in New York City when Bobby Driscoll was only 10 years old. Howard Hughes acquired RKO soon after, and didn’t think either The Window or Driscoll’s performance in it, were particularly good. Hughes was finally persuaded to release the movie in 1949. Bobby Driscoll was 13 when he was given a juvenile Oscar at the 1950 Academy Awards for his performance as Tommy in The Window.

The adult actors in the film deliver restrained, believable performances, allowing the growing desperation of Tommy (as played by Bobby Driscoll), to capture attention and build suspense.

This is a movie that holds your attention from beginning to end, and the premise of unwittingly witnessing something through a window and not being believed, has been used to great effect countless times in films and books. The Window was based on crime fiction author Cornell Woolrich‘s short story The Boy Who Cried Murder / Fire Escape, and the movie was re-made several times with slightly different characters and plot points:

Perhaps the most famous movie about seeing something out a window is the classic Alfred Hitchcock film Rear Window (1954), starring Jimmy Stewart and Grace Kelly. Rear Window was also based on a short story by Cornell Woolrich, called It Had to Be Murder.

On May 23rd, 1949, West Germany / FRG (Federal Republic of Germany) was founded.  At the end of WWII, the Allies signed the Potsdam Agreement / Berlin Conference, which divided Germany into four administrative zone. The American Zone was in the south, the French Zone in the west, the British Zone in the northwest, and the Soviet Zone in the east.

The zone of Germany that had been occupied by Soviet forces became known as East Germany or the GDR (German Democratic Republic), and on May 23rd 1949 the other three zones were merged to create the new Federal Republic of Germany (West Germany).

This separation of East and West Germany split the city of Berlin in half, and became an even hotter issue in the Cold War when the Berlin Wall was later built by the East Germans/GDR in 1961, as a physical and very visible representation of the Iron Curtain separating East from West.

A state of affairs that only ended decades later when the Berlin Wall was torn down in 1989, Soviet forces withdrew from Afghanistan, and both US President George H.W. Bush and Russian leader Mikhail Gorbachev declared the Cold War was over at the Malta Summit.

Ghost Riders in the Sky #1 Hit Song for Vaughn Monroe

In May 1949, Singer Vaughn Monroe and his Orchestra topped the music charts with the cowboy legend/country song Ghost Riders in the Sky. The hit song is also known by the abbreviated Riders in the Sky, and A Cowboy Legend. Monroe’s version stayed at the #1 position for three months.

Written by former rodeo rider and forest ranger (and future actor) Stan Jones around 1947, the singer-songwriter recorded and released his own version of Ghost Riders in the Sky on Mercury Records in early 1949. Folk legend Burl Ives also managed to sneak in his own recording of the song before Vaughn Monroe’s recording of Riders in the Sky became a mega-hit in May 1949.

Ghost Riders in the Sky has been performed by multiple singers from diverse musical genres in the decades since Vaughn Monroe made it to #1. Crooners like Frank Sinatra, country music performers such as Johnny Cash, and alt-rock band Speedbait, have covered the song. The catchy tune even inspired Jim Morrison to write the Doors song Riders on the Storm, and REO Speedwagon’s Ridin’ the Storm Out.

Country-folk singing group Riders in the Sky was formed in 1977 and still performs this classic song in concert, in addition to many other legendary cowboy tunes.

Western Writers of America chose Riders in the Sky as the Greatest Western Song of All Time in their 2010 list of Top 100 Western Songs.