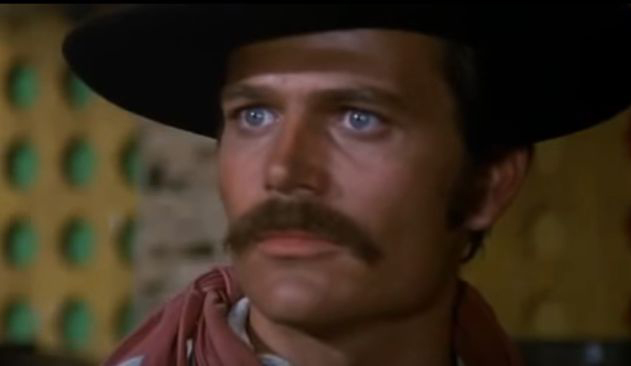 Patrick Wayne’s first 5 movie acting roles were in movies directed by his father’s friend, director John Ford; Patrick told Box Office Mojo that John Ford was his godfather. In both Rio Grande (1950) and The Quiet Man (1952), his father John Wayne co-starred with Maureen O’Hara, another friend of Wayne’s.

Of the over 40+ movies and another 40+ television credits Patrick Wayne accumulated during his career, 11 were movies and television works directed by the legendary director John Ford, 11 featured his father John Wayne, and five had John Wayne’s frequent co-star Maureen O’Hara in a leading role. Baby boomers will remember Patrick from these classic movies, which have frequently appeared on television in years gone by.

Patrick made his television debut as a baseball player in an episode of the Screen Director’s Playhouse, a 1/2 hour baseball drama called Rookie of the Year (1955). Rookie of the Year was directed by John Ford and starring John Wayne, Vera Miles, Ward Bond. These same actors, including Patrick Wayne (as Lt. Greenhill), would all be in John Ford’s classic big-screen western movie the next year, The Searchers (1956). That same year, Patrick had another, un-credited role in The Conqueror (1956), also starring John Wayne.

While attending Loyola Marymount University, Patrick Wayne co-starred with Dennis Hopper in the western The Young Land (1959) in his first leading role. Upon graduation in 1961, Wayne enlisted in the U.S. Coast Guard.

In addition to the earlier Rio Grande and The Quiet Man, Patrick Wayne played Capt. James Butler Bonham in the western epic The Alamo (1960), which John Wayne also directed and produced. He was Texas Ranger Tobe in The Comancheros (1961), which  John Wayne again directed.

In John Ford’s Donovan’s Reef (1963), and McLintock! (1963) (also starring Maureen O’Hara and Stefanie Powers), Patrick Wayne had bigger roles. Both McClintock! and the Vietnam War movie The Green Berets (1968) were produced by Michael Wayne, John’s oldest son and Patrick’s older brother, and had John Wayne as a director. 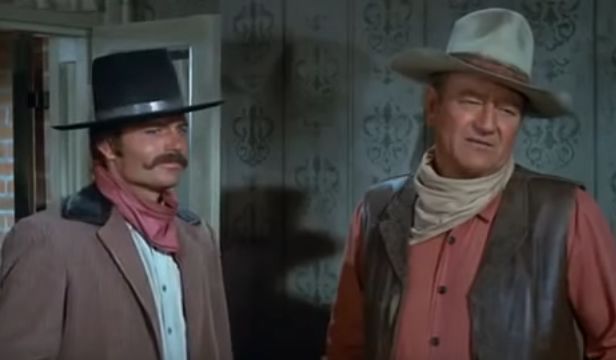 Flashing Spikes (1962) had Patrick Wayne as a baseball player in an episode of the Alcoa Premiere anthology TV drama series. The Flashing Spikes  episode was directed by John Ford and in addition to starring Jimmy Stewart, saw John Wayne appear in a long cameo. This was Patrick Wayne’s first time working with Jimmy Stewart, but he soon worked again with James Stewart in another John Ford directed and produced movie – Cheyenne Autumn (1964), which also starred Richard Widmark. The following year, Patrick played the son of James Stewart in the western classic Shenandoah (1965).

In the fall of 1964, two weeks before Patrick was set to marry fiancee Peggy Hunt, the wedding was called off. A little over a year later, 25-year-old Patrick Wayne married 23-year-old “socialite” Peggy Hunt in Hollywood on December 11 1965.

Peggy and Patrick Wayne had three children during their 13 year marriage – sons Michael and Anthony Wayne, and daughter Melanie Wayne. They divorced in 1978.

During the 1960’s, Patrick Wayne’s roles gradually became larger. He had a co-starring role with actor Robert Lansing in the western movie An Eye for an Eye (1966). In the western sitcom The Rounders (1966), a spin-off from the big-screen movie of the same name the previous year, Patrick Wayne had a co-starring role, along with veteran actor Chill Wills.

As the 70’s came to a close, Patrick Wayne and Shirley Jones co-starred in Jones’ short-lived comedy-drama television series Shirley (1979); Wayne was her love interest. At the beginning of the 1980’s, Patrick Wayne hosted The Monte Carlo Show variety television series, which filmed in Monte Carlo. At the beginning of the 1990’s, he hosted 13 episodes of the revived television game show Tic-Tac-Dough before the series was cancelled.

After his father died of cancer, Patrick and his brothers and sisters founded what became the John Wayne Cancer Institute at UCLA in the 1980’s. Below, Patrick Wayne and his brother Michael Wayne, with a model for a statue of John Wayne for the airport name in his honor. 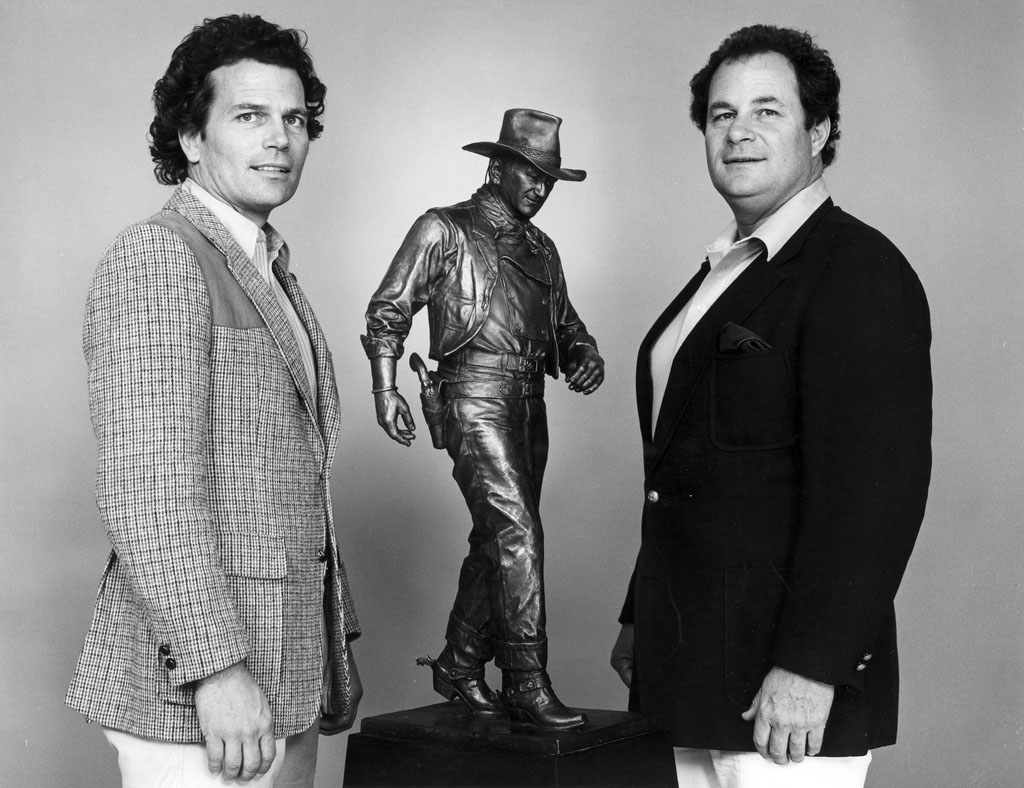 Patrick Wayne remained active in movies throughout the 1990’s. He was a leading man in the movies Beyond Atlantis (1973) and the Walt Disney movie The Bears and I (1974); in Mustang Country (1976) he co-starred with veteran actor Joel McCrea.

As he turned the corner into his 50+ years, Patrick Wayne co-starred the Tom Selleck (Magnum, P.I.) mystery Her Alibi (1989). After an absence of 8 years from the big-screen, Wayne returned to film a part in his last movie to date, Deep Cover (1997). His last non-documentary television appearance was in an episode of Silk Stalkings in 1997.

Patrick Wayne had been single since his 1978 divorce from Peggy Hunt, until he met younger Misha Anderson (approximately 30 years his junior) at the wedding of a friend’s daughter. The couple married in May 1999.

Between 1984-2011, Patrick Wayne was involved in 7 documentaries about his famous father John Wayne, director John Ford, and their movies. Now a septuagenarian senior citizen, Patrick Wayne has been married to Misha for 17 years.

Retired from acting since the early 2000’s, in 2003, just before becoming a senior citizen Patrick took on the role of chairman of the John Wayne Cancer Institute.

Perhaps another reader will have the answer.

Perhaps another reader will have the answer.

To me John Wayne was what a true Cowboy was suppose to be like.He always proved that good always won over bad.And he did what he wanted to do and choose his friends that would be friends for life.When I would watch a John Wayne movie I felt a little remorse for the bad guy!

All my life 67 years, been a huge fan of John Wayne and Patrick Wayne, I have acquired a collection of memorabilia, I have 2 boxes OF Winchester bullets, each stamped with "DUKE" on the end, and a cassette tape of AMERICA AND WHY I LOVE HER, by John Wayne commemorative. To this day, I still believe The Duke would have a great PRESIDENT, because, he is AMERICA, I would very much like to donate any of my collection to the Wayne family.

I never could figure out why Patrick Wayne did not become a bigger star that he was. He certainly had much better looks than his father and a much more attractive scene personality. I was never a fan of John Wayne.

Well, I echo many other folks here. I am a Hugh John Wayne fan, and loved you and your brother in his films. I was devastated when your dad passed away as I wanted to meet him in person (i was young when he passed away but he was my first and only hero aside from my dad. To this day I still search for movies he made that I did not see.

At any rate, i would love to meet you as well. I doubt it will happen, but I hope you are well.

Hi Patrick my name is Linda Johnson and I love watching u and your dad on t v.I still watch u on the western that come on every day.I am a black women and I still love both of u.I heard that he didn't like black.I don't care God can charge anyone. May God bless you and your family always. Linda johnson

Sorry but Senior City does not have contact information for Patrick Wayne.

Patrick, in 1976 my former husband (Dr. Gerald Wilks) and I, along with our 6 children were living next door to Ernie and Myrna Saftig on Lido Isle. Your Dad would come over occasionally in his huge "station wagon" - or whatever it was - and visit them. Of course, we were all star struck, but maintained our manners and tried not to peek over the wall separating our two homes, but we could hear your Dad's booming voice along with Ernie's - and the two of them reminiscing about the good 'ol days. We loved those two people. Anyway, during this time one of our children was around 9 years old - Myrna seemed to take a particular liking to him - and one day she came to the wall and handed me a pair of pretty "used" cowboy boots and told me she wanted to give them to Kent and that they had belonged to you - back in the day. Kent wore them some, but I wanted to preserve them and having just made another move in my life recently, these boots reappeared. I have them on a shelf and will leave them to one of my sons (they were supposed to go to Kent, but he passed away 9 months ago.) Of course at this point, being there is no proof - other than my word - that these belonged to you - John Wayne's son - even my older children are questioning if this is a true story. I am sure you remember Myrna, and if so, you know she would have never made up that story, but I was just wondering if you remember having a "broken-in pair" of cowboy boots that Myrna and Ernie had in their possession. If so, it would certainly help out my story in relating this to my friends and being able to be credible to my children.

If I don't hear from you, I will totally understand. Just thought it was worth a try to correspond with you.

Sorry but Senior City does not have contact information for Patrick Wayne.