Donna Douglas was a real-life tomboy before she arrived in Hollywood and played animal-loving, beautiful tomboy Elly May Clampett on The Beverly Hillbillies. 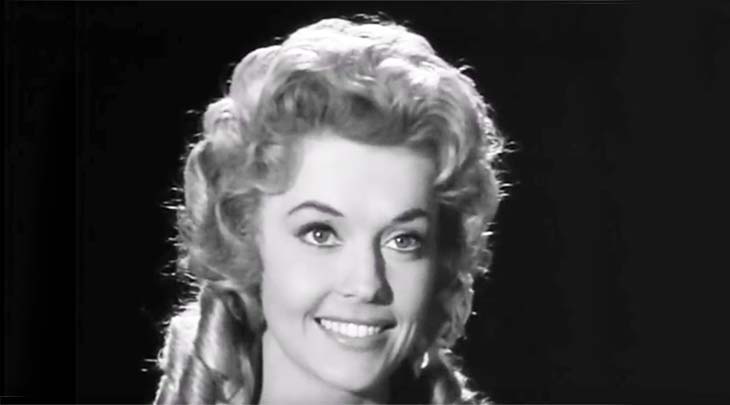 Doris Ione Smith was born on September 26, 1932 in Pride, Louisiana. An older Donna Douglas confessed to the Ames Tribune in a 2014 interview that she was a lot like her Elly May Clampett character on The Beverly Hillbillies, in her early years in Louisiana.

“Elly was a slice out of my life…I was raised a tomboy with one older brother and all male cousins. So I grew up swinging from vines and playing softball. I was getting ready for Jethro long before we ever met.”

Young Doris (or Dorothy, according to some sources) was only 17 when she married Roland Bourgeois Jr. in 1949. The couple lived with her parents during their entire marriage. Their son Danny P. Bourgeois was born in 1954, the year they divorced.

Despite her youthful tomboy leanings, Douglas’ obvious outward youthful physical beauty had matured with marriage and motherhood. She won some local beauty pageants (Miss New Orleans 1957), then moved to New York City to pursue a modeling and acting career.

By the time she was the “Letters Girl” on Perry Como’s Kraft Music Hall variety series in 1957, and “Billboard Girl” on The Steve Allen Plymouth Show from 1959-1960, she’d taken the name of Donna Douglas.

Douglas had a small role with Mike Connors on his early TV crime drama series Tightrope (before he became known for Mannix), but it was an appearance on The Ed Sullivan Show that caught the eye of legendary Hollywood movie producer Hal B. Wallis. Douglas was soon signed to a movie contract by Wallis. 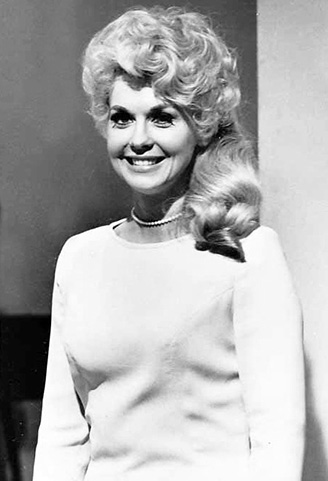 Her first film role was in the Hal Wallis-produced drama Career (1959) starring Dean Martin, Anthony Franciosa, Carolyn Jones (best known for later playing Morticia Addams on The Addams Family), Joan Blackman, Jerry Paris (Jerry on The Dick Van Dyke Show), and Shirley MacLaine. Although Donna Douglas appeared in another Dean Martin movie the next year, it was in a small, uncredited role as a “party girl” in the musical Bells Are Ringing (1960) co-starring Judy Holliday, Fred Clark, Jean Stapleton (Edith on All in the Family), and Frank Gorshin (The Riddler on Batman)

In the rom-com Lover Come Back (1961) starring Rock Hudson, Doris Day, Tony Randall (Felix Unger on The Odd Couple), and Ann B. Davis (Alice the maid on The Brady Bunch), Donna Douglas had a slightly larger role as a a secretary.

Although best known for her work as Elly May on the The Beverly Hillbillies from 1962-1971, Donna Douglas kept busy on television throughout the 1960s.

She had a recurring role in 1961 as Barbara Simmons on Checkmate, starring Doug McClure and Sebastian Cabot.Fellow guest stars in the episodes she appeared in include William Schallert, Mickey Rooney, Parley Baer, and Ken Lynch,

Douglas can be seen in 3 episodes of the popular comedy series Mister Ed, including the “Clint Eastwood Meets Mister Ed” episode. She appeared in an episode of Bachelor Father with series regulars John Forsythe, Noreen Corcoran, and Sammee Tong.

In “The Hungry Glass” 1961 episode of Boris Karloff’s Thriller, Donna Douglas guest-starred as beautiful young Laura Bellman, entranced and trapped by her mirror. Fellow guest stars in the episode include William Shatner as Gil Thrasher, Joanna Heyes as his wife Marcia, Russell Johnson and Elizabeth Allen as their friends Adam and Liz Talmadge.

Other with episodic TV appearances for Donna Douglas during the 1960s included the following highlights: 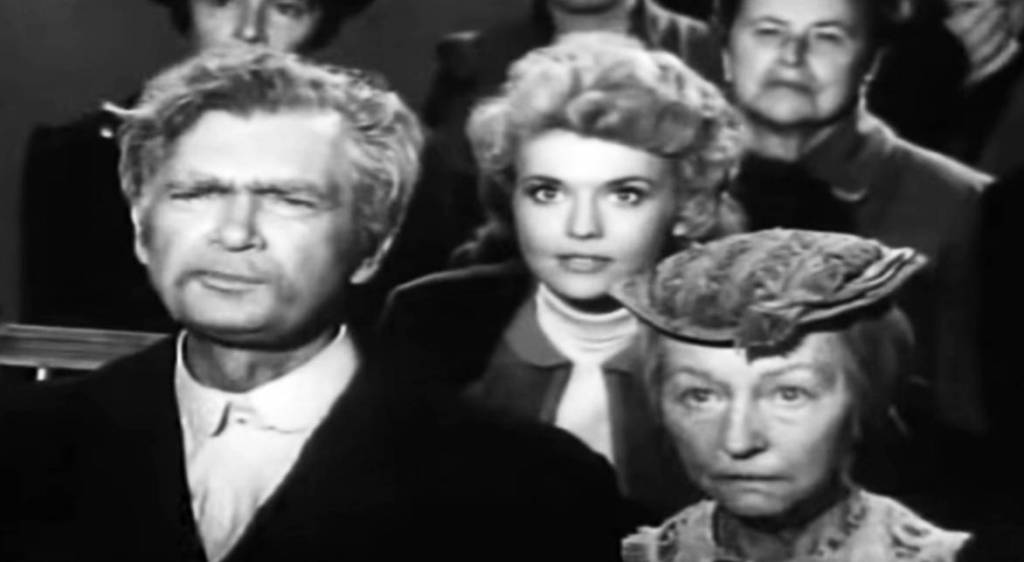 The role that Donna Douglas will be remembered most for is that of the beautiful, innocent, animal loving Elly May Clampett. She played actor Buddy Ebsen’s (Jed Clampett) daughter, granddaughter of actress Irene Ryan (Granny), and cousin of Max Baer Jr. (Jethro Bodine). 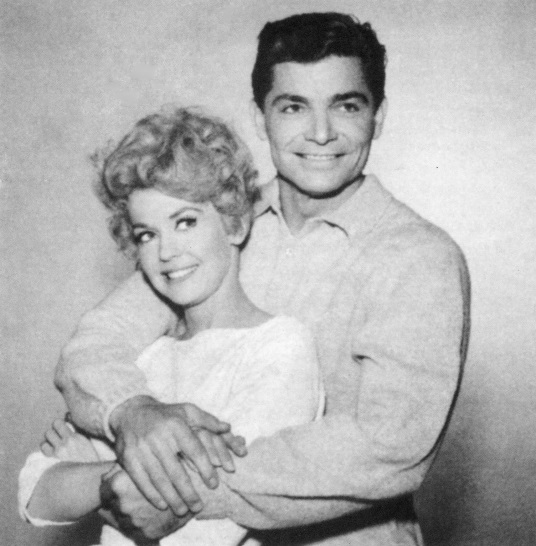 Douglas has said it’s been estimated that she worked with over 500 animals on the set of The Beverly Hillbillies during it’s 9-year run on the air.

Buddy Ebsen and Donna Douglas maintained a close life-long friendship off-screen after the end of the series in 1971.

Douglas said in interviews that Ebsen reminded her strongly of her father, and was a wonderful man.

Below, the Pygmalion and Elly (1962) episode of The Beverly Hillbillies features Donna Douglas as Elly May and actor Louis Nye as her fanciful suitor Sonny Drysdale (son of their bank manager & neighbor Mr. Milburn Drysdale on the series).

She married second husband Robert M. Leeds in 1971; Leeds was a director on The Beverly Hillbillies. They divorced in 1980. 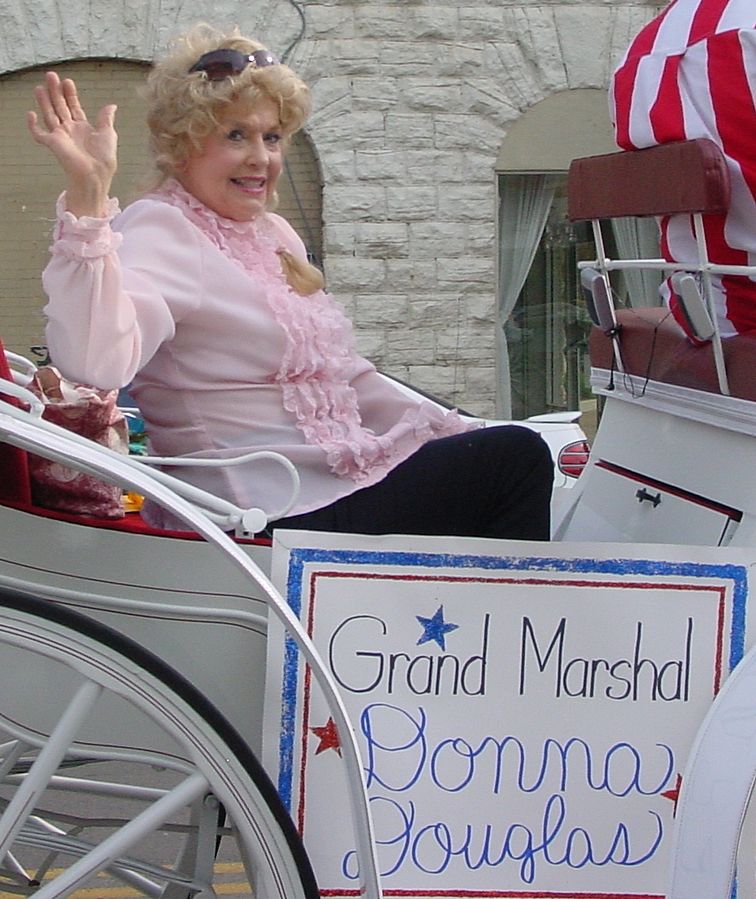 Douglas became a gospel and country music recording artist and performer in the 1970’s and 1980’s. In her senior years, she made a rare onscreen appearance in 1999, guest-starring with Hal Linden on an episode of The Nanny starring Fran Drescher, Charles Shaughnessy, and Nicholle Tom.

In 2013, her cookbook, Southern Favorites with a Taste of Hollywood, featured recipes from her many celebrity friends.

Donna Douglas died on January 1, 2015 from pancreatic cancer at the age of 82 in Louisiana (the same state she was born in, in 1933). She was a great-grandmother thanks to her son Danny Bourgeois, his children and grandchildren. 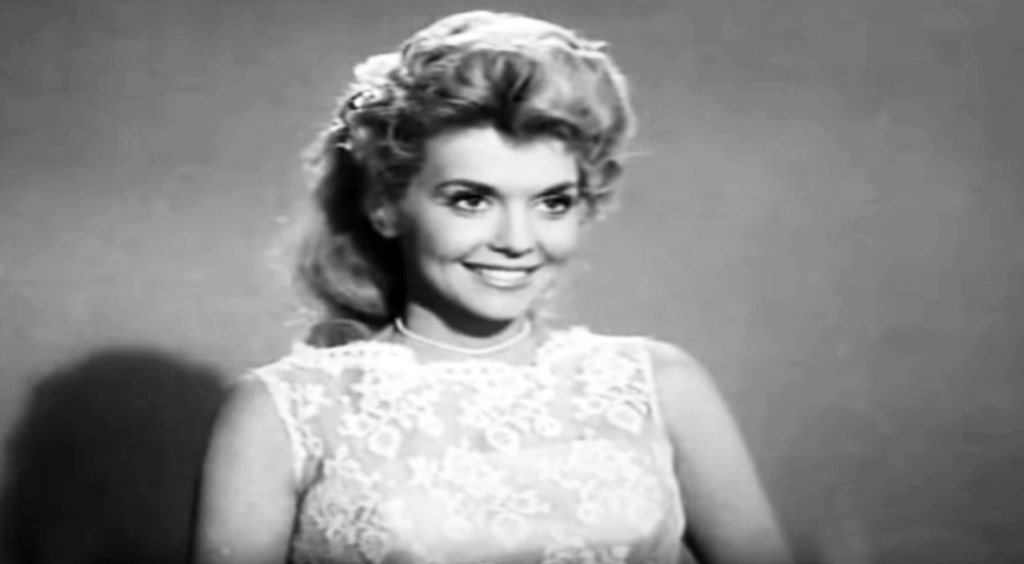 Note: This article was first published in January, 2015 with the title Farewell Donna Douglas. It has been updated with new & additional content.

I will always remember you as the most beautiful girl on TV in the 60's and better than that, you are from my home State of Louisiana! I thought, with many of my friends, that one day we would all get to meet you in person. Sorry that did not happen. God Bless Donna, you have left us with pleasant memories!!!!

it a compliment.
hugs and love Donna xoxoxoxo