These Valentine’s Day greetings may inspire you to send a Valentine to someone(s) special. As a lover of history, poetry, and art, I found my inspiration for these customized greeting cards from several sources – vintage paintings, romantic or funny poems and songs, and the lives of some famous artists and writers from the last 300 years

Then it must be admitted that I went a little crazy, and ruthlessly mixed and modified the original texts and artwork from some glorious masters of their craft (I’ve identified them where known). So scroll on down to take a tour of my Vintage Valentines based on the historical eras that they best represent.

The reign of England’s King George I began in 1698, and so began a period of history known today as the Georgian Age. 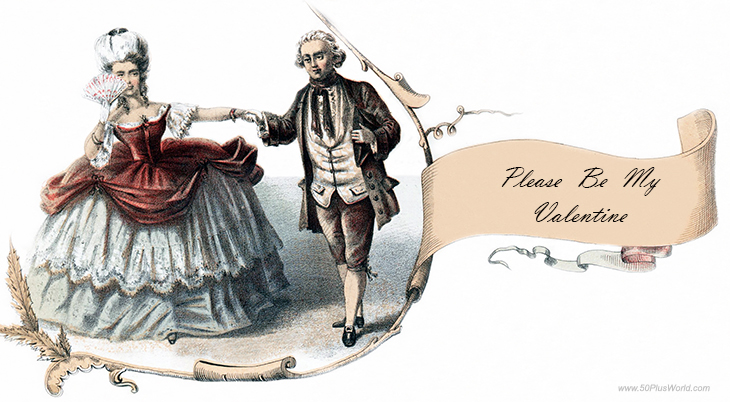 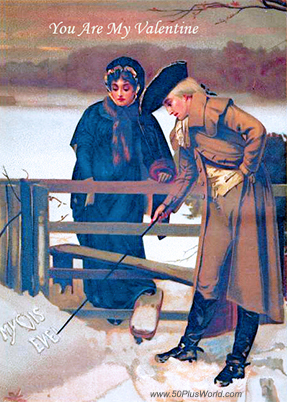 A 1700s-style Valentine, inspired by a 1896 painting by W. Holyoake Cassell in Comfort magazine.

The Regency era covers the timeframe when King George III’s son George IV ruled as the Prince Regent, while his father was incapacitated due to mental illness. Fans of the recent Netflix series The Bridgerton’s (2020) saw a little of this history alluded to in the first season of the show.

During the Regency period several people aspired for the position of top romantic poet, among them John Keats (b. 1795-d. 1821), and Percy Bysshe Shelley. However, there was likely no poet whose romantic and narrative poems were more widely read or popular, than Shelley’s friend, Lord Byron.

Of cloudless climes and starry skies;

And all that’s best of dark and bright

Meet in her aspect and her eyes;

Thus bellowed to that tender light

Which heaven to gaudy day denies.

One shade the more, one ray the less,

Had half impaired the nameless grace

Which waves in every raven tress,

or softly lightens o’er her face;

How pure, how dear their dwelling-place.

And on that cheek, and o’er that brow, so soft, so calm, yet eloquent,

The smiles that win, the tints that glow,

But tell of days in goodness spent,

A mind at peace with all below,

A heart whose love is innocent!

Lord Byron was described by Glenarvon (1816) novelist Lady Caroline Lamb as “mad, bad, and dangerous to know”, which may have summed up his adult life, as well as their affair (she was married to the Hon. William Lamb at the time). Letters and journals examined by scholars indicate Byron had romantic relationships with men and women, and the scandal from his failed marriage, extra-marital affairs, and mounting debt, caused him to leave England for the last time in 1816. He continued to live a colorful life abroad in Italy and then Greece, until his death in 1824. 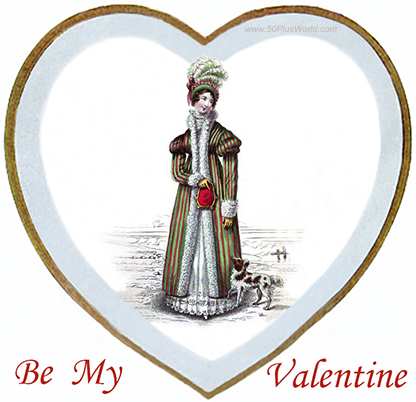 During the Regency era, women’s fashions slimmed down and became high-waisted.

In addition to being mentioned in almost every Regency Romance novel ever written, Lord Byron’s poems have formed the basis for several plays and movies. He is featured as a character in many films set during the Regency, including:

Military commander Jean Lannes, Duke of Montebello, was one of France’s ablest commanders during the French Revolution and Napoleonic Wars. He divorced his first wife Paulette Meric in 1800 after five years of marriage, for infidelity (she had a baby while he was away at war in Egypt; a dead giveaway).

Jean was a personal friend of Emperor Napoleon Bonaparte, and Louise was a member of Empress Marie Louise’s court. Napoleon created the title of Duke of Montebello for Jean Lannes in 1808. 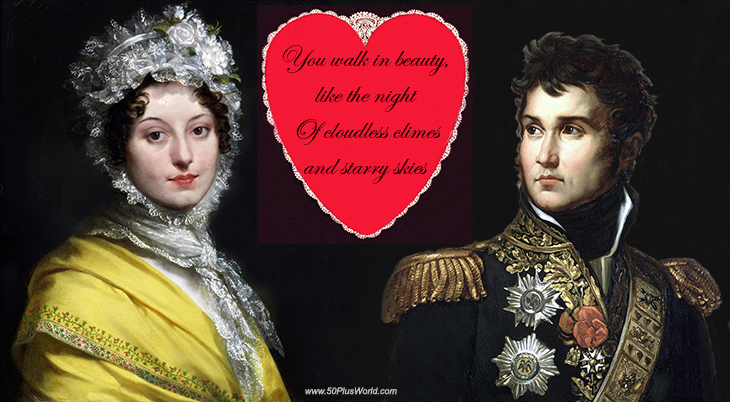 A Napoleonic-Regency inspired Valentine, paraphrasing Lord Byron’s poem, with the Duchess and 1st Duke of Montebello.

Queen Victoria of England was born in 1837 and died in 1901; styles changes dramatically during the 60 years that she reigned. Crinolines were in style in the first half of Victorian era (1837-1860s). 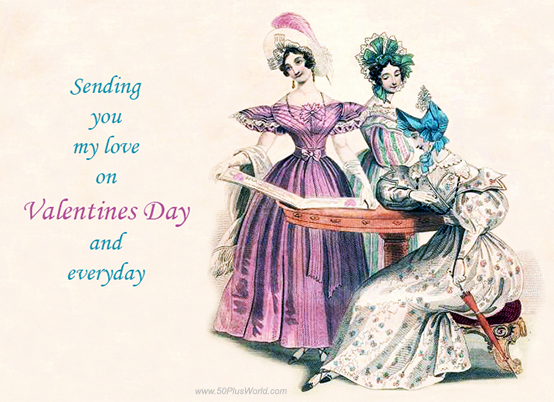 Valentine based on an 1833 fashion illustration from Godey’s Lady’s Book, in the early Victorian era .

In the U.S., this period is also known as antebellum (ante meaning after the War of 1812), and usually signals the timeframe of 1812 until the start of the Civil War in 1861. 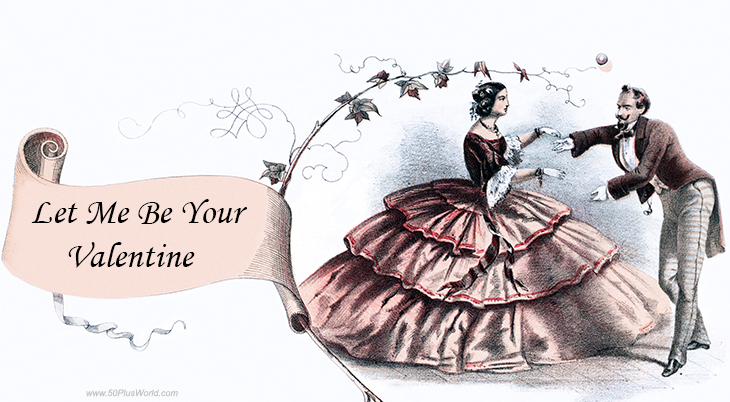 A Victorian-Era 1860s Valentine greeting, based on an 1800s “Polka Elégante” song sheet.. 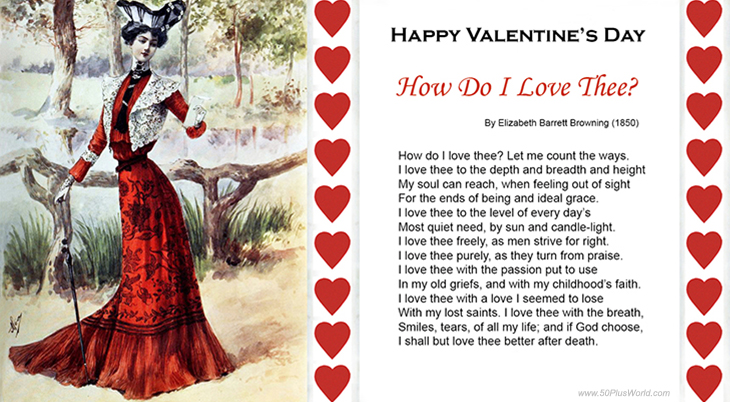 A late Victorian-Era inspired Valentine, from an illustration in Latest Paris Fashions (1877).

By the late 1800s, women’s styles were more streamlined again; crinolines were out and bustles were in.

Rudolph Besier turned the story of Elizabeth Barret’s life into the 1930 play The Barrett’s of Wimpole Street. The play has been turned into a feature film of the same name twice: 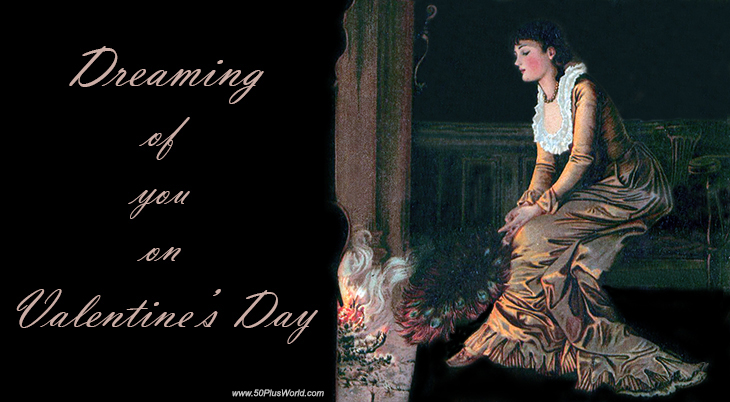 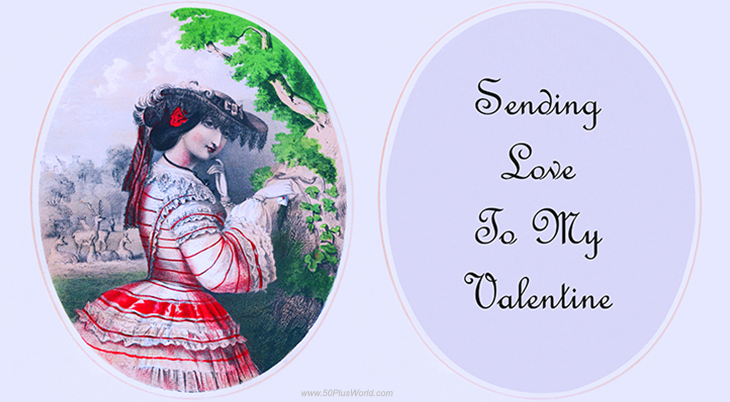 Sending Valentines started to grow in popularity by the late 1800s, and romantic love as a theme expanded to include friends and family, around the turn of century – thanks to commercialization and mass-production. 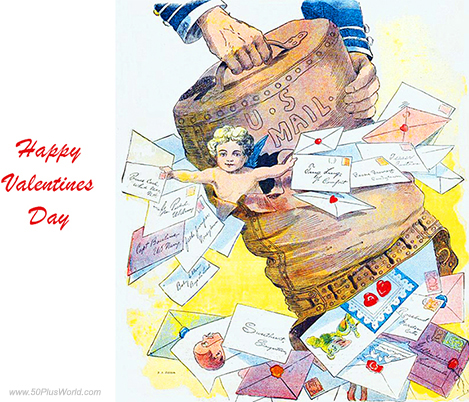 An 1896 Valentine based on a cover of Comfort magazine.

The Silent Film Era encompasses the Belle Epoque, the Edwardian Age (1901-1910) during the reign of King Edward VIII, and the Roaring Twenties / Jazz Age, as captured by the works of F. Scott Fitzgerald. 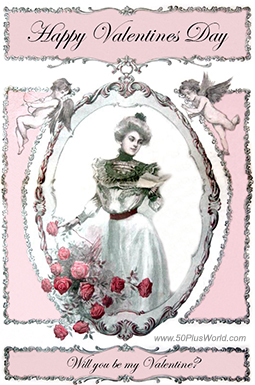 An Edwardian-era Valentine greeting, inspired by a cover of Ladies World (1902).

Modern artistry began to change the face of magazine covers and Valentine’s Day cards. American magazine cover artist Coles Phillips began experimenting with the use of negative space, below. 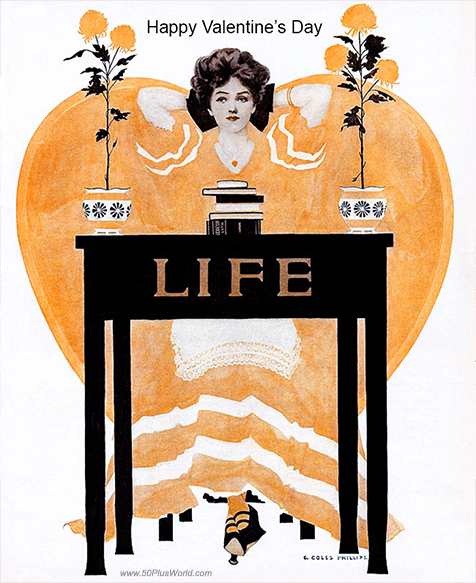 A card based on Coles Phillips 1908 Valentine’s Day cover for Life magazine. 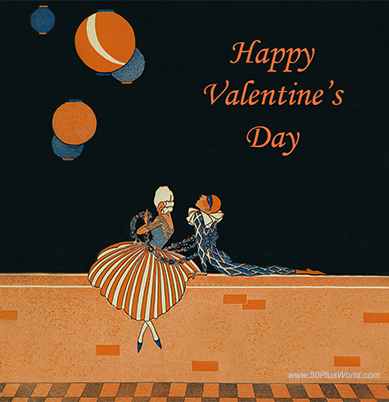 A Valentine greeting based on a 1910 “Let Me Call You Sweetheart” song sheet painting by Mary F. Kidder.

Brantford Six Nations native performer and poet E. Pauline Johnson‘s (b. 1861) poetry and recitals were popular in Canada, the United States, and Great Britain from the 1890s until (and after) her death in 1913. The independent Johnson never married, although she had many romances and marriage proposals.

Despite her popularity, and publication of her works in magazines and collected poetry volumes such as The White Wampum (1895) and Feather and Flint (1912), E. Pauline Johnson never achieved financial success from writing during her lifetime. 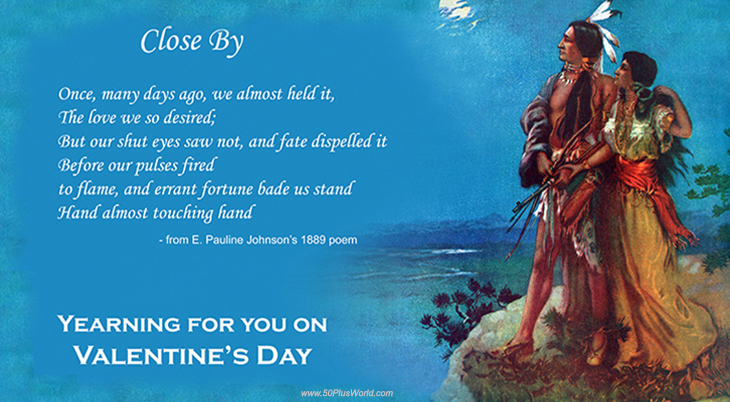 Prolific songwriter Irving Berlin’s works (1500+ songs) are a staple of the Great American Songbook. One of his early global hit songs was Alexander’s Ragtime Band (1911), which sparked a world-wide ragtime music and dance craze. Although many of Irving Berlin’s songs are deeply romantic ballads such as Blue Skies (1926), and Always (1925), he also had a lighter side, with up-tempo jazzy tunes like Puttin’ On the Ritz (1928).

In 1913, he had a hit with the funny Snookey Ookums song, which was later performed by Judy Garland while she and Fred Astaire dance to it in the 1948 film Easter Parade (another Berlin hit song). 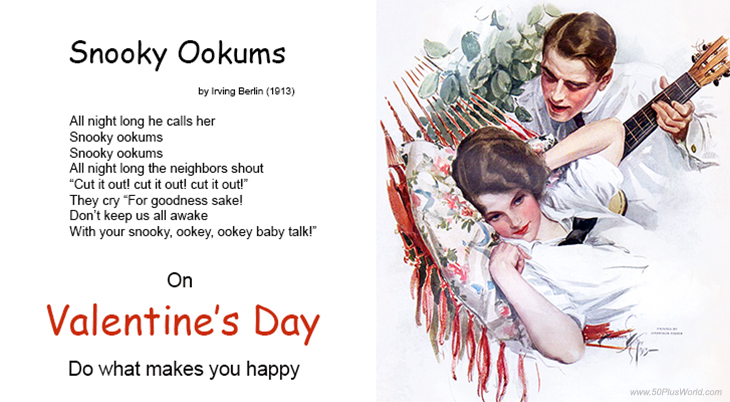 Berlin’s songs were (and still are) featured in countless stage musicals (Ziegfeld Follies) and films (The Jazz Singer, 1927), and have been favored by recording artists from Bessie Smith and Al Jolson to Kate Smith (God Bless America) and Bing Crosby (White Christmas). When the 101-year-old Irving Berlin died in 1989, the lights were dimmed on Broadway.

As the 1920s ushered in the Jazz Age, it wasn’t just the arts and entertainment magazines like Shadowland that sought to capture that era mood on their covers. 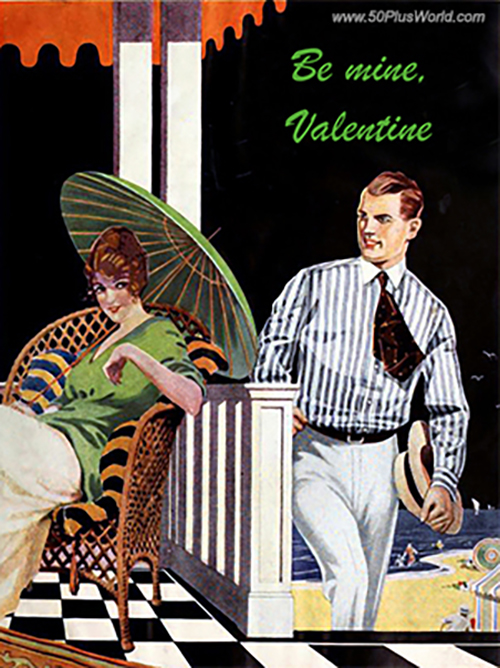 An Jazz Age Valentine greeting based on a 1921 Forsyth Shirt cover of Men’s Wear Review.

And so ends my vintage Valentine tour through the last 300-odd years of fashion and history. For more vintage-inspired Valentine’s Day greetings, check out our Facebook and Pinterest pages (you can share right from there too).

And if you’re a fan of Valentine’s Day and movies or history in general, you  may also like these articles:

*All original works of art and literature that these Valentines are based on are believed to be in the public domain and/or Creative Commons licensed & sourced via Wikimedia Commons.*