A Drumroll For Charlie Watts

Perpetual Rolling Stone drummer Charlie Watts has given his final encore, passing away on August 24, 2021 at the age of 80. Watts wasn’t the first Rolling Stones Drummer, and won’t likely be the last, but he nailed down the title as the longest – from 1963 to 2021. 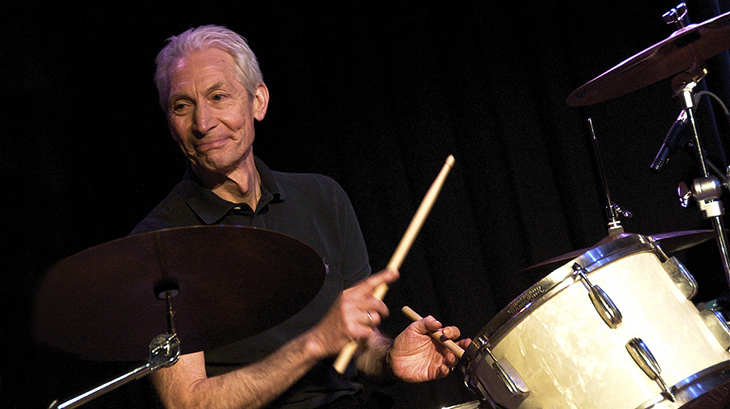 Charlie Watts was born on June 2, 1941 in London, England during World War II. As a boy Watts and his neighbourhood friend Dave Green were jazz fans. Charlie’s parents gave him a drum kit in 1955, and both he and Dave began playing in the Jo Jones All Stars jazz band in 1958 at the age of 17.

After leaving Harrow Art School (University of Westminster) in 1960, Watts began working as a graphic designer by day, and played drums at night.

He continued to hone his drumming skills in rhythm and blues clubs. During a stint as a drummer for the band Blues Incorporated in 1961 and 1962, he first met musicians Brian Jones, Mick Jagger, and Keith Richards. Watts was already dating Royal College of Art sculpture student Shirley Shepherd when The Rolling Stones asked him to join their band in 1963. 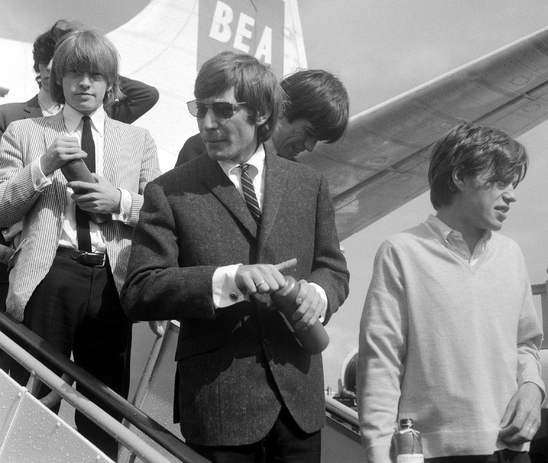 In his early years with The Rolling Stones, in addition to playing drums, Watts also put his graphic design skills to use in designing some of the early Rolling Stones album sleeves and stages for tours. His girlfriend Shirley would often go on tour with the band.

Charlie Watts quietly married Shirley Ann Shepherd in October 1964, and their daughter Serafina was born in March 1968. Such a long-standing marriage in a rock and roll band, especially The Rolling Stones, stands out as a remarkable exception to the norm. Reportedly Watts never indulged in affairs during his marriage, turning down groupies while touring.

Watts had said that for a three year period in the mid 1980’s, he struggled with and overcame, problems with alcohol and drug use that almost ended his marriage. 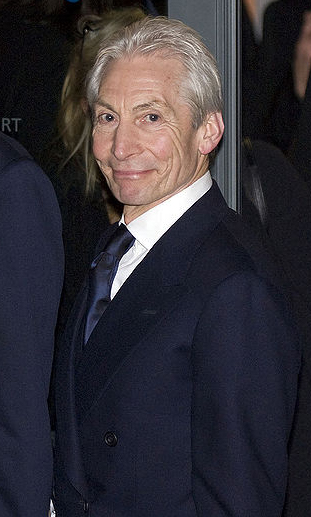 A fit and happy looking Charlie Watts in 2008 (Photo: Siebbi )

Despite being in perhaps the biggest rock band of all time for the past 50+ years, Watts was a steadfast jazz afficionado. He toured and performed with other boogie-woogie, jazz and big bands in between Rolling Stones gigs. He performed on and recorded nine non-Rolling Stones albums since 1986, most of them as The Charlie Watts Quintet, or a version thereof.

Charlie and his wife Shirley began owning and then breeding world-class Arabian horses in the 1980’s. In 2013 they owned well over 200 horses.

His daughter Seraphina Watts made him a grandfather in his 50+ years, when she gave birth to his granddaughter Charlotte Watts in 1968.

A smoker until the late 1980’s, Watts was diagnosed with throat cancer in 2004 and was in remission after undergoing underwent radiotherapy. A couple of years later Modern Drummer magazine voted Charlie Watts into their Hall of Fame in 2006.

When not recording and touring with The Rolling Stones, Shirley and Charlie Watts lived near Dolton, England and their 600 acre, prize-winning Arabian horse stud farm (Halsdon Arabians). They celebrated their 56th wedding anniversary in October 2020.

When Charlie Watts died on August 24, 2021 at the age of 80, he left behind his widow Shirley, 53-year-old daughter Seraphina, and granddaughter, model Charlotte.

Note: This article was first written in 2016 as Celebrating Seniors – Charlie Watts Turns 75. It has been updated with new & additional content.