Before Tippi Hedren became a critic of keeping exotic pets in homes and successfully lobbied Congress in 2003 to outlaw the traffic of big cats between states, the actress kept lions on her own property in the 1970’s!

Tippi Hedren still keeps lions, but they’re now housed on the Shambala Nature Preserve she founded in 1983 in California. 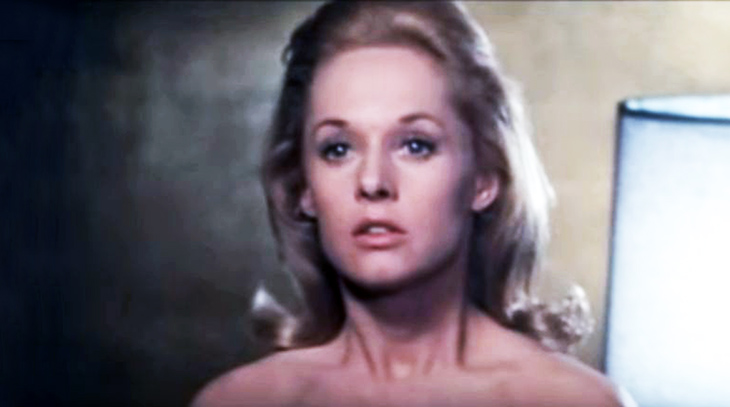 Nee Nathalie Kay Hedren on January 19, 1930 in New Ulm, Minnesota, the actress acquired the family nickname Tippi growing up. At the age of 20 she moved from Los Angeles to New York to become a model, and carved out a successful career in commercials.

Hedren’s only child, daughter and actress Melanie Griffith, is a product of her first marriage in 1952 to Peter Griffith (they divorced in 1961). Tippi had been a young mother, modeling for around 11 years on the East Coast, before she moved her family to California in order to begin acting in films in the 1960s.

This movie clip features Tippi Hedren and Rod Taylor, as “Melanie” arrives on the island and is greeted for the first time by The Birds.

At the time Hedren spoke glowingly about the famous director, and willing starred again the next year in Marnie, another Alfred Hitchcock suspense film, opposite leading man Sean Connery. In Marnie, Hedren plays an emotionally disturbed woman who is terrified of her husband, played by Connery.

Hedren’s troubled working relationship with Alfred Hitchcock was captured in a book and a 2012 movie The Girl. She recalled for an interviewer in 1963 that a cage was built for the attic scene in which she’s attacked by birds – ravens, crows, and seagulls – a process which took 7 days to film, during which she was scratched and bitten on her face and close to her eye.

“So at the end of this scene I collapsed and was sent to bed, under doctors orders, for five days“. 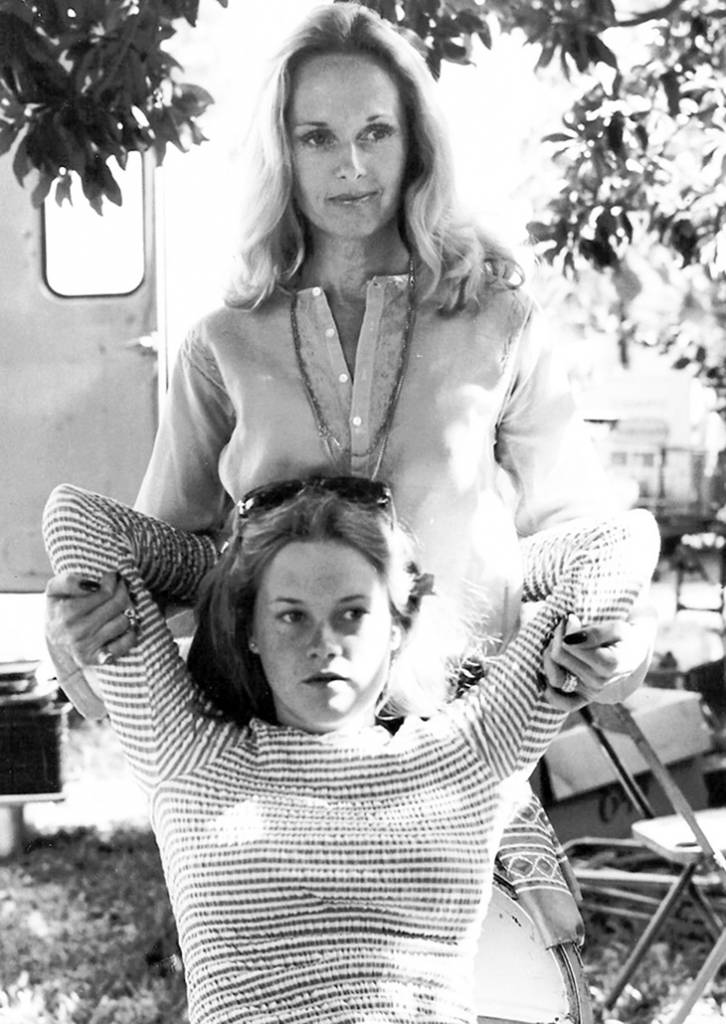 Big Cats at Home & In Movies

Tippi Hedren was married to second husband Noel Marshall for almost 18 years, from 1964-1982. The couple became intensively involved with big cats during their marriage, even bringing lions into their home to live. As a result, Hedren, Marshall, and all of the family members living with them, were injured at one time or another by lions. 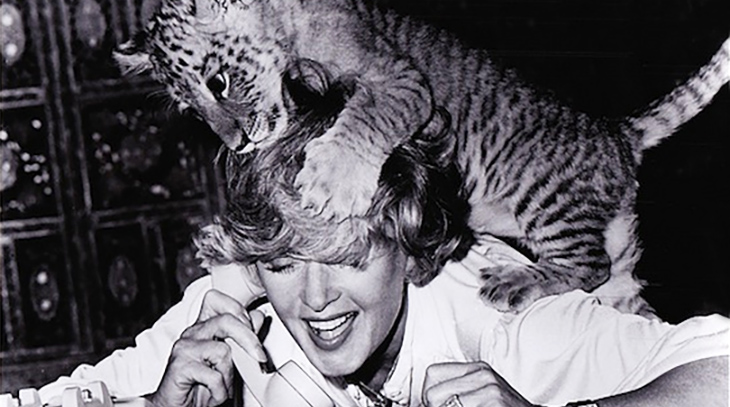 The Australian movie Roar (1981) about a family that travels to Africa to meet their father, starred Tippi Hedren, and her real-life family – husband Noel Marshall, daughter Melanie Griffith, and Noel’s son’s John and Jerry Marshall. Joel Marshal (Noel’s other son) worked behind the scenes and as an art director on Roar.

The movie trailer for the re-release of Roar features a pride of lions and other big cats, along with the human stars – Tippi Hedren,  Melanie Griffith, and Noel Marshall.

Tippi Hedren’s films during the 1980s and 1990s were minimal, but she did have a few smaller, supporting roles in these movies.

Hedren could be seen onscreen occasionally on television in episodic guest-starring gigs on series like Hotel, Hart to Hart, In the Heat of the Night, and Chicago Hope. She played the recurring character of Judith’s mother in the comedy Dream On, starring Brian Benben as Martin Tupper and Wendie Malick as Judith Tupper Stone.

Tippi Hedren married for the third time, to Luis Barrenechea in 1985; they divorced in 1995, and she has not since remarried.

Hedren’s career seemed to pick up steam during her 60+ and septuagenarian years. She starred in The Storytellers (1999), a comedy with Brad Dourif, Zach Galligan, and Winsor Harmon. In The Storytellers, Hedren plays Lillian, an older writing trying unsuccessfully to sell scripts in Hollywood. Her grandon Kris Kringle (Michael Worth) helps her promote her scripts.

After a cameo in the Don Murray film Internet Love (2000), Hedren had a recurring role on the short-lived romantic drama series Fashion House, and appeared in 10 feature films between 2001-2008 that included these movies:

A glowing Tippi Hedren (approximately age 77) was interviewed in 2007 by Tom Gregory and reminisced about her life and career.

The biographical drama Return to Babylon was filmed between 2001-2003 on rolls of old 16mm film, using a hand-cranked camera. A tribute to and about stars of the 1920s silent movie era, Return to Babylon is a silent comedy scored with popular 1920s music. The movie was shot in and around Hollywood at historical locations that included Villa Talmadge (Norma Talmadge’s home), Falcons Lair (Rudolph Valentino’s home), and the 1920s mansion / home of silent movie star Antonio Moreno and his oil heiress wife Daisy Canfield Danziger.

Years went by and no distributor could be found for the film; Return to Babylon was finally released on YouTube in 2019, below.

Although Tippi Hedren’s appearances onscreen have understandably dwindled in her eighties, the octogenarian actress can be seen most recently starring in the dramatic thriller The Ghost and the Whale (2017) with Jonathan Pryce and Maurice Benard.

Hedren’s daughter Melanie Griffith presented her with a Lifetime Achievement Award in film in October, 2014. Thanks to Melanie’s marriage to actor Don Johnson, Tippi Hedren is grandmother to actress Dakota Johnson (co-star of the Fifty Shades film series). 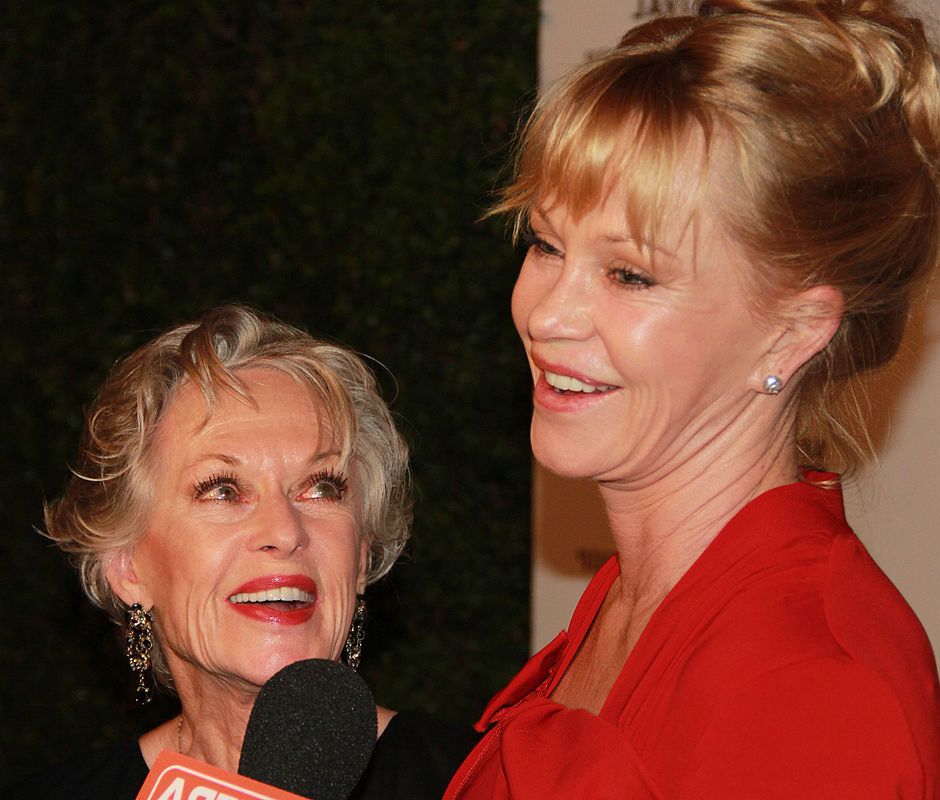 In an acting career that has spanned 7 decades, Tippi Hedren has appeared in more than 80 movies and television shows, and has acquired a family and film legacy to be proud of.

Note: This article was first published in 2015 with the title Celebrating Seniors – Tippi Hedren. It has been updated with new & additional content.