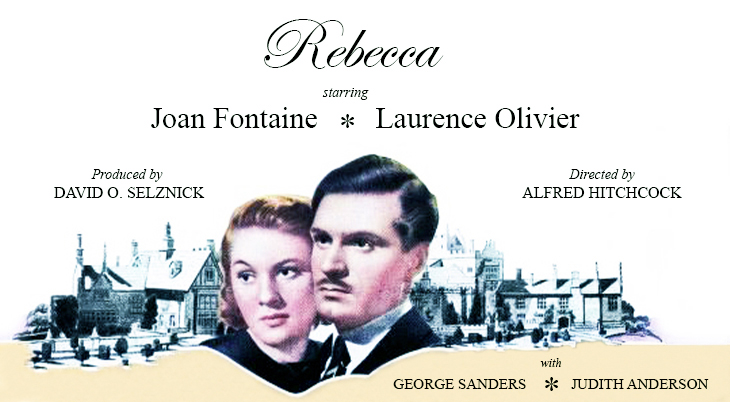 Producer David O. Selznick and director Alfred Hitchcock filmed Rebecca at Selznick International Studios in California, doing location shooting at Big Sur, Palos Verdes, and Point Lobos State Natural Reserve in California, in the fall of 1939. They were both nominated for Academy Awards, and Selznick / Rebecca won Best Picture, against stiff competition from Foreign Correspondent, Our Town, The Grapes of Wrath, The Letter, The Great Dictator, The Long Voyage Home, The Philadelphia Story, All This, and Heaven Too, and Kitty Foyle.

The movie opens at Monte Carlo on the French Riviera, with a shy, naive paid companion (Joan Fontaine, sister of Olivia de Havilland) catering to Mrs. Edyth Van Hopper (Florence Bates), a rich socialite. The companion (her first and maiden name are never given, in the book or in the movie) is soon spotted by wealthy English widower Maxim de Winter (Laurence Olivier), who sweeps her off her feet and marries her. 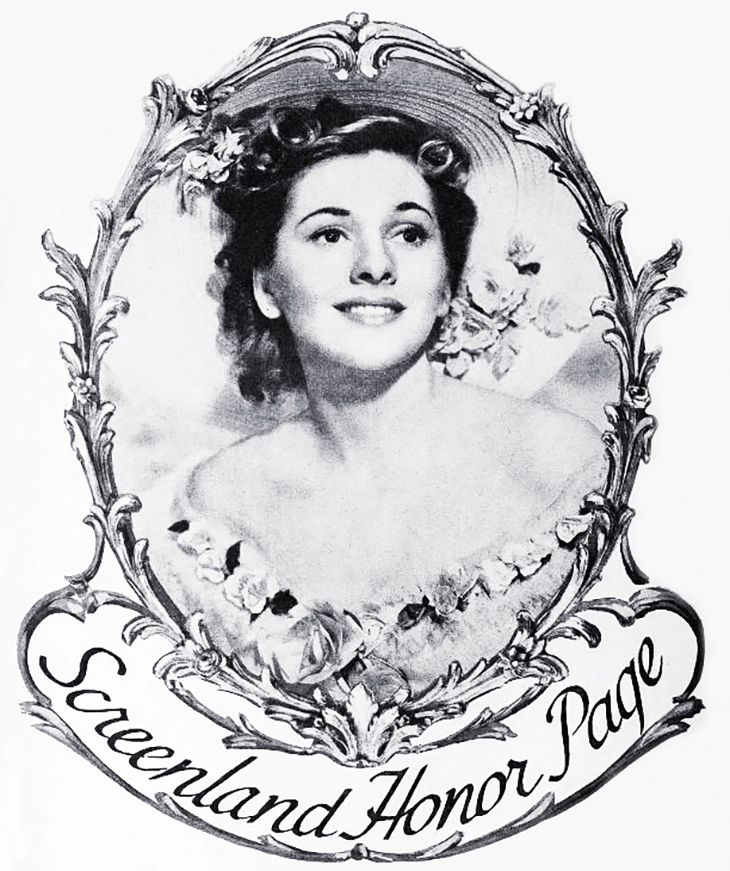 Maxim takes his new bride, the second Mrs. De Winter, back home with him to Manderley, his sea-side mansion. They are greeted by the snooty housekeeper Mrs. Danvers (Judith Anderson).

Mrs. Danvers takes every opportunity to undermine any confidence the new Mrs. De Winter might have, by constantly implying that Maxim’s dead first wife Rebecca was a superior hostess, wife, employer, etc. She goads the young bride into holding a lavish costume ball and wearing a dress identical to one that Rebecca had worn. Maxim blows up at his wife when he sees her in the dress. Mrs. Danvers is almost successful in persuading the upset woman to jump out the window, when news of a shipwreck interrupts their intense conversation.

The shipwreck reveals the body of Rebecca, and afterwards, Maxim reveals even more to his new wife. He actually hated Rebecca, who was promiscuous throughout their marriage; one of her affairs had been with her cousin Jack, and she had become pregnant. Maxim and Rebecca had argued, she had fallen and hit her head and died; Maxim rowed her body out to sea and sank the boat. A police investigation headed by Colonel Julyan (C. Aubrey Smith) follows the discovery of Rebecca‘s body, and Maxim is suspected of murder. The tension continues to rise to a fiery conclusion. 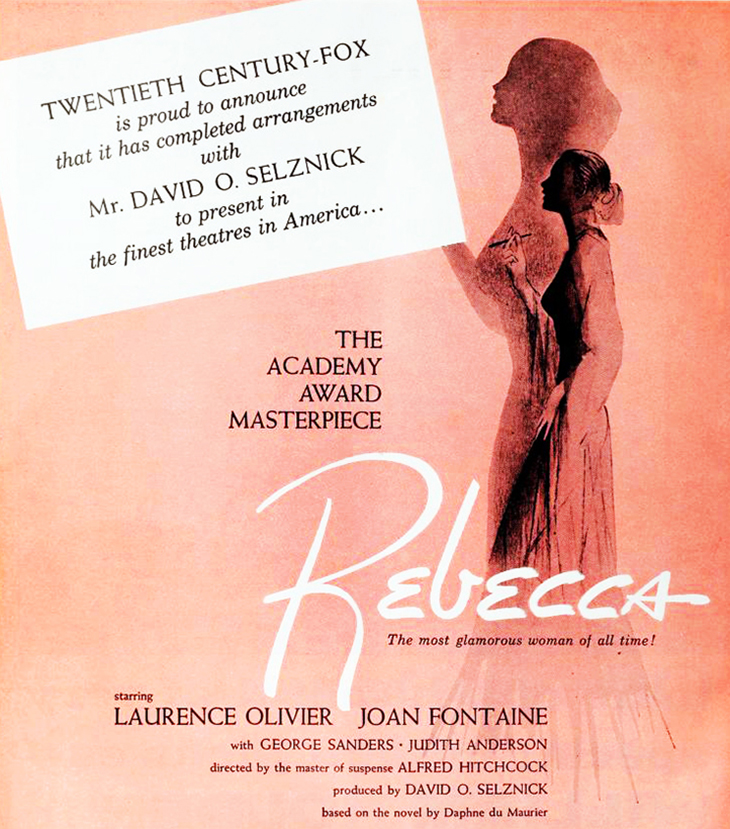 Although both lead actors Laurence Olivier and Joan Fontaine were nominated for Best Actor and Actress respectively, neither won. 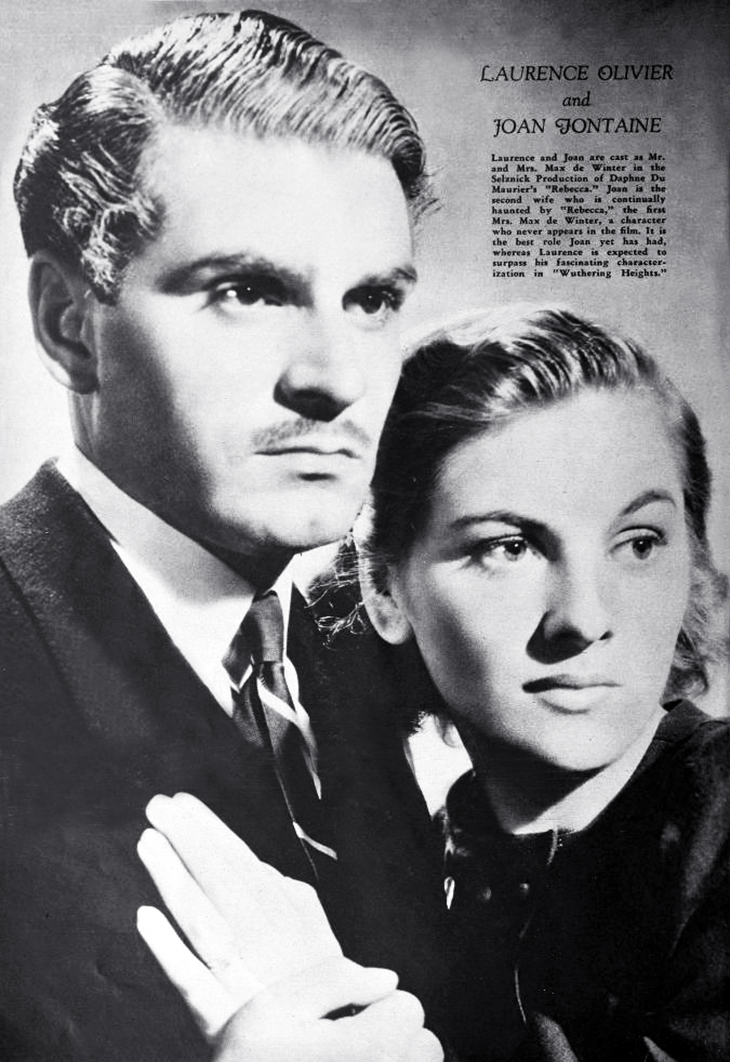 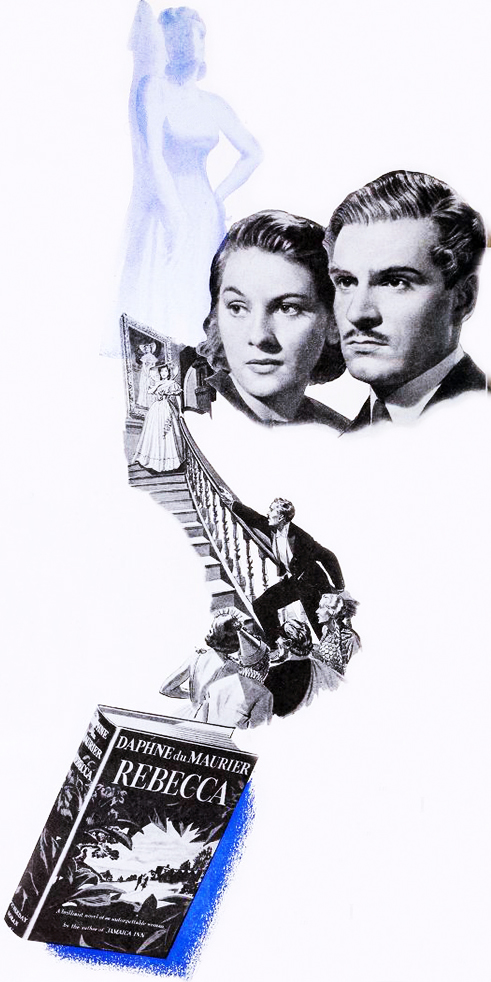 The other, unsuccessful Academy Award nominations for Rebecca:

The 2020 Netflix colour remake of Rebecca boasts beautiful period costumes and an attractive cast that includes Armie Hammer as Maxim De Winter, and Lily James as his second wife, with Kristin Scott Thomas as Mrs. Danvers.

It doesn’t measure up to Hitchcock’s original production for gothic tension, and Hammer isn’t as compelling as Laurence Olivier, but then who could be?

Despite the passage of over 80 years now since it was first released, the 1940 Rebecca is the more highly rated of these two films today.

They’re both worth watching, but don’t watch the original late at night in the dark, unless you have a chair to hide behind when the tension gets to be too much.

Nazi Germany invaded Denmark and Norway on April 9, 1940 as the opening salvo of World War II‘s Operation Weserübung, despite having signed a non-aggression pact with Denmark less than a year previously, and Norway’s neutral stance. 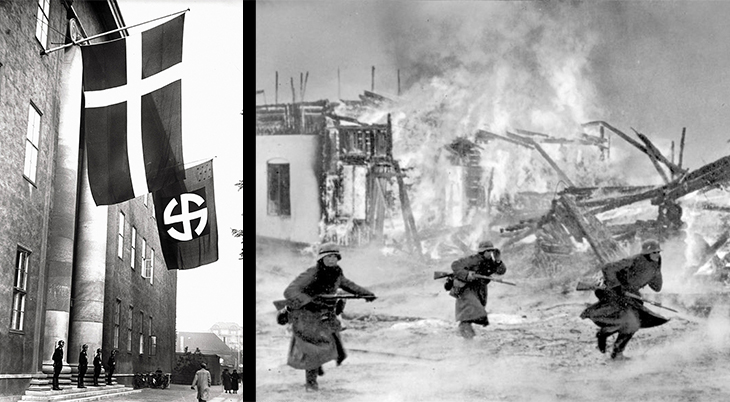 Denmark had limited military equipment and troops, and was targeted by Germany as a stepping-stone to taking adjacent Normandy. 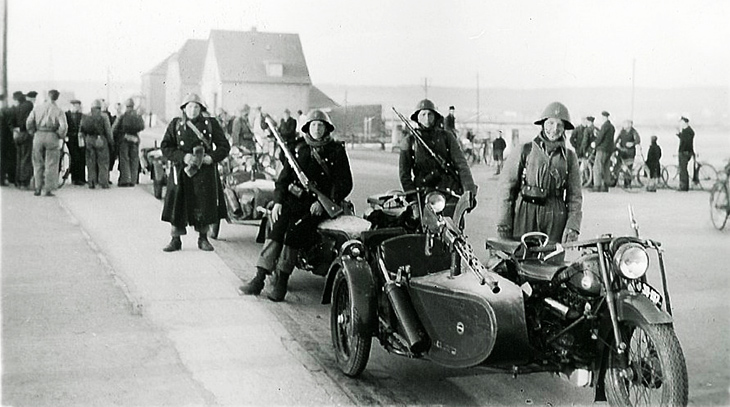 After two hours of fighting on April 9, 1940,  the Danish Prime Minister ordered the troops to stop fighting, to prevent Copenhagen from being bombed. Queen Margrethe II of Denmark (since 1972), was born on April 16, 1940 in Copenhagen, to Denmark’s Crown Prince Christian. 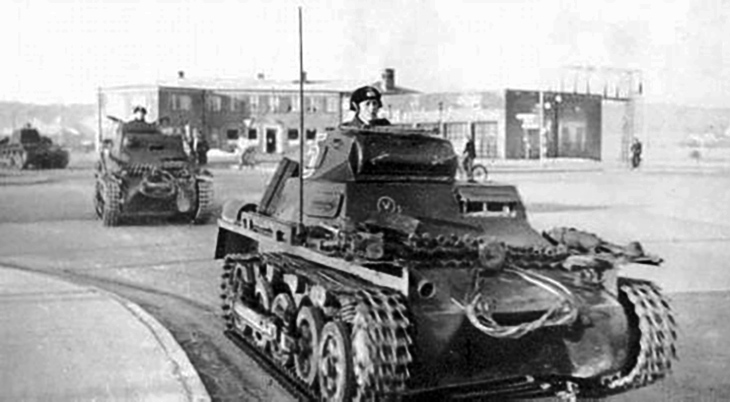 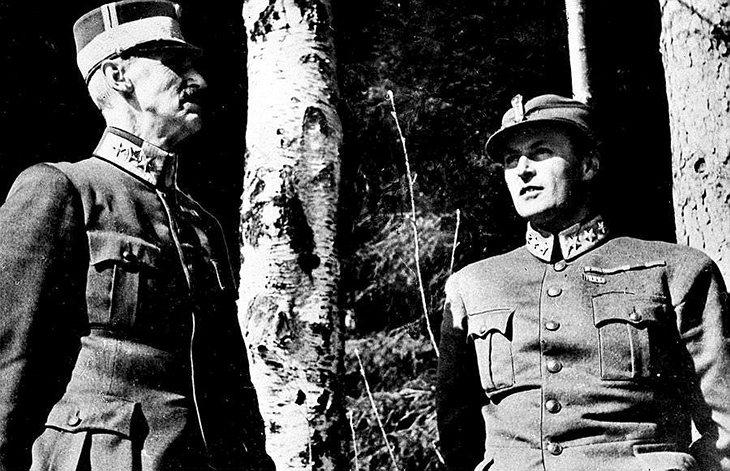 Under bombing by Germany’s Luftwaffe, Norway’s king and elected government escaped north to Molde, where they boarded the HMS Glasgow, a British cruiser. They were taken to remote Tromsø in northern Norway

Norwegian troops fought German forces on sea, air, and land for a couple of months, with some help from allied troops before they withdrew in early June. Under heavy fire and with losses of destroyers and an aircraft carrier, the British cruiser HMS Glasgow evacuated King Haakon, his family, and the Norwegian government officials, and took them to England

Both Danish and Norwegian resistance fighters – both organized larger groups, and small pockets – continued to wage covert war against Nazi occupation during WWII with acts of sabotage, spying, raids, and other undercover operations.

Germany imprisoned roughly 6,000 Danish citizens in concentration camps during WWII. After Denmark was liberated, 40,000 Danish people were arrested on suspicion of collaboration, and 46  were convicted and executed.

During the German occupation of Norway, some of the 80,000 Norwegians who escaped the country, joined Allied forces in Norwegian units. The Royal Norwegian Air Force established the “Little Norway” training base on Toronto Island, Ontario. Approximately 50,000 Norwegians were arrested by Germans, with around 9,000 sent to prison camps outside Norway.

After WWII ended, King Haakon, Crown Prince Olav, and the exiled cabinet returned to Norway. Post-war trials of Germans and Norwegian Nazi collaborators resulted in 37 executions, including that of Vidkun Quisling.

Producers and directors of the series included Mark Goodson (c. 1946-1949), who would be come more famous later on for producing highly successful television series. 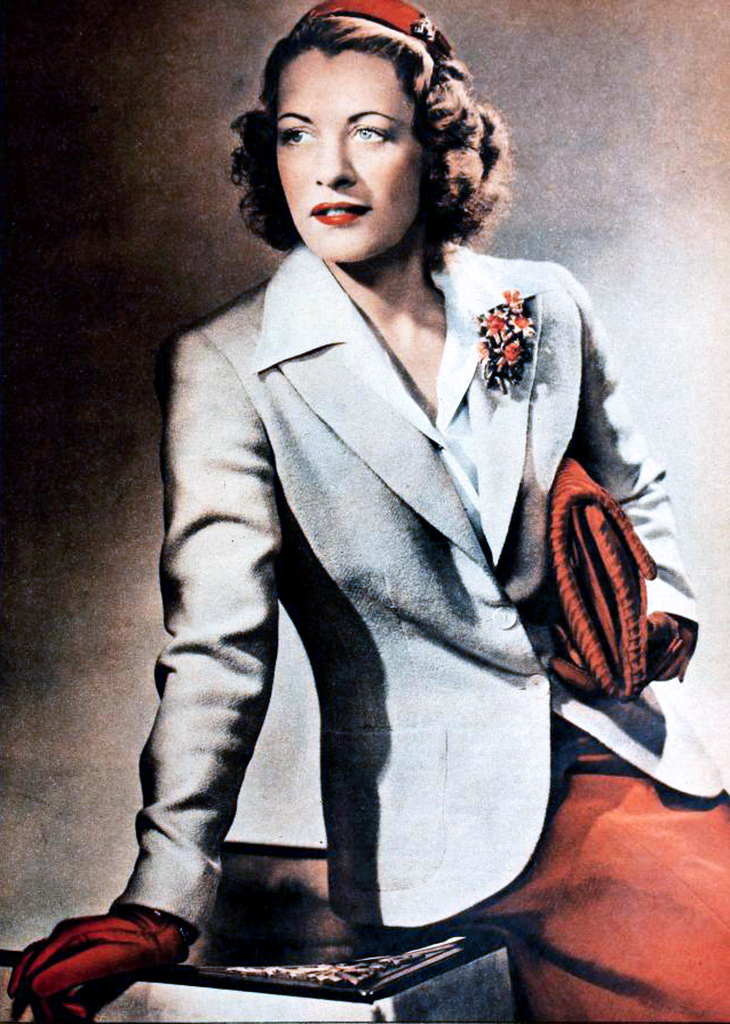 The only exception to Lucille Wall in the role came in 1948, when Radio and Television Mirror reported that she been recuperating for three months after slipping against the open door of her refrigerator; Wall ended up with a skull fracture and serious concussion. Anne Seymour played Portia during Wall’s absence. Born on January 18, 1898, blonde, blue-eyed 5’7″ Lucille was a graduate of the American Academy of Dramatic Arts. She was a veteran of Broadway and radio by the time she began starring as Portia. 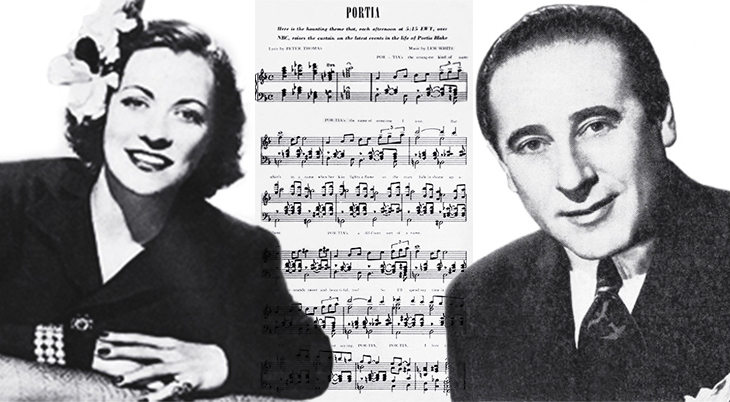 In January 1941, Broadcasting reported an experimental tie-in of characters from radio soap opera Young Dr. Malone (which also began airing in April 1940) making crossover appearances on Portia Faces Life, a promotional gimmick that would become more common on radio and television during the 1950s.

Twelve-year-old actor Alastair Kyle (Dickie c. 1943) had a unique gift, according to Radio Mirror: “After listening once to the sound of the genuine original accent, he can reproduce it perfectly, and to date, has mastered French, German, Polish, Japanese, Chinese (and they are different, these two), Russian and Italian.”

Local newspaper reporter Walter Manning (Myron McCormick 1940-1942; Bartlett Robinson 1943-1951; Robert Shayne c. 1945) had long harbored a secret crush on Portia that he believed was unrequited. Feeling guilty after an accident in which Arline Harrison, the daughter of his boss at the newspaper, is injured, Walter marries Arline. Arline’s jealousy makes difficulties for Portia, especially when Bryan Harrison dies suddenly without a will, and the court appoints Walter and Portia as co-administrators of his estate.

The scripts of Portia Faces Life reflected the impacts of WWII as the series progressed. Walter Manning becomes a foreign correspondent; his letters home reveal he joins guerrilla forces to help the Allies against the Nazis. Walter gets shot by the Nazis in the Balkans and is believed dead; he continues to work with the guerrillas against the Nazis. A heartbroken Portia is on the brink of marrying Dr. Stanley Holton (who is under the thumb of corrupt town slumlord owner John Parker, played by Bill Johnstone), but  when she goes to see Holton, she finds him dead. 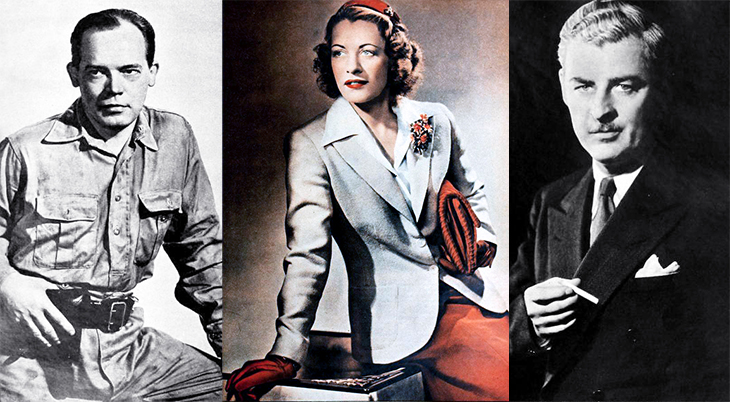 Portia is discovered beside Holton’s body by John Parker, who accuses her of murder and tries to blackmail her into dropping her charges against him. 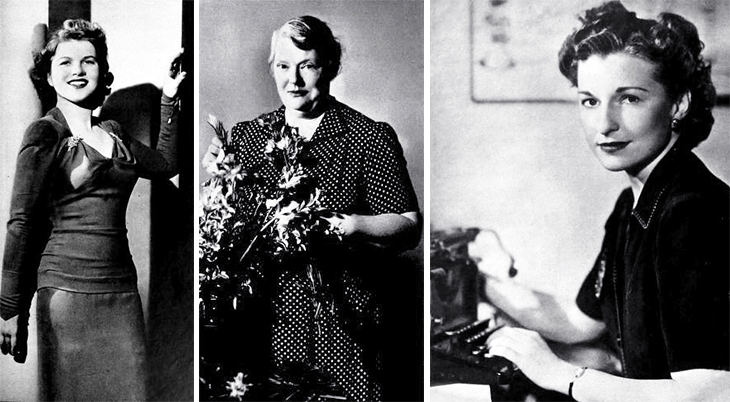 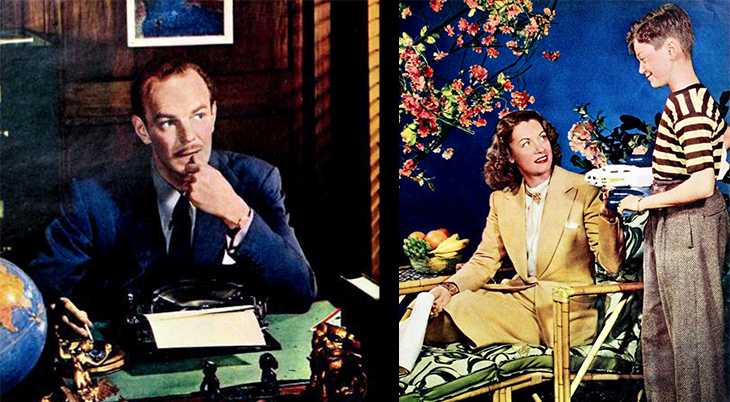 Over the thirteen years that Portia Faces Life was on the air, Radio and Television Mirror magazine ran several serial stories based on the programs storyline, including Paying Our Way (1945), To the Girl I Love (1946), Portia Blake Settles a Point of Law (1947), Portia Faces Life (1948), I Take Thee by Helen Christy Harris (1949), The Silent Challenge (1950), and Walter Returns Home (1951).

Variety (May 30, 1951) reported that General Foods had stopped sponsoring Portia Faces Life the previous week. Portia Faces Life left the airwaves on a cliffhanger in July 1951, as Portia (now married to Walter Manning) has been accused of bribing a witness, with a framed case successful enough to send her to prison. (Radio Television Mirror, July 1951).

Portia Faces Life star Lucille Wall continued to be heard on radio as a freelance actress and regular; she was Belle on Lorenzo Jones during and after Portia, and went on to star on Valiant Lady as Joan Scott in 1952. From 1963-1976, she played Lucille March Weeks on TV’s General Hospital soap opera. Lucille Wall was 87 when shed died in July 1986.

Other actors who could be heard on the series over the years included Joyce Hayward, Skip Homeier, Ben Cooper, Eunice Howard, Anne Francis, and Cynthia Stone (Mrs. Jack Lemmon).

An Australian version of the Portia Faces Life radio series ran from 1952-1970.

From 1954-1955, actress Frances Reid portrayed Portia Blake Manning on a TV version of Portia Faces Life. Bartlett Robinson was originally scheduled to reprise his role of Walter Manning, but instead Donald Woods debuted as Walter; by November, Karl Swenson was playing the role. The cast included Jean Gillespie as Dorrie Blake, Mark Miller as Tony Faraday, Mary Fickett as Ruth Byfield, and Patrick O’Neal as Karl Manning. The TV series faltered in the ratings and in a last-ditch effort to save it, was renamed The Inner Flame in June 1955. By the end of August, The Inner Flame was cancelled.

CBC announced plans to pilot 5 episodes of a new Portia Faces Life TV show in 1959; it never came to pass.