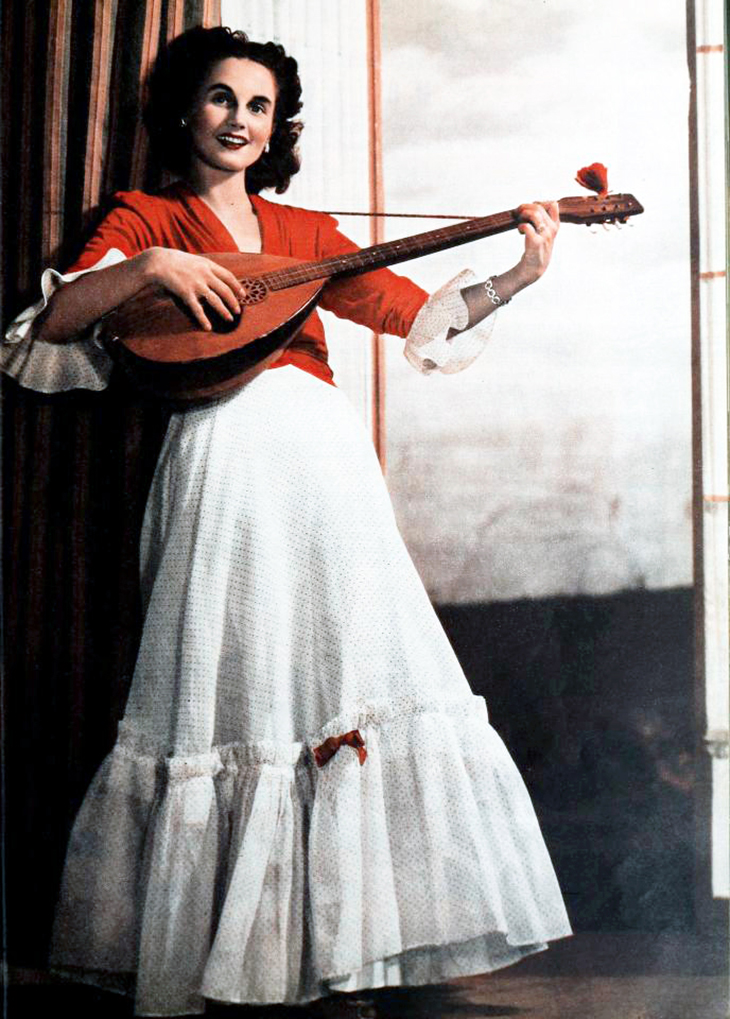 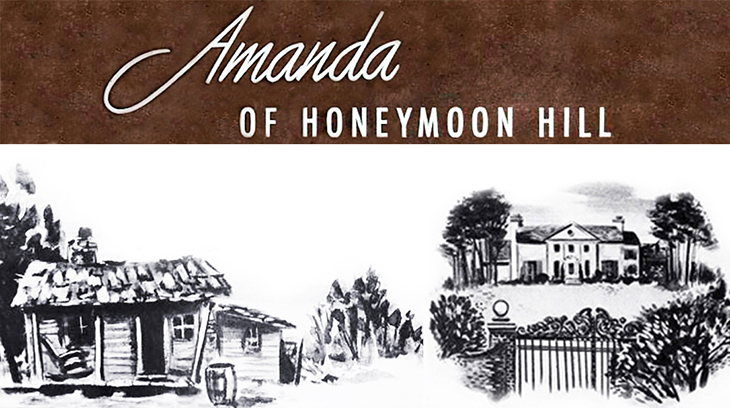 Charity Amanda Dyke Leighton was played throughout the series run by Joy Hathaway (nee Joy Hathaway Meeker), and Edward Leighton was played at different times by actors Boyd Crawford, Winston O’Keefe, George Lambert, James Meighan, and Staats Cotsworth. Frank Gallop was the announcer for most of the serial, but George Ansbro, Bill Bond, Howard Claney and Hugh Conover also took a turn at announcing for Amanda of Honeymoon Hill during the seven years it was on the air, from February 1940 through April 1946.

Radio and Television Mirror serialized the story of Honeymoon Hill in the fall of 1941, complete with these photos and illustrations. 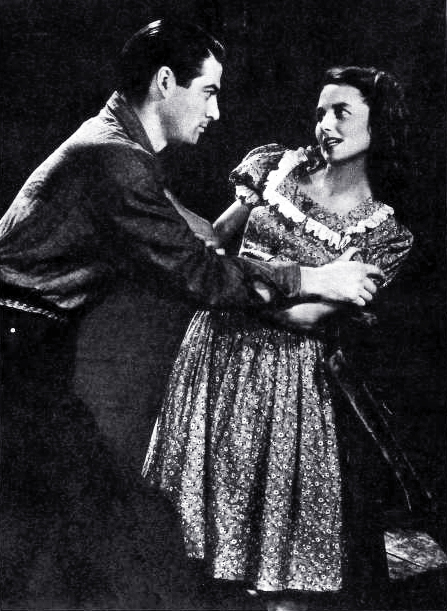 She meets handsome, wealthy Southern artist Edward Leighton (Boyd Crawford) who lives in the big shining white house – Honeymoon House – on the hill, that Amanda has admired from her humble cabin down in the valley.

Amanda tells her old Aunt Maisie (Florence Edney) about Edward, and Aunt Maisie warns her about associating with “outlanders” (anyone who doesn’t live in the valley).

Aunt Maisie tells her that although the Leightons might have been wealthy tobacco farmers in the area for years, the Dyke’s were in Virginia before them. Edward comes looking for Amanda, but Aunt Maise tells him she never heard of a local red-haired girl, and he leaves. Amanda’s father comes to take her home from Aunt Maisie‘s, and tells her that he won’t stand for her seeing an outlander – she’s got to marry Charlie.

Amanda runs away again, this time to Edward‘s studio. Edward paints her portrait while he tells her about his family – his mother Susan Leighton (Irene Hubbard), his sister, and his uncle, Colonel Bob Leighton (John Connery).

Sylvia Meadows (Helen Shields) walks in on them, and explains to Amanda that there is a dance the next evening to announce Sylvia‘s engagement to Edward. 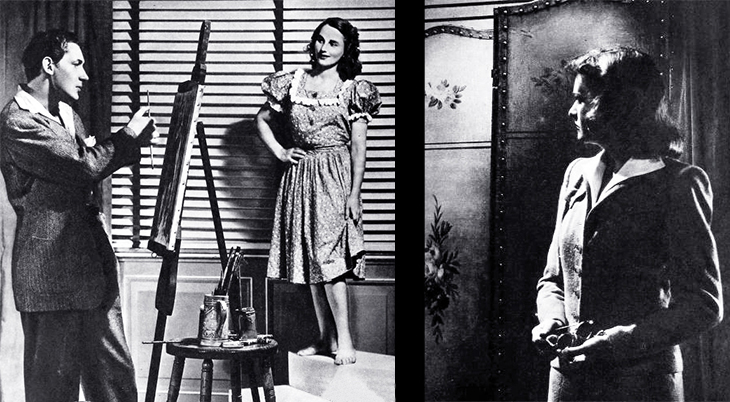 Joseph Dyke crashes the engagement party and drags Amanda back to the valley cabin where he locks her into a bedroom. Jim Tolliver (Jackie Kelk), a young friend of Amanda‘s, tells Edward where to find her, and Edward breaks into the cabin. 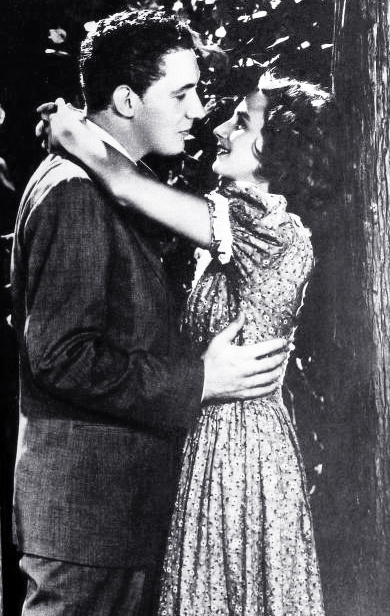 Edward tells Amanda he’s broken his engagement to Sylvia and wants to marry her instead, and takes her to Honeymoon House.

Thanks to Susan Leighton‘s interference the next day, Amanda tells Edward she can’t marry him unless his mother apologizes.

When Edward leaves to find his mother, Amanda takes off back to the valley.

Amanda is preparing to go marry Charlie in the valley when Edward shows up, and they run off together.

More obstacles – such as Amanda’s ability to write her name – are overcome before they are finally married and live in Honeymoon House on the hill. 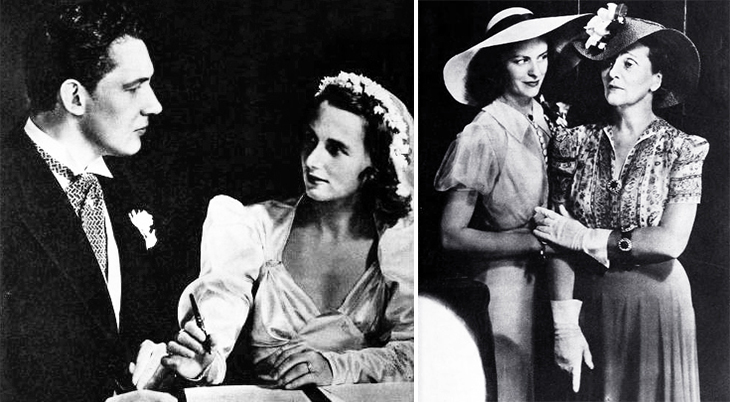 In the following years, Amanda educates herself, and she gives birth to their son Robert “Bobby” Elijah. When World War II breaks out, Amanda stays behind to supervise a daycare for the children of local war workers, while Edward leaves to run his factory in Abbeyville.

World War II disrupted the cast of Amanda of Honeymoon Hill off the air as well. Variety reported that actor Winston O’Keefe (then playing Edward), enlisted in the Army and left February 16, 1942 for duty with a cavalry unit in Ft. Riley, Kansas; George Lambert took over the role of Edward. A few months later, playwright-actor John Monks Jr. left the series to join the Marine Corps in June 1942.

Edward‘s big Honeymoon House estate on the hill is lost when his fortunes turn. Amanda takes a job at the Foster Aircraft Company to help support her family.

In 1944, Variety reported that co-incident with the setting of the show changing to Washington from Virginia, Air Features also changed the title of the show, shortening it to Amanda. 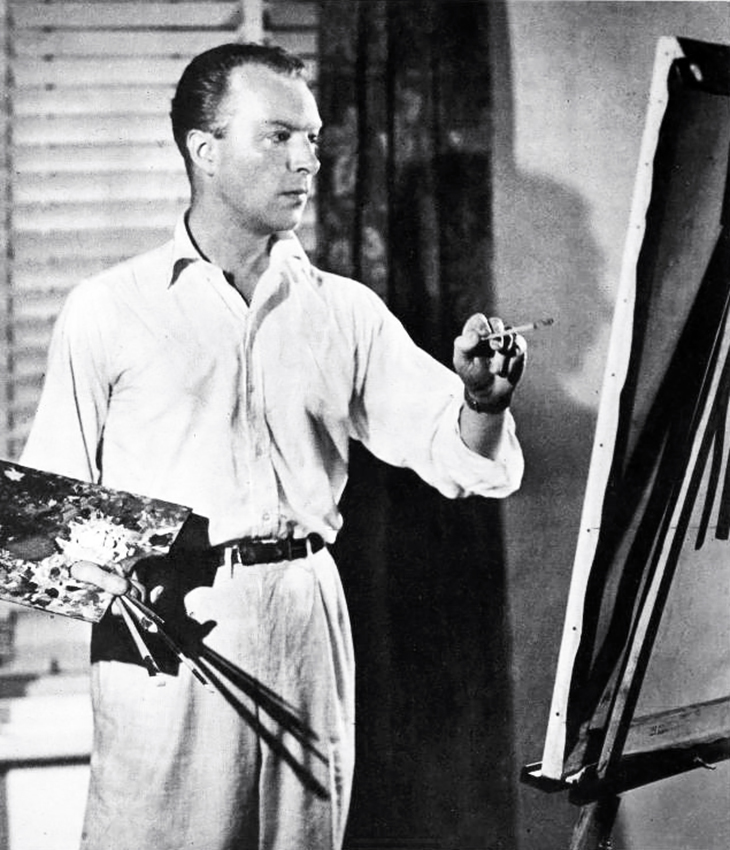 Edward has been discharged from the Army and is finding it difficult to adjust to civilian life. He continues painting and brings home Irene Miller (Elizabeth Eustis) to act as his model. 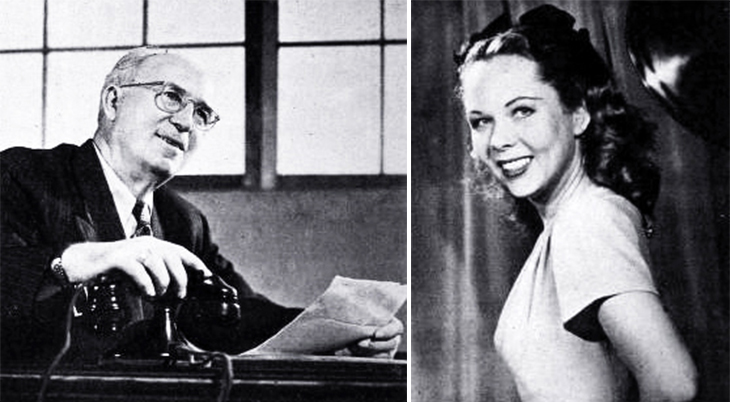 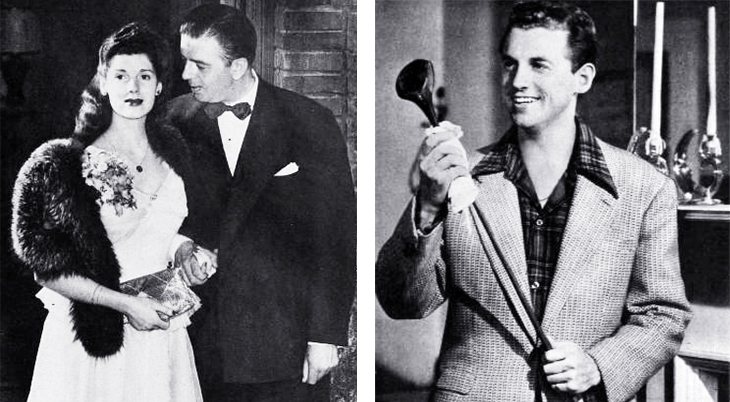 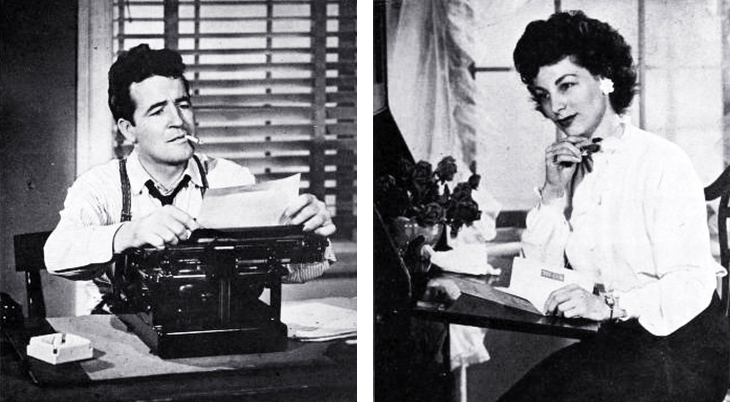 Newspaper reporter Ralph Daly (Paul Conrad) is a friend of the Leightons, despite his ability to make trouble for them, while Amanda‘s friend Jean Curtis (Evelyn Juster) offers her encouragement and advice on being a working woman. 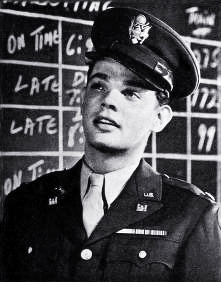 Some “name” actors of radio, stage, and movies, that took took turns behind the mike for Amanda of Honeymoon Hill were Arlene Francis, John McGovern and Selena Royle in 1943, Carl Benton Reid in 1944, actor and future director Lamont Johnson as the Leighton’s close friend in Washington, Major Bruce Douglas (1945).

Joy Hathaway Meeker was born in British Columbia, Canada on January 13, 1913. The Meeker family lived in Merritt, B.C. while Joy was growing up, and she attended the University of B.C. Joy became a teacher in Merritt, and stayed there when her family moved to Pitt Meadows. 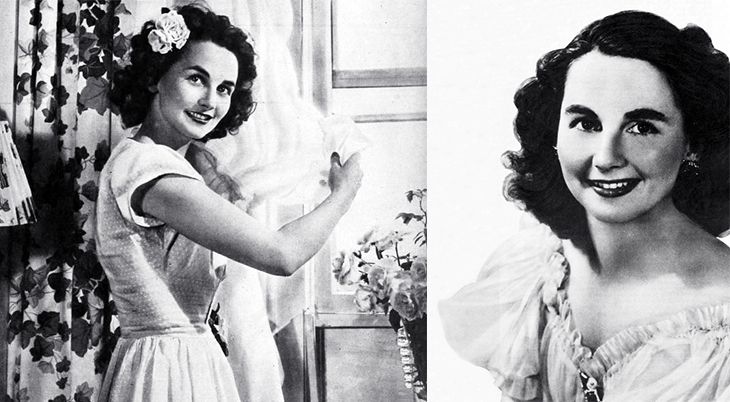 By 1935, she was using Joy Hathaway as her professional name, and had moved into a a brownstone apartment on Beekman Place with friends – film actress Martha Scott and fashion model Vicky Abbott. She had already found periodic work on radio, and begun appearing on Broadway stages in operettas and plays – A Slight Case of Murder (1935).

In 1937, Joy toured schools as part of a promotion by Loew’s Publicity for the release of the film Romeo and Juliet (1936), starring Norma Shearer and Leslie Howard. Motion Picture Herald noted her ancestry (real or made up?) as,

Joy played usherette actress Helen Hayes in George S. Kaufman and Moss Hart’s play The Fabulous Invalid (1938), about the life of a Broadway theatre between 1900-1930 (Variety), and was in The Women that year as well. 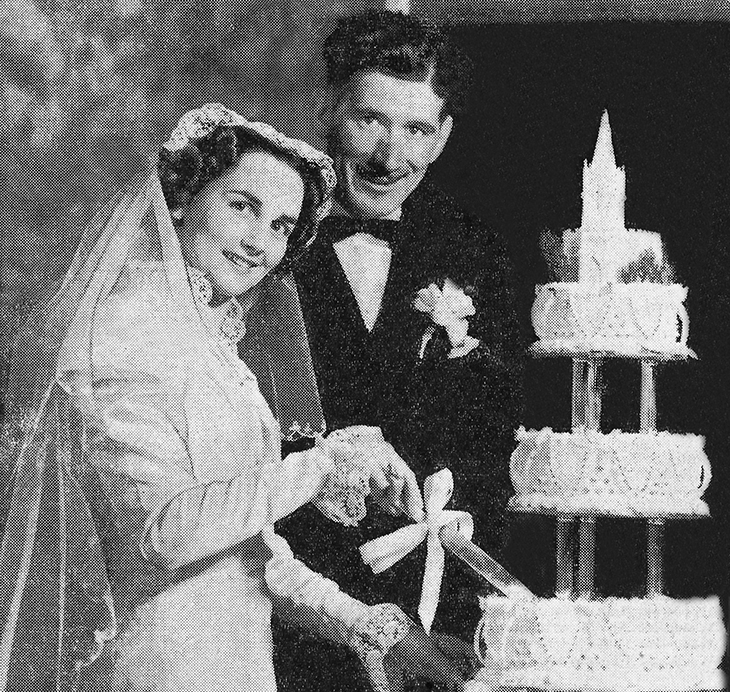 She married violinist, author, and composer Charles Francis Kenny (songwriter of Love Letters in the Sand with his brother, poet and newspaper columnist Nick Kenny) in June 1939 at her parent’s home in Pitt Meadows. 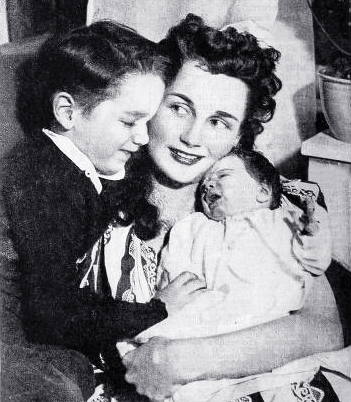 Tragically, both Joy Hathaway and her infant daughter Zo-Anne contracted pneumonia in October 1954; Joy passed away at the age of 41 just 3 days after her daughter died. Joy’s obituary in The Bridgeport Telegram  noted she was survived by her husband Charles Kenny (by then an assistant radio-tv editor at the New York Daily Mirror) and their three sons in Connecticut, and her mother Bessie Meeker and three brothers Townsend, Henry, and George, in Vancouver. Charles F. Kenny died in 1992.

*Images are believed to be in the public domain and sourced from Radio Mirror, Radio and Televison Mirror, or Radio Romances, unless otherwise noted*