Barry Gibb’s story and 8 top songs: New York Mining Disaster 1941, To Love Somebody, Massachusetts, Words, I’ve Gotta Get a Message To You, I Started a Joke, Lonely Days, How Can You Mend a Broken Heart. Below, Robin and Barry Gibb of the Bee Gees on This is Tom Jones, with drummer Colin Petersen in the background. 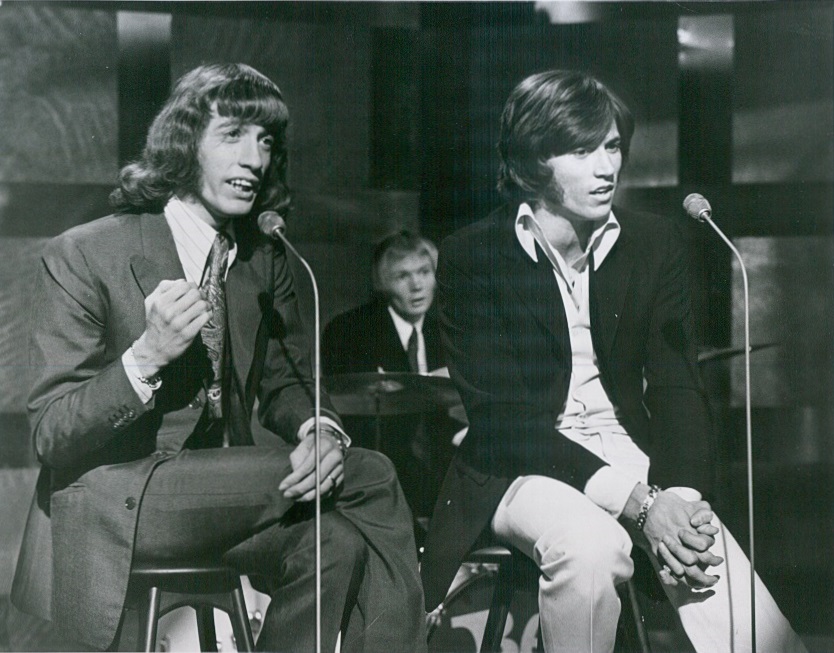 Newest septuagenarian senior citizen, baby boomer, and prolific singer-songwriter Barry Gibb was born on September 1, 1946 in Douglas, on the Isle of Man in the U.K. Musicians in Gibb’s family included his drummer father Hugh Gibb, and his younger brothers – twins Robin Gibb (1949-2012) and Maurice Gibb (1949-2003), and youngest brother Andy Gibb (1958-1988).

A severe scalding from a teapot when he was a toddler landed Barry Gibb in hospital for two years, recovering from burns.

By the end of 1955 the Gibb family had moved to Manchester, England and Barry was given a guitar for Christmas. 9-year-old Barry and his 6-year-old twin brothers Robin and Maurice began singing harmonies in 1955 and turned to covering popular rock and pop tunes. Their first paying gig 2 years was in December 1957 at the ripe old ages of 11 and 8. The brothers performed under the group names The Rattlesnakes, and Wee Johnny Hayes and the Blue Cats.

Musical influences for Barry Gibb during his childhood and pre-teen years were The Everly Brothers, Paul Anka, Cliff Richard, Frankie Valli, and Roy Orbison, of whom he said that when he heard Orbison sing Crying, “To me that was the voice of God.”

The Gibb family emigrated to Australia by boat in August 1958, and the brothers Gibb changed the name of the band to the Bee Gees. 13-year-old Barry Gibb began writing his own songs.

By the end of September 1961, Barry Gibb had quit school at the age of 15, and the Gibb family had moved from Redcliffe to the beach resort town Surfers Paradise on Australia’s Gold Coast. The Bee Gees performed at hotels and clubs on the Gold Coast for a couple of years.

The Gibb family moved to Sydney, Australia early in 1963, around the time the Bee Gees were signed to their first recording contract and released some singles, which charted in the top 100 in Australia.

By 1966 Barry Gibb’s songs had been recorded by The Bee Gees and other Australian recording artists. The Bee Gees singles Spicks and Specks (1966) with I Am the World on the B side, written by Barry Gibb, was released in September 1966 and made it to #5 in Australia. Barry had met an Australian girl named Maureen Bates while the Gibbs were in Sydney. 19-year-old Barry Gibb and girlfriend Maureen Bates got married on August 22, 1966, just before his 20th birthday. 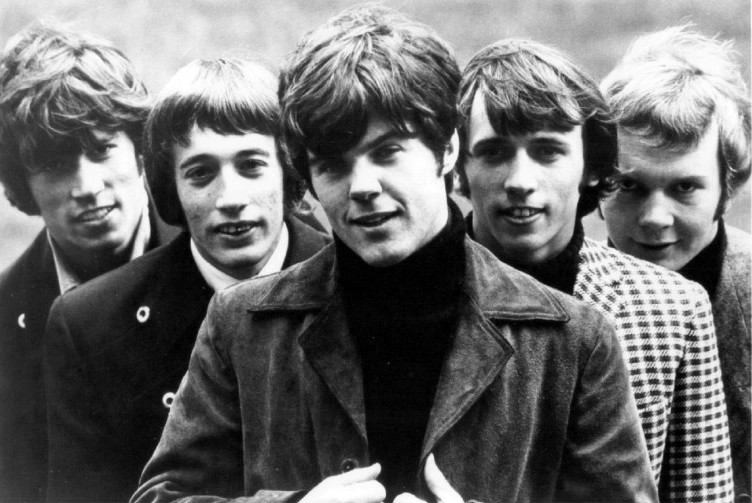 Barry & Maureen Gibb, Robin and Maurice sailed to England in January 1967 and were promptly signed to a contract with the Robert Stigwood Organization, with Robert Stigwood acting as their manager. The album Bee Gees’ 1st (1967 ) was released in July 1967 and contained the three Top 20 singles Holiday, To Love Somebody and New York Mining Disaster.

To Love Somebody (1967) was originally written by Barry Gibb and Robin Gibb for Otis Redding at the request of their manager, Robert Stigwood. In a 2011 interview with Mojo magazine, Barry Gibb said of writing To Love Somebody that,

“It was for Robert. I say that unabashedly. He asked me to write a song for him, personally. It was written in New York and played to Otis but, personally, it was for Robert. He meant a great deal to me. I don’t think it was a homosexual affection but a tremendous admiration for this man’s abilities and gifts.“

Holiday (1967) was written by Barry Gibb and Robin Gibb, who shared lead vocals on the song. Recorded at the same time as To Love Somebody in March 1967, when released in the United States in September 1967 Holiday went to #16 on the U.S. charts.

On September 21 1967, the Bee Gees taped an episode of Top of the Pops for the BBC, and Barry Gibb met 17-year-old Linda Gray, Miss Edinburgh. They had an immediate tryst and Barry invited Linda to a party at Robert Stigwood’s house to celebrate the success of Massachusetts becoming their first #1 single in the U.K.

At the beginning of December 1967, Barry Gibb’s marriage to Maureen and their recent separation came to light in the press; until then, it had been kept secret, with Barry denying he was married. In the biography The Bee Gees: Tales of the Brothers Gibb (2000) by Hector Cook, Melinda Bilyeu, & Andrew Mon Hughes, Barry said he kept the marriage secret because he didn’t want to spoil his image, and is quoted as saying

“The reason we split up was, I suppose, 50-50 between us. The kind of person I am – obsessed with my career – it runs my whole life…I could not have taken her with me as a girlfriend because if we had split up over here, she would have been on her own, so we got married 3 months before we left and that was the biggest mistake I ever made in my life…After we arrived in Britain, I was working most nights and she would hardly ever see me.” Barry said that he and Maureen were incompatible and it took just over a year of marriage before he walked out.

Meanwhile, the stress of Barry Gibb’s disintegrating marriage was beginning to wear on him. On December 23, 1967, Barry and Robin Gibb flew to Australia and were overwhelmed by attention from the Australian press. During a stopover in Turkey on the very long return flight back to England after Christmas, both Robin and Barry checked into a hospital and were told they were suffering from mental and physical exhaustion.

In January 1968, the Bee Gees took a promotional trip to the U.S. and appeared on both The Smothers Brothers Show and the The Ed Sullivan Show. Success was taking its toll and the group were beginning to be at odds with each other on and off stage over their musical direction.

Barry’s girlfriend Linda Gray eventually moved from Scotland to England, and moved in with Barry.

The hit single Words (1968) was written by Barry, Robin, and Maurice Gibb and recorded in October 1967. After it’s January 1968 release, Words went to reached #15 in the United States. Below, the Bee Gees singing Words live on The Ed Sullivan Show for their baby boomer fans, with Barry Gibb on lead vocals.

By the end of 1968 Robin Gibb had married Molly Hullis; they had two children- son Spencer (b. 1972) and Melissa (b. 1974). Robin and Barry Gibb had taken turns singing lead vocals for the Bee Gees, but Barry got more attention from the press because of his looks, and his leadership of the group became a source of friction. In March 1969 Robin Gibb quit the Bee Gees to go solo.

Barry and Maurice released a Bee Gees single before announcing the band’s break up in December 1969.  Barry co-wrote and produced songs with Samantha Sang during their break, and newlywed Maurice (he’d married pop singer Lulu in February 1969) released a solo single.

Barry and Maureen’s divorce was finalized in July 1970. On September 1, 1970, Linda Gray and Barry Gibb were married in Caxton Hall on his 24th birthday. Highlights form Linda and Barry Gibb’s 1970 wedding courtesy of British Movie tone, below.

With their solo careers fizzling, the brothers Gibb reunited in August of 1970 and began writing songs again. They wrote two songs in their first writing session together that would make it to the Top 3 in the U.S. – Lonely Days (1970), and How Can You Mend a Broken Heart (1971).

Both songs are suggestive of the feelings of the brothers while the Bee Gees had been broken up. The Bee Gees have said the ballad Lonely Days was written in 10 minutes by Barry, Robin, and Maurice Gibb. They recorded Lonely Days on August 21, 1970 and when it was released in November 1970, it became a #3 hit single in the U.S. The Bee Gees performed Lonely Days on The Tonight Show Starring Johnny Carson, The Johnny Cash Show, The Andy Williams Show, The Dick Cavett Show, and The Ed Sullivan Show. Below, the Lonely Days music video.

How Can You Mend a Broken Heart (1971) written by Barry Gibb and Robin Gibb and recorded in January 1971, gave the Bee Gees their first #1 hit single in the U.S. when it was released in May 1971.

Over the next several years in the early 1970’s, the Bee Gees continued to record and release albums and singles, but failed to crack the Top 15 in the U.S. 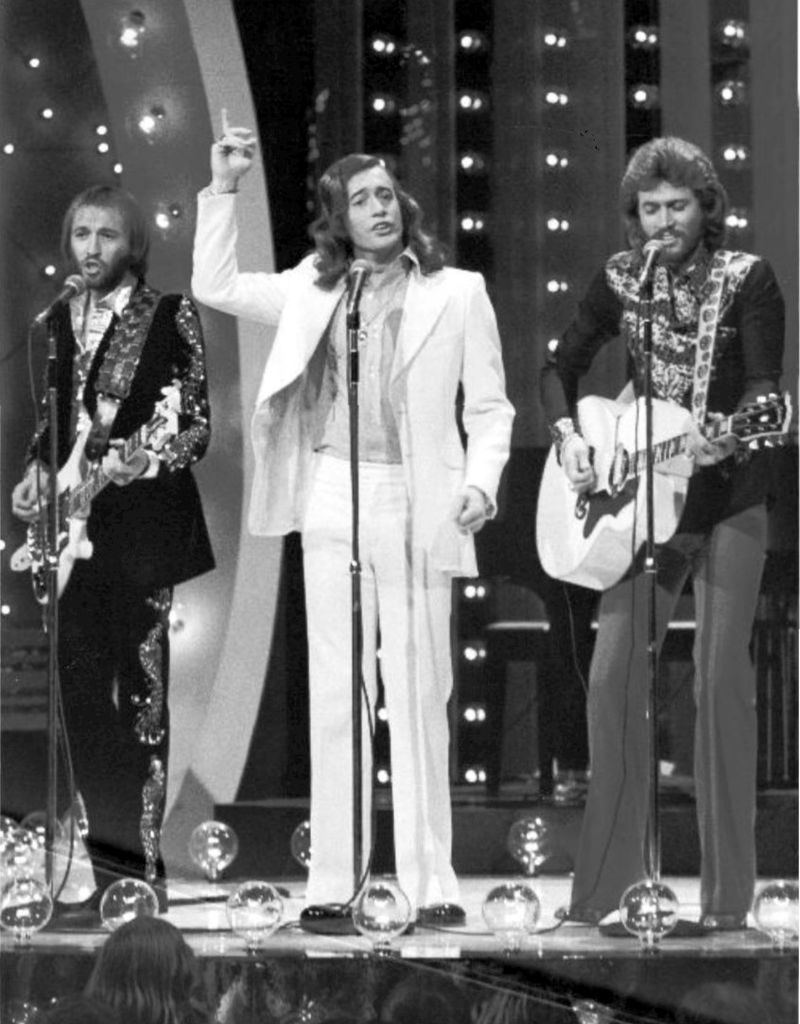 Maurice Gibb’s marriage to Lulu unraveled due to their separate careers and his heavy drinking; they divorced in 1973. Maurice married Yvonne Spenceley in 1975, and they had two children – son Adam Gibb (b.1976) and daughter Samantha Gibb (b.1980)

Bee Gees manager Robert Stigwood arranged for them to work with Atlantic records producer Arif Mardin in Miami in 1974. The Bee Gees toured the U.S. and England that year, playing smaller clubs and venues. They were ready for their next big break.