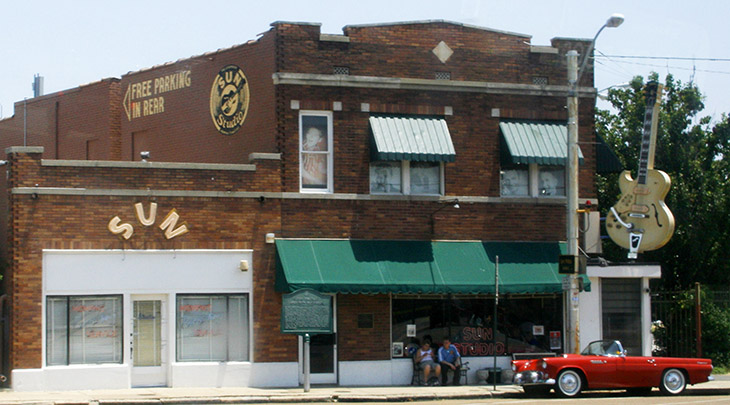 Phillips had launched the Memphis Recording Service studio two years earlier in the same brick building, in February 1950. Phillips had already recorded Howlin’ Wolf and other rhythm & blues artists, but he went on to record greats from the genres of hillbilly, gospel, and country.

The Sun Records company label was bought by Shelby Singleton in 1969 and moved to Nashville, where it since mostly has focused on re-issues of music vs recording new artists, with a few exceptions. However, the original Sun Records building on Union Avenue in Memphis, Tennessee still stands, and is a museum providing history and tours of the building. For more information, check out Elvis in Memphis and Nashville – Graceland, Sun Studios & RCA Records.

On March 21st and March 22, 1952, 31 tornadoes devastated the Southern United States – Arkansas, Tennessee, Missouri, Mississippi, Kentucky, and Alabama – along the Mississippi River Valley, in the space of 25 hours. 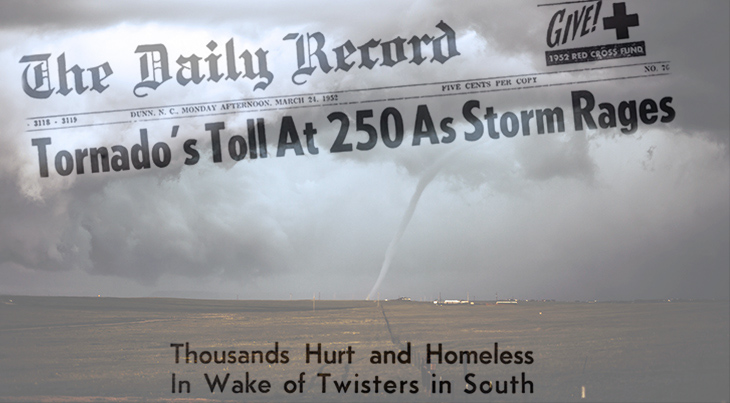 Eleven of the tornados were ranked F4 on the Fujita rating (out of a possible 5). A single tornado in Arkansas caused 50 of the 209 fatalities that occurred during the outbreak. In addition to the fatalities, over 1200 people were injured during the tornados.

“Tornadoes and flood blitzed five Southern States on the Mississippi River with a terrible fury yesterday and left 214 dead and more than 1,000 injured and other thousands homeless. Rainstorms swirling on the perimeter of the storms flooded creeks and at Scotville, Ky., seven members of one family drowned when their home was washed away…worst hit was Arkansas where the rain and lightning-laced black funnel killed 148. Forty died in Tennessee, eight in Mississippi, 11 in Missouri and seven in Kentucky.”  – Tornado Death Toll Rises to 214; Thousands Hurt and Homeless in Wake of Twisters in South, by the Associated Press, March 22, 1952, The Evening Star 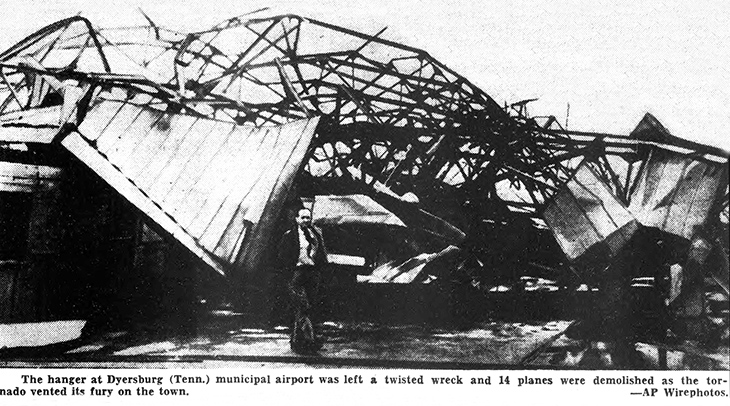 “While the latest death toll of 208 brought a sharp revision downward of earlier counts, some rescue workers feared that additional dead might be found amid wreckage and twisted debris…In one area alone, centered at Dyersburg, Tenn., the property damage was estimated as edging toward $1 million. This huge loss included a quarter of a million dollars worth of property leveled by the high winds and fire at the municipal airport. There, the hangar was demolished, together with the 27 small planes it housed. National guardsmen aided the weary and bewildered populace…

Schools, churches and armories – anything with a roof – were converted into aid stations. Hospitals were filled overflowing as emergency crews of doctors and nurses worked deftly to patch the injured. The Red Cross sent 50 disaster workers, including medical teams, into the 19 afflicted counties.” – New Tornadoes Threaten South; 208 Killed as Storms Spread Havoc across Six-State Region, by the Associated Press, March 23, 1952, The Sunday Star 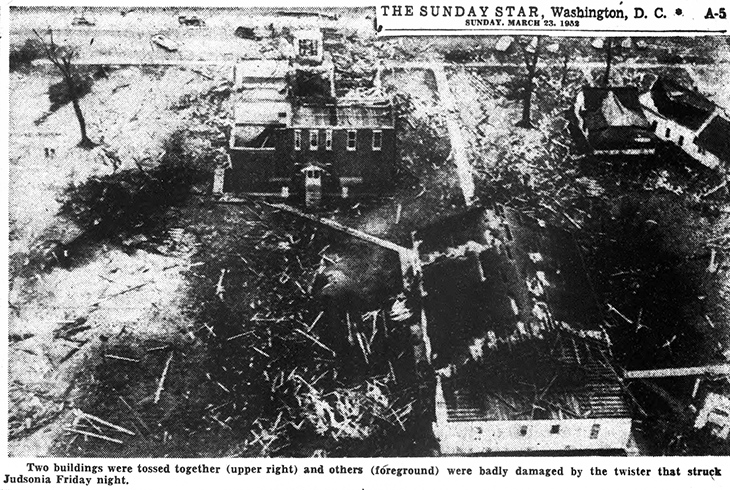 “The tornadoes plunged into Arkansas through ‘Tornado Alley’, given that name because of the frequency of the big winds in the past…Heart of the stricken area was at Judsonia, near Searcy. From there Jack Hogan, Associated Press photographer, reported that half the town was wiped out. From an airplane in which he was making pictures, Mr. Hogan said he could see families grouped around small fires seeking to keep warm. Broken timbers of their homes furnished the fuel….Eyewitnesses at Caruthersville, Mo., said there was rain, thunder and lightning, a terrifying roar, and then silence, just before the storm hit. ” – New Tornadoes Threaten South; 208 Killed as Storms Spread Havoc across Six-State Region, by the Associated Press, March 23, 1952, The Sunday Star

While the true toll of this tornado outbreak wasn’t yet known, by March 24, 1952, the work of recovery was underway.

“Survivors of the disastrous week end picked at what was left of their homes searching for something salvageable, often under the gaze of hundreds of sightseers who jammed the stricken areas. At last count, and it was at best incomplete and oftentimes inaccurate, the death toll stood at Arkansas, 131; Tennessee, 64; Mississippi, 11; Kentucky, 8; Missouri, 16, and Alabama, 5. Arkansas alone reported 711 injured and 1,452 families, thousands homeless, affected by the terrible winds. In basements of churches, schools and armories, Salvation Army and Red Cross workers struggled manfully to feed, house and clothe those left desolate.” – Tornado Region Starts Work of Salvaging Ruins, by the Associated Press, March 24, 1952, The Evening Star

Bestselling Book of 1952: The Caine Mutiny 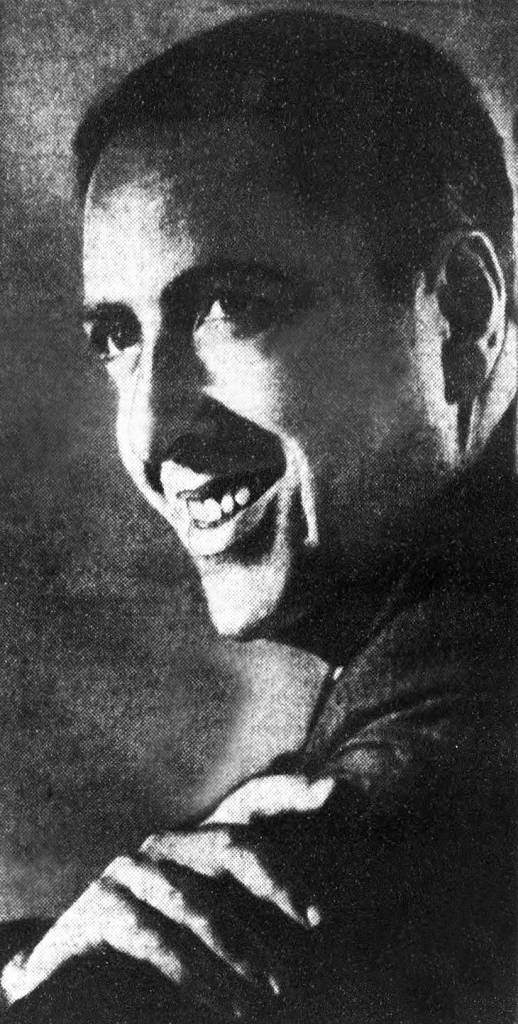 Author Herman Wouk‘s compelling novel The Caine Mutiny had been the #1 best-selling book for 33 weeks by the end of March 1952, according to the New York Times list.

Although knocked off that perch for 8 weeks during April and May 1952 by author Daphne Du Maurier’s novel My Cousin Rachel, The Caine Mutiny bounced back and stayed at #1 through August 1952, definitely making it the #1 best-selling book of 1952.

The Caine Mutiny draws from Herman Wouk’s own life experiences and WWII service on destroyer-minesweepers.

Wouk himself began as an assistant communications officer, rising to first lieutenant, and finally to executive officer, captaining the USS Southard home to the U.S. at the end of WWII.

The well-developed, nuanced characters and situations in The Caine Mutiny are compelling and feel authentic, and today the book is considered a modern classic. 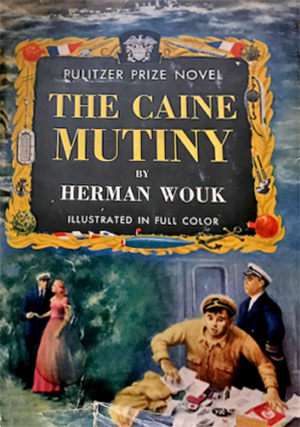 The main character in The Caine Mutiny is recent Princeton grad Willie Keith, who signs on as a midshipman in the U.S. Navy during WWII.

Romantic, family, and work conflicts ensue while an unmotivated and undisciplined Willie undergoes training and begins serving on the USS Caine, a WWI destroyer converted to be minesweeper during WWII.

When Lt. Commander Queeg is assigned to command the USS Caine, he brings discipline and experience as a sailor – but not on this type of ship. Gradually tensions escalate between Queeg, several officers including Willie (now Officer of the Deck), and the rest of the crew, who joke about Queeg being a coward based on his decisions to avoid action.

Communications Officer Thomas Keefer suggests to Lt. Stephen Maryk that Queeg may be mentally ill, and relieving him of his duties could be justified in extreme circumstances. During a typhoon, Lt. Maryk takes over the ship from Queeg, convinced that he is incapable of saving it; Willie and an enlisted helmsman (Stilwell) support Maryk in this action.

Subsequently Maryk is court-martialed, during which process Keefer takes no responsibility for having suggested that Queeg could be relieved of duties, Queeg is found sane, and Maryk is declared unjustified for taking command of the USS Caine. A trial ensues, and Queeg cracks under the pressure of cross-examination by Maryk‘s attorney, Navy Lt. Barney Greenwald. As a result, Maryk is acquitted and charges against Willie are dropped. Keefer publishes a book and is denounced as a coward by Greenwald.

As the end of WWII nears, Keefer is now the Captain of the USS Caine, and Willie is back serving on it as an executive officer. When the ship is hit by a Japanese bomb, Keefer orders the crew to abandon ship. Willie ignores the order and stays aboard the Caine, saving it. Keefer is discharged and Willie is promoted to Captain. He receives commendations on one hand (the Bronze Star for rescuing the Caine) and condemnations on the other (the decision that relieving Queeg was justified has been overturned, and he’s given a letter of reprimand).

Herman Wouk won the 1951 Pulitzer Prize for Fiction for The Caine Mutiny. He went on to transform The Caine Mutiny into a play. It was made into a 1954 movie by producer Stanley Kramer, and  blacklisted Hollywood Ten director Edward Dmytryk. 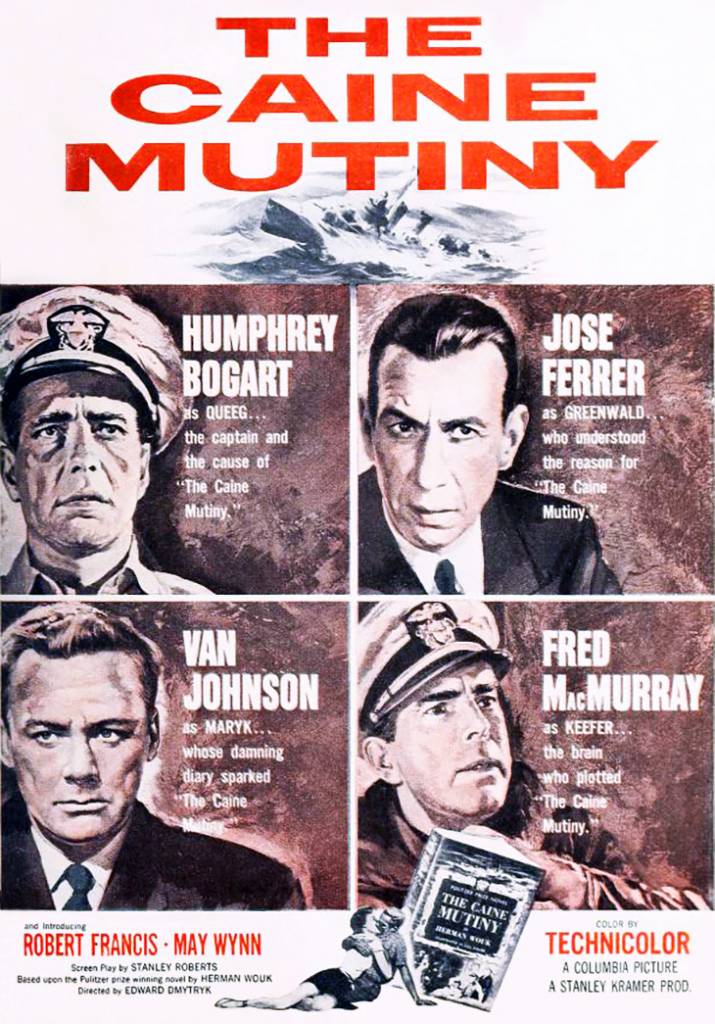 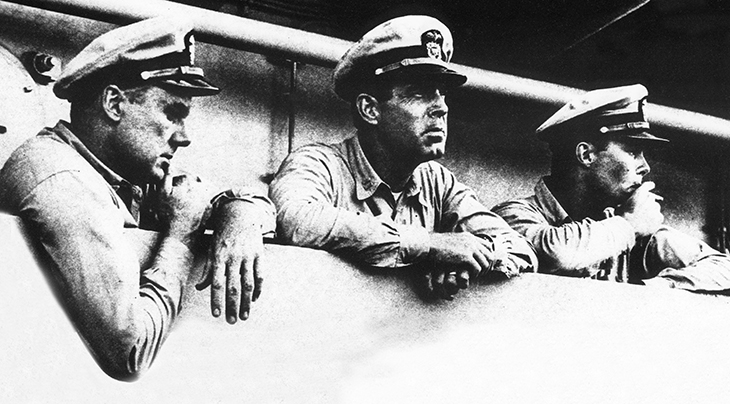 Note: This article was first published in March 2017. It has been updated with new & additional content.