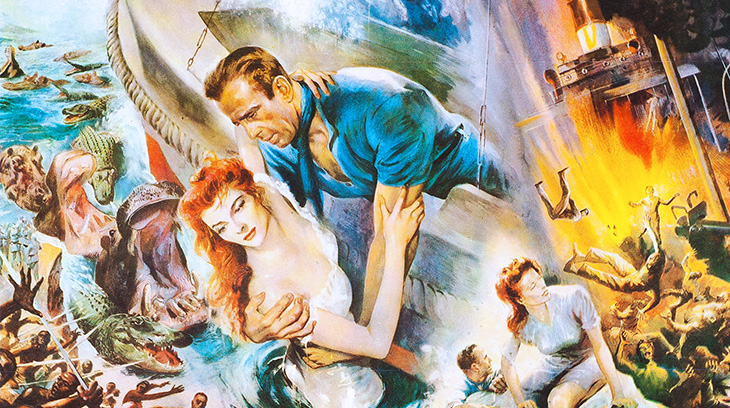 The British-American feature film The African Queen premiered to wide release on February 20, 1952 at the Capitol Theater in New York City. Directed by John Huston (who also had a hand in adapting the screenplay), The African Queen movie was based on a 1935 novel by C. S. Forester.

Charlie helps Rose escape when World War I breaks out and her brother Samuel is killed. Rose and Charlie fall in love as they dodge the Germans. They become separated and are captured and sentenced to death by the Germans; Charlie‘s request to marry Rose before they are executed is honored.

A miraculous explosion occurs when the German boat they are on hits the torpedo-laden hull of the sunken African Queen, resulting in newlyweds Charlie and Rose escaping to safety. Below, The African Queen movie trailer featuring Katharine Hepburn and Humphrey Bogart..

Roughly half of The African Queen movie was shot in England, and the other half on location in Africa. Katharine Hepburn and many of the cast shooting in Africa were sick while filming there.  Humphrey Bogart is said to have bragged that he didn’t get sick because instead of drinking water, he drank gin he’d brought with him. The steamer boat seen in The African Queen movie was restored in 2011 and tourists to Key Largo, Florida can take a private or dinner cruise on the boat. 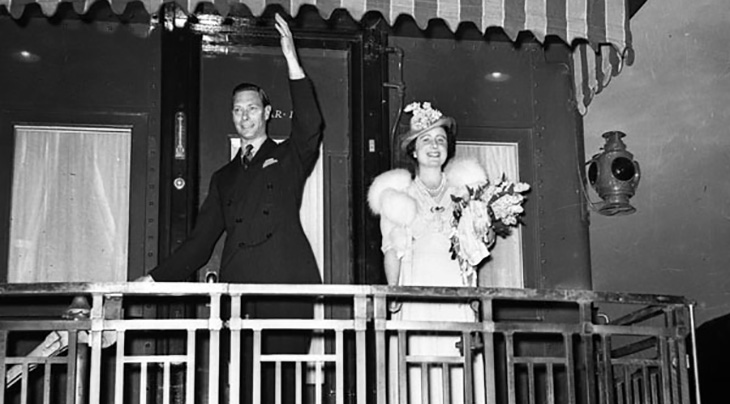 On February 6, 1952, 56-year-old King George VI of the United Kingdom and the British Commonwealth, died in his sleep from a coronary thrombosis. King George VI was a heavy smoker and had developed lung cancer before his death. His oldest daughter Princess Elizabeth (family nickname Lilibet) became Queen Elizabeth II upon her father’s death. 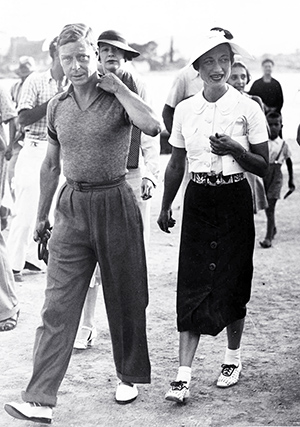 Before his death, King George V prophesied of his oldest son Edward, Prince of Wales:

“After I am dead the boy will ruin himself in 12 months“,

“I pray to God that my eldest son will never marry and have children, and that nothing will come between Bertie and Lilibet and the throne.“

Ten months after becoming King Edward VIII, Edward abdicated in December 1936. In a radio broadcast he explained he could not

“Discharge my duties as King as I would wish to do without the help and support of the woman I love.”

Edward became Duke of Windsor after his abdication and married American divorcee Wallis Simpson in June 1937. The new Duke and Duchess of Windsor remained happily married until Edward’s death in May 1972, age 77. Wallis Simpson died in April 1986 at the age of 89. 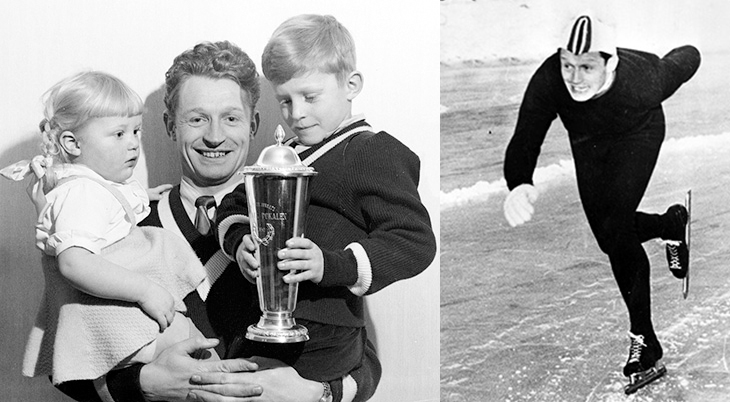 Finn Hodt, a Norwegian speed skater, was not allowed to compete at the games because he had been a Nazi collaborator during WWII.

This sixth Winter Olympic Games in Oslo, Norway in 1952 was the first for Japan and West Germany after World War II had ended. Neither the Soviet Union nor East Germany sent any athletes.

Note: This article was first published in 2017. It has been updated with new & additional content.