Baby boomer, Cheers alum (1987-1993) and Jenny Craig spokesperson Kirstie Alley becomes an official senior citizen today on January 12 2016 and celebrates maintaining her most recent weight loss (50 lbs) for over a year.  Below, Kirstie making a red carpet appearance at the 1994 Emmy Awards. 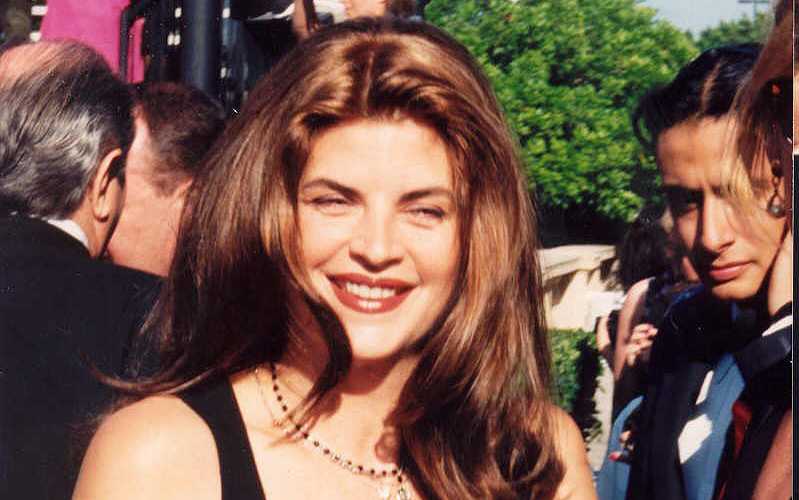 Kirstie Alley has been tabloid fodder for many years as she battled her weight, which has been somewhat of a sliding scale for the past 12 years. In 2011/2012 she and her partner Maksim Chmerkovskiy were the runners-up on Dancing With the Stars, and she lost 100 lbs.

Born January 12, 1951 in Wichita, Kansas, Alley got married at 19 to her high school boyfriend and distant cousin Bob Alley in 1970. She began a career as an interior decorator but she told People Magazine that she snorted up all her profits with cocaine.

The couple divorced in 1977 and Kirstie Alley moved to L.A. She became a Scientologist in 1979 and after entering their rehab program Narconon, was able to kick her 3-year cocaine habit. An interest in acting led her to becoming a winning contestant on Match Game in 1979 (and on Password Plus in 1980). Her acting break came in 1982’s movie Star Trek: The Wrath of Khan, playing a Vulcan officer.

By the time Kirstie Alley’s Emmy Award-winning role on the popular baby boomers television show Cheers as Rebecca Howe had started in 1987, Kirstie Alley had married again, this time in 1983 to actor Parker Stevenson.

Kirstie began a decades-long friendship with fellow actor and Scientologist John Travolta and his wife Kelly Preston. Travolta and Alley first starred together in the Look Who’s Talking (1989) movie trilogy.

Kirstie Alley and Parker Stevenson adopted infant son William True (1992) and baby daughter Lillie Price (1994). When they divorced in 1997, Stevenson asked for spousal support and won a $6 million settlement. Kirstie returned to acting with a starring role in Veronica’s Closet (1997-2000), and began a 4-year romance with 17-years-younger actor James Wilder.

As her relationship with James Wilder ended, and she began her 50+ years, Kirstie Alley’s first battle with her weight began. She went from 130 lbs to over 200 and the tabloids were merciless. Despite her weight fluctuations, Alley has acted steadily in the movies and on television since her 50’s, and as she approached her senior years.

Most recently Kirstie Alley appeared on the self-titled series Kirstie (2013-2014) playing the character Maddie Banks. The Maddie Banks character made a cross-over appearance on the popular show Hot in Cleveland in 2014. In 2015, Alley appeared as herself in the British time-travel reality series Time Crashers.

Below, Kirstie Alley in her Jenny Craig commercial.

Jenny Craig: I’m Back from LRXD on Vimeo.

Now as Kirstie Alley enters her seniors years and has again lost the extra pounds, according to an interview with Dailymail.co.uk, when it comes to dating, Alley “likes the energy” of younger men and considers age 25-28 the ideal age for a romantic male partner.