6 vintage songs – Great Balls of Fire, What’d I Say, Another Place, Another Time, Would You Take Another Chance On Me, Chantilly Lace, Middle Age Crazy – from “The Killer”, rock and roll pianist and singer Jerry Lee Lewis. He would become almost as widely known for his riotous personal life (crime, violence, drinking, drugs, and 7 marriages) as his aggressive piano playing and singing. 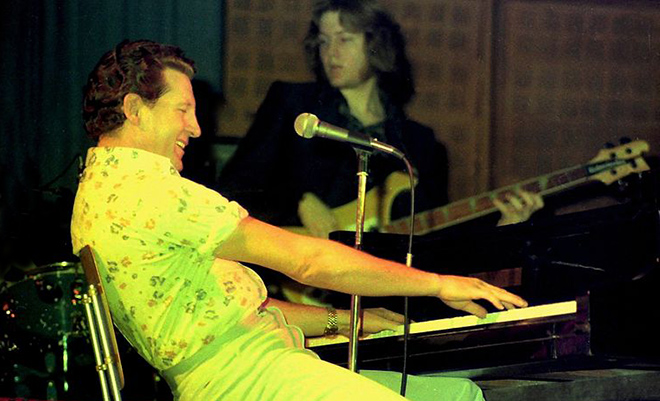 Back in Memphis, Jerry Lee Lewis and Elvis Presley had became friends, hanging out and driving their competing Cadillac cars. Jerry Lee wanted the same level of commercial and critical success Elvis had achieved, and more; he wanted to be bigger than Elvis. Along with the music, they had their Assembly of God church upbringing in common; and both men were popping pills (amphetamines in Jerry Lee’s case). Alcohol was a problem for Jerry Lee’s father, and although Jerry Lee said in his biography he never drank that much, he was a hard drinking man like his father.

Meanwhile, wife #2 Jane (Mitcham) Lewis was still in Ferriday with their sons; Jerry Lee thought that like him, she was finding it hard to remember that they were married, and he was enjoying all the female adulation that came with success. Jerry Lee’s sister had gotten married at age 12, and he’d had a 12 year old cousin who had gotten married the year before. He was spending time with Myra Gale Brown who was now 13 and in his/their eyes, a woman. Jerry Lee filed for divorce from Jane in September, 1957.

Jerry Lee Lewis promptly married Myra in December after obtaining a document that said she was 20 years old. Once again his divorce from wife Jane was not finalized when he married Myra and he was a bigamist. It was nothing really new for the Lewis clan to marry cousins, and Jerry was adamant that women married very young in the deep south. His career was just getting started, performing concerts for $10,000/night, when Jerry Lee traveled to England for a concert tour in May of 1958; his divorce from Jane had just recently been finalized. Jerry Lee was cautioned by Sam Phillips and his brother to try and keep the marriage to Myra quiet, but Lewis saw nothing to be ashamed of and refused.

Jerry Lee Lewis brought Myra and his parents with him on the trip to England. A British reporter got wind of Jerry Lee’s marriage to Myra, their familial relationship, her age (Myra and Jerry claimed she was 15 instead of 13), and the fact that they had gotten married when he was still legally married to Jane, and a scandal erupted. The England tour was cancelled after just 3 concerts. Jerry Lee and Myra returned to the US where they went through an other marriage ceremony, but it was too late to fix the damage done to his career. Below, Myra and Jerry Lee Lewis are interviewed.

Jerry Lee Lewis was blacklisted from most US radio stations for many years. He was still under contract to Sun Records and kept releasing singles, Sam Phillips didn’t want to promote his records. His career was on the skids, back down to playing clubs again for $250/night. He and Myra had son Steve Allen Lewis in 1959, and daughter Phoebe Allen Lewis in 1963; Steve died in a swimming pool accident in 1962, at age 3.

Jerry Lee Lewis did get airplay in Europe and his songs Sweet Little Sixteen (1962) and Good Golly Miss Molly (1963) were Top 40 hits there, while just barely cracking the Top 100 charts in the US. When his contract with Sun Records ended in 1963, Lewis went to Mercury Records (Smash Records division). His initial albums there were not successful, due in part to popularity of the British Invasion music with American baby boomers. However, his live concert album Live at the Star Club, Hamburg (1964) has since been critically acclaimed; at the time, it was not released in the US for legal reasons.

Jerry Lee Lewis began collecting guns, his pill usage escalated, and the women multiplied; he was away touring almost every night of the year. During live performances he’d take out a gun and set it on the piano. Wife Myra would turn up unannounced at his concerts and hotels, where Jerry Lee’s infidelity was obvious. Their marriage was falling apart and she threatened to divorce him.

Lewis married for the fourth time to Jaren Pate in October 1971 and within a couple of weeks they were separated. Jaren’s daughter Lori Lee Lewis was born in 1972 and in his biography Jerry Lee says he married Jaren partly because she was pregnant, but not with his child. The couple lived separately for 8 years before divorcing. His first child, son Jerry Lee Lewis, Jr. died in 1973 when his jeep overturned; he was only 19.

Jerry Lee Lewis mixed with alcohol and firearms proved not to be a good combination. In September 1976 he was holding a gun when it accidentally went off and he shot his bass guitarist, Butch Owens in the chest (Owens lived). Two months later, in November 1976 Lewis was given a gun while at a Memphis nightclub and later decided to go visit Elvis Presley (who had invited him to come over a day or so earlier). Jerry Lee drove his car (with the gun on the dashboard) into the front gates at Graceland and tried to throw a champagne bottle through the closed car window. Elvis had been watching the scene on closed circuit television and the gun was found when the Memphis Police were called. Lewis disavowed any intent to kill Elvis, saying his feelings were hurt that Elvis would be afraid of him; he was charged with public drunkenness and carrying a gun. In his biography Jerry Lee Lewis rails against the injustice of Elvis bringing 14-year-old Priscillia Beaulieu home to Graceland and “hiding” her there for 8 years, finally marrying her when she turned 21…and never getting crucified in the press for it, unlike his own marriage to Myra.

Thanks for your feedback. The photo has been removed as the source could not be verified.

The photo identified as that of wife #4, Jaren Lewis outside Methodist South Hospital in Memphis, TN, is not in fact Jaren Lewis. I am the first cousin of Jaren and Karen Gunn, twins, and l do not recognize this woman pictured with Jerry.

Thanks for your feedback. The photo has been removed as the source could not be verified.