Brigitte Bardot was an uncredited co-producer and the star of Une ravissante idiote/Agent 38-24-36 (1964), a comedy co-starring Anthony Perkins.

Among the over 100 lovers (mostly men but some women as well) that Brigitte Bardot has admitted to, is Brazilian musician Bob Zagury. Bob Zagury and Bardot vacationed in the town of Armação dos Búzios in Brazil in 1964, and there is a statue in Bardot’s likeness there. 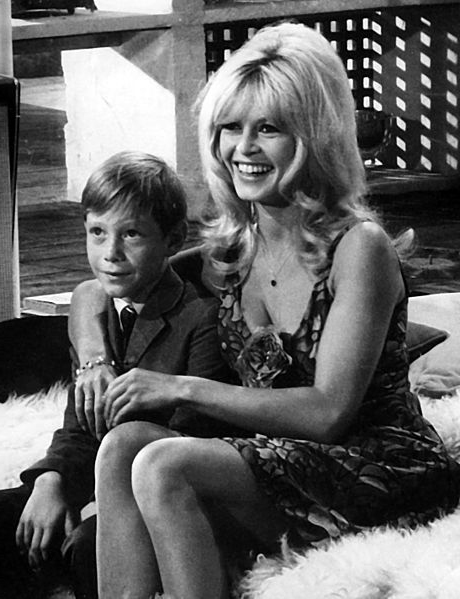 Brigitte Bardot married widowed German millionaire, documentary maker, former Nazi party member and honorary SS officer Gunter Sachs in Las Vegas, Nevada in July 1966; it was her third marriage, his second. Sachs is reported to have romanced Bardot by dropping hundreds of roses from a helicopter as it flew over her Saint Tropez home.

They divorced on friendly terms in October 1969 and remained friends after the marriage ended. Gunter Sachs remarried, and was a septuagenarian senior citizen when he shot and killed himself in 2011 at the age of 78 at his home in Switzerland, reportedly because of Alzheimer’s Disease or a similar condition. 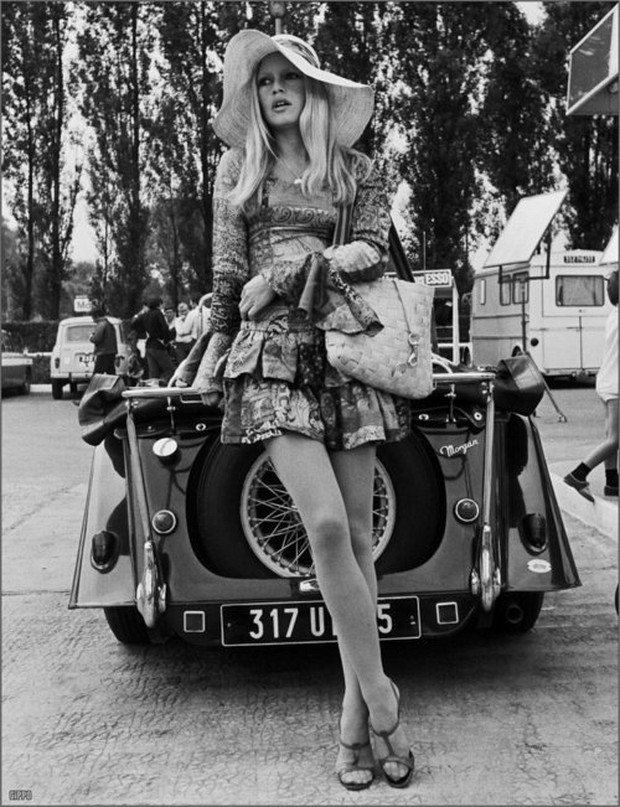 Bardot was nearing the end of her film career when she appeared in the western Shalako (1968) co-starring former James Bond film star Sean Connery, Stephen Boyd, and Honor Blackman.

Below, the movie trailer for Shalako features Brigitte Bardot and Sean Connery.

In 1968 Brigitte Bardot began a new relationship with student/actor Patrick Gilles, who had a small role in her 1970 movie The Bear and the Doll; by mid-1971 she had broken off with Gilles.

In 1972, actor Warren Beatty, who had co-starred with Faye Dunaway in the movie Bonnie and Clyde (1967), also had a very short-lived romance with Brigitte Bardot.

In her book It’s All About the Dress: What I Learned in Forty Years About Men, Women, Sex and Fashion (2011) by fashion designer Vicky Tiel, Tiel recalls attending a dinner in Paris, France with Warren Beatty, Brigitte Bardot, and an unnamed Frenchman. At the end of the meal Bardot stated “Now you three men must race the elevator of my building up to zee sixth floor. Whoever wins gets to sleep with me!” Tiel and Bardot stepped off the elevator on the sixth floor; a red-faced Warren Beatty arrived first and was led by Bardot into her bedroom. The next evening Warren threw a party for Brigitte, but she never appeared; and that seems to have been the beginning and end of their relationship.

Actor Laurent Vergez had a small role on-screen in Don Juan (Or if Don Juan Were a Woman), which co-starred Robert Walker Jr,. Robert Hossein, and Mathieu Carriere – but a larger one off-screen – he too had a romance with Brigitte Bardot. Bardot and Laurent Vergez recorded the duet Vous ma lady (1973) and Tu es venu mon amour (1973). 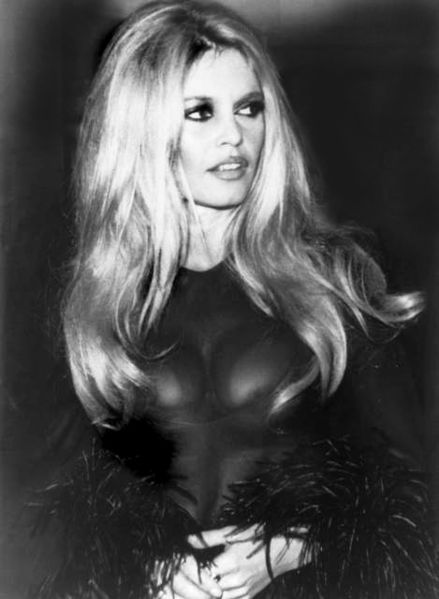 In 1973, 39-year-old Brigitte Bardot retired from acting after acquiring 40+ film credits over her 19 year movie career. The next year Playboy ran a nude photo shoot with her to celebrate her 40th birthday.

Bardot’s love affairs continued through the 1970’s and 1980’s, as did her struggles with depression and suicide attempts fueled by drinking. From 1975-1979 her younger lover Miroslav Brozek, a Czechoslovakian sculptor, lived at her Saint Tropez home.

After breaking up with Bougrain-duBourg in August 1983, on her 49th birthday the next month Bardot took either sleeping pills or tranquilizers with wine and went down to the beach near her home . She was pulled out of the surf and her stomach pumped at a local clinic.

Since then, Brigitte Bardot has concentrated on various animal welfare causes; she is a vegetarian and an animal rights activist, and has protested inhumane treatment of animals in countries across the world. At times she has had 40+ rescued and adopted animals on her Saint Tropez property in France. The Brigitte Bardot Foundation for the Welfare and Protection of Animals was established in 1986. 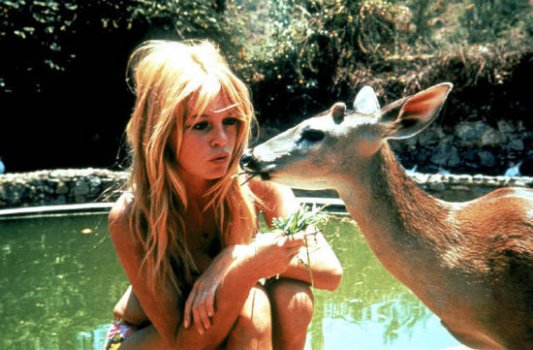 Brigitte Bardot has also written 5 books including her autobiography Initiales B.B. (1996), and has been fined several times for inciting racial hatred with her views about Muslim immigration in France.

It was disclosed to the press in 1985 that around 1983-1984, 50+ Brigitte Bardot was diagnosed with breast cancer. After at first being in denial about it, she underwent successful surgery and radiation treatment for breast cancer in 1984.

In June 1992 Brigitte Bardot met businessman Bernard d’Ormale and they began living together. D’Ormale told People that two weeks after they met, Brigitte had called her estranged son Nicolas Charrier – who had not invited her to his 1984 wedding to Norwegian model Anne-line Bjerkanin – and arranged a visit to Switzerland so Nicolas (and his two daughters Anna and Thea, Bardot’s granddaughters) could meet Bernard. While they were in Switzerland, Brigitte Bardot quietly married fourth husband Bernard D’Ormale on August 16, 1992.

A couple of months later, in November 1992, Bardot once again took an overdose of sleeping pills and had to have be taken to hospital; although her husband said it was not a deliberate overdose and her stomach did not have to be pumped.

Brigitte Bardot wrote her autobiography Initales B.B. (1996), in which she disclosed much of her negative feelings around her pregnancy, impending motherhood, and lack of maternal feelings; she said she would have preferred to have a dog and referred to the unborn baby as a “cancerous tumour”. Her son Nicolas Charrier and ex-husband Jacques Charrier sued her; Bardot was ordered to pay damages to Nicolas for the emotional hurt she caused him, and to Jacques for violation of privacy. The following year, Jacques Charrier’s book Ma Reponse a B.B. (1997), reproduced letters sent by Brigitte Bardot to him during their marriage, and Bardot sued Charrier.

Unsurprisingly, Bardot and her son Nicolas Charrier were once again estranged. In 2009 Brigitte Bardot told Paris Match that “No, I’m not a good grandmother. They (her granddaughters) live in Norway with their father (Nicolas), they don’t speak French and we don’t have the opportunity to see one another.” 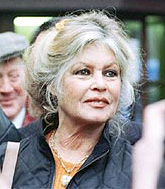 Octogenarian senior Bardot became a great-grandmother in 2014, and her son sent her a picture of the baby; a rare communication. Author Ginette Vincendeau who wrote the biography Brigitte Bardot: The Life, The Legend, The Movies (2014) said that Brigitte Bardot still lived in La Madrague in Saint Tropez, France; she now walked with a cane because of arthritis, but had  refused to have hip replacement surgery.

Below, a look back at a younger Brigitte Bardot in 1956’s …And God Created Woman. 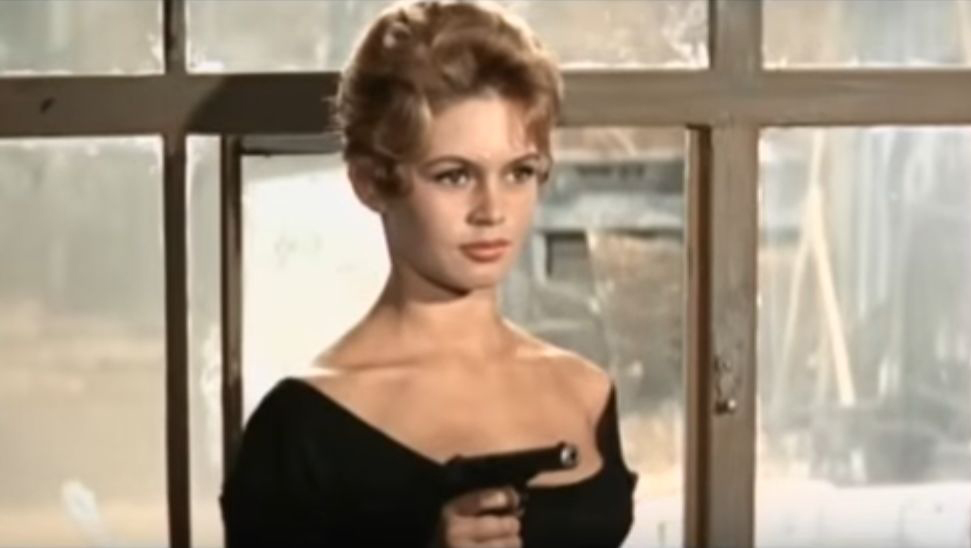