On March 17th when everyone is Irish for a day, there are still lots of ways to have some St. Patrick’s Day fun either at home alone, or with friends. 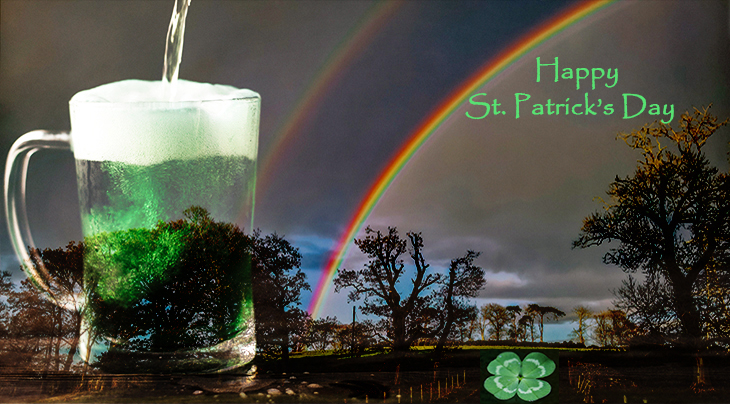 In fact, the Irish-themed ideas below are probably enjoyed to their optimum if you’re a retired (or about to be) baby boomer, zoomer or senior citizen, and have the afternoon before to prepare – or the morning after to recuperate – from a small gathering of close friends and/or family.

Progressive Dinners, from stuffed spud appetizer’s at Tom’s apartment, to cloverleaf-decorated cupcakes and Bailey’s Irish Cream at Joan’s retirement residence, and everything in between. Other traditional Irish dishes to serve could include a yummy Irish stew, corned beef and hash, lamb, steak or beef and Guinness meat pies, or something with cabbage (in a salad or cooked). Tip: A little green food coloring goes a long way in food or beverages!

Charades, Pictionary, or Scavenger Hunts with Irish-themed clues and prizes.

Darts doesn’t have to be a game played exclusively in bars, although it’s sure popular in Irish pubs….get a dart board for your home and keep the drinks to (Irish) coffee, to cut down on casualties.

Name That Tune – play Irish songs (or songs with an Irish connection) and award prizes to the first person that correctly identifies the name of the song…The Irish Rover, Molly Malone and Danny Boy might have early winners. Some favorite Irish recording artists and bands are Bono and U2 – With or Without You; Daniel O’Donnell – Danny Boy; Sinéad O’Connor – Nothing Compares 2 U; Van Morrison – Domino; The Irish Rovers (a Canadian band) – The Unicorn; Gilbert O’Sullivan – Alone Again (Naturally); The Cranberries – Linger; Celtic Thunder – A Silent Night (Christmas 1915); The Pogues – Fairytale of New York; Hozier – Take Me to Church; The Dubliners – The Wild Rover.

Irish Movie Night -Saoirse Ronan, Maureen O’Hara, Pierce Brosnan, Colin Farrell, Brenda Fricker, Gabriel Byrne, Cillian Murphy, Richard Harris…the list of Irish actors appealing to all ages, goes on and on. Serve up a movie with green popcorn (mix a little food colouring into the oil/butter as it’s popping). Enjoy solo or with a small group of friends and/or family. Check out my picks for Best New and Classic “Irish” Movies.

Have some time on your own to curl up with a good book? There are hundreds of Irish writers, these are just a few of my favorites whose books will transport you to Ireland of today or yesterday.

Marian Keyes – a writer of both funny non-fiction and fiction, her contemporary family and romantic comedies all feature strong character development. Her works include Anybody Out There? (2006); Last Chance Saloon (1999); This Charming Man (2008); The Brightest Star in the Sky (2009); The Other Side of the Story (2004), and many others.

Edward Rutherfurd – although he’s not Irish, his historical fiction sagas are absorbing reads, following a cast of characters and their descendants over decades and centuries. Rutherfurd’s Dublin Saga begins with The Princes of Ireland (2004), followed by The Rebels of Ireland (2006).

Laura Kinsale – an English author whose captivating writing style brings her unique historical romances, complex stories, and characters to life. Uncertain Magic (1987) is a blend of mystical fancy and historical facts, set in the Georgian era. Also available as an audiobook with narration by award-winning actor-narrator Nicholas Boulton.

Frank McCourt‘s memoir of growing up in Brooklyn and moving to Limerick, Ireland, makes for a compelling read, and captured the 1997 Pulitzer Prize for Autobiography.

Colm Tóibín – a Booker prize-winning short story writer and novelist, he wrote Brooklyn (2009), which was made into a 2015 movie of the same name starring Saoirse Ronan. Both The Heather Blazing and The Blackwater Lightship are set in Ireland as well.

You won’t likely be able to binge-watch an entire television series or even a mini-series in one night, but there are several TV shows that are either set and/or filmed in whole or in part in Ireland – or are about the Irish experience.

VIkings (2013-2019), a historical saga/adventure drama from the History Channel, following legendary Norse hero Ragnar Lothbrok and his brothers. Filmed primarily in Ireland, as well as a few locations near Sault Ste. Marie, Ontario (Canada) – Searchmont, and Prince. A sequel series has been promised.

You may also be interested in this article about Irish Film Stars in Hollywood: The Percy Sisters.

Note: This article was first published on March 17, 2015. It has been updated with new & additional information.

*This article is for general informational purposes only, and reflects the opinion of the author*