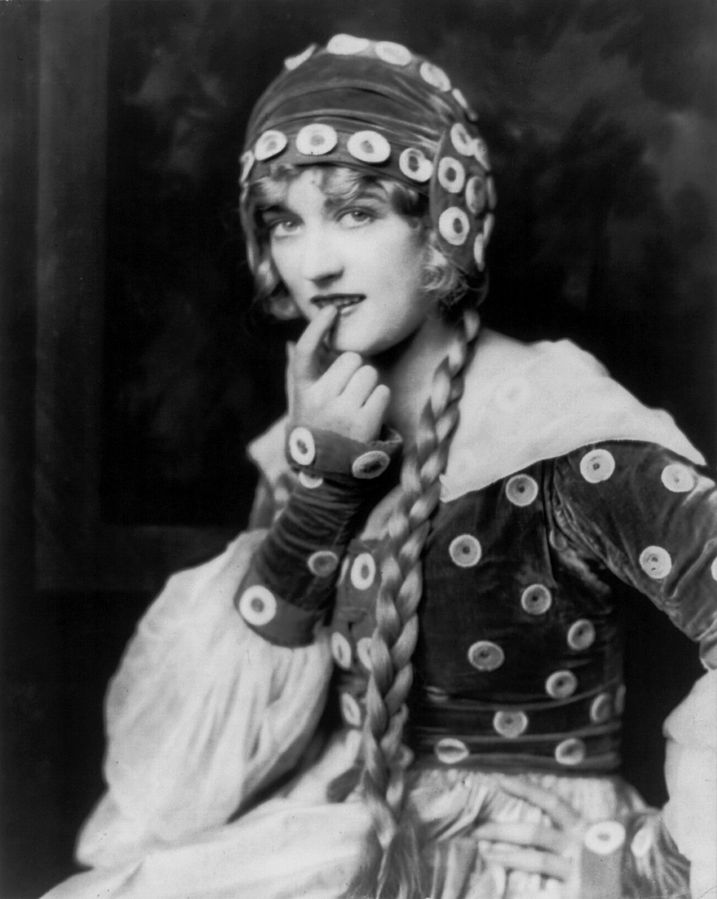 William Randolph Hearst was living in New York City in 1915 with his wife Millicent Hearst and their five sons, when he first saw actress and Ziegfield Follies showgirl Marion Davies. Perhaps not a co-incidence that Hearst fell for a showgirl, since Millicent herself had been onstage in vaudeville when she caught his eye in 1897.

He was quickly enamored, and by 1916 William Randolph Hearst and Marion Davies were having an affair. His marriage to Millicent had grown cold (despite her giving birth to their twin sons in 1915), but she was Roman Catholic and would not (and never did) consider giving him a divorce.

Many of the early silent movies that Marion Davies appeared in – such as Little Old New York (1923) were either written by her and/or produced by either the “Marion Davies Corporation”, or William Randolph Hearst in the credits. 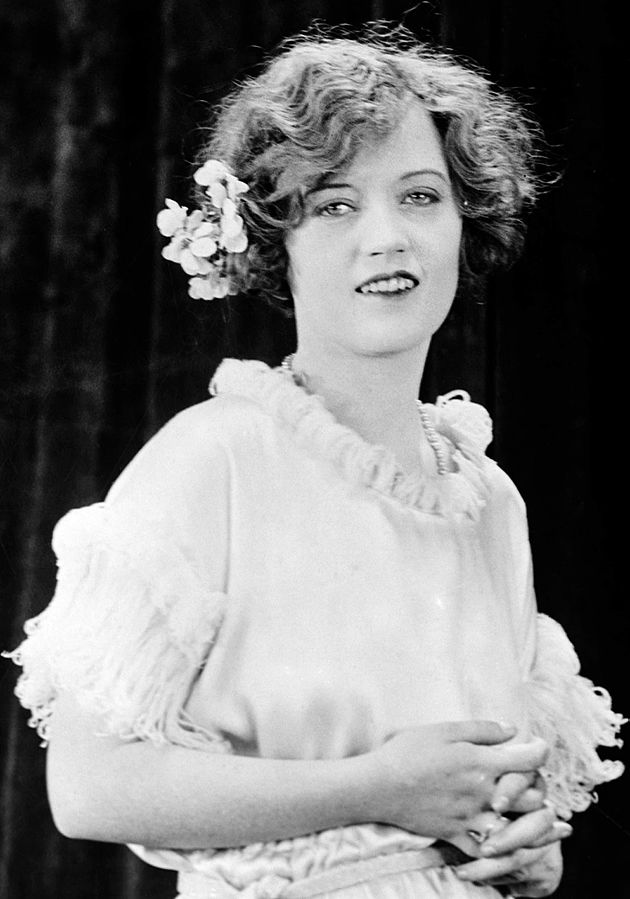 He moved out to California to live on the ranch, and Marion Davies moved in with him; Hearst was then 56 years old and Marion only 22 – a 34 year age difference.

Hypocritically, Hearst had 3 “rules” for his ranch visitors: no bad language; no imported alcohol; no sex between unmarried couples. Marion herself liked to drink, sometimes heavily.

William Hearst was a jealous lover, several times hiring detectives to keep an eye on Marion Davies when he was worried that she might be interested in someone else, such as film director and star Charlie Chaplin, whose admiration of Marion was well known in Hollywood.

Marion Davies had an uncredited scene in The Pilgrim (1923), which starred Charlie Chaplin and his brother Sydney Chaplin.

Rumours abounded around both William and Marion’s roles in what has become known as The Thomas Ince Affair. The legendary silent film director-producer died under mysterious circumstances in 1924, after a party on board the USS Oneida, Hearst’s 200 ft yacht. 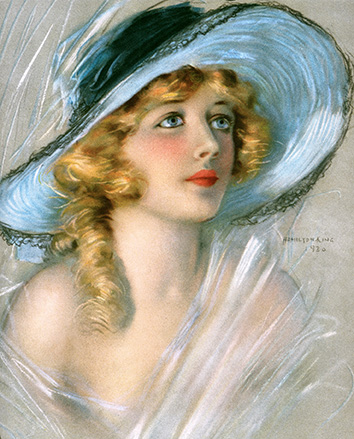 In 1962 St. Donat’s Castle was given to the Governing Body of Atlantic College, and as of 2017, is a functioning international IB private residential college. 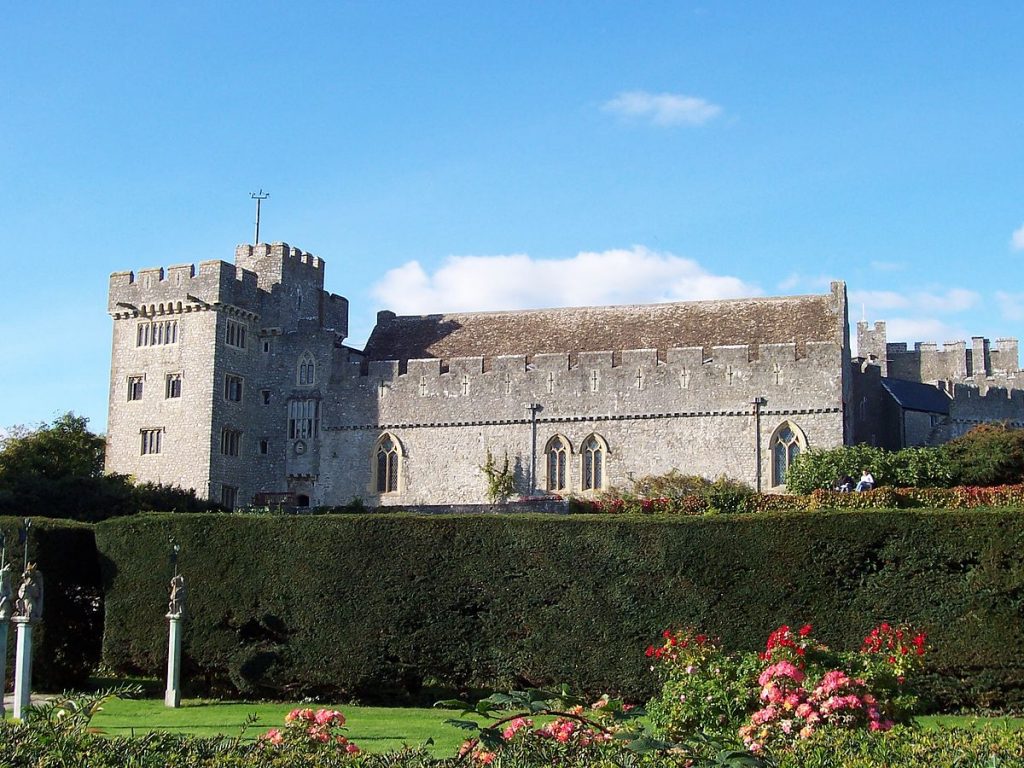 Marion Davies had successfully transitioned to “talkies” in 1928 and her movies made money. By all accounts she had many friends in the movie business and not just because Hearst financed movies; she had a natural beauty, warmth, and was known for generosity to her family, her fellow actors and movie crews, and charities she supported. Over her lifetime, she donated millions to the Marion Davies Children’s Clinic that she founded.

By the late 1930’s Marion Davies’ drinking was getting heavier and her movies were not doing as well. She co-starred with Clark Gable in Cain and Mabel (1936), but filmed her last movie, Ever Since Eve in 1936. Below, vintage behind the scenes film footage of Marion Davies and Clark Gable, for the Cain and Mabel film trailer.

Meanwhile, William Randolph Hearst was now a septuagenarian senior citizen aged 74, and was having severe financial problems. He faced debts totaling $126 million and was forced to sell off a great deal of his art (most of which was in warehouses) and properties. St. Donat’s castle was put up for sale, but there there were no offers. When Hearst’s lawyers told him he desperately needed to come up with $2 million, Marion sold off her jewels, furs, investments and her own property to come up with the money for him.

Orson Welles was a boy genius at age 24 when he moved to Hollywood in the late 1930’s with his wife Virginia Nicolson Welles. Below from left, the cast & crew of the play Too Much Johnson (1938) presented by the Mercury Theatre: Howard Smith, Mary Wickes, Orson Welles, Virginia Welles, William Herz, Erskine Sanford, Eustace Wyatt, and Joseph Cotten. 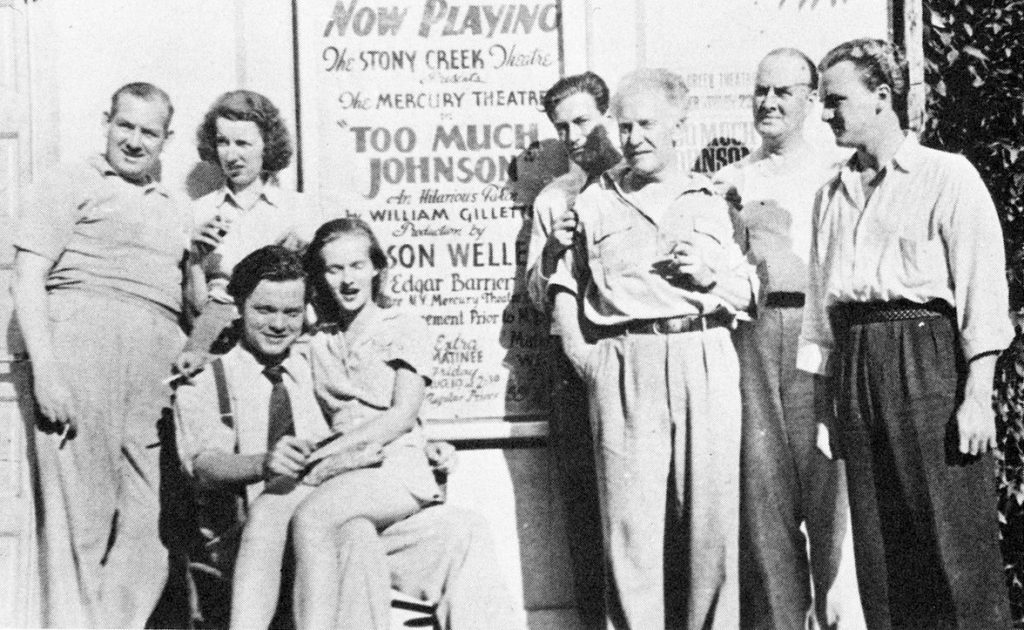 Meanwhile, Orson Welles had a contract with RKO to produce a picture and he had teamed up with screenwriter Herman J. Mankiewicz in 1939, to work on the screenplay for Citizen Kane. Herman J. Mankiewicz had once been friends with Marion Davies, frequently visited San Simeon, and had come to hate William Randolph Hearst. Neither man was disposed to think kindly about either Marion Davies or William Randolph Hearst.

This movie trailer for Citizen Kane includes a statement spoken by Orson Welles…”This is Orson Welle’s…I’m speaking from the Mercury Theatre“….and he goes on to introduce cast members – among others, new to film actor Joseph Cotten, Ruth Warrick, Dorothy Comingore, Agnes Moorehead, and Erskine Sandford. (Both Joseph Cotten and Erskine Sandford had been in the 1938 Mercury Theatre play with Orson Welles and his then-wife Virginia Welles). Below, the Warner movies 70th anniversary trailer for Citizen Kane.

The Netflix original movie Mank (2020) shot in black and white, chronicles the life of screenwriter Herman Mankiewicz, his relationships with Hearst and Davies, and the development of the Citizen Kane screenplay.

The End And What Came After

By 1947 William Randolph Hearst (now a senior senior in his 80’s) began having serious heart problems. He and Marion Davies permanently vacated the Hearst Ranch, moving to a North Beverly Drive house that Marion had bought in 1946 for $120,000 (she gave ownership of it to William Hearst). It was a step down from Hearst Castle; only 29 bedrooms, 3 swimming pools, tennis courts, and cinema…it was listed for sale in May 2015 at $135 million.

When William Randolph Hearst died on August 14,1951 at age 88, Marion Davies was devastated. Knowing his end was near, she had been sedated and put to bed. While she slept, he passed away and his sons and the Hearst committee removed his body, had it embalmed and flown to San Francisco to Hearst’s estranged wife Millicent Hearst’s home. Marion was informed of this when she woke up; she was not even invited to the San Francisco funeral, which was attended by over 1,000 mourners. Marion Davies and William Randolph Hearst had been together for over 34 years. )

Within 3 months of Hearst’s death, Marion Davies married Horace Brown Jr., a former fiancee of Marion’s sister Rose. Horace had been a frequent visitor to the Hearst home, was well liked by both Marion and William, and looked quite a bit like Hearst. After William Randolph Hearst’s death and her marriage to Horace, Marion’s consumption of alcohol and bouts of depression increased. Although she was well off financially due to her real estate investments, her health began to suffer. Marion Davies had a stroke in 1956, and died of cancer on September 21, 1961 at age 64.

In 1993 Marion Davies’ niece Patricia Lake died. As requested by Lake, after her death her son announced that Patricia was actually Marion’s daughter by Hearst. She had told him that around 1920, Marion Davies became pregnant and was sent to Paris, where she gave birth to Patricia. Marion’s sister Rose had given birth to an infant that died around the same time, and so Rose and her husband George Van Cleve raised Patricia Lake as their own daughter. Patricia Lake claimed that Marion Davies had told her she was her mother, and William Randolph Hearst was her father, when she was 11 years old; and that Hearst himself told her on her wedding day (where both Marion Davies and William Hearst gave her away to her new husband Arthur Lake), that he was her father.