50+ World > Entertainment > Biography > What Was New in November 1952?
Biography

News Headlines & Entertainment Trivia from November, 1952: John Steinbeck’s East of Eden is the #1 best seller; classic movie premiere of The Turning Point; and the #1 hit song is Why Don’t You Believe Me? sung by Joni James

Beginning November 2, 1952, John Steinbeck’s modern classic novel East of Eden sat atop the fiction best seller list, and stayed there for 8 weeks. Steinbeck is said to have considered East of Eden his masterpiece, a culmination of everything he had learned about writing. 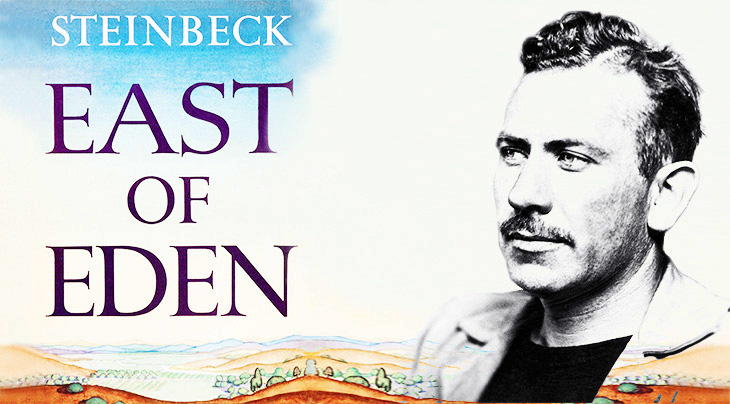 East of Eden was first published in September 19, 1952, and was an instant bestseller, staying on The New York Times #1 Fiction Best Seller list for more than a year. In November of 1962, it knocked Thomas B. Costain’s The Silver Chalice from the top spot on the list.

A epic literary saga of two families, East of Eden’s central themes are the dynamic of two brothers – Charles and Adam, then Caleb and Aron – the struggle of human nature between good and evil, and the parallels between the biblical tale of Cain and Abel.

Set in author John Steinbeck’s beloved Salinas Valley (where he grew up), East of Eden begins with the establishment of two different families in the valley. Irish immigrant farmer and inventor Samuel Hamilton settles in the valley with his wife, and they raise 9 children there.

Wealthy stranger Adam Trask arrives in the valley and buys a big ranch, settling there with his pregnant wife Cathy. Adam’s backstory is told….his father was Civil War veteran turned Washington military advisor Cyrus Trask. As a child, Adam didn’t get along with his younger brother Charles, who picked on him. Adam left home as a young man, joined the army, and wandered around the country before returning home to discover their father died and left each of the brothers $50,000. Soon after, Adam and Charles discovered a badly beaten young woman – Cathy Ames – on their doorstep. Charles instantly saw through Cathy’s pretty exterior to her ugly nature, while Adam fell blindly in love and married her. Although Cathy married Adam, she seduced Charles, and tried an unsuccessful abortion when she discovered she was pregnant.

Adam doesn’t believe Cathy when she tells him she doesn’t want to live in the valley, nor to be a mother. After she gives birth to twins boys – Aron and Caleb – she shoots Adam when he tries to stop her from leaving. Adam raises his two sons with the help of his Chinese cook Lee and his good neighbour Samuel Hamilton.

Cathy has become the madam of a brothel after changing her name to Kate Albey and murdering the previous madam. When Charles dies, Adam finds Cathy to give her money that Charles left to her in his will. He never tells the boys what became of Cathy or where she is.

Samuel and Adam grow older while the twins grow up and become young men. Conflicts arise as they try to find their way in the world, and Cathy/Kate once again enters their lives when Cal finds her. As the plot of East of Eden unfolds, the brothers struggle within themselves, with each other, their father, their mother, and for the love of a young woman (Abra).

So enduring are the themes in East of Eden that it has continued to sell well, becoming a modern classic studied in school and even reaching the #2 position on the best-seller lists in 2003,  thanks to being a selection of Oprah’s Book Club.

Television and film adaptations of John Steinbeck’s East of Eden: 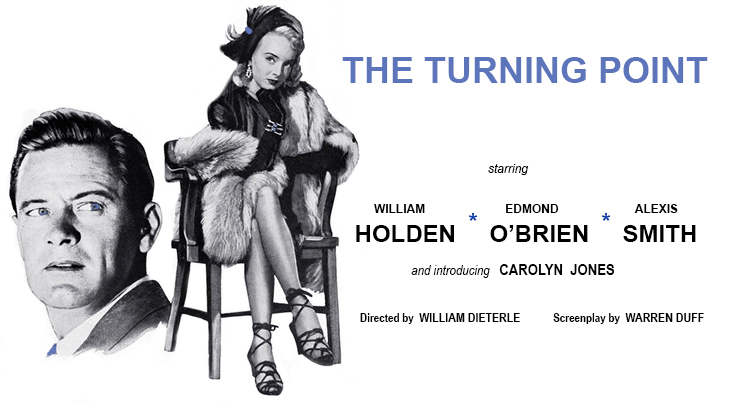 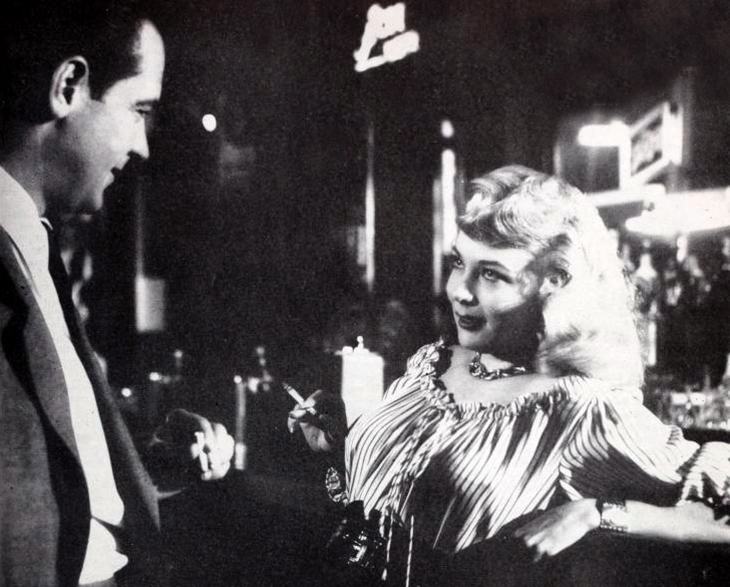 Jerry is soon trying to help the prosecuting attorney, D.A. John Conroy (Edmond O’Brien), in his attempt to take down a crime syndicate headed by boss Neil Eichelberger (Ed Begley). 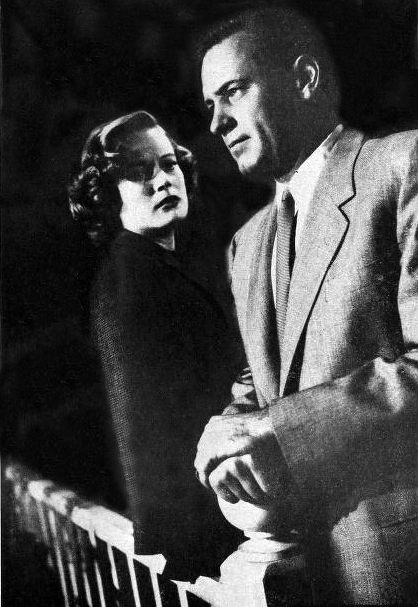 When Matt is prevented from testifying by the mob, it’s a “turning point” for the investigation.

Among the other supporting cast members of The Turning Point are perennial tough guy Neville Brand, Howard Freeman, and Ray Teal as Clint, a police captain. 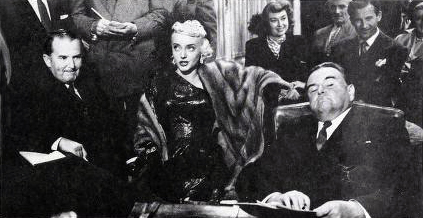 Although William Holden was the bigger “star” at the time and received a lot of publicity (he was fresh off his success in Sunset Boulevard), The Turning Point is really Edmond O’Brien’s movie. 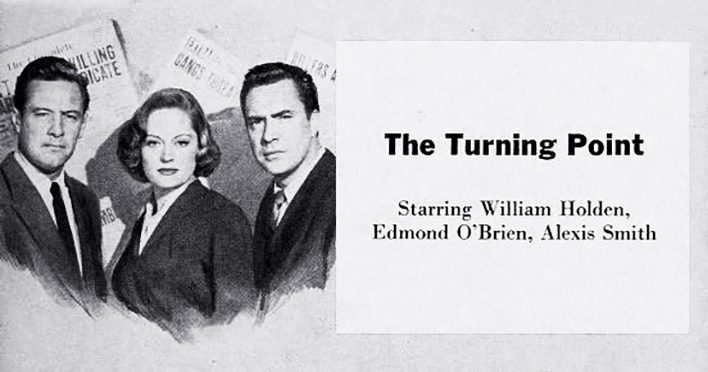 The Turning Point was filmed at Paramount Studios in Hollywood, with some location shots around Los Angeles that include Bunker Hill, the Angels Flight Railway, Olympic Stadium, and the Hotel Belmont.

Horace Duff’s screenplay is based on a story by Horace McCoy. The film-noir “look” of this classic movie is aided by designer Edith Head’s costumes, and dramatic “noir” cinematography by Lionel Lindon.

Singer Joni James recording of Why Don’t You Believe Me? broke into the #1 spot on the Billboard hits chart the last week of November, 1952.

Why Don’t You Believe Me? shared the number one position for that week with the novelty comedy recording It’s in the Book by Johnny Standley, then claimed the #1 spot all by itself for the next three weeks. 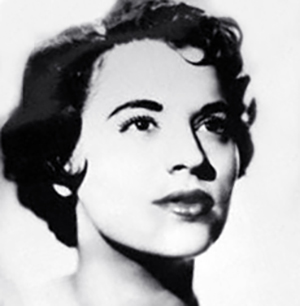 Singer Joni James (nee Giovanna Carmella Babbo on September 22, 1930) started her career in entertainment as a ballet dancer and chorus girl. She was noticed by M-G-M executives in a commercial and was signed in 1951.

Variety reported that Toni James was now being managed by M-G-M’s musical director, conductor Tony (Anthony) Acquaviva, in May 1953. A few years late, Tony Acquaviva and Joni James were married (1956).

Tony Acquaviva and Joni James were married in 1956, and by May 1963 had adopted son Michaelangelo from an orphanage in Italy, followed by the adoption of a daughter Angelamia. James retired in 1964 to care for Tony; in a 1995 interview at Capitol Records Studio, James said that he had been in ill health and in a wheelchair for many years. Tony Acquaviva died in 1986.

After a 30-year absence from recording and performing, Joni James began touring again in the mid-1990s. She married retired Air Force General Bernard Adolph Schriever in 1997; General Schriever died in 2005. James told reporter Dave Newhouse that as of 2010, she was a grandmother and after some falls, using a walker.