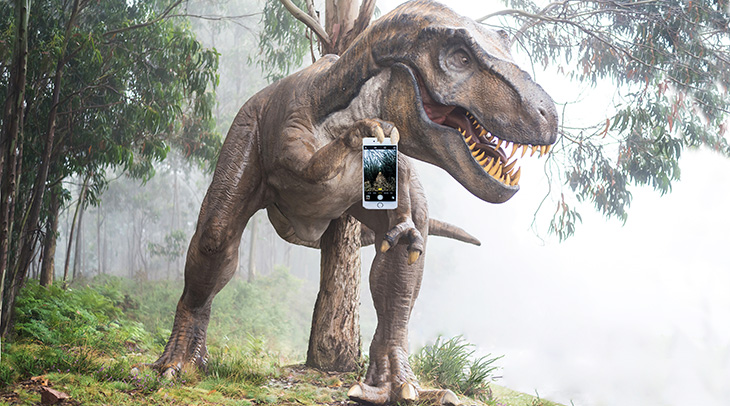 But just like flip phones and digital cameras have morphed into smartphones, rear projection big-screen televisions and VHS VCR’s have given way to flat screen smart TV’s and PVR’s, I have finally taken the technology leap into the social media mysteries & nightmares of Pinterest, Twitter, and last but not least, Instagram.

Fear not my lonely follower, I’m not leaving Facebook‘s 2.23 billion users, or LinkedIn and it’s 294 million business-minded followers. I’m just finding out what all the fuss is about, and why Twitter, Instagram, and Pinterest, have such huge monthly audiences:

Instagram – over 1 billion fans, growing by leaps and bounds 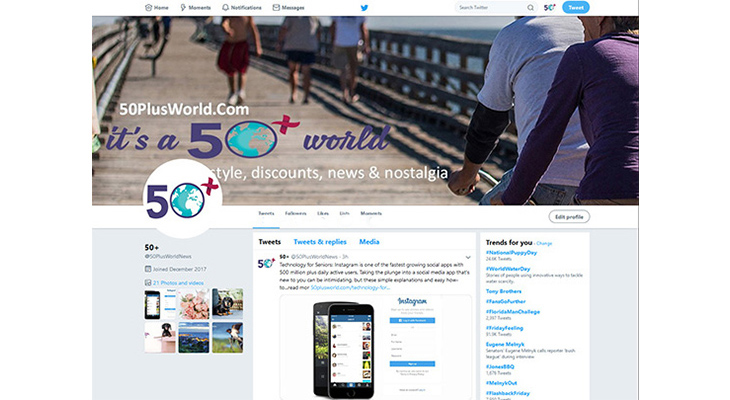 Having decided I wanted to play with the other kids in the big kid social media pool, I ventured into the mystery of Twitter first. It’s been around since 2006, so it only took me 13 years. And after all, I reasoned, if you’re limited to 280 characters (up from the previous 140), it couldn’t be that complicated.

My knowledge of Twitter had previously been confined to a funny “Tech Lesson” video, and news-worthy monumentally stupid tweets from an infamous dolt. Neither of these had enticed me into venturing onto Twitter myself. But hey – there are 335 million Twitter users – and they can’t all be idiots, right?

Truth be told, it was actually quite easy to set up Twitter (well duh, if so-and-so can use it, it would have to be), even for me. After installing a cool new plugin for sharing directly from a website to social media, with a couple of clicks and fields entered, I was ready for my first real tweet.

It was earth-shattering, believe me. No really, I sent out a tweet and waited for the universe to notice. Still waiting, but it’s only been a few months now. I’m sure someone will realize how scintillating my tweets are, some day soon…

My daily challenge with Twitter is to be brief. I am by nature a story-teller with a fondness for excruciating detail to ensure my reader gets the full, exhaustively complete picture. Twitter, not so much – apparently the average tweet length (from other users, of course) is less than 50 characters.

In the past I couldn’t ever imagine being able to confine myself to less than 280 characters, let alone say anything coherent or meaningful. Not that I’m saying I’ve mastered that yet either, but at least I’m in the game. And that’s what social media is if nothing else – it’s a way to be “in the game” today online, interacting with other people (or in my case, person, LOL). I’ll try to not to fulfill my worst fear and become an Twittering idiot, but I fear it’s already too late.

You can check out my tweets and follow me at Twitter.com/50PlusWorldNews.

And if you enjoy humour and would like some more “twitter how-not’s), you may like these tips from Bob at Team Coco: Conan’s Senior Tech Lessons 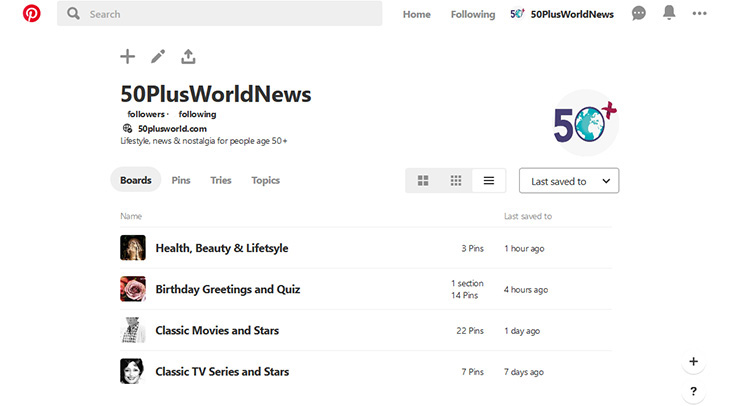 Pinterest is cool if you’re a visual person and like to organize things, so it’s right up my alley. I’ve seen lots of pictures from Pinterest turn up in Google image search results, and thought it would be a good place to be. I usually create or modify sourced images to accompany my articles, and this would give me another place to share them, in an organized way on “boards” (Pinterest’s digital version of a bulletin board).

My oldest daughter (in her early 30s) avoids all social media except for Pinterest, so I checked in with her to confirm what she uses it for and why she likes it. She’s on it to find pics of appetizing meals & recipes, household time-saving or space-saving items, clothing, etc.

I decided if she – who doesn’t even use Facebook! – can use Pinterest, so can I. Pinterest was launched in 2010, so I’m only 9 years behind the times.

When I joined Facebook back in 2010 (only 4 years late to the game) to play Farmville, my kids already didn’t think it was “cool” anymore.

I took the Pinterest plunge. Over a full morning, I listened to a podcast, watched an expert’s video, and finally understood enough of the basics to get started.

I really wish I’d first re-read this great article Technology for Seniors: Pinterest before I did all of that, because it would have clarified things immediately and shortened my learning curve. This tip can’t help me now, but it might help you if you haven’t already mastered Pinterest yourself.

Organizing pins onto boards can be a multi-step process when you first get started, but when you understand how to do it, it’s pretty straightforward. Having said that, as a person who writes website posts on their computer and wants to save time for other important stuff, if I hadn’t found a plug-in that would share directly from my website article to a Pinterest board for me, I’d still be waiting to join the Pinterest cheerleading team. Now all I have to do manually is enter text up front, and with some minor modifications after it’s posted on a board, it’s good to go.

I’ve been “pinning” for about a week now, and already have more than 1 follower on Pinterest! Woo hoo! World domination of Pinterest can’t be far off. Wish me luck!

Pinterest Update: A couple of days after writing the above, Pinterest temporarily suspended my account with a delightfully vaguely worded email reason: “suspected spam”. A day later I got a Pinterest “Pinbot” (yes this was the actual email name/address), email informing me that my account was permanently suspended due to “spam”. Guess what I think emails coming from a “Pinbot” are?

After following a tip to lodge a complaint and 2 weeks of back and forth emails, my Pinterest account was re-activated. By then of course I’d lost the Pinterest follower’s I’d gained before it was suspended. Several more weeks went by, and finally it was confirmed by Pinterest that the reason my account was suspended was because of that great tool I’d been using, something of which triggered Pinterest’s spam filters. They have never responded to my request to resolve this issue or provide specific details, so every day I faithfully take the extra steps to post manually to Pinterest, although I’m still not sure why I bother. It’s probably that elusive promise of “250 million” dangling in cyberspace that I can’t get out of my head.

You can check out my pins and follow me at Pinterest.ca/50PlusWorldNews. 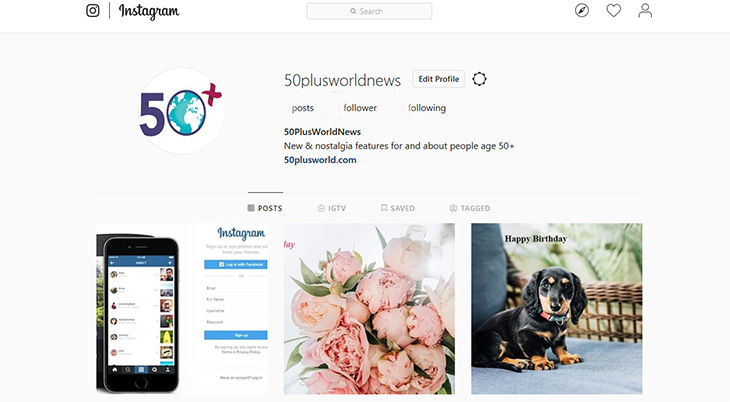 Insta-nightmare, as I called it at first….Well not really, but it definitely wasn’t as easy to set up Instagram as it was the other social media apps. That’s because I’m a tech dinosaur who likes to do everything from their computer, vs a cellphone or tablet.

Although I do have a smartphone, I’m convinced it’s only for outgoing emergency calls or texts when I’m not in the house, while the tablet is for playing spider solitaire while I watch TV, or read in bed or the car (as a passenger). This is an improvement on my husband’s mindset – he doesn’t even know where his cellphone is – ever!

One of the articles I read before getting started on Instagram advised that some features wouldn’t be available when accessing it via computer vs smartphone. I assumed that meant it was only an option, with some restrictions. Days later, I finally understood it’s not really an option at all to set up Instagram using your computer.

Use your phone to set up Instagram and save yourself a lot of time and trouble. Don’t resist giving it your cellphone number or allowing it to access Facebook, and you’ll possibly save yourself the same number of days – 4 in all – it took me to complete my Instagram account set-up, so I could integrate it with that cool plug-in I mentioned before. Once I relented and used my phone and said sure, what the heck, connect to my Facebook – my Instagram account set-up was complete.

Save yourself some time on the Instagram learning curve and read this article before you get started: Technology for Seniors: Instagram

You can check out my pics & stories, and follow me at Instagram.com/50PlusWorldNews.

Having that website plug-in I mentioned before is critical for me, since I don’t have time to spend individually posting to every social media app I want to share on…and I’m very limited in what I can do on my phone (copy/pasting is still beyond me). There are lots of apps out there – so read the reviews and do your homework. And be aware that using a plug-in could cause a problem on a particular social media platform (not just Pinterest).

Investigate the demographics for each social platform you’re on or thinking of joining, to see if you have a hope in you-know-what of reaching the folks you’d like to connect with on there.

*All photographs & text in this article are © 2019 Anita Hamilton / 50+ World unless otherwise noted. All rights reserved. Do not download or reproduce without written permission.*

**This article is for general informational purposes only. 50+ World does not endorse these social media platforms & resources, nor does it receive remuneration from them.**