5 songs (1965-2013) featuring Mountain‘s Leslie West– Oh Those Eyes, Mississippi Queen, Theme for an Imaginary Western, Fade Into You, and a duet of When A Man Loves A Woman with Johnny Lang.

“When I was a kid, my uncle, Will Glickman, wrote for television, including the Jackie Gleason Show…I wanted to see Jackie Gleason live, so my grandmother took me to the TV studio, but when we got there, we found out that the Dorsey Brothers were filling in for Jackie Gleason and he wasn’t there. I actually started to cry I was so upset, but we stayed anyway, and there was this singer appearing that night with a guitar and a band. His name was Elvis Presley. Once I saw Elvis, I knew I had to have a guitar.“

Leslie West started playing guitar at age 13 in 1958, and bought a 1956 Stratocaster guitar with his bar mitvah money. The first song he learned to play was Elvis Presley‘s Heartbreak Hotel, which he played at a junior high school talent show. He wasn’t in high school long because he had no interest in learning anything except how to play guitar. Soon after their parents divorced, baby boomer Leslie (now in his mid-teens) and his younger brother Larry changed their last names to West; Leslie also quit school and began working in New York’s diamond district before gravitating to a career in music. 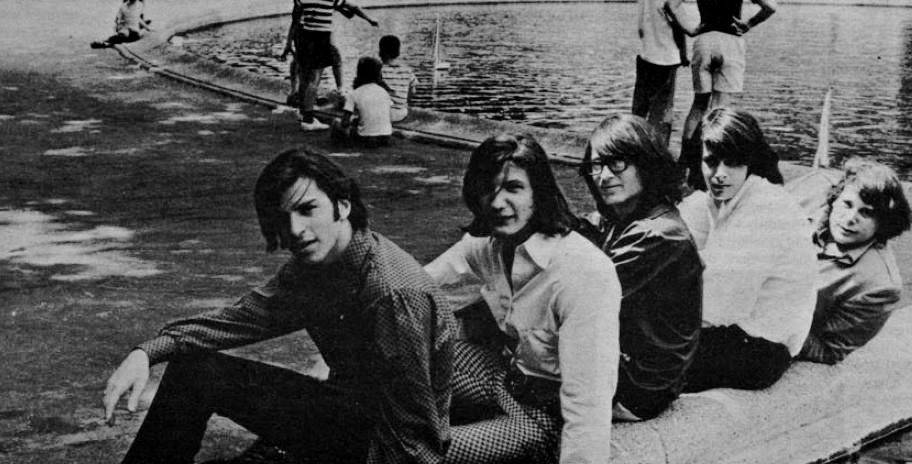 In the early 1960’s, Leslie West was a friend of and influenced by, popular New York band, The Rascals. Accompanied by his brother Larry on bass guitar and vocals, and friends Peter Sabatino (lead vocals, harmonica and tambourine), Jay Storch on organ and Roger Mansour on drums, teenager West (above far right) formed his first rock/soul band the Vagrants in 1964. The Vagrants were popular in the New York City area, mostly singing cover songs. The Vagrants signed with different labels, eventually coming to the attention of bass guitar/vocalist and Cream producer Felix Pappalardi at Atco Records; however unlike The Rascals, they were unsuccessful in scoring a big hit single.

Leslie West left the Vagrants in 1969 to record a solo album Mountain, which was a nickname bestowed on him based on his size. West has had other names bestowed on him by fans including “King of Tone” for his unique guitar sound, and “The Fattest Fingers in Rock and Roll”, again alluding to his large frame. Later that year vocalists Leslie and Felix Pappalardi founded a new hard rock band called Mountain; one of their earliest live shows was at the 1969 Woodstock Festival.  Below, a live Woodstock Festival recording of Mountain performing Theme for An Imaginary Western, written by Jack Bruce (Cream).

Felix Pappalardi and Leslie West were joined by Canadian Corky Laing on drums and Steve Knight on keyboards. Mountain’s first, biggest and most enduring hit Mississippi Queen (1970) was written primarily by Laing and West, although Knight and Pappalardi also contributed. Mississippi Queen made it to #21 on the Billboard US charts and has been has been covered by numerous other artists since then.

In 1972 Felix Pappalardi left Mountain to focus on producing music for other bands. Leslie West has said in several interviews since then that the combination of drug use among band members including himself (cocaine and heroin), and issues with Felix’s wife Gail Collins (who would end up killing Felix in 1983 in a self-proclaimed gun accident) led to the demise of Mountain the band.

Mountain briefly reformed in 1973 and broke up again in 1974 (drug use and in-fighting between band members). Leslie West told reporter Jason Brecht in 1979 (full article here) that he had to take a couple of years off to get his head together.

In 1985, with his drug habit kicked, Leslie West and Corky Laing resurrected Mountain (minus Pappalardi) and the band continued to tour and record albums including their last one, Masters of War (2007).

Over the decades since Mountain debuted, in addition to working on numerous solo albums and concerts, Leslie West has collaborated with other artists and groups on their albums and on tour, including Bo Diddley, Ian Gillan (Deep Purple), The Who, and many others. In the 1980’s West turned to television, films and radio appearances. A role in the Tom Hanks comedy The Money Pit (1986) was followed by voice acting in Beast Wars Transformers (1996-1999) during his 50+years. Leslie West has also made many appearances on the Howard Stern Radio Show.

Leslie West was inducted into the Long Island Music Hall of Fame at age 61 in 2006. The band West, Bruce and Laing reunited briefly in 2009 with Malcom Bruce (Jack Bruce’s son) filling in for his father on bass guitar; they toured North America and the UK. A perennial favourite with baby boomers, Mountain also performed in 2009 at the Woodstock 40th Anniversary Concert in Bethel, New York. In a surprise to the crowd that night, 63-year-old Leslie West married Jenni Maurer (26 years his junior) onstage.

In his senior citizen years, West’s “how-to” DVD for guitar playing, Big Phat Ass Guitar (2011), was released. Always a big man, West battled with diabetes and lost his lower right leg to complications from diabetes in 1961. In a 2014 interview with Joe Raniere for Glide Magazine, Leslie West reflected on the double-whammy impacts of smoking and diabetes:

“Thank God I stopped smoking several years ago too. It’s a good thing that I did, but if I stopped smoking (earlier) it could’ve saved my leg. Diabetics have blocked arteries, blocked veins. That smoke, as doctor described it, “You might as well throw rocks at your feet.”

Leslie West returned to performing live in 2013 and released a new album Still Climbing, which features duets with Johnny Winter, Dee Snider (Twisted Sister), and a cover (below) of Fade Into You, written by Trevor Rosen, Shane McAnally and Matt Jenkins for the television series Nashville. Below, Leslie West singing Fade Into You.

In a 2013 interview with Dave Swanson for Ultimate Classic Rock, Leslie West commented on the difficulties he faces with live performances today due to his prosthetic leg.

“There are no tour buses that handle handicap and wheel chair, and I’m not used to the prosthetic. My balance is really terrible…So I have to sit down when I play, but what else are you gonna do? Everybody gets knocked down in life. It’s how you choose to get up.”
Despite being a senior citizen, diabetic and amputee, Leslie West is not letting his age or anything else keep him from the music he loves. Although he has stated there are no plans to resurrect Mountain again, West’s 17th solo studio album Soundcheck is due out November 2015 and will once again feature guest artists Peter Frampton and Brian May (Queen).